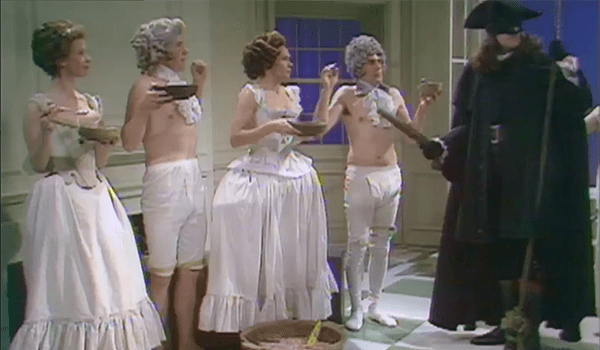 We’re all big geeks and long-time fans of Monty Python around here at Frock Flicks HQ. One of the great things about Python, both the TV series and the movies, is how often they worked in historical and literary bits into their jokes. After all, the members were quite erudite, half having met at Oxford, the other half having met at Cambridge. Many of their comedy sketches made use of the BBC costume wardrobes to good effect, and their first two feature films were surprisingly decent period efforts. But it’s the wordplay, weaving historical fact and literary allusions in with contemporary concepts that make for hilarity.

There are more well-known sketches, but I thought I’d pick some slightly obscure ones for today’s top five. Enjoy!