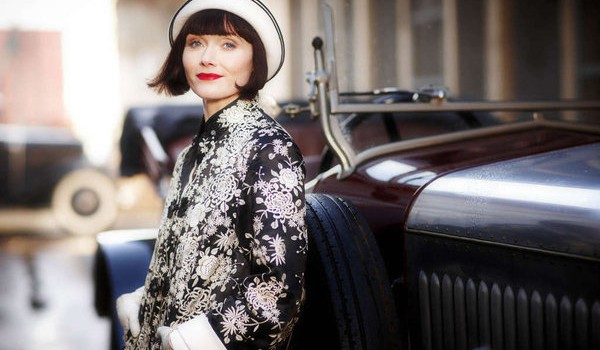 A friend recommended I check out this series, which I found on Netflix (it’s also available on some PBS stations). Miss Fisher’s Murder Mysteries was made in Australia and has two seasons, which aired in 2012 and 2013. A third season finished filming in January 2015 and will premiere later this year (though no word yet on when it comes to the U.S.). The story is based on a series of novels by Kerry Greenwood, all about a feisty, female detective named Phryne Fisher in 1920s Melbourne. 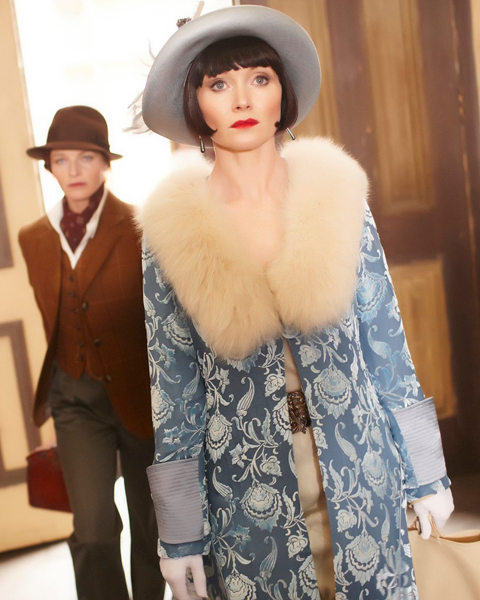 Miss Fisher (played by Essie Davis) is thoroughly independent, both financially and in spirit. In the first episode, she climbs a building’s wall and merely pauses to adjust her hat. She and her practically cross-dressed doctor gal pal joke about ‘wondering wombs,’ and Phryne goes through lovers like a hot knife through butter. Phryne creates a family of wayward folks about her, including a young and religious lady’s companion (who is only mildly shocked by Fisher’s lifestyle), an orphan she raises as her daughter, and a pair of cabbies who help her solve crimes, plus the local detective she flirts with / annoys.

The mystery stories are engaging and not-always predictable — some of the settings are quite intriguing, such as a circus, a Turkish bath, a back-alley abortionist, a fashion show, and a human-trafficking ring. Phryne and her doctor friend, Mac, are definitely feminists, and even her cabbie pals are a bit of vigilantes. Together, they’re all fighting the good fight in a way that’s a touch more modern than period, but not jarringly so.

Why do I call this show “1920s on a budget”? Because I made the mistake of watching the first couple episodes right after watching a new ep of Downton Abbey. Yes, Miss Fisher has a big budget for an Australian TV show, and IF Magazine reported in 2012 that the series spends about $1 million per episode. The Australian dollar has been valued a bit under the U.S. dollar historically, so this equals around $800,000 per episode.

For comparison, The Telegraph, in covering Downton Abbey‘s fifth season, filmed in 2014, reports the show spends £1 million per episode. That’s would be at least $1,500,000 in U.S. dollars. To further compare, the recently ended contemporary American show Breaking Bad cost $3 million per episode to produce, which Variety said was the “high end of most basic cable dramas.” And then Game of Thrones cost at least $6 million per episode in 2012. So, while historical costume series get the short end of the stick, Australian ones are really working on a budget; Fisher spends a little over half of what Downton does per episode.

Now that we’ve had our economics lesson, we can better appreciate how costume designer Marion Boyce creates the look for Miss Fisher’s Murder Mysteries. The show does a fantastic job at creating a period feel and immersing you in 1920s Melbourne, from the seedy backstreets to the posh drawing rooms. Unlike at Downton, we meet a range of people from different socioeconomic backgrounds and go to a greater variety of settings with Phryne. So the costume and art department have to work extra hard to create a bigger, more complicated, more detailed world, and on a much smaller budget. 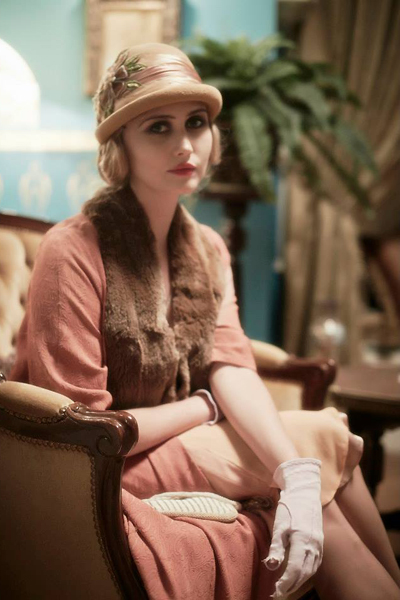 Notice the holes in her glove — this series covers all aspects of society.

Since it’s my job to nit-pick, I can see where they’ve used matte paintings to fill in the scenery and how secondary characters’ gowns in, say, a party scene are just generic tunics made into ’20s costumes (because I’ve used that costume trick myself!). Basically, the producers are focusing all the good costumes and details on Miss Fisher and spending money on renting period cars (there seems to be a car chase or driving scene in each ep). Everything else is fudged a little because it’s not as important. And that’s OK! That’s exactly what you do on a budget — spend on what shows most. 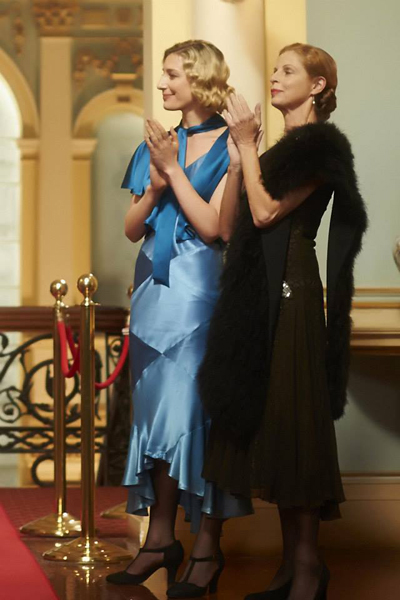 These secondary characters get nice gowns because the scene is a fashion show. 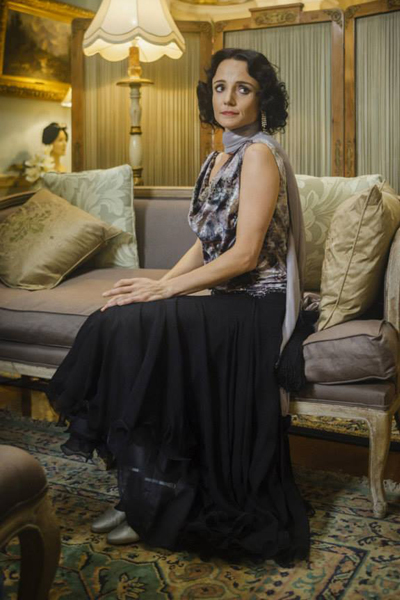 Yet the same ep, this character is wearing a not-as-exacting just-trying-to-get-the-feel-of-the-period outfit.

Phryne has great historical-repro shoes in every episode, which is important because she’s an excellent dancer and has some dance scenes that play important parts in solving some mysteries. Her stockings are period too, since the camera focuses on on her feet and legs, not just for dancing but because she’s very active, running, jumping, climbing, etc. Phryne’s hats and those of her companion Dot (played by Ashleigh Cummings) are great — they each get a lot of closeups, so of course, you want to see 1920s hats on them. The show apparently had a milliner create custom designs, and this level of detail works really well (compare with a show like Peaky Blinders where headgear is either non-existent or rather dull).

There’s also a nice contrast between the two characters, Miss Fisher being so flashy with expensive tastes and Dot being conservative and demure. Overall, Phryne’s costumes make excellent use of the colors and fabrics of the period. The designer Boyce reportedly uses quite a few vintage materials, and it shows. 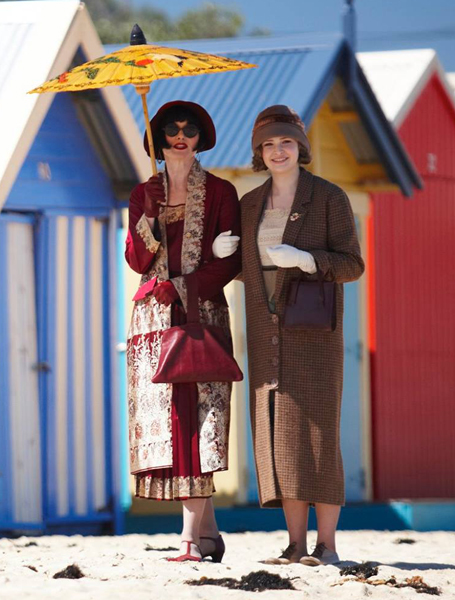 One detail I find lacking is the jewelry. It’s either pedestrian, cheap-looking, or just missing. This may be me comparing it to Downton again, where jewelry is SO important since the characters are all super-wealthy. But Phryne is titled (“the honorable”) and wealthy too. Her jeweled headpieces look a bit … like inexpensive necklaces plopped on her head. Not impressed, and I’d just as soon leave them off. 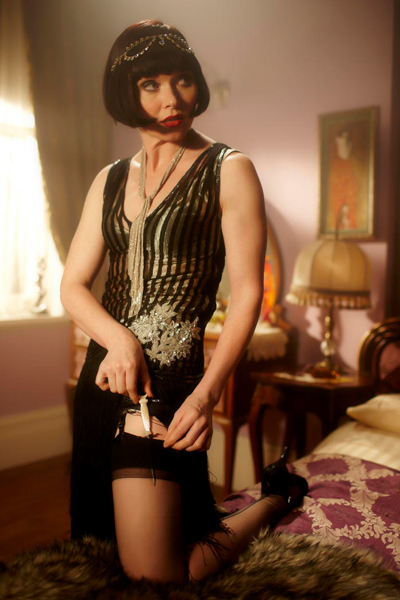 In Miss Fisher’s Murder Mysteries, the characters just DO a lot more stuff than in Downton, and we get to see a lot more types of clothing, which is really cool! They go to the seaside, so we see bathing costumes. They go to dance halls, so we see a variety of fun evening wear. They go to a costume party, so we see 1920s historical fancy dress. They take long journeys and several different trips, so we see lots of traveling coats and such. It’s refreshing to see a breadth of 1920s costumes for Phryne, as well as for all the people she meets. 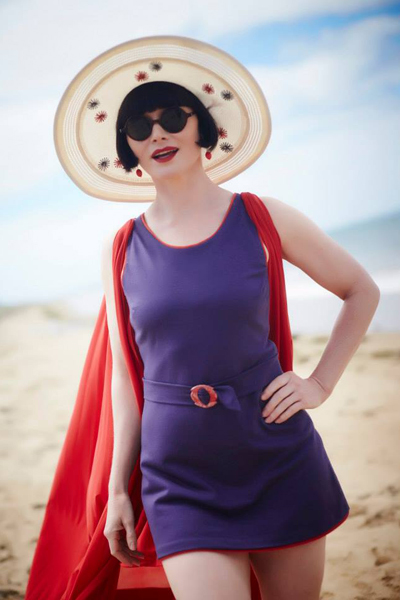 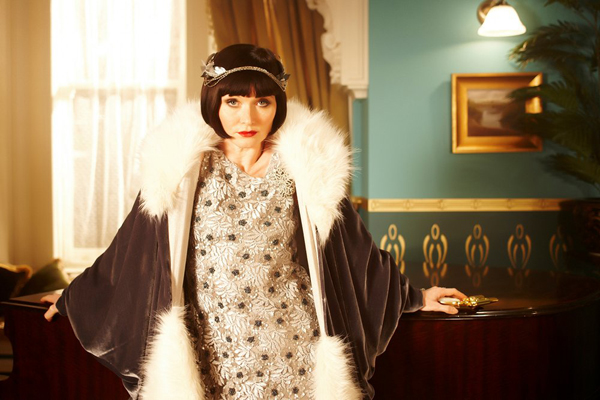 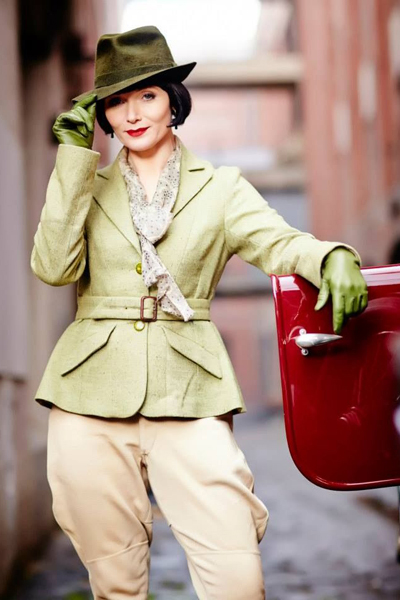 I’m still watching eps and really enjoying Miss Fisher Murder Mystery‘s mix of crime-solving, feminism, and period aesthetics. These are a few more outfits I like from the series… 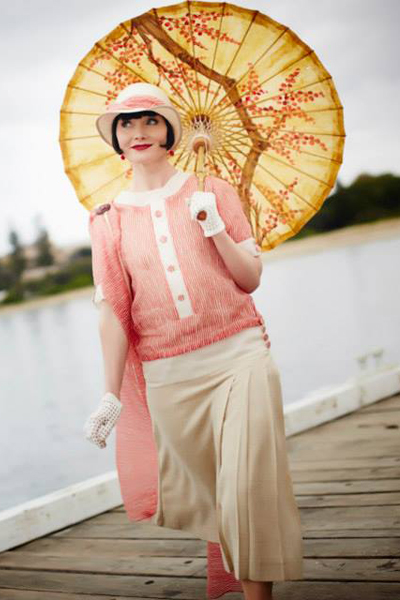 The sportswear in this series is especially good. 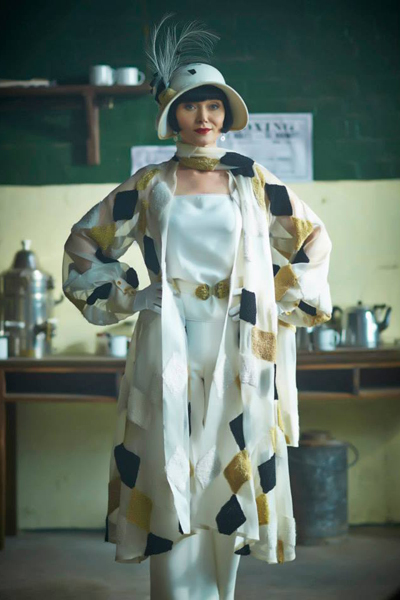 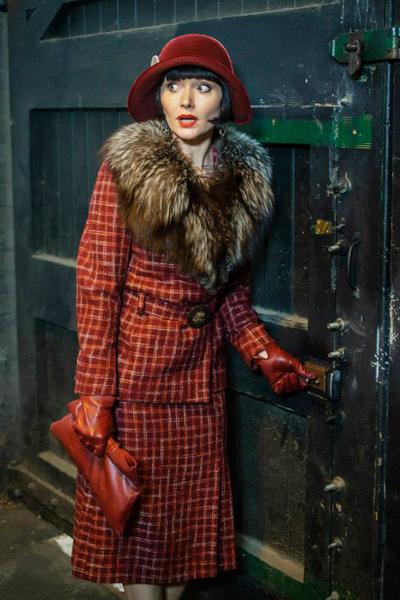 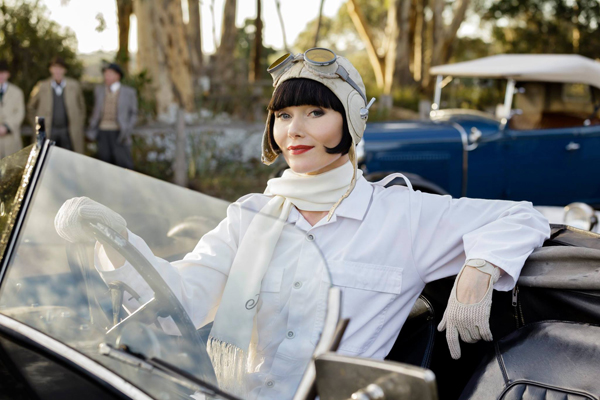 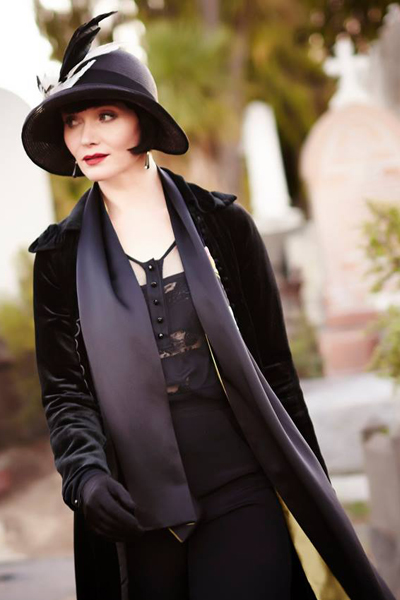 You can’t have a mystery series without some funerals.

Do you watch Miss Fisher’s Murder Mysteries? Do you like these TV series set in the 1920s?