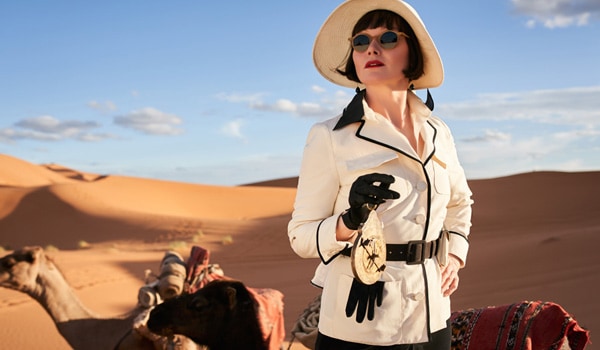 After a long wait, it finally arrived — the feature-length film of Miss Fisher and the Crypt of Tears (2020), where everyone’s favorite 1920s lady detective bursts out of the hourly TV format for 101 minutes of big-budget, on-location action and adventure! The movie premiered in Australia and limited screenings occurred in the U.S., but some were canceled due to pandemic restrictions. However, Acorn TV is now the exclusive online home of this film. So if you still haven’t seen Miss Fisher’s big movie, why not sign up at acorn.tv for a free 7-day trial and check out?

I’m not going to give too many spoilers for the plot of the film; in many ways, the story is a typical Miss Fisher mystery, just with a wider variety of locations. As you can tell from the trailer, it’s got an Indiana Jones vibe being set in 1929 Palestine — while being filmed in Morocco. In the production notes, executive producer Fiona Eagger says:

“We considered filming in Jerusalem itself and in Israel, but I heard from another filmmaking team about the advantages of Morocco — incredible landscapes, experienced crews and the amazing back lots in Ouarzazate, which included a Jerusalem set. Our fantastic art department dressed it as 1929, and we filled it with extras in stunning costumes from the period.

We also had the opportunity to film in Ridley Scott’s set for Kingdom of Heaven, which was a big thrill, at an amazing crater near the beginning of the Sahara where The Mummy was filmed and at amazing sand dunes near Merzouga where films such as Herzog’s Queen of the Desert were made.”

Another big chunk of the movie takes place in Britain (though filmed in Australia!), so there’s only one brief scene in the TV show’s home of Melbourne, which affords viewers only the tiniest meeting with Dot, Constable Collins, Bert, and Cecil. However, Detective Inspector Jack Robinson (Nathan Page) is a major player in the story, because, c’mon, otherwise this would be boring, amirite? Oh, and we do get a smidge of Aunt Prudence (Miriam Margolyes) for comedic relief. But mostly it’s Essie Davis as Miss Phyrne Fisher running around and saving the world while wearing flashy outfits. Those outfits were NOT designed by Marion Boyce who created costumes for the three seasons of the TV show (apparently, she had a timing conflict). Instead, they were done by Margot Wilson, another Australian costume designer who shared credit with Boyce on the film The Dressmaker. Wilson created about 15 key outfits for Miss Fisher, but she hasn’t done a lot of press about the film. In Vogue Australia, she commented:

“Phryne has a lot of action scenes in the film, so many of the costumes were built to accommodate that, and were designed with that purpose in mind. Essie is a very physical actress, she is very strong, and she’ll really throw herself into the character. Anything flimsy, we had to make multiples of.”

Which, yeah, that’s pretty much a given for an action movie. In the same article Essie Davis praises the level of detail the costume designer put into the outfits:

“There is nothing quite as attractive as a well-put-together woman. I love the incredible fabrics and patterns of her garments, the embroidered details, the coloured shoes, the buckles … I had this incredible pair of knee-high black and white canvas boots made for the desert scenes, and these were my ‘practical’ flat boots for walking in the sand.”

And you do see this on screen. There’s a great deal of color coordination, where, say, dress insets match bodice buttons or a hem treatment color matches the hat trim color — making for very put-together outfits. The red silk dress with blue-check insets she wears, above, not only has a matching hat & neck scarf, but coordinating shoes.

I’d say that Phryne’s wardrobe falls into three main categories: smart daywear (often riffing on the same dress style), sparkly evening gowns (that are similar to each other in their own ways), and then just one outfit for the desert wandering, which gets progressively distressed and broken down. Maybe because it’s a film and because of the Indiana Jones references, the look of the thing is a smidge cartoony and less casual and lived-in than the TV series. She’s not at home, after all, and the visual references are a bit bigger and more dramatic. The matchy-matchy-ness of her outfits emphasizes the cartoon drama in a way, not a bad way, just a different way.

For example, there’s this sweater and skirt combo that would otherwise seem quite simple, but the color combo, the accessorizing, and OMG, that monogram, make it really stand out in a way I can’t imagine Miss Fisher running around Melbourne in. “P.F.” for “Phryne Fisher” of course. But is that really necessary? The beret, scarf, & gloves are enough. I’m not saying her tartan outfit doesn’t have historical inspiration, just that it’s tweaked for filmic effect. Compare with this 1928 fashion plate from Tissues de la Ste. A. Picardie (via The Met Museum), where the there’s a distinctive combo of solid & pattern in the sportswear.

Both the red and blue dress, above, and two other dresses have the same basic style with contrasting gussets, or inserts, at the hem. This is a period fashion, although I can’t find as many examples of using contrasting colors/patterns. It looks great onscreen! The style was intentional for costume designer Margot Wilson, who said in the production notes:

“She jumps from a cliff onto a train and through windows and steals a motorbike. So, I had to design an action dress to cope with all that which consisted of a lot of gussets.”

Even when Phryne is just walking around, this dress style’s movement emphasizes how active and take-charge she is. Wilson also made a point of giving Miss Fisher’s clothes a sleeker, more fitted and feminine line, in contrast to the TV series. This one is adorable with alternating hot pink & bright red inserts that coordinate with the alternating button colors at the neckline & the lining of the bell sleeves. The skirt of this one is onscreen for just a hot second, but it has red inserts that coordinate with the red at the bodice & on the hat. Photo courtesy of Every Cloud Productions and all3media International.

I couldn’t find out who was the milliner for this movie, but the hats are to the same high standard as the TV show. The trimmings don’t seem quite as extravagant — no feathers, for example — but that could be because of all the travel in the storyline. Hat is perfectly matched to this coat. Tho’ she’s not wearing the hat in this promo. Photo courtesy of Every Cloud Productions and all3media International.

Speaking of hats, Aunt Prudence gets probably the best one in the whole film! Who doesn’t love a well-done wired brim hat? So pretty!

I have one small complaint with Miss Fisher’s daywear, and it’s that we see her black slip under a white blouse, which doesn’t seem quite right. When everything else she wears is SO perfectly matched, why go there? She’s wearing this underneath the purple coat at one point. The black slip is very obvious from the back.

OK, Phryne’s eveningwear sent me down a research rabbit hole because during the TV show, she wore solidly 1920s evening gowns and here … well, IMO, these are barely ’20s and really getting into 1930s. First, she has a gold sequined number: A black & gold sequin cape goes with it. Close up of the sequin palliates.

The closest historical reference I could find was this:

This 1929 evening gown by W. W. Reville-Terry Ltd. of London (in the National Museum of Art, Architecture and Design, Oslo, via History of Fashion Tumblr) is a similar shape, beaded, & belted.

Then there’s the silver sparkly evening gown Miss Fisher wears. This too pushes the period later. The ensemble is several shades of silver & several materials, all quite elegant. She’s first shown wearing this scalloped capelet over the gown, which looks like an integral collar. But indoors, she is immediately shown without the capelet. When she exits the building in a later scene, she has the capelet on again in a bit of a continuity gaffe. Photo courtesy of Every Cloud Productions and all3media International. The gown is floor length with a somewhat full skirt.

The sequined skirt here (and the full sequined gold gown) both feel very ’30s as that was such a big style in Hollywood glamor gowns of the period. Metal sequins would have been used in the 1920s, because acetate (plastic) sequins weren’t invented until the mid-’30s. So the full ‘liquid-look’ sequin dress or skirt wasn’t really done in the ’20s due to weight. Metal sequins were often mixed with beads and used to highlight designs. Also, that capelet style is very 1930s, while the basque waist that dips to a point in the front was used a little bit in the ’20s and more in the ’30s.

This evening gown in the July 1931 issue of The Delineator magazine (via the University of Wisconsin) has a similar pointed waist.

Miss Fisher’s final outfit is for traveling in the desert, and she starts out in a chic black-and-white suit with a hat, sunglasses, and flowing scarf. In the production notes, costume designer Margot Wilson said the desert’s colors inspired her:

“I can remember flying into Marrakesh and just seeing the incredible salmon pink buildings and landscape. That really stuck in my mind. For the Phryne character, I was thinking about colours that would work with that salmon pink and something dynamic. I also wanted to create a black-and-white safari look with a kind of Laurence of Arabia feel.” OK, Phryne is the major clotheshorse of the movie, but there were a couple other costume things I noticed. One is that at one dinner, all the female characters except Miss Fisher are wearing really interesting print dresses! She kind of blends into the scenery by wearing a muted purple gown, which is unlike her character. Although in this film, she mostly wears solids, and I guess that reads more clearly on a big screen BUT it doesn’t seem like this film was ever going to get a super wide theatrical release! I’m confused by some of the choices made here. Watch for this scene & how each woman (except Phryne) has a really interesting ’20s-appropriate print dress. The hairstyles are good too! While this is a nice dress (& looks brighter purple in this screencap), it doesn’t do much for her in the scene.

Another scene to look out for is the ball. There’s a lot going on, so you might want to rewind and watch twice! When I did that, I was pleased to notice how many plus-size ladies were in the background. A lot of times, crowd scenes in costume dramas are filled with stereotypical straight-size “pretty” and young people. This crowd had a few older women and men, as well as some nicely dressed women in a range of sizes. Well, I’m sure none of my nitpicking matters to Miss Fisher fans! You’re in it for the fun of the story, and yes, it’s a fun mystery romp with a dash of romance. As a movie, it can stand alone for those not familiar with the TV series and could even be a good entry point. One could go back and watch the series after seeing the film. There are only a few — just enough? not quite enough? — references to the TV series plotlines that newbies won’t get and that insiders will appreciate. Mostly, this is a solid female-lead adventure story, and we don’t have enough of those.

What do you think of the costumes in Miss Fisher and the Crypt of Tears?