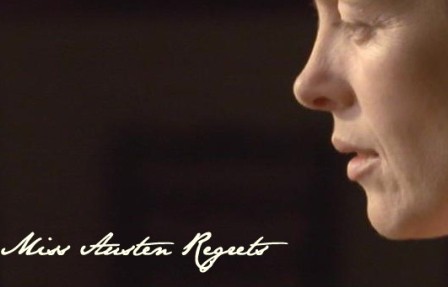 We are treated to a champagne swilling, snarky, overtly flirtatious Miss Austen (Olivia Williams), seen through the adoring eyes of her young niece, Fanny (Imogen Poots), who at one point even becomes a bit of romantic competition given Jane’s almost mercenary behavior when it comes to the opposite sex. It seems that the intent of the film was to make Jane something of an aging party girl in her late-30s, a woman who wouldn’t have raised much of an eyebrow if she had lived 200 years later, but who looks borderline ridiculous in staid and stilted Regency England. This Jane chafes at the restrictions her sex is expected to adhere to, but rather than slyly take down the establishment as the real Jane did in her writing, this Jane sweeps Fanny up in a fantasy world where rules do not apply to Miss Austen and, goddamn it, if she wants to get shit-faced drinking champagne in a fancy garden with her impressionable young niece, she’ll bloody well do it.

If I sound a little harsh in my assessment of Jane’s character in this film, it’s not to dissuade you from watching it. It’s actually a pretty decent film, marking out an engaging storyline, and taking the viewer on a nice little meandering trip into the imagination of scriptwriter Gwyneth Hughes (who later went on to write the acclaimed 2018 miniseries Vanity Fair) as she muses about how Jane Austen should have been, not how she necessarily was. I think the real Miss Austen probably lies between the self-sacrificing romantic of Becoming Jane, and the dysfunctional iconoclast of Miss Austen Regrets. What the film does get right is the costuming, which of course we’re all here to discuss anyway, so enough of my blathering on about whether or not Jane Austen was essentially a proto-Carrie Bradshaw (or worse/better, a proto-Patsy Stone). 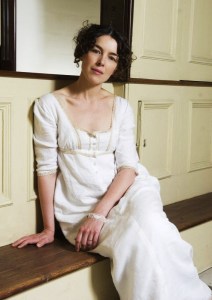 Really, what is a Jane Austen movie without the ubiquitous Little White Dress? 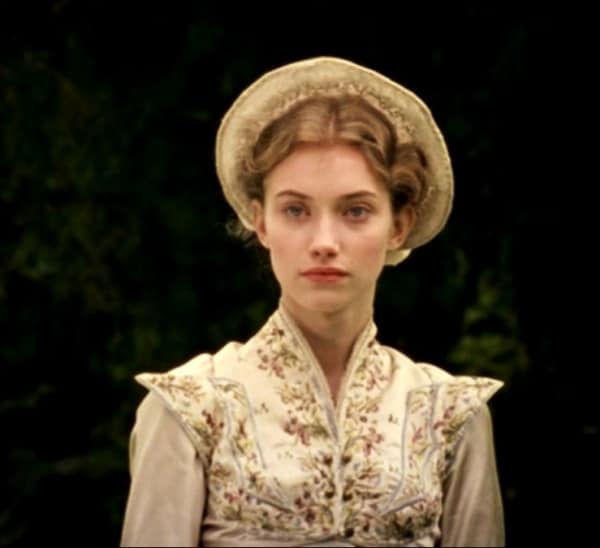 This is an innovative way to recycle a man’s Regency waistcoat. Her lapels are the pocket flaps. 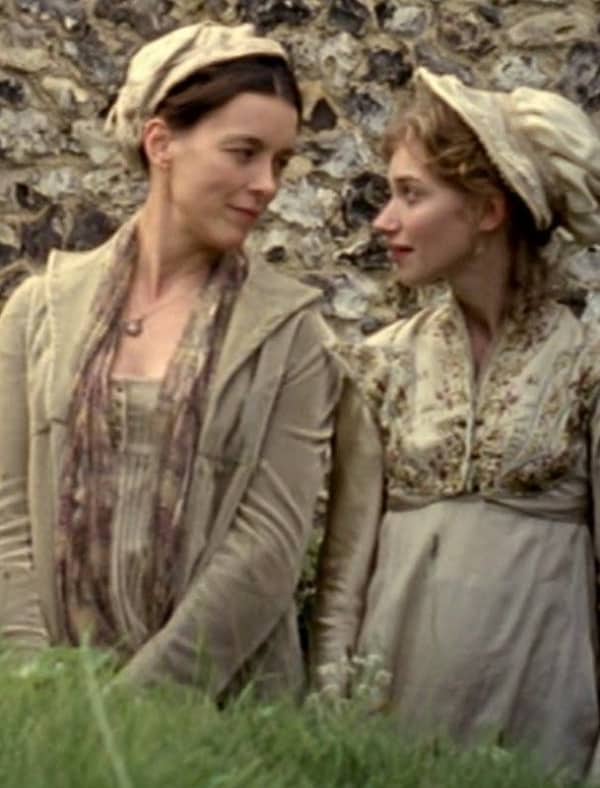 The color palette is mostly beige, which is an interesting contrast to the saucy and conspiratorial Jane. 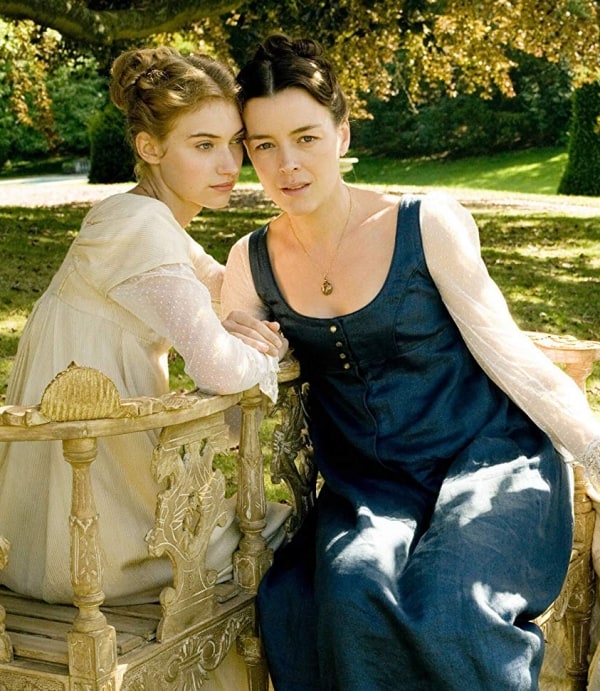 This denim color has been all the rage in Austen films for years, but all I can see when I look at this dress is this… 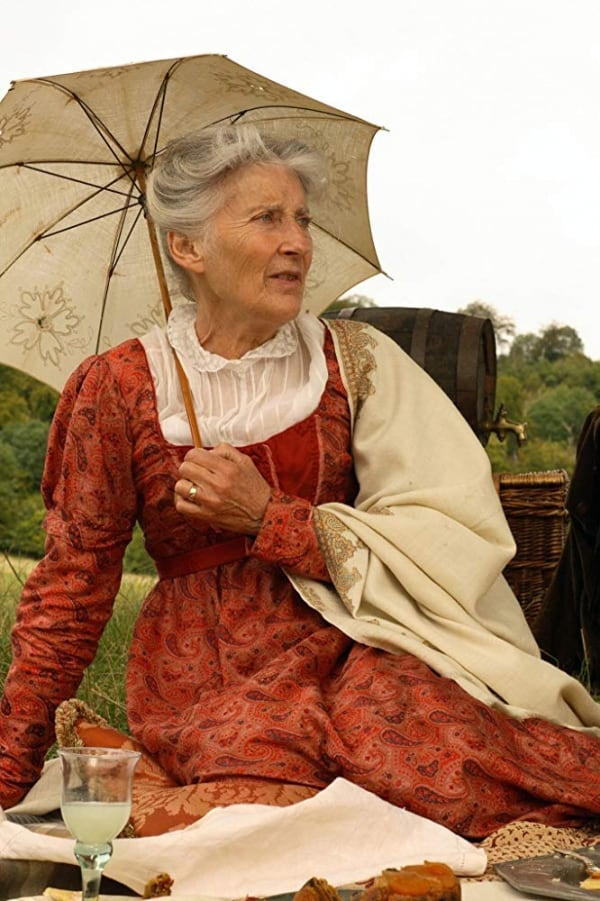 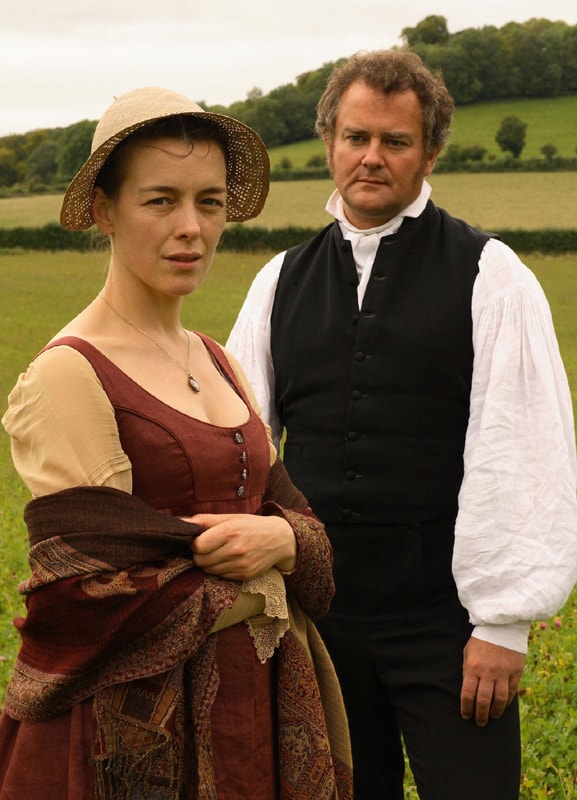 Hugh Bonneville, one of our favorites, plays Jane’s old flame Rev. Brook Bridges, who can’t decide if he’s still madly in love with her or severely disappointed in her. 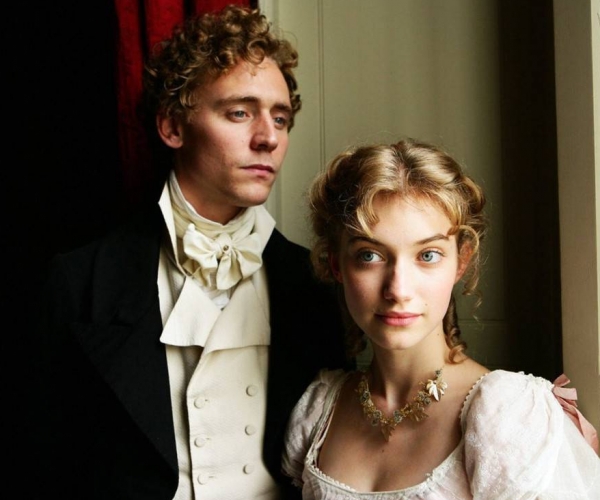 While I am normally a fan of Tom Hiddleston, he and Imogen Poots were so cloyingly saccharine, I started to struggle with their scenes. 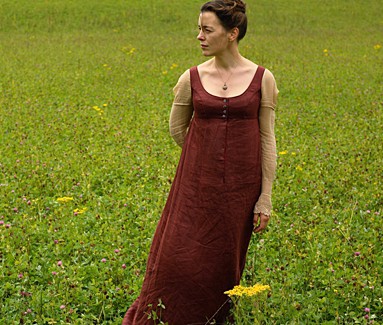 Yet another example of the modest dress linen jumper from the Warren Jeffs Sister Wives collection, circa 1990. 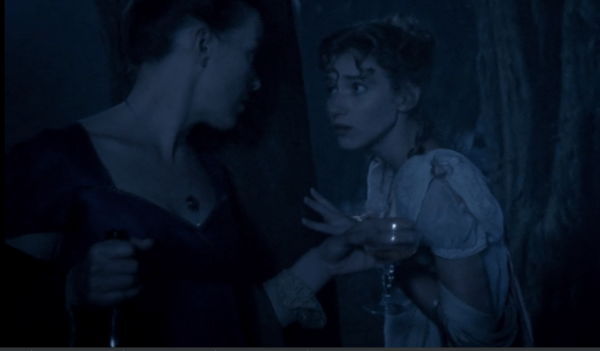 I will not lie, this is basically me at every historical reenactment I go to. At some point, I will run off with a bottle of champagne and a girlfriend or two and spend the rest of the night lurking in the shadows, swilling from the bottle, and getting up to all sorts of no good.

How did you feel about Miss Austen Regrets? Share your thoughts with us in the comments!