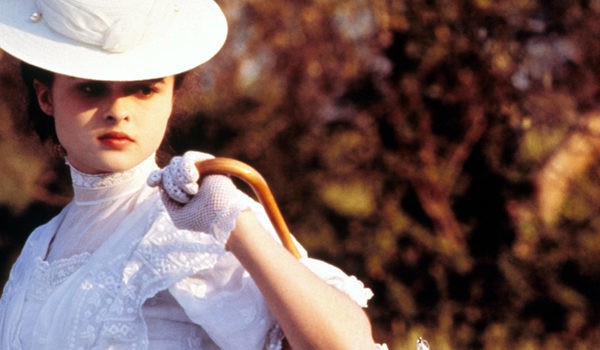 In the frock flicks pantheon, few lights shine brighter than the films of Merchant Ivory Productions. Typified by A Room With a View, these historical costume movies were often adaptions of Edwardian novels, showcasing some kind of disillusionment with love and/or society. Their heyday for frock flicks was about 1985 to 1995, although the pair of producer Ismail Merchant and director James Ivory made films together starting in 1963, with their frequent collaborator, screenwriter Ruth Prawer Jhabvala. Merchant died in 2005, but the production company has continued with at least three more works since.

While the company made nearly 50 films, not all of them qualify as historical costume movies for our purposes. But plenty do, so it’s time to collect them all together in the ultimate guide to Merchant-Ivory films right here. 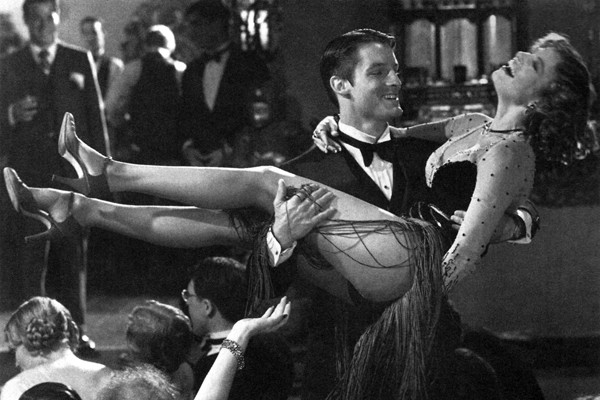 This is probably the first Merchant-Ivory production that can be termed a historical costume movie, since it’s set in 1920s Hollywood. Raquel Welch stars, and the costumes are by Ron Talsky. 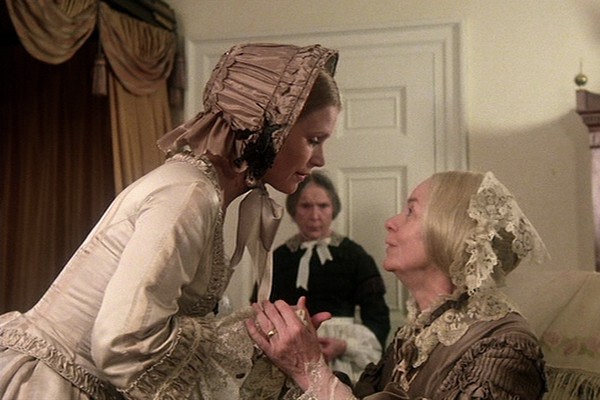 Adapted from the Henry James novel of the same name, this is really the start of what we now call a “Merchant-Ivory” movie. Set in pre-Civil War America, the costumes are designed by Judy Moorcroft, who would work on a couple Merchant-Ivory films. Her experience on BBC productions was crucial, according to Ivory, and she helped lead the wardrobe, hairdressing, and makeup crew:

These artists had long previously steeped themselves in the Victorian past by way of old photographs, paintings, and extant evidence — had taken almost an archaeological, or a scientifically detached approach to the film’s overall design, which made it stand out at a time when most period films — particularly ones made in America — looked pretty sloppy. For instance, in this film the actresses, as a matter of course, were required to be tightly laced up into corsets with stays (which made them stand, walk, and sit right), and were not allowed to fiddle with their own makeup, or to surreptitiously put on lipstick or eye shadow, etc., or dictate how their hair would be dressed (when it came to our twenties films, the rule was reversed: no brassieres and lots of makeup). I heard the costume designer and hairdressers collaboratively discussing “the line” — that all-important silhouette that ran from the top of an actor’s (or actress’s) correctly coiffed head, to the tips of his (or her) shoes, which defined the historical period exactly to within a year or two.

Moorcroft was nominated for a Best Costume Oscar for The Europeans, and the period costumes in Merchant-Ivory productions only get better from here. 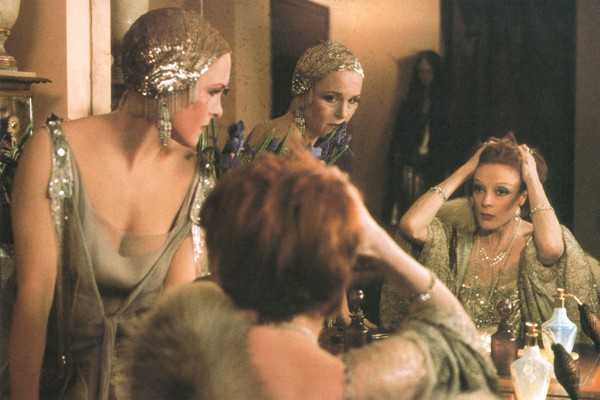 Another 1920s film, this one darker in theme, set in Paris, and dealing with a complicated sexual triangle. Judy Moorcroft’s costumes elevate the look. 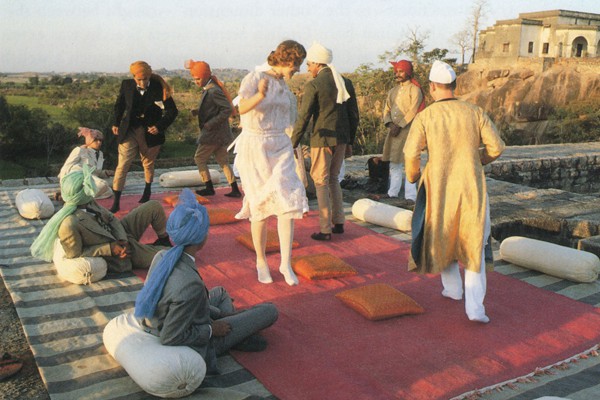 Based on Ruth Prawer Jhabvala’ novel (which she, of course, adapted), this film starts in the present day and flashes back to the 1920s as the main character learns about her great-aunt’s life. The costumes are designed by Barbara Lane. 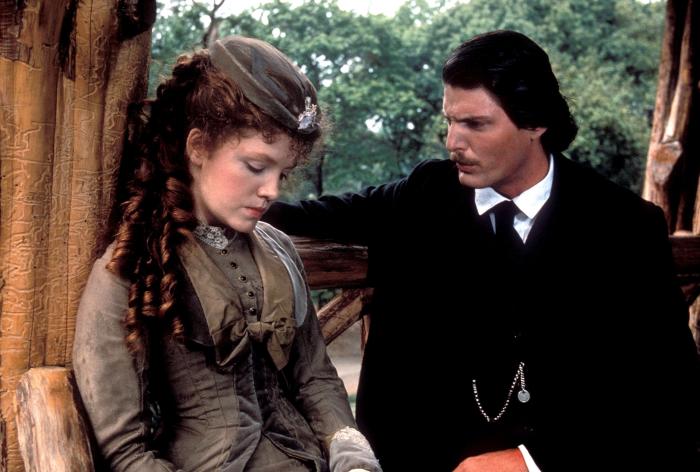 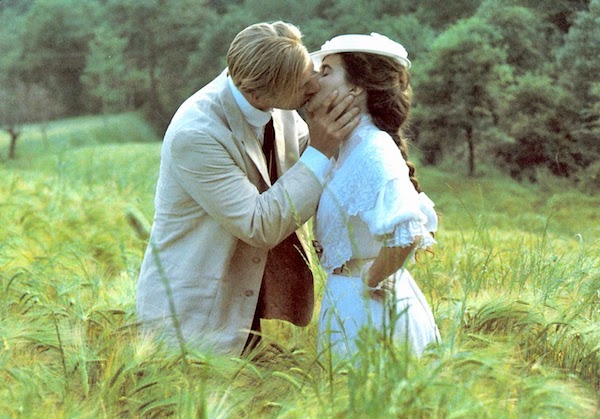 If this doesn’t make your top 10 frock flicks list, I don’t know why you read this blog. Honestly, this movie has it all: perfect costumes, charming locations, witty banter, a female lead character you wish you could be, male characters you want to do AND talk with afterwards, romance up the wazoo. A Room With a View stands up to repeated watchings, and you’ll appreciate it differently over the years too. Starring Helena Bonham Carter, Daniel Day-Lewis, Julian Sands, Maggie Smith, and so many more, this is everything you can ask for in a costume movie or any movie. 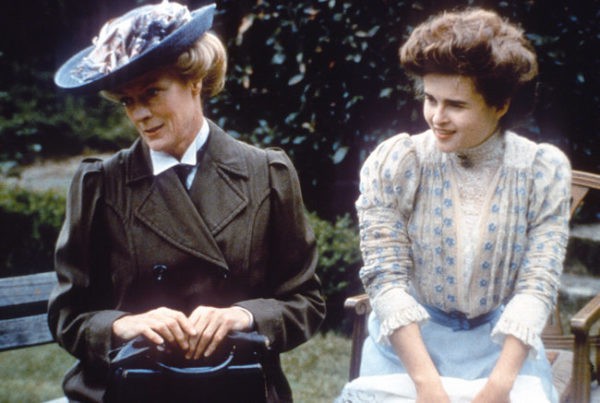 James Ivory notes that the film does take liberties with E.M. Forster’s novel, but primarily by adding in pieces from the author’s notes:

These early drafts have been published by Edward Arnold in an intriguing little book called The Lucy Novels (1977), edited by Oliver Stallybrass. In it one may follow to some extent the development of the novel which Forster admits may not be his best, but which he says may very well be his nicest. He liked, too, the character of Lucy Honeychurch and, somewhat dyspeptically comparing her with the women in Howards End (1910), counted her as one of his few successes. To me, in some ways, she may be looked at as an early sketch, in terms of behavior, of Adela Quested in A Passage to India, published in 1924. Both women seem to be fighting their own best natures, to be hysterically turning away from any kind of honest introspection, and at a crucial point in the story, to be embarking on an enterprise which will plunge them and everyone who loves them into misery. 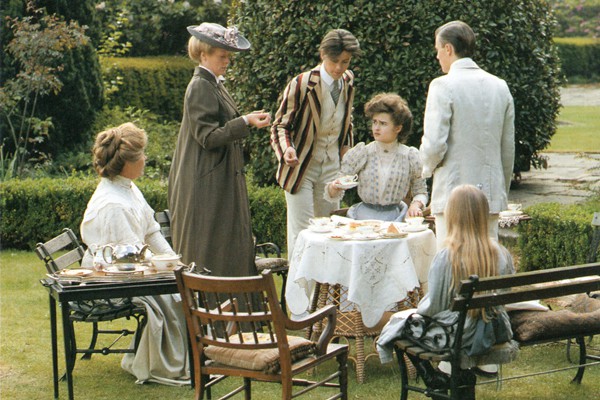 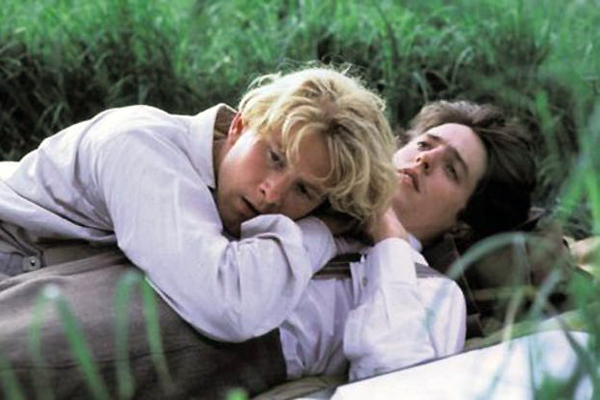 Following up the wild success of Room With a View with a languorous, quiet film about Edwardian homosexuality might have seemed risky at the time, but Merchant-Ivory received nothing but acclaim for this second E.M. Forster adaption. With James Wilby as Maurice and Hugh Grant and Rupert Graves as his sequential lovers, it’s an elegant film, deeply restrained per the period, and yet romance and hope manage to survive in this telling. Jenny Beavan and John Bright were nominated for another Best Costume Oscar. 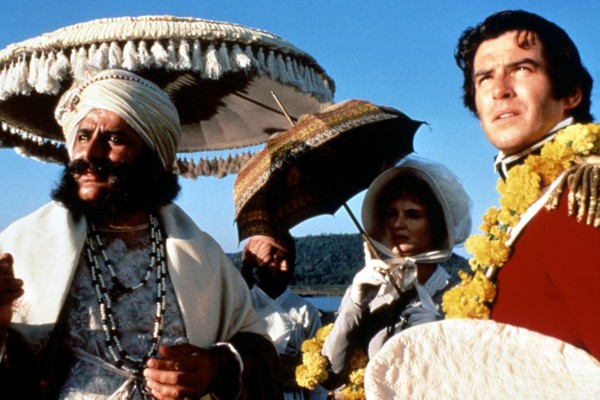 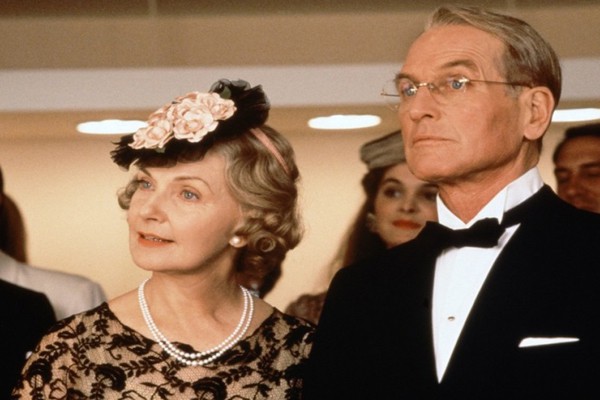 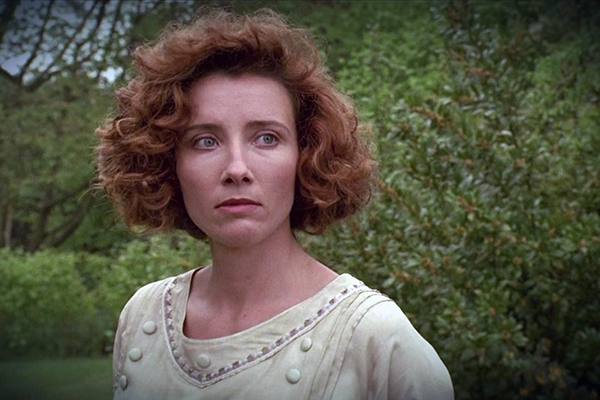 Back to E.M. Forster, this is a tour de force of acting, costumes, and cinematography. Whereas A Room With a View is delightful and romantic, Howards End is complex and breathtaking. Every moment is perfectly constructed, heartbreakingly beautiful, tragically fabulous. Emma Thompson won a Best Actress Oscar for her performance, and she was ably costarred by Anthony Hopkins, Helena Bonham Carter, and plenty of Merchant-Ivory regulars, including Jenny Beavan and John Bright for the costume designs (for which they received another Oscar nomination). 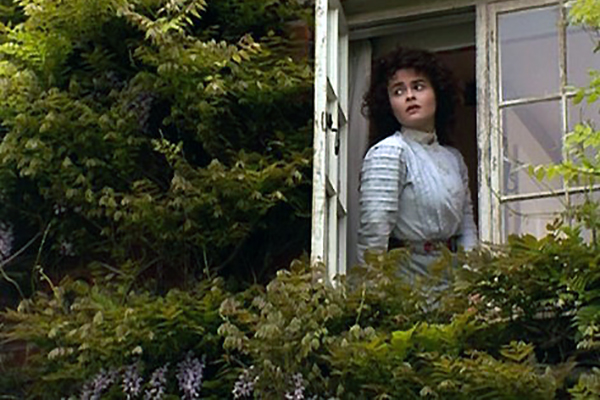 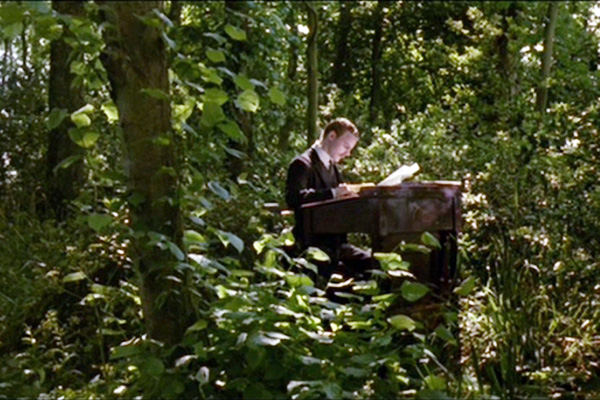 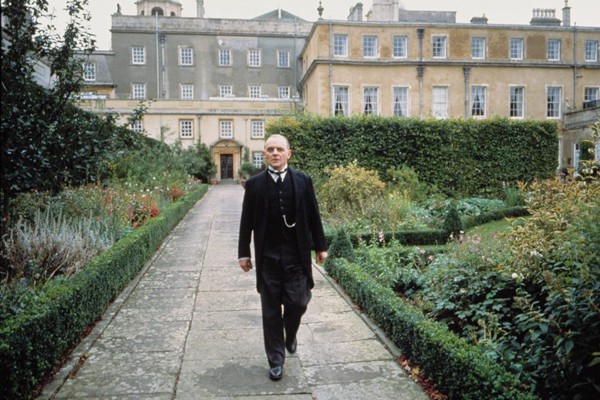 Also based on a book, but interestingly a 1989 Kazuo Ishiguro novel set in the lead up to World War II. Anthony Hopkins plays a terribly repressed butler, Emma Thompson is a strong-willed housekeeper, and they both work for an English aristocrat who turns out to be a Nazi sympathizer. Almost all the action takes in and around a fictional English country manor house, which required at least four real houses to film. And yes, more Oscar-nominated costumes by Jenny Beavan and John Bright, in addition to seven other Oscar nods for this movie. 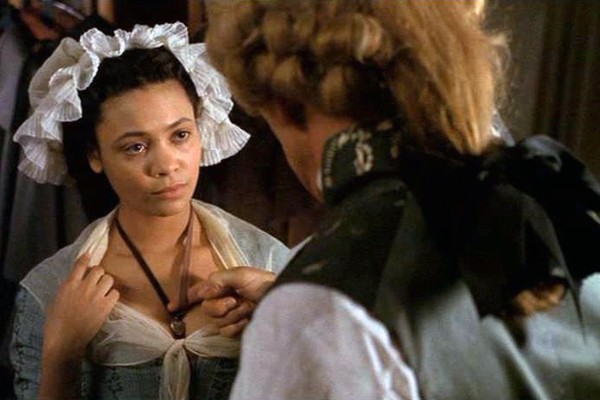 A fascinating look at Thomas Jefferson’s years (1784-1789) as the American ambassador to France, covering both his relationship with a married woman, Maria Cosway, and with his young slave, Sally Hemings. This was the first film depiction of Sally Hemings, and it wasn’t until 1998 that DNA evidence confirmed Jefferson as the father of her children. The director comments:

The relationship between Thomas Jefferson and Sally Hemings has traditionally been accepted by black Americans, but lay uneasily in the American historic subconscious from the days it was first described in the press by Jefferson’s enemies while he was president. The story was later vehemently denied by white historians (and, of course, by his white descendants) despite much strong circumstantial evidence to the contrary. There was, too, the wide-spread and well-documented custom in the slave states of such master/slave-woman liaisons, which were illegal in Virginia and elsewhere. Despite all this, Jefferson’s modern biographers, with the exception of Fawn Brodie, continued to deny the story.

When Jefferson in Paris first appeared in 1995, it was condemned by American and British newspapers for supposedly playing fast and loose with the historical record. However, since then, proof of Jefferson’s paternity of at least one of Heming’s children has emerged from DNA studies and the story at last seems to have found widespread public and scholarly acceptance.

The gorgeous costumes are by Jenny Beavan and John Bright, of course, plus faaaaabulous hair by Catherine Leblanc, Sophie Asse, and Carol Hemming. 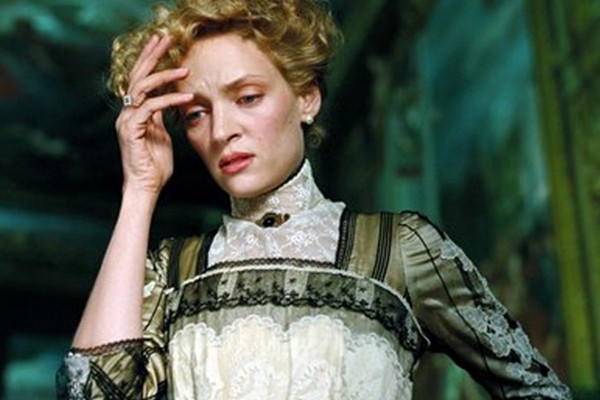 This movie caps Merchant-Ivory’s Henry James trilogy and is based on the 1904 novel. It’s beautiful to look at, but a pretty sad-sack story. Kate Beckinsale, Uma Thurman, Anjelica Huston, Jeremy Northam, et. al., are all beautifully dressed in John Bright’s designs, and there’s one AH-MAY-ZING masquerade party scene worth watching for all the costumes. 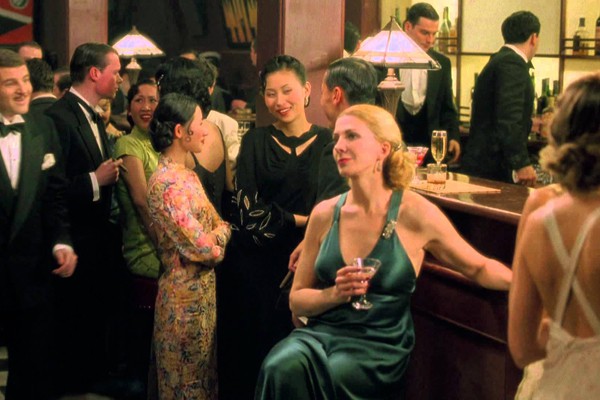 Ismail Merchant’s final film, this is a political and romantic drama in 1936 Shanghai on the edge of the Second Sino-Japanese War. Ralph Fiennes is a blind American diplomat and Natasha Richardson is a Russian countess on the run. John Bright designed the costumes.