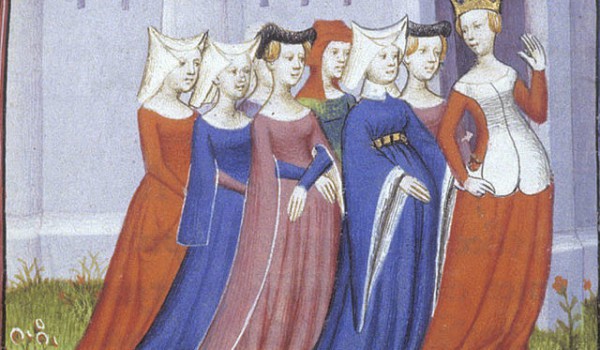 Our occasional series about history’s most interesting people who have been overlooked by Hollywood. See also our Top 5 Renaissance Women Who Should Have Movies Made About Them.

Women’s lives in the middle ages get short shrift on screen — there’s a few queens (hi, Eleanor) and that’s usually it. But actual history has more going for it. Let’s give Hollywood some ideas… 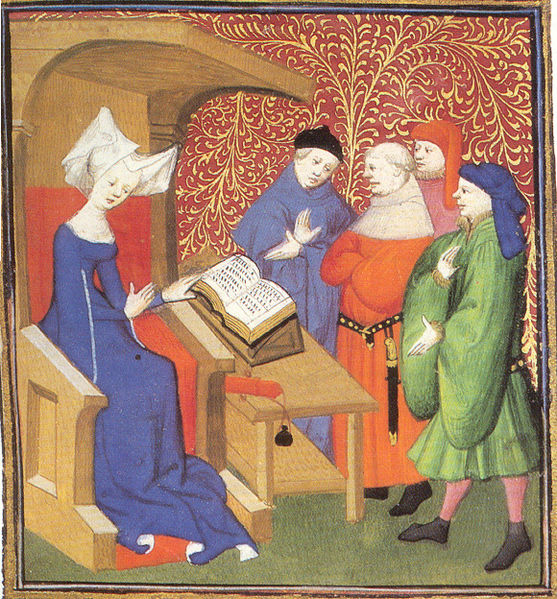 Christine de Pisan is one of the first historical women you might learn about in school. Not that there weren’t any worth studying before her, but she was so famous in her day that there she is arguably more important a historical figure than her contemporary Joan of Arc.

Born in 1364 in Venice, Christine was the daughter of an Italian astrologer and physician, who accepted an appointment at the court of Charles V of France within the first few years of her life. Raised in the French court, she received an education on par with that of her male counterparts, something of a rarity for women of this age. Married at 15 to a royal secretary of the court, she bore her husband three children before he died, leaving her at age 25 with a family to support that included her mother, a niece, and her two surviving children. So, she turned to her writing, becoming a sensation in the French court for her love ballads (the renaissance equivalent of trashy romance novels, but with less turgid members).

But what really catapulted Christine to international levels of recognition (both good and bad) was her treatise, The City of Ladies. In this book, she argued that women had unique gifts that made them effective peacekeepers and negotiators and contradicted negative stereotypes of women by pointing out that ladies have been historically prevented from proving those stereotypes wrong by not being allowed to participate in intellectual dialogues with men. Christine is also known to have made a point of supporting other female artists, working with a woman artist by the name of Anastasia of whom she wrote “one cannot find an artisan in all the city of Paris — where the best in the world are found — who can surpass her.“ Girl power! 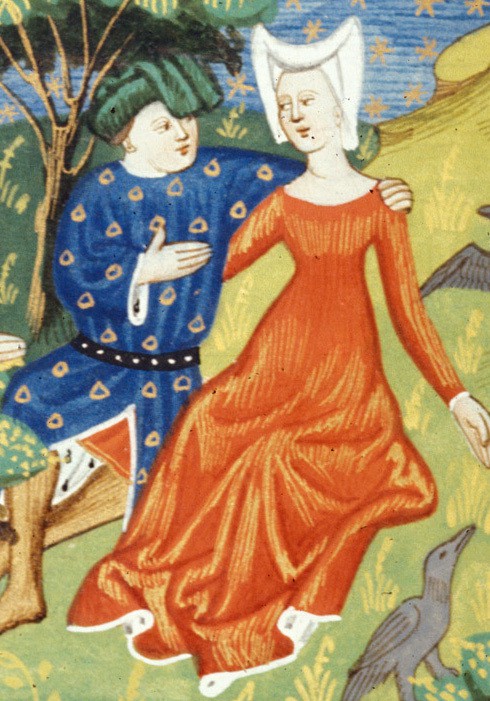 Annoyingly, there doesn’t seem to be any portraits of Katherine Swynford, John of Gaunt’s third Duchess of Lancaster, so instead you get an image of Circe from an anonymous French translation of De claris mulieribus (Royal 16 G V f. 42v, to be exact). Anyway, the story of Katherine Swynford is fascinating and about as juicy as they come.

Katherine Swynford, daughter of a certain knight named Paon de Roet from Hainault, grew up in and around the court of Philippa of Hainault, Queen of England. She was educated, likely more so than the average woman of her time, and at around the age of 16 or 17, she married Hugh Swynford, a knight and landowner who was doing fairly well for himself. This probably would have been the the most noteworthy part of Katherine’s story if she hadn’t been appointed to the household of John of Gaunt, Duke of Lancaster and younger son of King Edward III, a few years after her marriage.

Katherine was appointed the governess to John’s children by his first wife Blanche of Lancaster, and their affair is theorized to have started fairly early on after she was brought into the Duke’s household. Duchess Blanche, who was sick with the illness that would eventually claim her life a year or two later, seems to have allowed the relationship to flourish without complaint. Katherine was said to have been very devoted and close to Blanche, and the children from both of John’s first two marriages demonstrated a great deal of affection for her, so apparently Katherine’s relationship with Blanche’s husband was a non-issue. Four years after Blanche died in 1368, Katherine gave birth to the first of her four children by John, which leads to the question as to whether John and Katherine waited to consummate their affair until after the death of the much loved Blanche, but not before he remarried, for in 1371, John soon found himself in need of another wife … who wasn’t Katherine. Instead, he chose Infanta Constance of Castile, a solid political choice in order for John to claim the throne of Castile. The affair between Katherine and John continued under Constance’s tenure as Duchess of Lancaster until 1381, when Katherine was removed from the Duke’s employ in an attempt to mitigate the scandal surrounding their relationship that had been increasingly building for the last several years.

Katherine and John were finally wed in 1391, and thus she became his third Duchess towards the last few years of John’s life, legitimizing their adult children in the process (who bore the surname of Beaufort and through which their decedents eventually claimed the throne of England). As an aside, Katherine’s sister married Geoffrey Chaucer, which made him the brother-in-law of the Duke of Lancaster–a fact I find amusing for some reason. 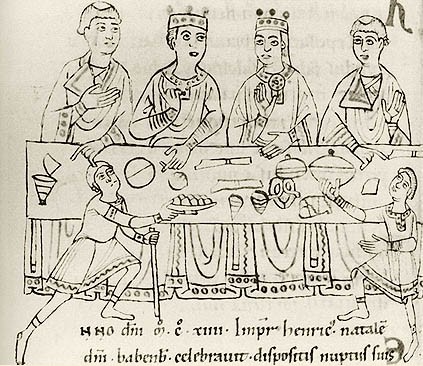 12th century depiction of the wedding feast of Matilda and Henry V. Cambridge, MS 373 3895B

Yeah, I know Matilda/Maud has shown up in various films and TV shows over the years, but there’s never been an attempt to tell her story fully. She’s often relegated to an off-stage role (as in Brother Cadfael) or a second, or even tertiary character (as in Pillars of the Earth), but I think she’s interesting enough to warrant her own film. Everyone is so preoccupied with her daughter-in-law Eleanor of Aquitaine that they overlook the fact that Eleanor wasn’t the only badass woman in the English court during the 12th century. In fact, it would be easy to draw a parallel between Matilda’s bad-assery and Eleanor’s, presuming that because of his mother’s influence, Henry II had a thing for strong women.

Matilda was the only daughter and eldest surviving child of the English King Henry I and his wife Matilda of Scotland, born around 1102. At the tender age of 8, Matilda was married off to Henry V, then known as the King of the Romans (who was German. It was complicated). She acquired the title Empress of the Holy Roman Empire in 1114. Her younger brother, William Adelin, was the heir apparent as his father’s only surviving legitimate male issue (as opposed to the dozen or more illegitimate issue he sired during his lifetime) until he very inconveniently perished in the White Ship disaster in 1120, which threw England into a succession crisis. Even though England did not operate under Salic Law, which forbade the succession of a woman to the throne, a woman had never ruled England in her own right and given the less-than-progressive views about females in general, a good portion of the English lords weren’t excited when Henry named Matilda his heir apparent.

Enter Matilda’s cousin, Stephen of Blois, who decided, based on the fact that he was Henry I’s nearest surviving MALE heir who wasn’t illegitimate, that he should be King of England, thank you very much. The English nobles split into two warring factions: those that supported Matilda’s claim to the throne and lead by Matilda’s half-brother Robert of Gloucester, and those who supported Stephen’s claim. Civil war ensued from 1135 to 1154, a period known as The Anarchy, which is far too complicated to sum up in a single sentence, so if you’re curious about it, here’s the Wikipedia article. At any rate, Matilda’s (highly disputed, even to this day) reign as Queen of England lasted only seven years, from 1141-1148 before she was ousted by Stephen in a sort of anticlimactic denouement that probably had as much to do with sheer exhaustion as it did with lack of funding. Stephen resumed his reign and died in 1154, having named Matilda’s 21 year old son Henry FitzEmpress, as his heir. Matilda continued to involve herself with English rule as the mother of King Henry II, and the mother-in-law Eleanor of Aquitaine, and died in 1167. 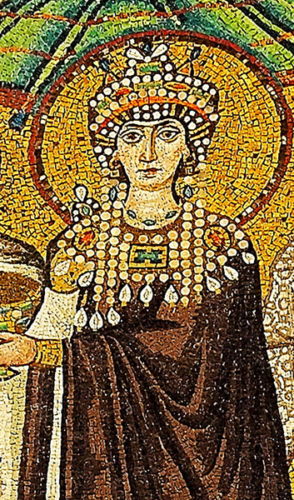 Detail of a mosaic depicting Empress Theodora, by the Master of San Vitale, before 547.

Ok, I’m stretching the “medieval” a bit here, to include the Byzantine Empire, only because I feel like Empress Theodora hasn’t been given her proper treatment in film. Two Italian films exist that depict her life, Theodora, Empress of Byzantium (1909) and Theodora, Slave Empress (1954) and judging by the stills from the latter, we might as well just pretend that these movies never happened.

So, what do we know about Theodora? Quite a bit, actually. Her life started out about as far from the imperial throne of the Byzantine Empire as a girl could get. Her father was a bear trainer and her mother was a dancer and actress (and as we all know, before the 20th century “dancer” and “actress” were usually code for “prostitute”). Theodora was not exactly royal, in other words, and as a result, she went into her mother’s profession and became a prostitute in a fairly low-end brothel, allegedly attaining some semblance of notoriety for her portrayal of Leda and the Swan. There were some wilderness years between the ages of 16 and 20 where she was the mistress of Hecebolus, a Syrian official who took her to the Libyan Pentapolis when he was appointed governor. Hecebolus seems to have abandoned her in North Africa which lead her to Alexandria, Egypt, and managed to become friendly with a few well-connected and well-placed individuals. Even as a humble wool spinner, she somehow managed to catch the eye of the heir to the Byzantine Throne, Justinian. Of course, marriage was out of the question as law forbade royals from marrying actresses. However, the main opponent to the match, Justinian’s aunt Empress Euphemia, conveniently died and his uncle cleared the way for the two to wed. When Justinian was crowned Emperor, he made Theodora co-ruler.

As Empress, Theodora proved a capable and strong leader, a patron of the arts, mentor to some of the greatest men in history, and a formidable force that reshaped the laws regarding women’s rights to allow women the right to divorce, the right to own property, and made rape a capital punishment. All in all, a pretty amazing trajectory from a back alley brothel to the Imperial palace.

What medieval women do you think are sadly overlooked by filmmakers?