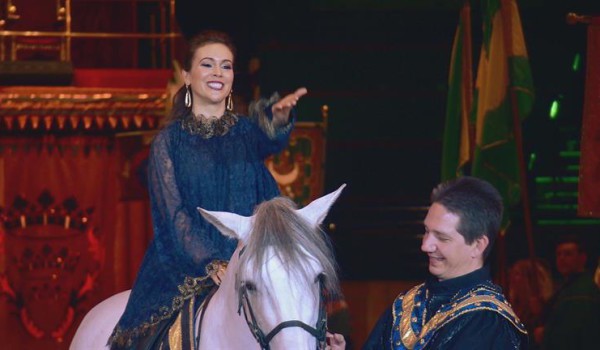 Or, what normies think about historical costume.

We wouldn’t normally cover a modern fashion show like Project Runway (even if Kendra and Trystan watch it religiously), because it’s modern, right? But the spring 2016 All Stars version had a challenge that was all about baroque fashion, and there’s a lot that’s entertaining about that.

For anyone who doesn’t watch Project Runway, it’s a reality show about fashion design. Each week, the designers are challenged to come up with an ensemble — sometimes the theme is as vague as “show us who you are as a designer” or as specific as “make a modern fashion design inspired by a fairy tale character but only drawing on literary references” or “make something ‘athleisure’ for Alyssa Milano’s line of women’s sports team apparel.” They’re always very much making modern fashion. They’re given a budget, a limited time to shop for fabric and supplies, and a limited time in which to make the ensemble. Then, there’s a fashion show judged by a panel. The All Stars edition features contestants from previous regular seasons.

Now, on to the episode entitled “Going for Baroque”:

First of all, in today’s corporate tie-in, the designers hear about their next challenge at MEDIEVAL TIMES. In NEW JERSEY. LOL. That is just inherently funny. Alyssa Milano, the host of All Stars, rides out on a white horse, wearing a hideous blue lace muumuu, and surrounded by Medieval Times performers who are clearly committed to thorough historical accuracy. (We know, they just wear whatever JoAnn’s Casa Collection costume is shoved at them, but we can still mock). 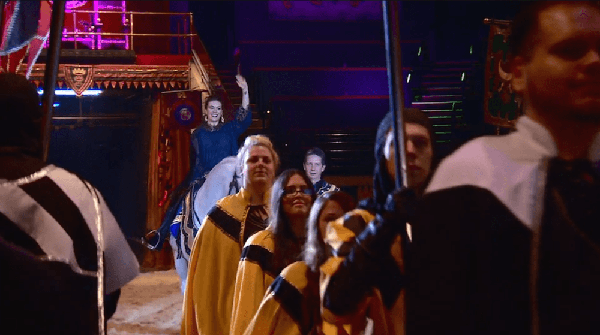 I mean, what’s with the hair on girl-in-yellow in the center? And the glasses? — Kendra 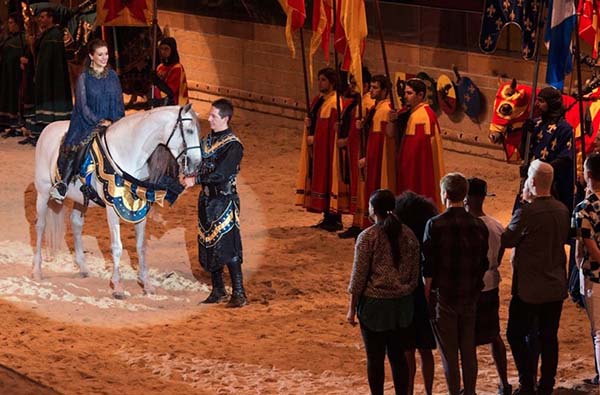 Those are the designers, front right. I feel like this is what the Field of Cloth and Gold looked like. — Kendra

Alyssa explains that the show is there because “as we know, the medieval era was important to the history of fashion and led directly to the baroque era” (we’re paraphrasing, but she essentially said this). YES. THERE WAS NO RENAISSANCE IN BETWEEN. Thank you for our history lesson, Project Runway.

Anyway, so the designers are challenged to make couture gowns that are modern but draw on baroque design. Designer Sam explains that baroque means lots of lace, lots of detail, lots of everything. They’re given $300 and two days to do this. Oh, and the winner of the challenge would get to co-design something for fashion design house Marchesa (one of the house’s designers is a judge on the show).

So, various designing-while-watching-the-Medieval-Times-show, drama, and sewing ensues, and finally, here’s what the designers come up with: 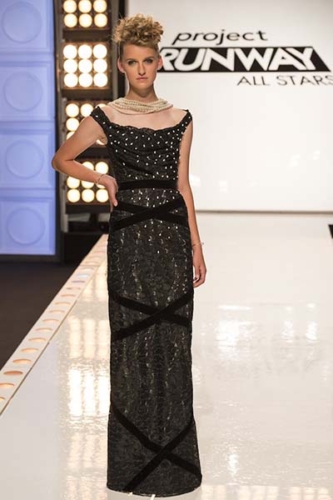 I have a feeling I’m going to be asking “how is this medieval baroque?” a lot… — Sarah
Um, they had pearls in the medieval baroque period? — Trystan
I like that the fabric has texture. Would have worked much better with HUGE skirt. — Kendra 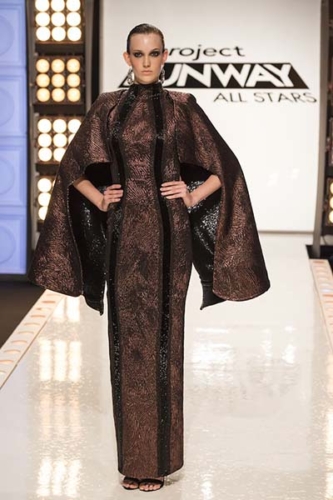 I’m guessing the designer was going for Japan, because that’s really not medieval baroque in the least. — Sarah
Capes! Capes are inherently historical!  — Trystan
It seems more Game of Thrones-y to me. (FYI, this was the winning look.) — Kendra 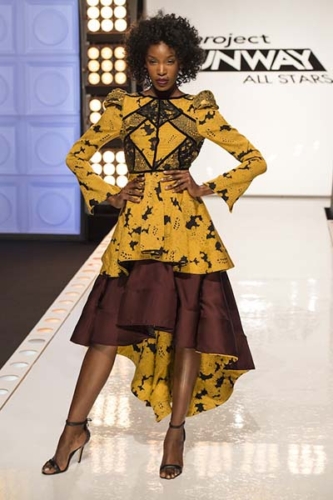 WHAT THE FUCK? — Sarah
No clue. — Trystan
The judges hated this, but I actually kind of liked it. Apparently the fabric sucked in person. But I think the gold lace on black print certainly seems oldey-timey in a non-butterchurn-y way. And the puffed sleeves and full skirts also seem more baroque than the narrow silhouettes above. — Kendra 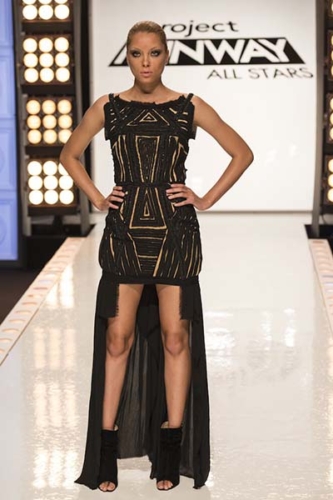 No. Just… No. — Sarah
Whoever said high-low hemlines are baroque needs a smack to the head. — Trystan
They did glued-on macaroni art in the baroque era? — Kendra 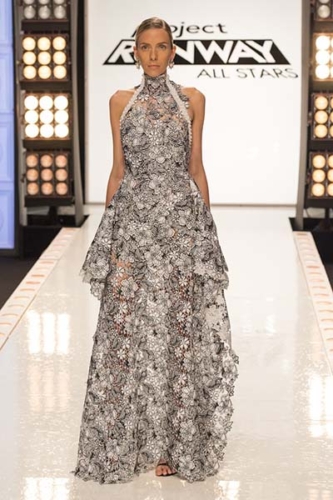 I think there’s been some kind of mistake. — Sarah
I don’t think they’d even use this on Reign. — Trystan
The judges loved this one too, and I SO don’t get it. This just screams Ibiza to me. — Kendra 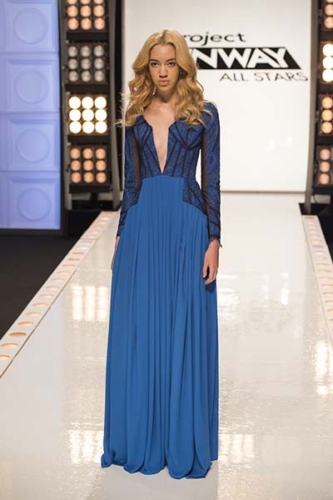 Ok, I think I can detect a flavor of something ever so vaguely Elizabethan here. — Sarah
Since when is sternum a baroque erogenous zone? — Trystan
So at least Valerie went for a faux-corset look with the applied black ribbon? — Kendra 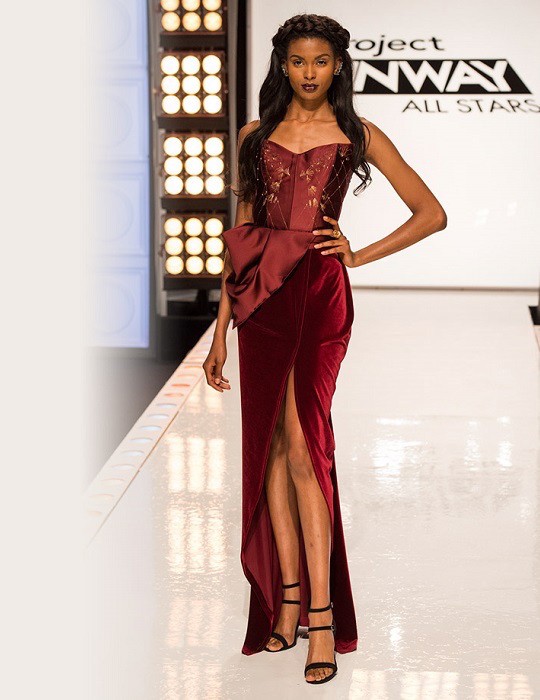 Ugh. — Sarah
Tragic David’s Bridal mishap. — Trystan
I don’t love it, but it does seem more baroque-y than a lot of these. Maybe with a skirt that went better with the top and peplum? — Kendra 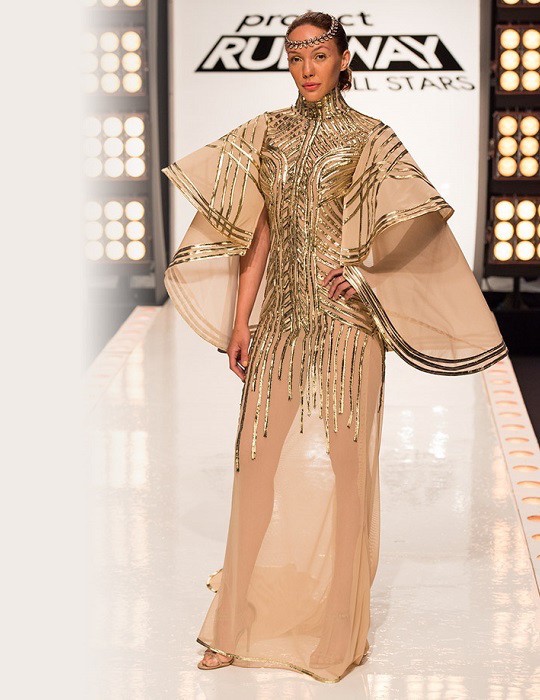 I would love this if it had nothing whatsoever to do with the theme it’s allegedly based on. — Sarah
I take back what I said about capes. — Trystan
BAROQUE IN SPACE!!! — Kendra 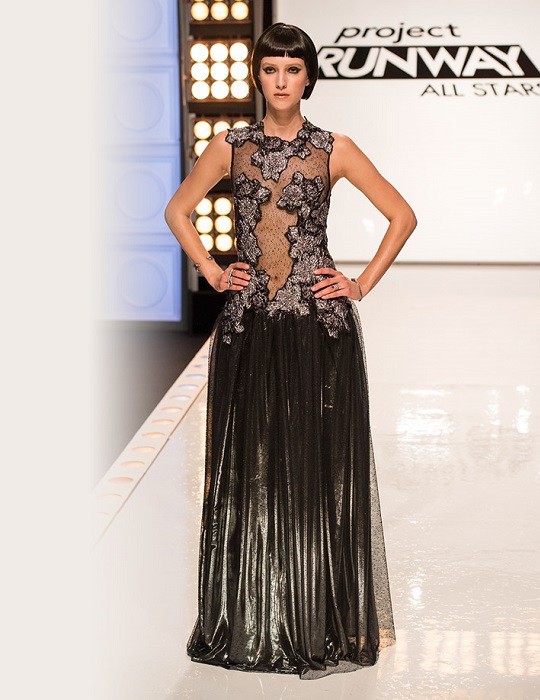 I shit you not, I made a dress almost exactly like this for my senior project in design school. It didn’t go over well. — Sarah
This even fails as a riff on 1920s fashion. — Trystan
The skirt has potential. The appliques on the bodice have potential. They just need to be combined in a totally different way. — Kendra 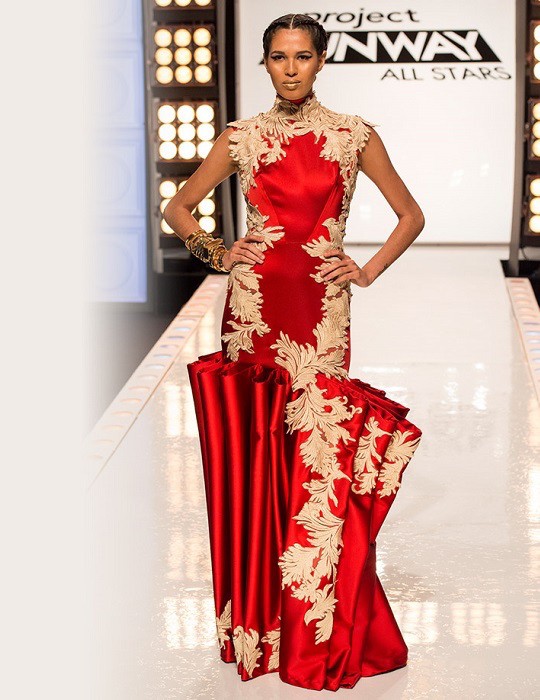 Ok, maybe I’m delusional, but I can actually sort of see where Kini was going with this: the 16th-century ruff as inspiration for the skirt treatment. — Sarah
I can see that too (that’s TOTALLY Kini’s thing), but why did he stick the ruff into a cheongsam? — Trystan
First of all, someone did an umbrella skirt the week before. Secondly, why is the umbrella top leaning to her left/our right? Thirdly, the appliques were a good idea but need to be placed in a totally different, less clunky manner. Fourthly, I guess red satin and gold lace is baroque-ish? — Kendra

According to the Project Runway judges, Ken was the winner, while Valerie and Sam were runners-up; the loser was Mitchell, with Layana and Alexander sharing the same of being on the bottom.