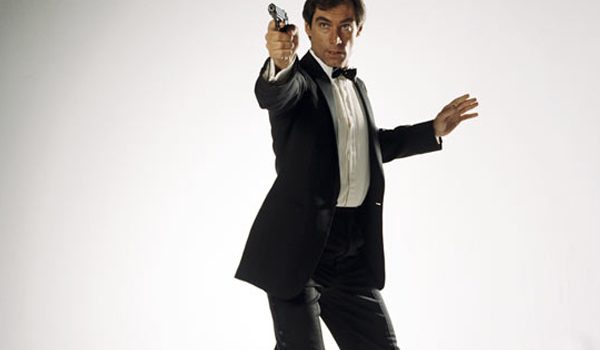 Here is your Snark Week sloppy seconds. Timothy Dalton is not an unattractive man. He’s not a bad actor. And yet… And yet… And yet he has chosen to appear in a whole bunch of crappy historical costume movies and TV shows. The kind of things you hide on your resume that lurk in the deep, dark places on YouTube — but they’re the stuff we here at Frock Flicks dig up and snark. He had a nice run as James Bond from 1987 to 1989, but, dayum, he sure took some stinky acting jobs before, during, and after 007.

We’re sorry, Tim, we can’t help but point these things out. We’re sure you’re a very nice fellow, you’re probably kind and generous and super studly and a fine Shakespearean-trained talent and all that, but were you so desperate for cash? Let’s hope these weaksauce gigs helped you support an ailing mother back in Wales or something. OK, he starts off pretty good. This is a fantastic movie, one of our faves, full of sarcastic wit delivered by a troupe of stellar actors. It’s just that Dalton is cast as the sleazy gay-for-pay French king. I admittedly don’t remember him at all in this sprawling epic about the English Civil War. His character was some kind of general in some of the endless battle scenes. Here is where the horror show starts. First, it’s one of the worst Wuthering Heights adaptions around, with an abbreviated script and crap costumes. Then Dalton is totally wooden as Heathcliff. UGH NO. Darnley is rarely portrayed with any nuance, but at least Timothy Dalton gives it a shot here. He’s not a simpering cliche, more of a simple-minded drunk.  I guess it could be worse? Never saw it, but this was one of those dorky-looking historical TV miniseries (this one about Colorado statehood, oh boy), so I don’t expect much. I really tried to watch this movie, but ugh, boring (wait for it to show up in an Oh the Bad Movies You’ll Watch round-up!). Timothy Dalton plays Agatha Christie’s pompous, cheating husband, and the flick recounts her mysterious disappearance in 1926. A TV adaption of a Barbara Cartland novel, Dalton plays an English duke about to marry an American heiress around 1900 — can you doubt the shmaltzy cheesiness? Love!!! This could redeem all the rest of the poor casting choices because Timothy Dalton is such a fantastic Rochester in this absolutely book-perfect and historically perfect TV miniseries of the novel. Tim, you should’ve stuck with the BBC and taken roles in all their costume dramas for the next few decades! Steady work that you were clearly destined for! Did Hollywood pay more? Did you crave L.A. sunshine? What happened? Such a missed opportunity. sigh

Col. Francis Burke in The Master of Ballantrae (1984) On the one hand, this stars Michael York, John Gielgud, and other fine actors. On the other hand, I can only find really shitty screencaps of Dalton in this TV adaption of the Robert Louis Stevenson story. So I’m suspicious that it sucks hard. Juicing up the romance angle of the Lady with the Lamp, Timothy Dalton plays Nightingale’s rejected suitor in this generally well-received TV biopic.

Doctor Thomas Rock in The Doctor and the Devils (1985) A 19th-century grave robbing story based on the Burke and Hare murders, this looks like something I should track down, actually! He looks cute, doesn’t he? Deceptive. This is the movie that reminded me we needed a Timothy Dalton Man Candy Monday. Click the title to read Sarah’s play-by-play.

Neville Sinclair in The Rocketeer (1991) In this 1930s sci-fi flick, Dalton does a fine job as a mockingly awful bad guy, a Nazi secret agent who gets himself blown up by the rocket itself. He tries to impersonate Clark Gable, but in this TV miniseries, it’s Sean Bean I’m rooting for Scarlett to hook up with, sorry! Dalton got pretty good reviews in this ABC/Hallmark TV miniseries of the same old story. He gets a pass here. But just when you think he’s upped his game, nope. IMDB says this was actually filmed in 1996 and not broadcast until 1999, which just adds to how stinky it must be. A romantic triangle set in 1900s France, that someone on the Internet felt necessary to create a giant photo montage for. A positive note to end on — Timothy Dalton’s Sir Malcolm is a seasoned explorer, a father figure, and vampire hunter. His aspect is troubled, even tortured, but he’s wily and a badass as needed. After the ups and downs of three seasons deep in this gothic Victorian horror TV show, he’s one of the few left standing.