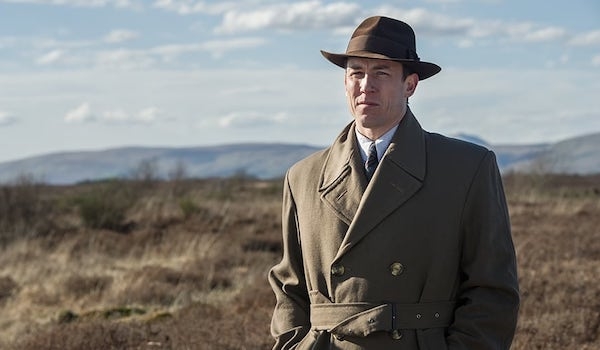 The whole time I’ve been watching Outlander (2014-), I’ve struggled with the fact that I am 100% Team Frank. It’s not easy being basically the only person out there who isn’t thirsty for some Scottish beef (though, don’t get me wrong, Jamie is absolutely eye-candy). It probably doesn’t help, either, that Frank (played by Tobias Menzies) is the fictional analogue to my fiancé, right down to the jauntily cocked fedora. Clearly, something about the lanky, intellectual type does it for me.

So, for this Man Candy Monday, let’s show Frank Randall a little love.

You know Frank would be down with the Frock Flicks mission

Frank is has a Ph.D. in History from Oxford. This is a man who understands that HISTORY IS NOT TO BE FUCKED WITH. Unfortunately, his wife failed to get the message, and she winds up both fucking history, and getting fucked by it, and ultimately bearing its child. Which leads to…

Say what you want about his marriage, Frank doubles down and raises another man’s child, loving her as if she were his own, because he’s fundamentally a Good Person.

Sadly, we don’t get more than a backstory involving Frank’s wartime spy-work and subsequent MI6 involvement. But we do get glimpses, particularly in the first season before Claire ends up emotionally ditching Frank for Jamie.

He really does love Claire Which blows because she’s sticking it out with him out of an obvious combination of guilt/duty/societal pressures. Only when he [spoiler alert] dies, does she finally have within herself to admit that she loved him very much.

I’ve always had some issues about how Claire perceives and treats Frank, particularly once she comes back from the 18th century. And I’ve had many an Outlander fan explain to me that it’s not that Claire doesn’t love Frank … It’s that Jamie is her soulmate. Sure, I get it. I’ve had connections with people that literally altered the landscape of my entire existence, but I still can’t get why Claire just doesn’t cut Frank free.

I get why she stays at first, thinking that they can reconnect and raise Bree, but it’s obvious right away that Claire’s just not into it. So, Frank puts her through med school, raises her kid as his own, respectfully tries to keep his infidelities away from her so she can pretend she’s living in a perfect marriage, but … in the end, it’s just Frank slowly killing himself just to make someone happy who is never going to be happy with him. When Frank actually asks for a divorce, I practically cheered. Then he promptly died. So … never mind?

I have zero sympathy for Claire here.

Who’s got a soft spot for Frank?