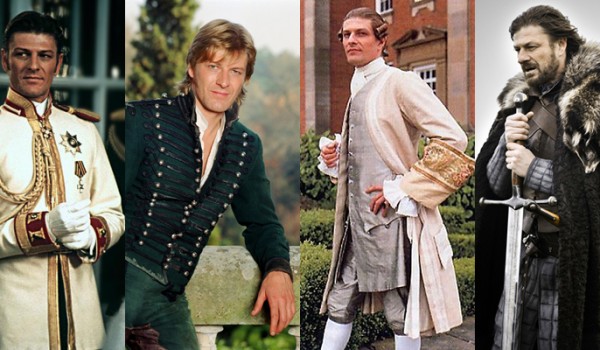 One does not simply have a Man Candy Monday without Sean Bean. We’re sorry we’ve gone this long without him! Though we’ve celebrated his birthday on Facebook, it’s about time we gave him his due here on the blog. Thus, here’s the Frock Flicks guide to Sean Bean in historical costume movies, chronologically arranged… The title character is the famous 17th-century painter, and Sean Bean plays one of his models and lovers. The costumes are by Sandy Powell, but who’s looking at the costumes here? A TV miniseries set in 1919 Ireland. Never heard of it, but Bean looks good in a uniform (this will be a running theme in Sean Bean historical costume movies). A romantic TV movie set in northern England around 1900. Another one I’ve never heard of, but it was apparently nominated for an Emmy. This is my buckle, & verily, I shall swash it. Another villain, this one dressed in fine silks and fancy wigs. Here, Sean Bean is an elegant rake in this excellent TV miniseries, based on Samuel Richardson’s 18th-century tale. The first of 16 TV movies (the last was in 2008) about this ruggedly awesome British soldier during the Napoleonic wars. Who wouldn’t cheat on her husband for Sean Bean? This historical costume TV miniseries, based on the D.H. Lawrence novel, makes a good case for adultery.

Set in 1870s England, the story is told from the horse’s point of view. Here’s a picture of Sean Bean and the horse, for thems who like that sort of thing. This TV miniseries is based on a book that tells what happened after Gone With the Wind ends. Like many of these kinds of stories, it’s pretty cheesy, but Sean Bean as one of Scarlett’s suitors is still hot. As Kendra has said before, this is the only Anna Karenina you’ll ever need to watch, not the least of which is because of Sean Bean as Vronsky. OK, not a historical costume movie, but it’s a great costume and role, and Sean Bean’s lines are totally iconic. In the second episode of this miniseries, Bean’s character leads the Pilgrimage of Grace against King Henry, which leads to Robert Aske getting executed. Yep, it’s a theme in his TV and film roles. At least Sean got a decent costume.

For the Trojan War, Sean Bean gets to be the king and fight the good fight. A horror film set in 1348 during the plague … hmm, even starring Sean Bean, this historical costume movie hasn’t been high on my list. Anyone see it? The story of Ian Fleming’s commando unit in World War II, this is more of the hot Sean Bean in uniform action we know and love. Again, not strictly historical, but how can you not love noble, doomed Ned Stark? Winter is … oh you know.

This six-part historical costume TV series starts in the U.K. later this year (no word on when it’s coming to he U.S.). It’s set in 1827 London, and Sean Bean plays an inspector looking into horrific crimes.