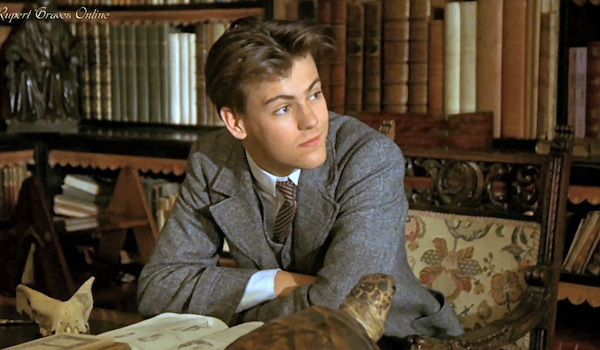 We’ve already discussed my undying love for Rupert Everett, but there’s another gorgeous Rupert that has had a nearly ubiquitous presence in historical costume flicks since the early 1980s, and that Rupert is Rupert Graves. Currently best known for his role as Detective Inspector Lestrade on Sherlock, his costume drama cred is legendary, so let’s take a look back at some of my favorite Rupert Graves roles over the last three decades… Yeah, there’s costumes in this film, but be honest. The only thing anyone really remembers is a naked Rupert Graves frolicking in the water. This coming-of-age-and-sexual-discovery film was based on the novel of the same title by E.M. Forester. Rupert Graves plays the rogueish Alec, a young man who falls in love with the film’s namesake, Maurice. It’s a lovely film, made lovelier with the presence of not just Rupert Graves, but Hugh Grant at his prettiest as Clive, Maurice’s initial love interest, and nommy James Wilby who plays Maurice. Fun fact: Rupert Graves reunites with Maurice co-star James Wilby in this film about a tortured marriage and a love affair that basically destroys it. This time they’re both vying for the attention of a woman, rather than one another. No happy endings here, but the costumes are effing fabulous. Costumer Jane Robinson lost to James Acheson for Dangerous Liasons at the 61st Academy Awards, however. Then again, it’s really hard to compete with Dangerous Liaisons. This film happened to coincide with the 16th year of my life. Let me just say it was very memorable on the account of Rupert Graves playing Greville, and who is directly responsible for my obsession with 18th-century men on film. Or really, 18th-century men. Oh, hell. Just men in general.

The Tenant of Wildfell Hall (1996) – Huntingdon I’ve mentioned this one in my Man Candy Monday tribute to Toby Stephens, so there’s no need to really rehash the whole spiel about how ridiculously attractive both men are in their 1840s costumes. You can see for yourself, as that is one really, really, ridiculously good looking Rupert right there. I am conflicted about The Forsyte Saga. Parts of it really drew me in, but the whole thing was so long, and fraught, and Irene Forsyte was so drippy and yet the whole show basically revolves around her and her epic levels of repression and poor decision making skills that it wasn’t exactly enjoyable in the long run. That said, the bits that dealt with Young Jolyon, Irene’s paramour and cousin-in-law, were at least pleasant to watch, because Rupert Graves. I love this miniseries because it stars my boyfriend with the weird eye, Rufus Sewell, as Charles II, and my other boyfriend Rupert Graves as his BFF George Villiers, Duke of Buckingham. The costumes are kind of a toss up between weird-probably-rented-vaguely-appropriate-looking to downright fucking amazeballs fabulous, but honestly, I really am not watching it for the clothes. I’m watching it see Rupert Graves and Rufus Sewell get it on with various and sundry beautiful ladies. Including one memorable discussion between Barbara Villiers and Buckingham that takes place with Rupert’s face between Helen McCrory‘s legs.

And I think I’ll just leave you there with that image, and close this little celebration of Rupert Graves’ costume drama career with one question:

Who is the hotter Rupert? Everett or Graves?