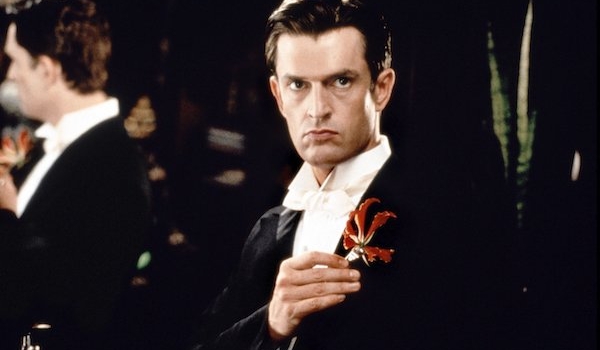 Rupert Everett never made a secret of his sexuality, which is pretty noteworthy during the last couple of decades where gay men and women are routinely not cast in straight roles for fear that the audience won’t believe the chemistry between heterosexual characters if one of the actors is openly homosexual (ridiculous, no? I mean, after all they’re actors). Well, Everett pretty much bombs that idea to hell. He’s a gay man who can play straight roles better than most straight men. He positively smolders on screen when cast opposite female love interests, as well as in the films where he’s played a gay character. If his career has suffered for the fact that he never remained ambiguously or fully closeted, well, all I can say is he hasn’t done half bad. So, let’s take a look at his body… of work… in historical costume flicks! 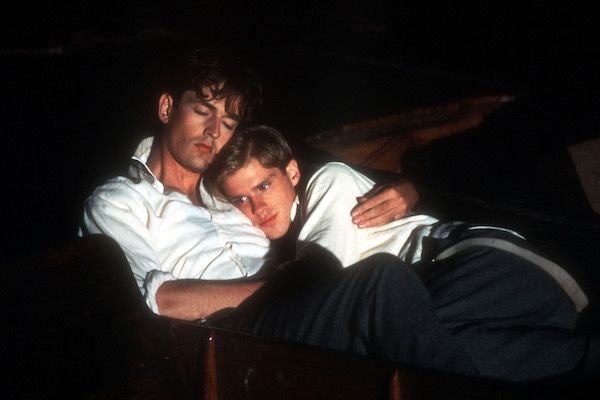 Rupert Everett and Cary Elwes are angsty intellectual lovers! Boys engaging in homosexual shenanigans at a college-that-is-totally-not-Eton! There’s Colin Firth as a young Marxist idealist! I know this is a Serious Film(TM) but I feel compelled to point out: RUPERT EVERETT/CARY ELWES. BTW, this wouldn’t be the last time Firth and Everett show up in the same movie… 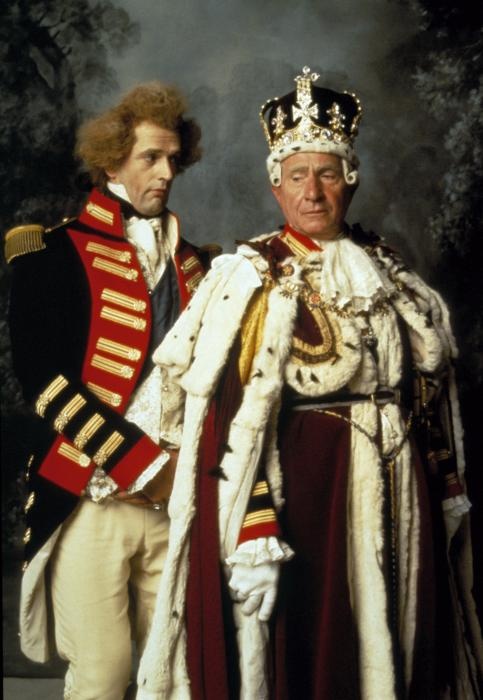 At a time in his career when he was at pretty much peak sexiness, Rupert Everett was cast as the fat, hedonistic, aging playboy Prince of Wales in The Madness of King George. We’ve discussed the movie here, and if you haven’t watched it STOP EVERYTHING AND WATCH IT NOW. In a cast packed to the rafters with stellar talent, it’s Everett’s sympathetic and fully ridiculous performance as “Prinny” that is one of the best in the movie. 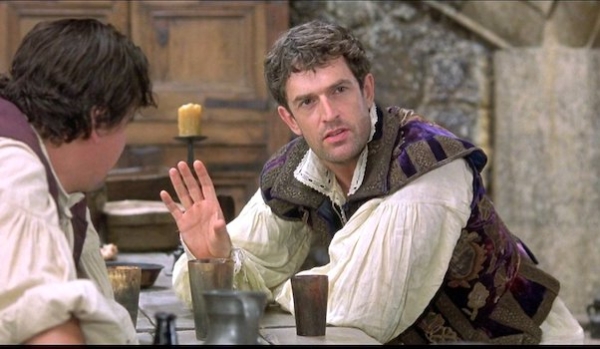 Fun fact: Rupert Everett was uncredited in what amounts to a handful of scenes in this wildly successful film. I wish that Marlowe had more of a presence, but obviously that would have made the film far too much about Marlowe who was the legit enfant terrible of the early modern English playwrights, and less about trying to make Shakespeare the bad boy. I’ll overlook the fact that Everett is about a decade-and-a-half too old to be playing the young badass who died in a barroom brawl at the tender age of 29, but eh, whatever. It’s Rupert Everett! 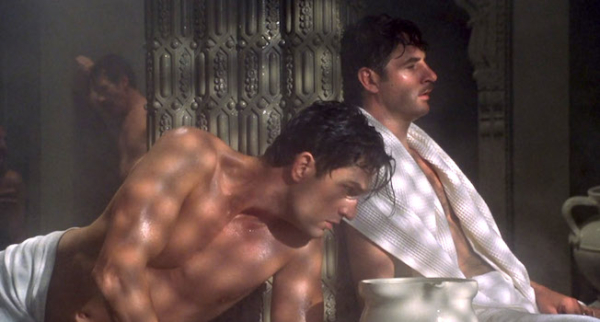 The first of two Oscar Wilde stories filmed in the mid-to-late ’90s and featuring Everett, An Ideal Husband is fun and flirty. And the costumes are fabulous. We’ve already covered the film here, so go check out the full review with costume analysis. In the meantime, I’ll just leave this photo here as a preview of the insane levels of man candy in this film. 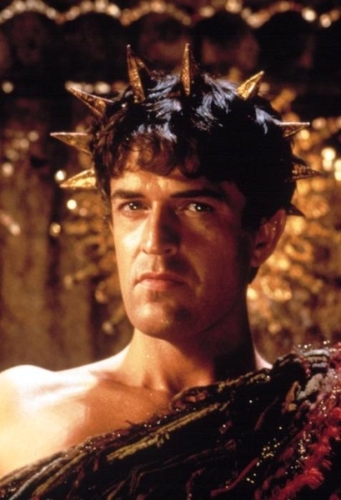 Ok, so it’s not REALLY a historical movie, but how can you not include Oberon in a list of costume flicks featuring Rupert Everett??

The Importance of Being Earnest (2002) – Algernon 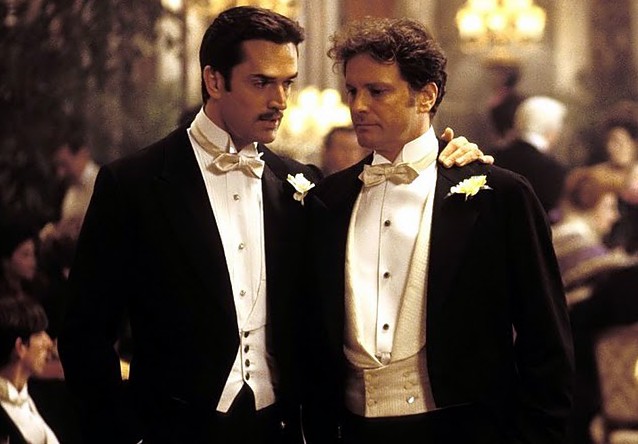 The second Oscar Wilde adaptation featuring Everett, and another pairing with Colin Firth. Like its predecessor, An Ideal Husband, this film offers wall-to-wall Hot Men in Suits Action, interspersed with some lovely belle epoque women’s fashions. 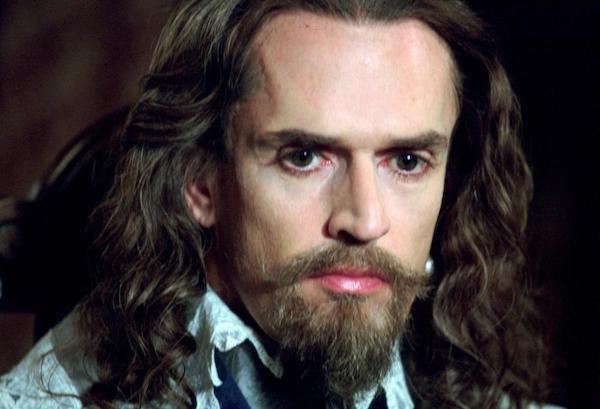 I need to track this film down because men in big, fat-bottomed wigs? HELL TO THE YES. Costumes look pretty damn good, too. Tim Roth plays Cromwell, and Dougray Scott plays Fairfax, and we really need to devote some Man Candy Mondays to both of those guys now that I think of it… 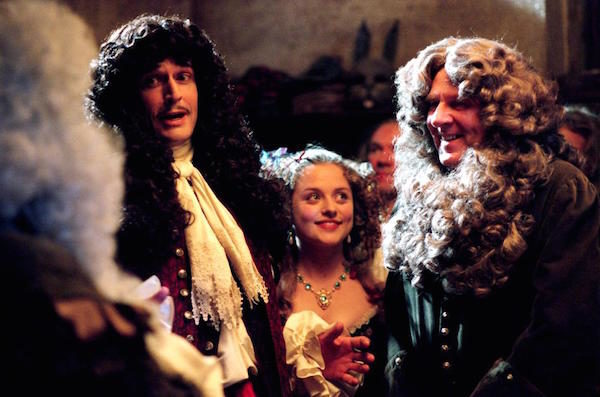 Another underrated film that is well worth watching, this is the second film that features both Claire Danes and Rupert Everett (the other being the also-wildly-underrated Stardust). Everett does a stint as Charles II, but this time plays him as more of a comedic character with a penchant for cross-dressing. Something which is NOT to be missed. 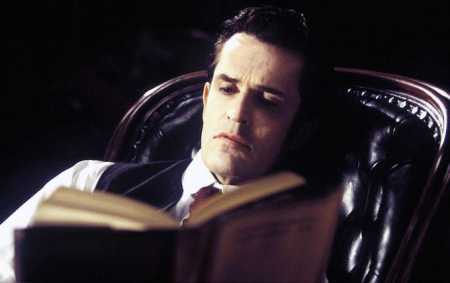 Here we see Everett back to playing the suave, sophisticated heroic type that he does so beautifully. I have a sneaking suspicion that this was Everett’s screen test for a possible turn as James Bond, as he pulls off the most James Bond-y Sherlock I’ve ever seen on film. I think it’s the whole “OMG, RUPERT EVERETT IS UNAMBIGUOUSLY GAY AND WE CAN’T RISK THAT IN A BOND FILM” bullshit that means we will likely never get any closer than this film to seeing him play Bond. Bummer. I’d watch the shit out of Rupert Everett as James Bond. Of course, we all know that women are not the target demographic for the Bond franchise, so I guess it’s a moot point. 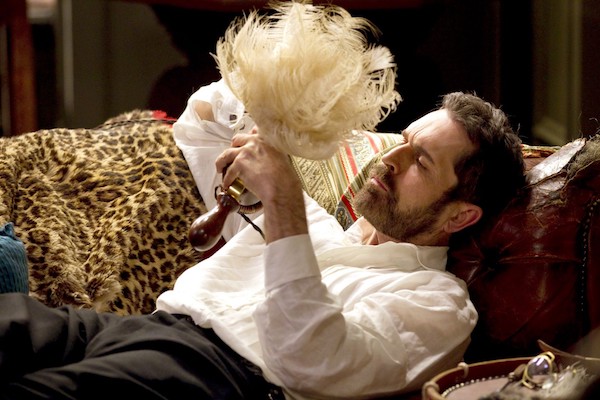 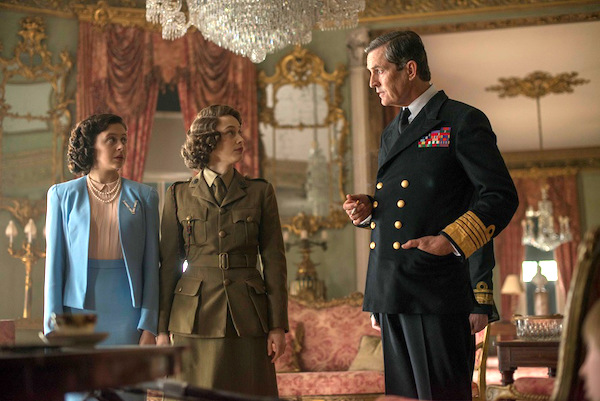 This film is set to premiere in the U.K. on May 15, 2015, and there’s no U.S. release date yet. We will probably have to wait for it to be released on video before we see anything of Rupert Everett as George V, playing the father to the two Princesses Elizabeth and Margaret.

Did we forget your favorite Rupert Everett film? Tell us in the comments!