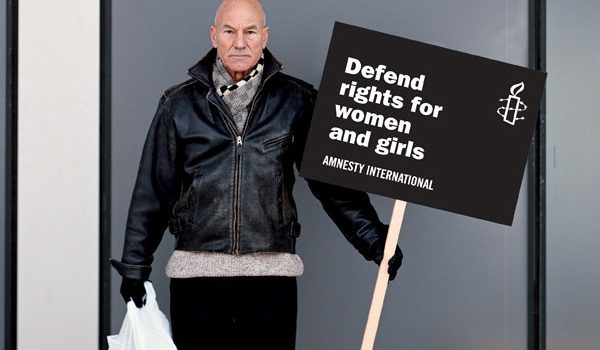 More than just Captain Jean-Luc Picard and Professor Charles Xavier, Sir Patrick Stewart is a classically trained actor with a long resume in historical costume movies and TV shows. He was a member of the Royal Shakespeare Company from 1966-1982, and in 1987, he rather accidentally took the part in Star Trek: The Next Generation that catapulted him to worldwide fame. Stewart may have lost his hair when he was 19, but he’s been undeniably sexy all his life. His activism against domestic violence (inspired by unfortunate events he witnessed as a child) and declaring himself a feminist and a socialist makes him even more attractive. Man Candy Monday? Make it so! Well-reviewed BBC miniseries about the period between 1880-1917 and the collapse of the Romanov, the Habsburg, and the Hohenzollern dynasties. Obviously, Stewart’s Lenin is a key, but minor part in the drama. Patrick Stewart plays the same role Richard Armitage does in this first BBC miniseries of the Elizabeth Gaskell story, and he’s just as swoony in the trailer, so I’m adding this to my list now! Continuing to rock it with the BBC miniseries, Stewart’s Praetorian guardsman is wily and power-hungry, trying to make a name for himself in the political hotbed of Rome. At the Royal Shakespeare Company, Stratford-upon-Avon, nope, it’s not a historical costume movie or TV show, but HELLO, SAILOR.

Claudius in Hamlet, Prince of Denmark (1980) Perhaps the earliest of Patrick Stewart’s Shakespearean roles I can find on video, this version of the play stars Derek Jacobi as Hamlet. This is really a fantasy movie (and, unlike everyone else in the SCA, I can’t stand it), but Patrick Stewart being a badass in armor, so OK. I love Patrick Stewart in this role. Not only does he look FABULOUS (of course he can pull off Tudor garb perfectly), but he’s the kind, slightly hen-pecked dad who’s sorry his wife beats Jane and makes up for it by raising an army when his daughter’s brief queenship is deposed. And he loses his head for it. Awww. Wait, wut? Thought we weren’t going to talk about this because it’s sci-fi, right? Except we can’t forget the Holodeck (which we’ve mentioned before is a site of surprise historical costuming). Picard’s own favorite holo-novel series was about a 1940s noir detective named Dixon Hill — who shows up again as a plot point in the movie Star Trek: First Contact (1996). He also showed up in other people’s holo-fantasies (such as a Cavalier fencing instructor) and, of course, Q’s holo-tortures (like Robin Hood). Kevin Costner had Sean Connery — in the parody, Cary Elwes has Patrick Stewart. Not sure who got the better end of the deal, except nobody wants Costner, that’s for sure. The first post-ST:TNG movie kicked off with an epic Holodeck scene on a Napoleonic tall ship named the Enterprise, and the whole crew is in period military uniforms. Captain Picard looks snazzy, making me wonder why Patrick Stewart wasn’t in any of those Horatio Hornblower-type flicks. Stewart is so literary, and I love him for it! Even if it’s not my favorite book, he’s the ideal Ahab in this TV miniseries. Trust me, it’s more about obsession than (ew) killing whales. One of the best far-too-many versions of Dickens’ holiday deal. Stewart makes for an enjoyably menacing Scrooge, so his redemption feels that much more genuine. The actor also created a one-man stage play of A Christmas Carol where he played all the parts, because he’s just that good. If we had to have a remake of the 1968 classic, this TV movie starring Patrick Stewart and Glen Close is a pretty damn good way to go. The entire Hollow Crown series appears to be an excuse for the best of Britain’s old-school Shakespearean actors to show some of today’s big-name British stars how it’s done.

William Shakespeare in Bingo: Scenes of Money and Death (2012) Stewart has performed this 1973 play by Edward Bond several times, and I just love seeing him in period costume from a show at the Old Vic Theater.