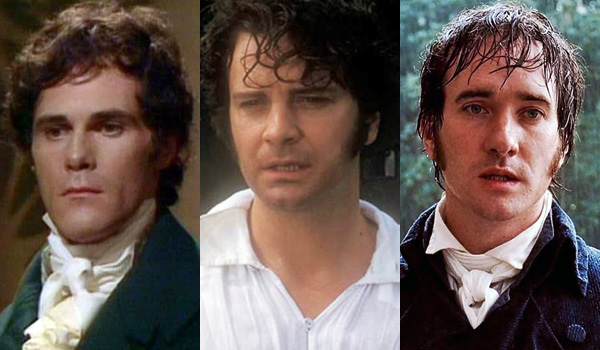 Who looks all the more handsome for having £10,000 a year? Who detests dancing even though he’s always hanging around balls? Who puts the “pride” in Pride and Prejudice? Mr. Fitzwilliam Darcy, that’s who! Jane Austen writes him as “having a most forbidding, disagreeable countenance” and he’s rude to most everyone, plus he treats his BFF Bingley like a child who can’t sort out his life for himself.

But onscreen, Mr. Darcy becomes a bit more palatable when we have dishy fellas playing his grumpy-then-smitten-and-noble act. Everyone has their favorite version, and while I suspect one rises damp-shirted above the rest, ehem, I’ll entertain discussions of other actors’ merits for this Man Candy Monday. So let us compare with some hot Darcy-on-Darcy action!

Laurence Olivier in Pride and Prejudice (1940) David Rintoul in Pride and Prejudice (1980) Colin Firth in Pride and Prejudice (1995) Who is your favorite Mr. Darcy on screen? Why?