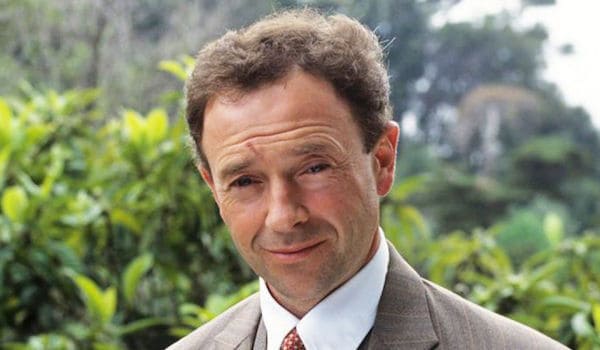 You guys made me so happy on my Enchanted April post, when you agreed that Michael Kitchen was dreamy and Man Candy Monday-worthy! He’s just so damn charming — okay, or the characters he plays are. But he adds a gentle kindness and a crinkly smile that just make me weak. My faves are The Buccaneers and the afore-mentioned Enchanted April. Let’s enjoy some MK, shall we?

A long, historically accurate, sometimes boring telling of the story of the three Brontë sisters, and their brother Bramwell, played by Kitchen. The patriarchy can be sensitive!

According to The Guardian, this ranks amongst the worst of British period drama: “Supposedly a 26-part series of historical dramas, each recalling a seminal moment in the history of Britain, the series was bogged down by cheap sets, confused performances and a dismal over-reliance on expository dialogue” (From Churchill’s People to SS-GB: the worst period dramas of all time). Kitchen plays John Wilmot, Earl of Rochester (you know, the “libertine” of Johnny Depp movie fame). Okay, so 100 years too early to be the Earl of Rochester, but that guy on the right looks kind of like Kitchen?

A BBC mini-series following the ruling dynasties of Austria-Hungary, Germany, and Russia from 1848 through the end of World War I in 1918. Kitchen plays a young Leon Trotsky. Designing Communism with a massive mustache! I do like the glasses tho… A TV miniseries about the life of the father of psychiatry. Kitchen plays Freud’s good friend Ernst von Fleischl-Marxow, “Austrian physiologist and physician who became known for his important investigations on the electrical activity of nerves and the brain,” per Wikipedia. All I can find out is that it’s a TV movie! The photos look vaguely 1940s-ish? Yep, Kitchen is in this! He’s Redford’s bestie, Berkeley Cole, who clearly has a little bit of a thing for Streep’s character. On the left, playing second fiddle to Redford. GO FOR BERKELEY, MERYL!! He does rock a mustache rather well.

Daw! Bleak Englishwomen escape to Italy in the 1920s; Kitchen’s character owns the castle they rent. He helps more than one of them rediscover their joie de vivre. Kitchen plays Major Herbert Rowse Armstrong, a real-life solicitor accused of killing his wife and a colleague in 1922. Based on the Robert Louis Stephenson novel, set during the Jacobite Rebellion in Scotland (1745). Kitchen plays English officer William Reid. Okay, but I found a gif in which it looks like he’s wearing nylon tights, so…

The other reason for my love of Michael Kitchen! While the four young women are at the forefront of the story, there’s a sweet sub-plot in which governess Laura Testvalley falls in love with the father of her charge’s suitors (Kitchen). Who charms my socks off.

Four brothers try to save their farm during the Irish Potato Famine of 1846. Kitchen plays the baddie land agent. In a stovepipe hat!

The post-World War I novel by Virginia Woolf; Kitchen plays a past suitor to the title character. As kindly Mr. Brownlow, adoptive father to Oliver, in this adaptation of the Dickens novel. An adaptation of the classic novel set in the late 17th century. I’ve never read it or seen any adaptation, the shame, so I can only tell you Kitchen plays “Judge Jeffreys.” Set in the early 19th century, Kitchen’s character is sent to prison, leading to a downward change in circumstances for the rest of his family. How could you, pops? I need that red coat! A young British man escorts Marilyn Monroe around England in 1957 while she’s working on The Prince and the Showgirl. Kitchen plays producer Hugh Perceval. That’s him, next to Branagh.

A just-post-World-War-II Paris couture house. Kitchen guest stars on one episode as “Lemaire.”