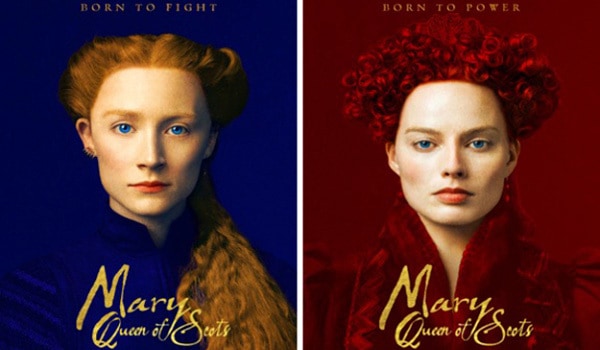 Yes, your resident Mary Queen of Scots expert / fan / apologist has bitched about the official photos of that upcoming MQoS movie and the behind-the-scenes photos. Well, now there’s a trailer, and it’s just as fucking tragic as I expected.

Not just the costumes — which, honestly, you can barely see in this dark and broody 2:47 minutes — but the obvious glaringly inaccurate story and plot points that have been revealed. To wit:

Mary Queen of Scots should not have a Scottish accent 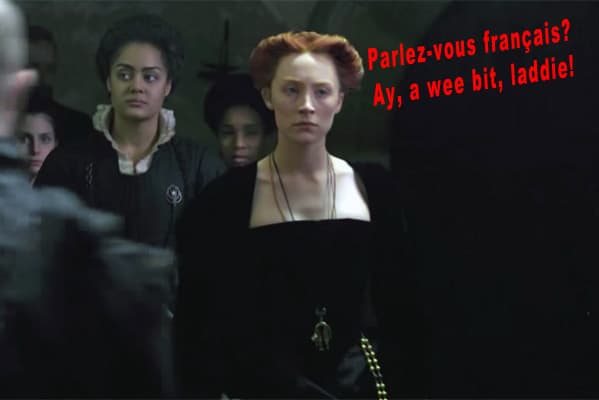 Mary was 5 years old when she left Scotland for France. She spent the following 13 years at the French court where she eventually married the Dauphin and was briefly Queen Consort of France. French was her language of choice all her life — most of her personal letters are in French, and the poetry she wrote is in French.

Yes, of course, she spoke and read English fluently and also spoke and read Scots fluently (this is not just the dialect, but a language variety spoken in the lowland area of Scotland, distinct from the Gaelic language spoken in the highland areas). But it’s pretty damn likely Mary would have spoken English or Scots with a French accent. Not the other way around! 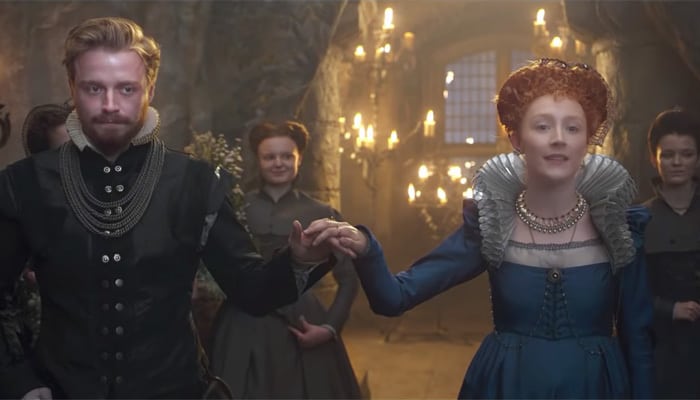 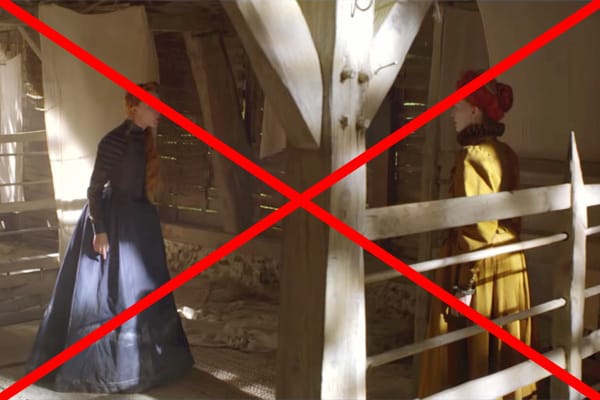 Mary and Elizabeth wrote each other extensive letters throughout their lives. They sent each other portraits. Elizabeth, in particular, was keenly interested in what Mary looked like and how the two compared in physical traits and accomplishments. Queen Elizabeth always appeared a bit ruefully jealous that Mary married and had an heir, while Elizabeth declined both options.

When Mary Queen of Scots abdicated her throne and escaped to England, she sought refuge and assistance from Elizabeth. The English queen sent representatives to deal with the Scottish queen, and Mary soon found herself a prisoner until, 19 years later, Elizabeth signed Mary’s death warrant and had Mary Queen of Scots executed. 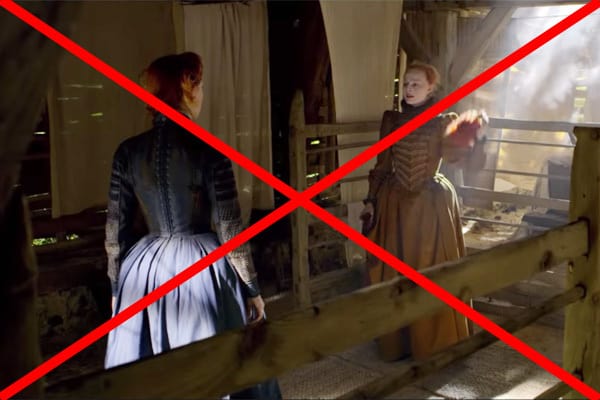 But never, not once during that entire time did they meet in person. No visits, no chats, no peek through the window. Total fiction, folks. Yes, it happened in other movies, and it was wrong then too!

Look it up in a history book, not another fucking movie, people!

OK, there’s more than just the story stuff that’s annoying. The costumes still piss me off. So lemme repeat myself… 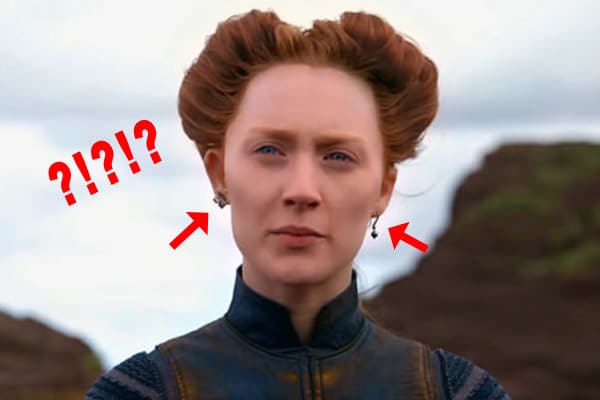 This is not a 16th-century French or Lowland Scots style, the mismatched earrings, nope, it’s not. Look, I discussed this back when the very first promo pix came out. But it’s pretty damn egregiously modern, so I’m going to repeat what I said then: 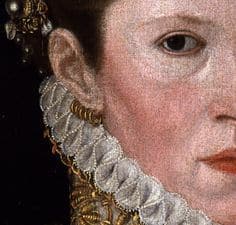 It’s a close crop of this portrait of Maria of Portugal, Duchess of Parma, circa 1550, painted by the workshop of Antonis Mor. Using one or two images from kinda-sorta the period but in a different geographical area doesn’t prove jack shit. Parma is in Italy, not Scotland, France, or England, any of the historical places Mary Stuart would reasonably be expected to take her fashion cues from. ALSO, we have a very well-documented list of legit contemporary portraits of her showing, as I said, ONE set of ear piercings — here, I’ve collected the images all on Pinterest because, yeah, it’s my jam.

In the promo pix, I faintly wondered if it was an accident, the actress forgot to take them out for the photo. But oh no, every damn closeup in this trailer shows the five silver rings in her right ear. DA FUQ?!? 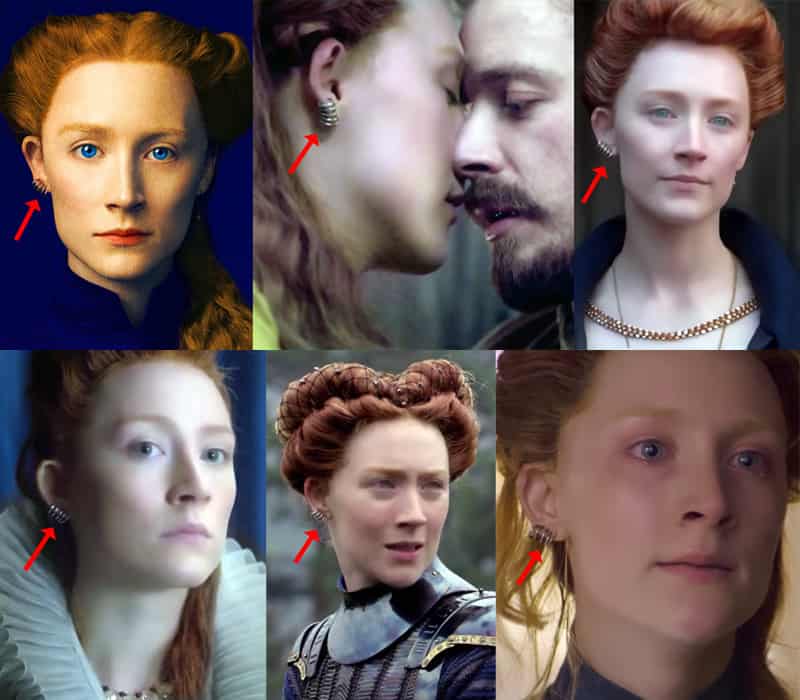 The 16th-century hair hodgepodge is ridiculous

Much like Kendra has a thing about hair from the 18th century on, I’m into 16th-century hair. It’s wacky and wonderful, and yes, kinda weird, but that doesn’t mean movie-makers have to just throw it all together willy-nilly. Different styles were worn by different people of different class stations in different geographic locations at different times for different reasons. You can’t just mix and match. It’d be like taking all the hairstyles in the 20th century — pincurls, bobs pompadours, flips, afros, hippie hair, Farrah Fawcett wings, headbanger curls, the “Rachel-from-Friends” cut — and put them together in the same movie about the same people that’s supposed to take place over the course of a few years. Yeah, it’d look stupid.

As I mentioned during Snark Week about a similar, but less elaborate picture, this hairstyle was common during the 1590s. By when, Mary would have been dead (also, there’s still the stupid earrings, plus the rest of the jewelry looks totally modern). 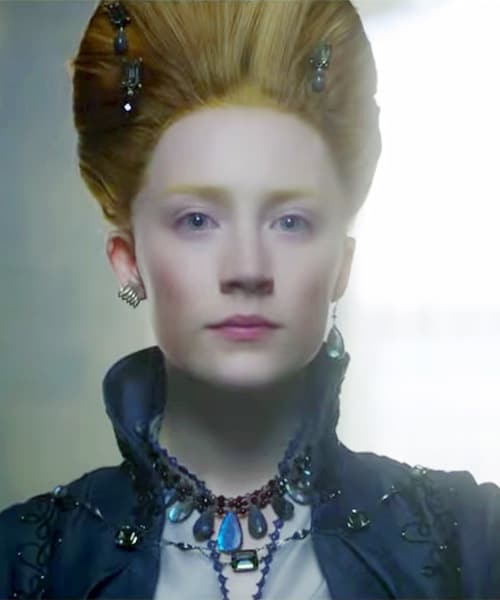 In case anyone’s wondering, here’s what Mary would have looked like during her reign in Scotland: 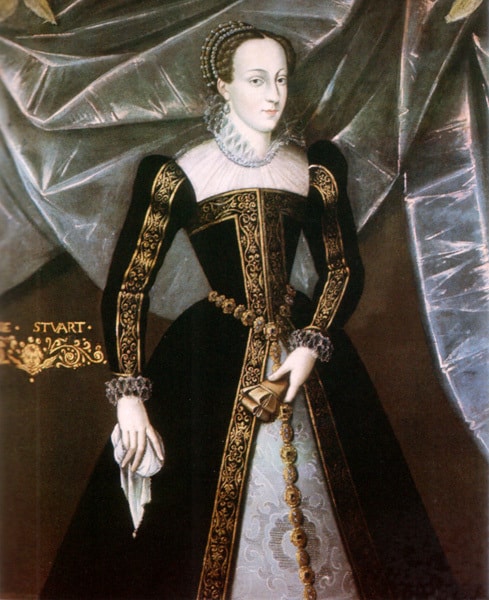 On the subject of hair, Elizabeth doesn’t always get the best looks either. 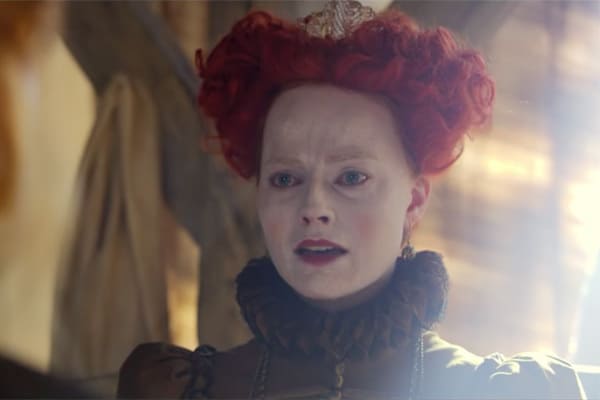 C’mon, this is the costume party shop cheezoid version of Queen Elizabeth’s wig you can buy online for $29.99. It’s cartoony and cliche. Some people are saying this flick is Oscar-bait, but GAG, I beg to differ. 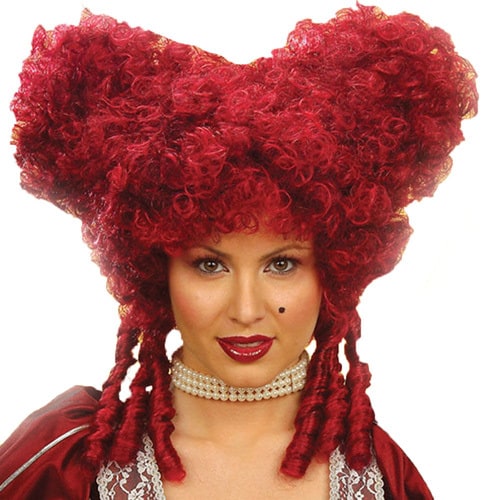 WTF is this hat supposed to be?

Elizabethan hats are another one of my things, I’m a big fan of them (they go with the hair, y’know). I’ve looked at a jillion period images. And I’ve yet to see something like this: 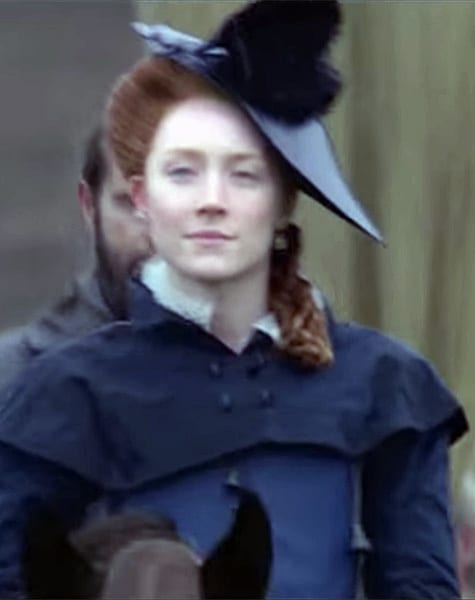 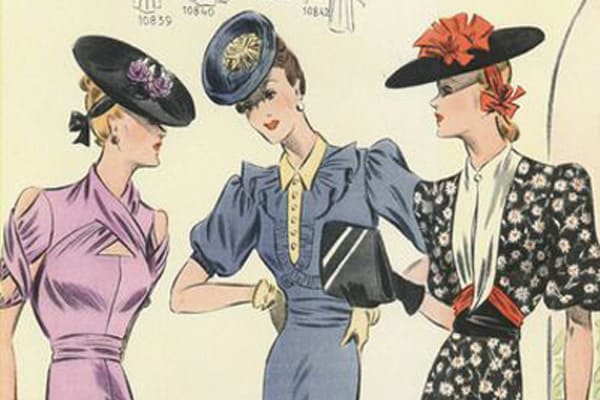 Not a hat actually worn in the period this film is supposedly set. 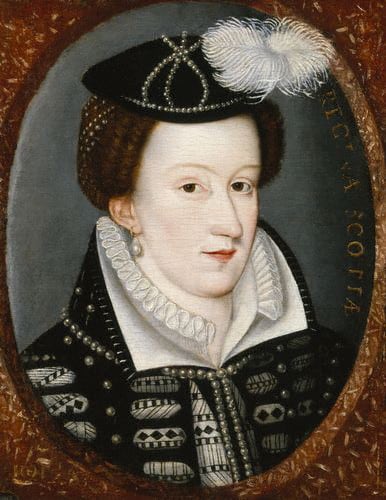 You couldn’t get the right portrait for Mary Queen of Scots?

First, it’s a Snark Week cliche to have poorly rendered historical portraits in movies. Happens all the time, and annoys the fuck out of us. But I had to stare at this image a while to figure out why it bothered me so much. Then it dawned on me. It’s Elizabeth looking at a portrait of Mary, but it looks more like a bad portrait of QEI, than any image of MQoS! 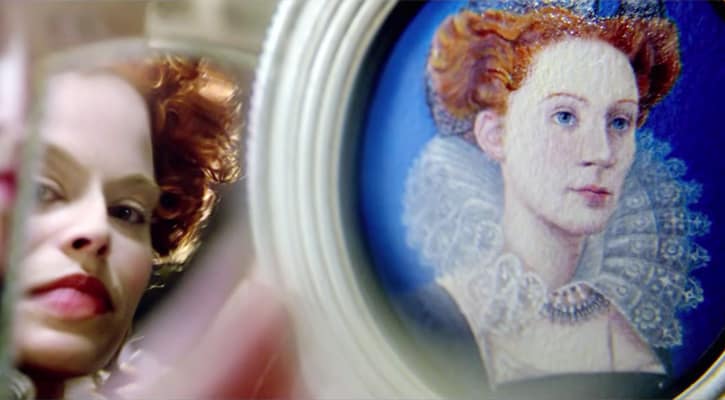 Talk about confusing. Compare with actual historical portraits, like these: 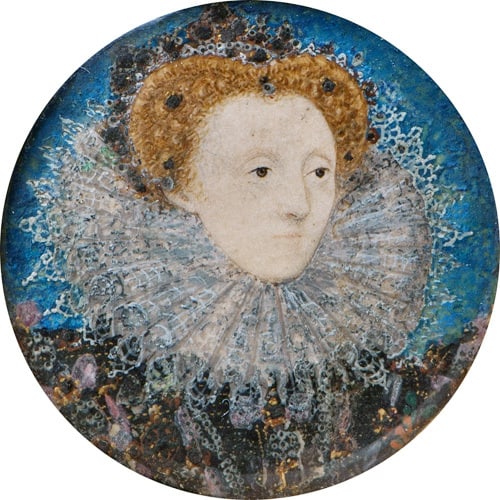 Miniature of Queen Elizabeth I by Nicholas Hilliard, circa 1586-1587

And here’s a portrait of Mary Queen of Scots that she sent to Elizabeth (it’s currently in the Royal Collection at Holyrood House; a larger copy is at the V&A Museum). 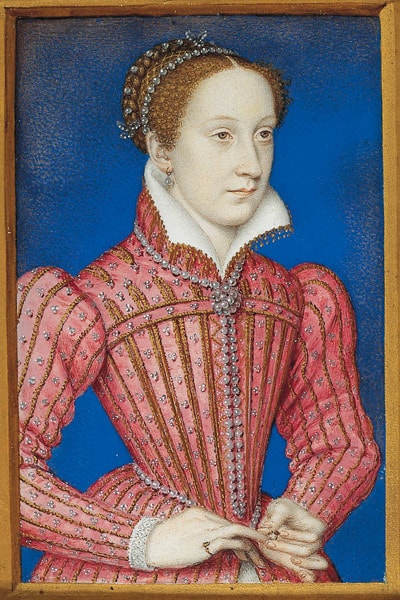 1558 miniature of Mary Queen of Scots by Francois Clouet

Seriously, people, this stuff is known, there’s evidence. It’s not that hard to figure out. Most of this shit is even online these days, FFS.

1) Casting David Tennant as that bugger John Knox? That’s just mean.  Sure, Tennant has an adorable and authentic Scottish accent, but Knox is a misogynistic blowhard who preached “The First Blast of the Trumpet Against the Monstrous Regiment of Women.” So fuck him.

2) I fully agree with Vulture who pointed out that the promo poster’s taglines are backwards. They read: “Born to fight” for Mary, and “Born to power” for Elizabeth. But Mary was queen at 6 days old when her father, King James V, died, so she really was born to power. Elizabeth was declared a bastard before she was 3 years old, and she had to fight for her place at court and her place in the succession until she became queen at 25. Swap those taglines, and it makes a lot more sense historically, even if that doesn’t play into the movie’s sympathies.

3) And there’s the grommets and that fucking ponytail. But at least it’s red hair, right? No. Not impressed. 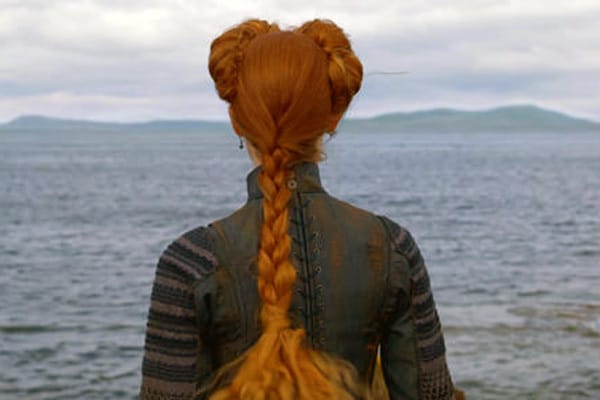 If you’re going to Costume College this year, come to my class titled Mary Queen of Scots’ Wardrobe Unlock’d where I’ll discuss what the real queen actually wore, not the BS that movies like this invent!