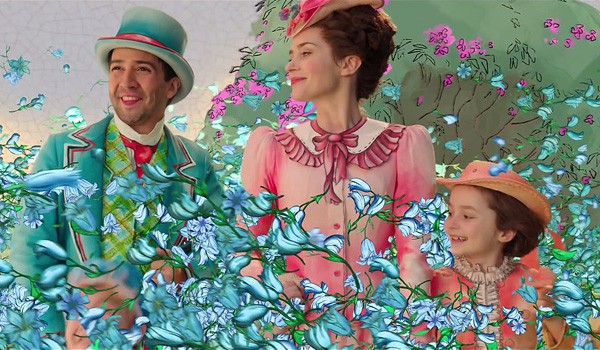 I’m on record as a huge fan of the original, so there was a lot to live up to. In that respect, Mary Poppins Returns (2018) is rather weak. On its own, this is probably a fine movie if you’re coming to it with no preconceived notions or expectations. But then, you’d have to be, IDK, age six and having not seen the original, so you’re not reading this blog. ANYWAY.

What it does get right is the costumes and the animation (old-school, not obviously CGI). The story is predictable and ho-hum, and as a musical, the film falls short on the songs, since none are especially memorable in the way that the original are. The cast is fine, of course — Lin-Manuel Miranda is an absolute delight as the lamplighter sidekick, and Emily Blunt is perfectly decent as Poppins herself. Her singing range is more limited than Julie Andrews and it shows. In fact, if this wasn’t a musical, Blunt would be fantastic because she’s a more of the snarky-sharp nanny character like Travers wrote in the books than Andrews’ spoonful of sugar.

The kids are almost interesting in that they aren’t always standard-issue cute moppets. They have some unique agency going on. But the story is set off by a standard-issue Disney cliche of the widowed father, Micheal Banks, who has to deal with their house being foreclosed. So nothing new. Blah blah blah. However the costumes by the always excellent Sandy Powell give life to the story even when it sags, so let’s just focus on that, shall we? Let’s.

Powell did a metric fuckton of press around the time Mary Poppins Returns came out in the theaters, and she explained everything even remotely interesting about her work on the movie. And for what’s essentially just a family film set in 1930s London, there really are a lot of beautiful costume details.

For the pivotal title character, Sandy Powell knew she had some constraints to work within — but she also wasn’t going to do the same things as Mary Poppins wore in the original film:

“Her silhouette is ingrained on everyone’s memory, isn’t it? We know it. It’s an iconic image and I knew I had to reference that, but didn’t want it the same. We didn’t want to put Mary Poppins in 1934 in something that would have been worn in 1910.”

“I designed a 1930s version of the belle-tiered, elegant longline coat, with the edition of a double-cape at shoulders. Just to make it more modern and fashionable for the 1930s and also to create a bit of movement.” — “The Mary Poppins Returns Costumes Are Just as Magical as the Movie,” Fashionista 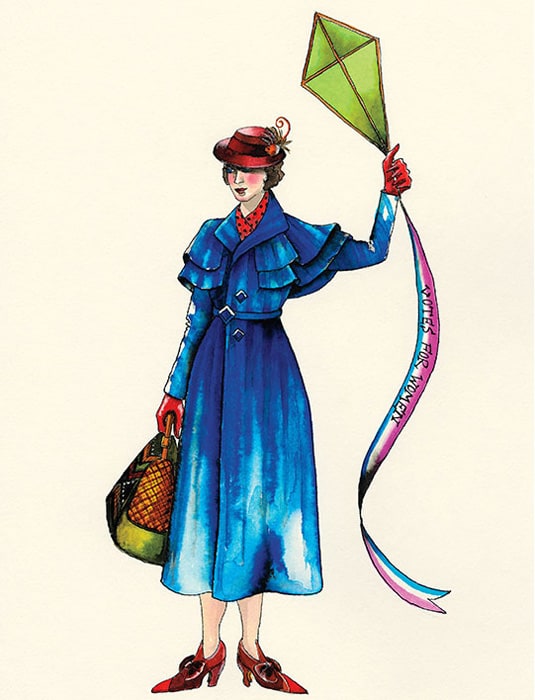 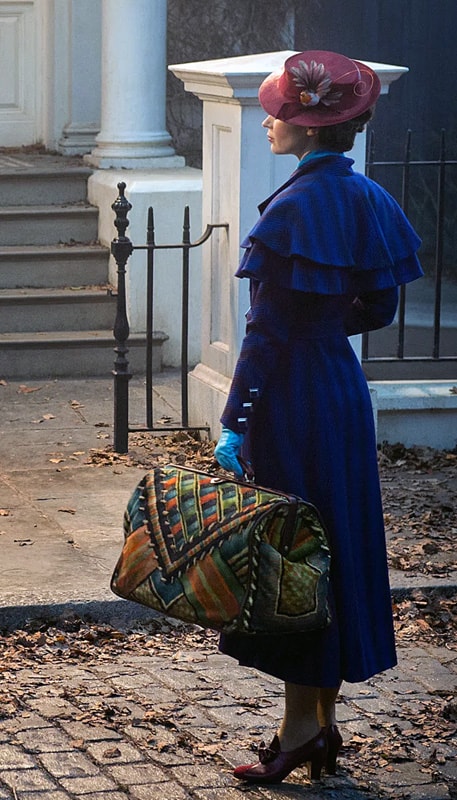 Of course, Powell knows her stuff and goes straight to the historical sources:

“The first thing I did when I met [Emily Blunt] was try on a bunch of different 1930s skirts, dresses, blouses, coats, hats, just as a starting point just to see what would work on Emily, on Emily’s shape and sort of quite often you hit on something in that first fitting that sort of dictates what the style is going to be, what the look’s going to be.” — “How Mary Poppins Returns Recreates and Reinvents Familiar Costumes and Sets,” /Film 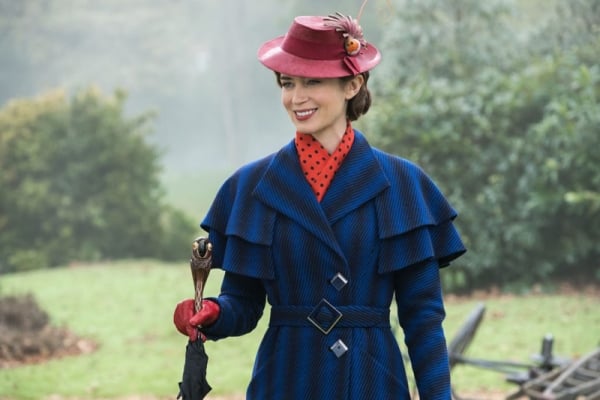 “For Emily Blunt’s Mary Poppins costumes, I really did reference 1930s fashions directly. I had very elegant images from Vogue and Harper’s. She really is wearing quite up-to-date fashion, although conservative, because she’s a nanny. Really the line and silhouette are taken from the fashion of the period.” — “Costume Designer Sandy Powell’s Magic Touch on Mary Poppins Returns,” The Credits: Profiles Below the Line

At first glance, Mary is wearing a simple (if chic) suit, but look closer and you’ll see SO MUCH pattern, texture, and print in Poppins’ and every character’s clothing. It’s an amazing touch that makes the costumes utterly delightful. Powell explains that this has both a historical inspiration and is meant to be appealing to the film’s audience:

“The 1930s were just a bit on from the Art Deco period of the ‘20s, where there’s a lot of geometrics. So, I actually felt Mary Poppins’s character was quite graphic and straightforward. I liked the idea of using chevrons and stripes and polka dots, all of which are completely fine for the 1930s. I just avoided using florals; I didn’t think that felt right for the film, or for her character. But I also liked the idea of a graphic representation of characters because I’m bearing in mind the whole time that this film has to appeal to kids, to small children who really respond to color, and pattern, and simplicity in graphic qualities.” — “Sandy Powell Balances History & Stylization With Costumes for The Favourite and Mary Poppins Returns,” Deadline 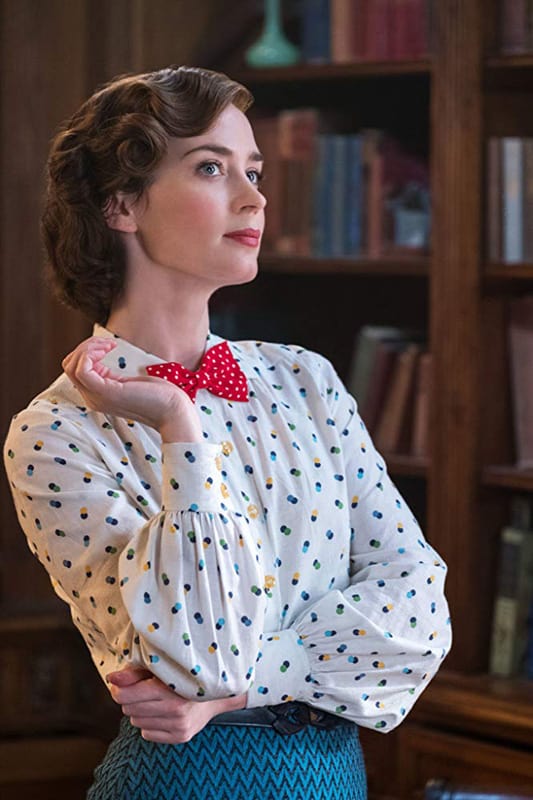 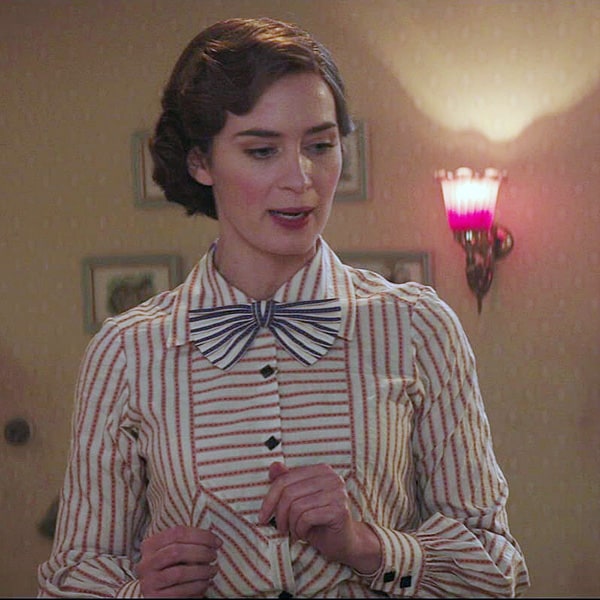 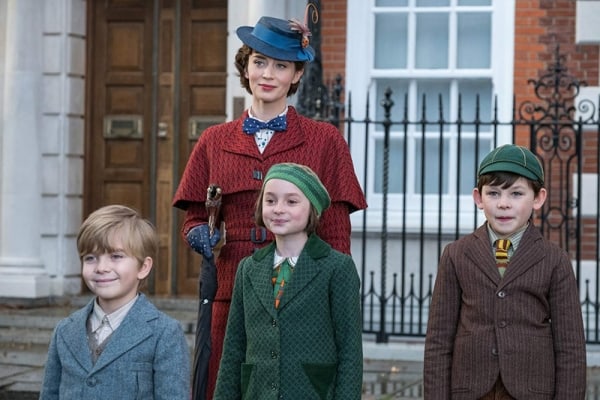 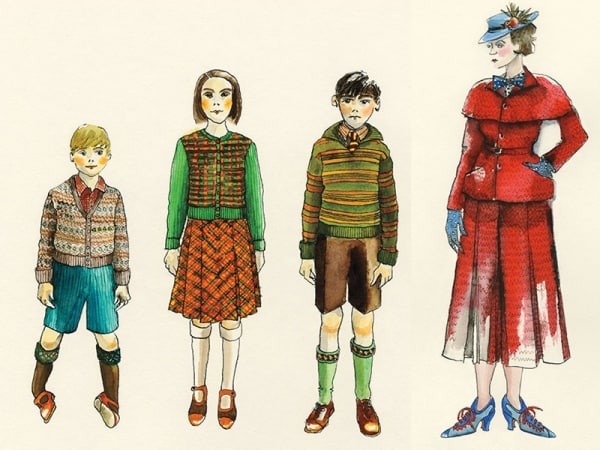 Of course, there are specific details that do hark back to the first film, if obliquely. Sandy Powell wasn’t going to be too obvious, she says:

“I think the robin on Mary’s hat is really my favorite. Although the robin references and is an homage to the original, it is different, and it is a 1930s version. I didn’t want to do flowers, that didn’t seem appropriate for this Mary Poppins. She’s a lot more elegant and chic. It had to have some kind of decoration, and I wondered what other kinds are there? There are ribbons and bows, which aren’t her, or birds. I thought, “what kind of birds?” I immediately thought of the robin from ‘A Spoonful of Sugar’ in the original. So that was my ode to it, a little, embroidered robin. I had somebody employed just making robins from different materials. In the end, it was totally embroidered. The wings are just made out of embroidery thread, as are the feathers. They’re gorgeous.” — The Credits: Profiles Below the Line 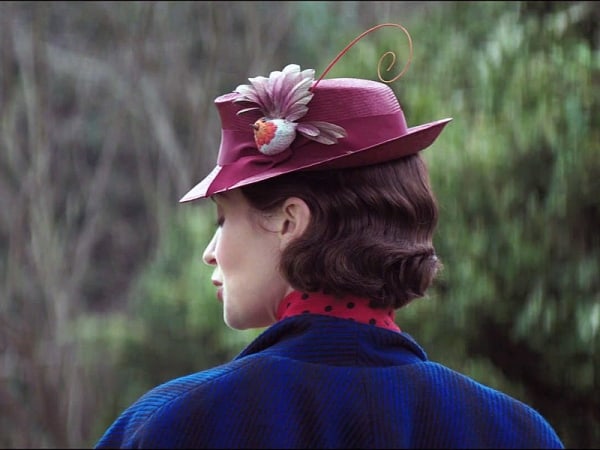 “I think the thing I found really exciting about the arrival costume is that it’s sort of representative of really who she is and how I wanted to play her. That amazing duality of the character that I found when I read the books, that she has this rather sort of imperious, put-together, very vain exterior and yet on the inside, there’s a sort of wildness and eccentricity. And so the lining of the coat was this fabulous bright, orange, polka-dot lining and that is so the character.” — “How Ginger Rogers Inspired the Mary Poppins Returns Costumes,” Variety 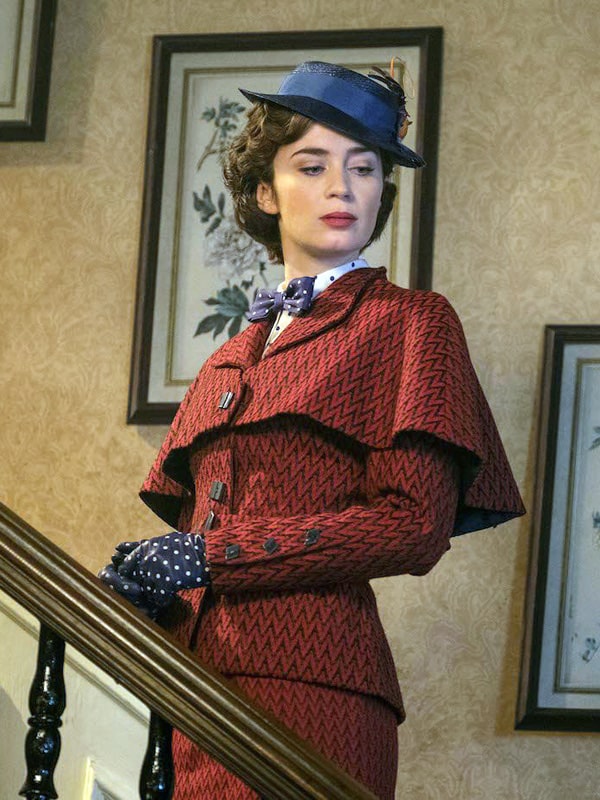 Costumes in the Bath Scene of Mary Poppins Returns

The first fantasy sequence in the movie occurs when the nanny gives the three Banks children a bath. Sandy Powell describes her process:

“It says in the script it’s 1930, they dive in, and they’re wearing swimwear, and they’re wearing 1930s swimwear. At that point I did actually go to [the director] and say, “I don’t think it’s going to be right for Mary Poppins to be in a 1930s swimwear, because it’s not a million miles away from [swimwear today]. There’ll be a lot of leg, [but] you’ve only just met Mary Poppins. Do you think she should be showing her legs off in a swimsuit for the first number [in the movie]?”

[The director] said, “Oh no, that’s a bit weird. Let’s do different swimwear. Let’s do Victorian swimwear,” which is why it is that, why we did that period, really; just because we thought Mary Poppins shouldn’t be showing her legs off quite so soon in the film.” — “Mary Poppins Returns Costume Designer Talks Dressing the Cast in Bathing Suits and Pants,” Forbes 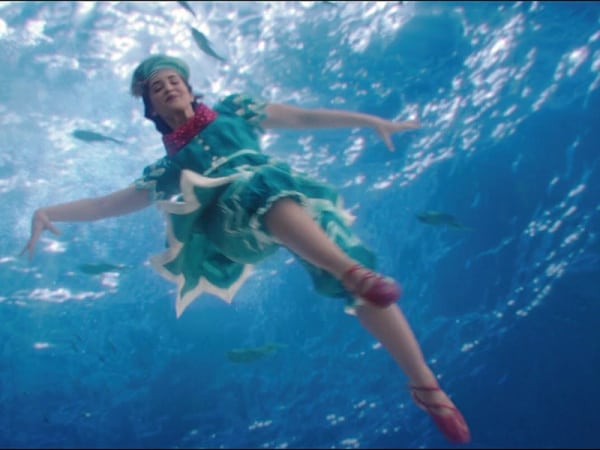 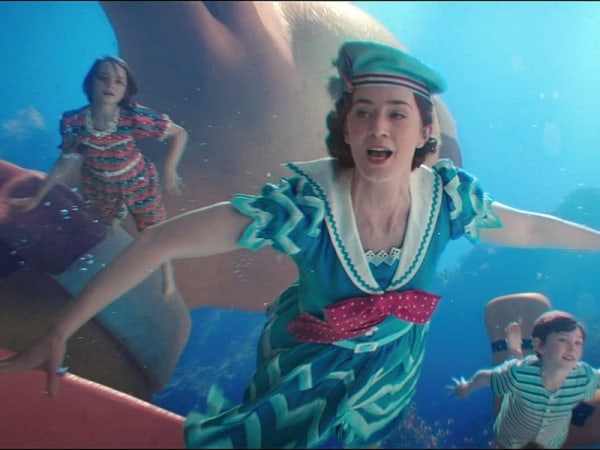 For Mary’s costume, it referenced what she had already been seen in, but was appropriate to the underwater scene, Powell explains:

“Mary Poppins is wearing blue, a much brighter blue than she would have worn normally in real life, and with the exaggerated chevrons; her hat has a flying fish on it, instead of a bird, on her daytime hat.” — Fashionista 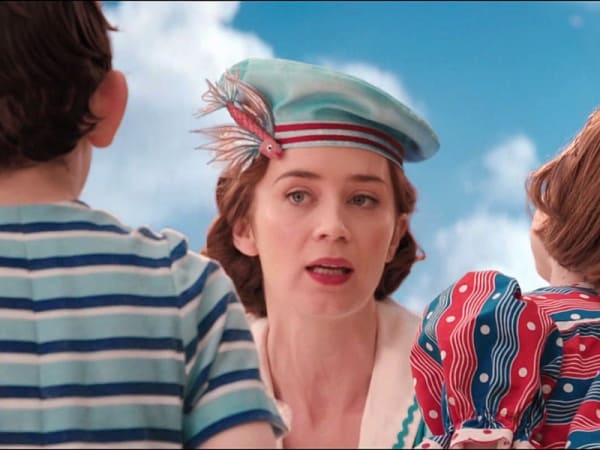 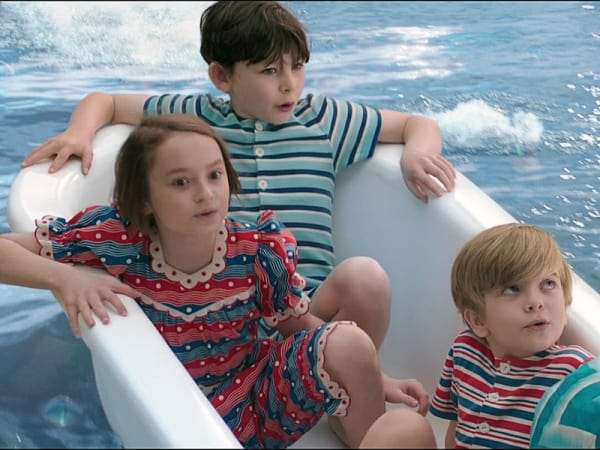 Costumes in the Royal Doulton Scene of Mary Poppins Returns

The biggest animated sequence occurs when Mary Poppins takes the kids and the lamplighter Jack into the Victorian-esque world of the Royal Doulton china bowl. It’s a really gorgeous piece and worth watching just for the mix of costume and animation! Powell’s costumes are crucial to the effect:

“It was one of the first things I thought about when I talked to Rob Marshall about the project, was how to bring a nostalgic style to the scene in an old-fashioned, hand-drawn way. We had to get ahead designing the costumes for the animated sequence so the animators could start building animation around them. It was exciting and risky, and I love the fantasy effect.” — “Mary Poppins Returns Costume Designer Created 448 Original Looks for the Characters,” Hollywood Reporter 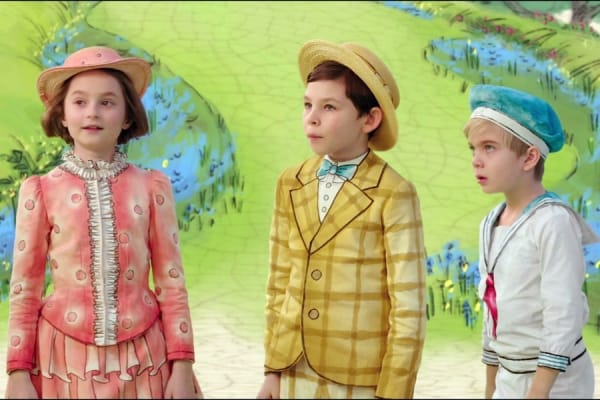 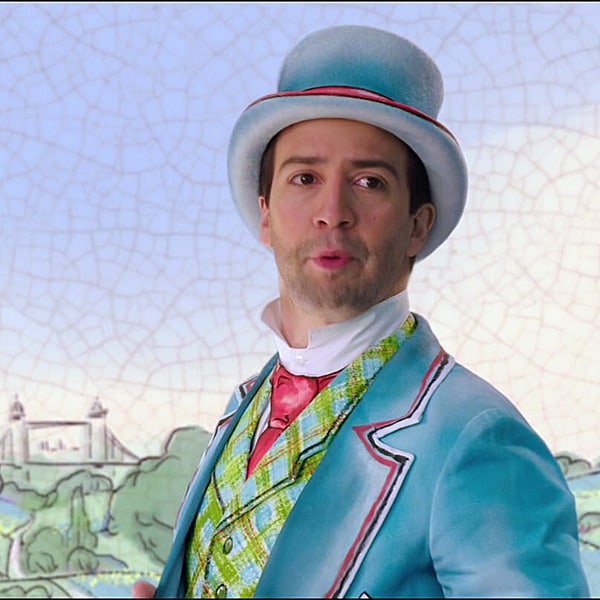 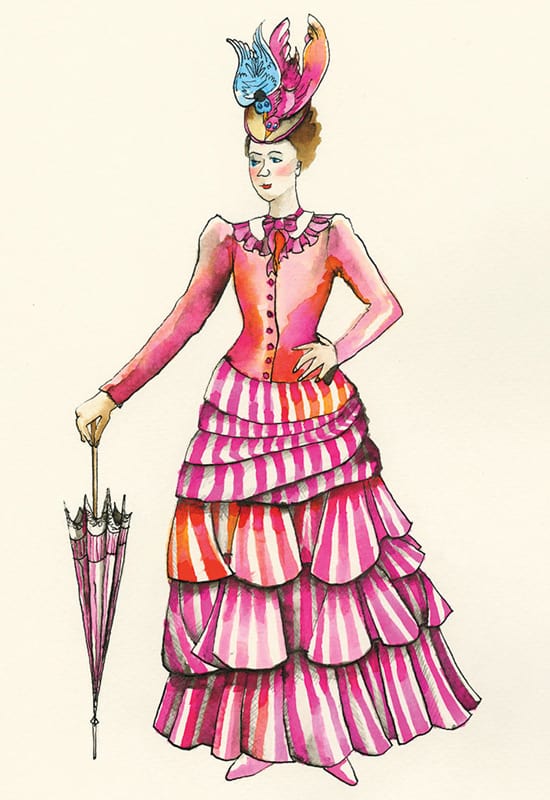 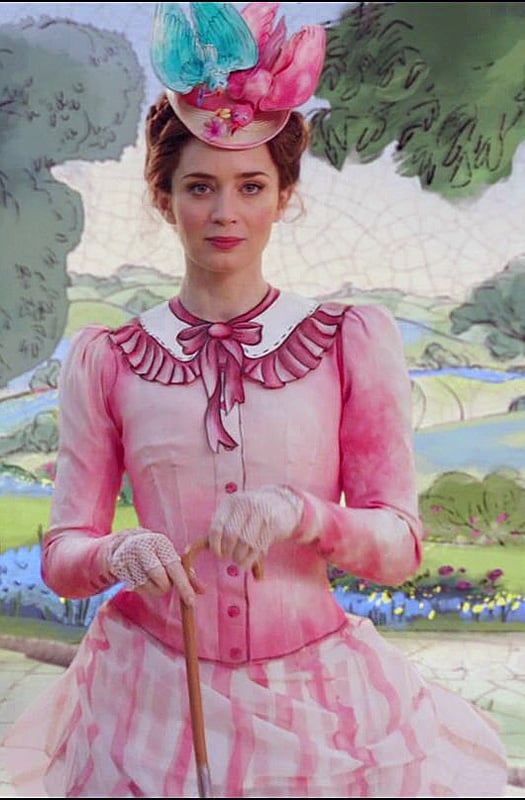 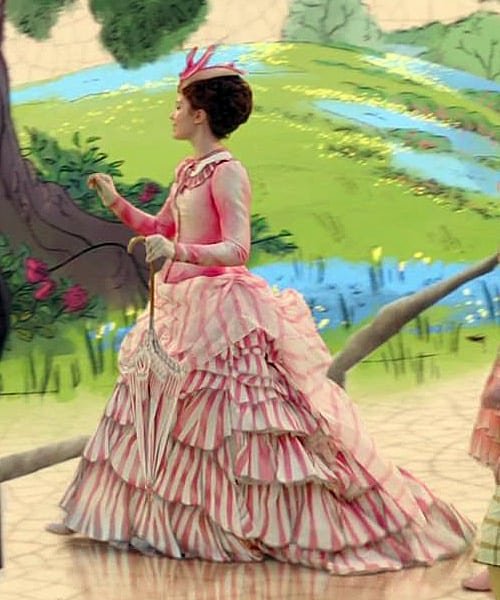 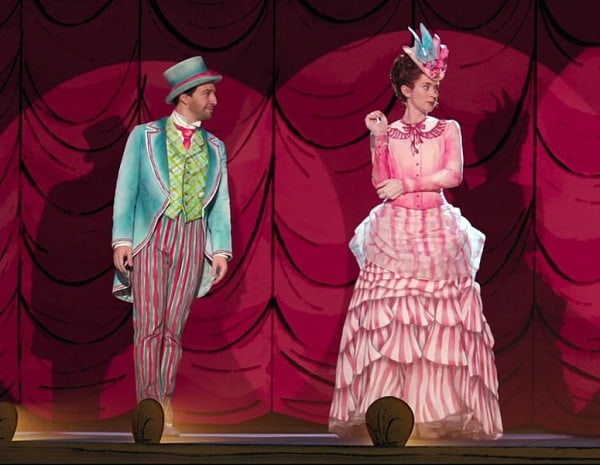 The painted costumes were Sandy Powell’s idea and she presented this to the animation team — before they’d really designed the full animation sequence. She provided 19th-century image references to the animators for the animal’s outfits as well, and the animators sent her sketches of the animals for costume input.

The costumes for the animated scenes were made out of cotton fabrics and then painted or dyed to achieve the right effect. This was coordinated with the animation team to match the same tone and depth of colors in a painstaking process.

“There was several weeks of trying things out. Number one, trying out different fabric, seeing how paint reacted onto different fabrics, behaved on different fabrics, because we needed a base cloth, like a white or a cream base cloth sort of rather like a canvas. And we actually ended up using lots of cottons and canvas and stuff like that for the costumes because the paint worked very well on it.” — Forbes 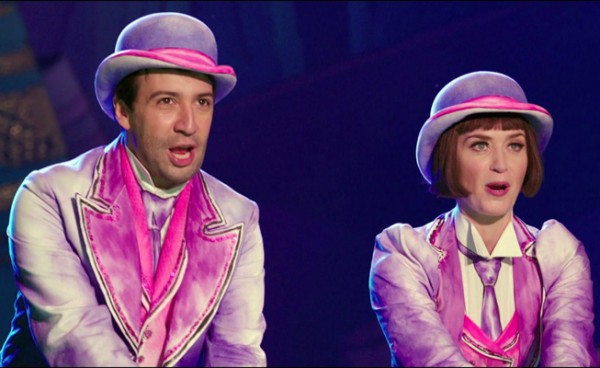 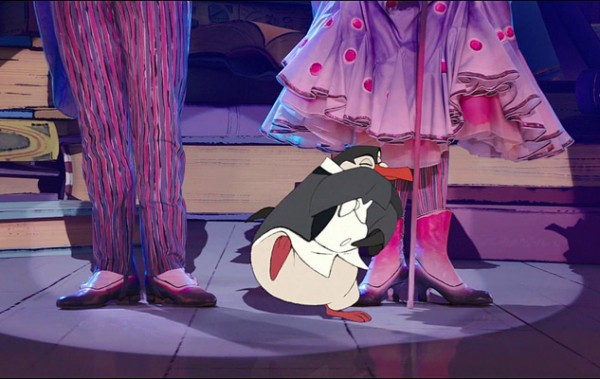 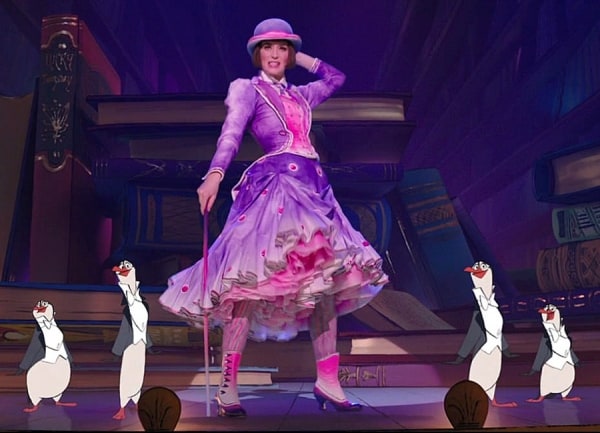 Other Costumes in Mary Poppins Returns

While the nanny is, of course, the costuming tentpole, each of the lead characters has thoughtful costume design as well. Jane Banks is a grown woman since the first film, and as the daughter of a suffragette, she’s now a labor union activist.

“I wanted her to be an emancipated woman, and, of course, the really iconic way of doing that is to put her in trousers, so she could be active,” explains Powell. “She’s always running somewhere, rushing around, and she couldn’t be doing that in a skirt and heels. I wanted her to be free to move and be strong.” — Fashionista 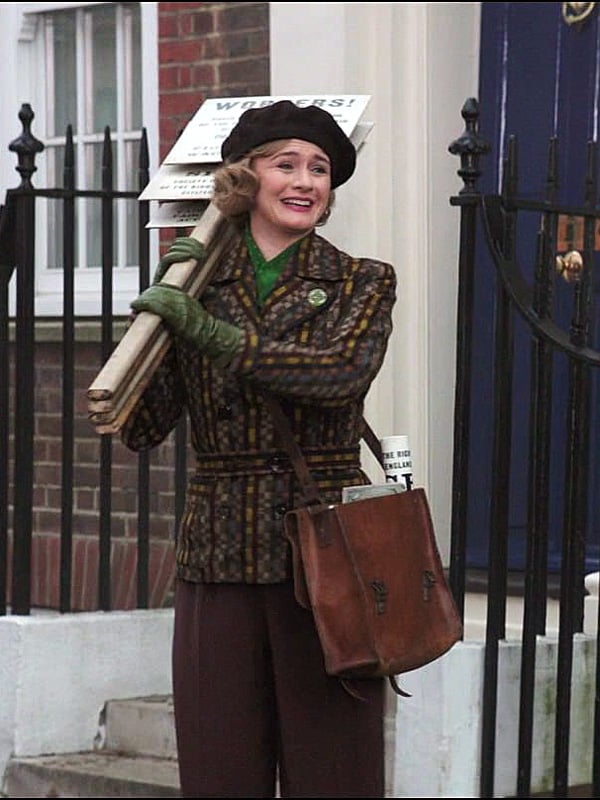 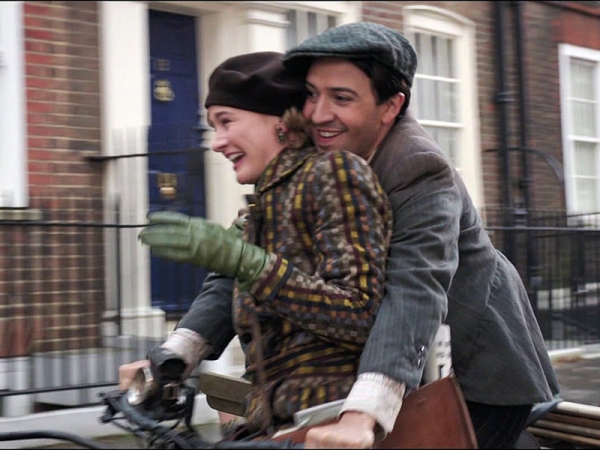 While Lin-Manuel Miranda’s Jack stands out the most, his “leery” lamplighter pals aren’t merely the chorus. Sandy Powell tried to give them some personality too.

“The idea was to give them all the same feel, the same look but create individuals within them, amongst them. Rob didn’t want a chorus line. Like in the first one, the chimney sweeps were great but the dance piece in that, they did all look the same in the original. And he did want individual characters. And they are all injected with little bits of color. En masse and at night they do look quite dark and the silhouettes are gray but when you see them closer or in daylight you see little bits of color.” — /Film 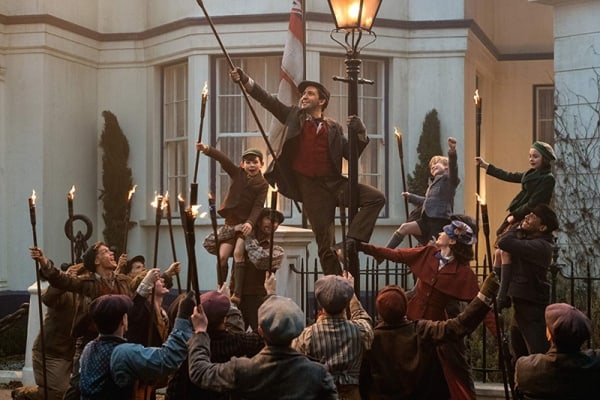 Oh and Meryl Streep plays Topsy, a cousin of Mary Poppins, who’s a mix of several characters in the books. I found this scene pretty annoying and pointless TBH. Streep was vamping it up like crazy, and I just didn’t care. Her costume is wacky with 1920s references, but also kind of gimmicky with all the “artist” references.

“I really wanted Topsy to have a turban and not see her hair — just have the turban and big jewelry,” says Powell. “And then Meryl came into the room and said she would like a bit of hair. ‘But I want it that color,’ she said, and pointed at my hair,” laughs Powell, about the origins of Topsy’s bright-red tousled bob.” — Fashionista 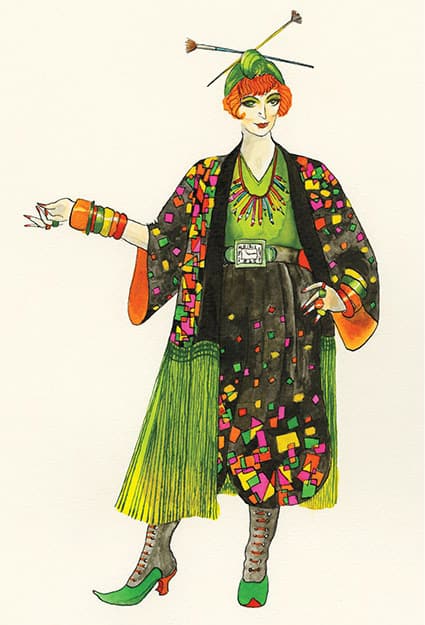 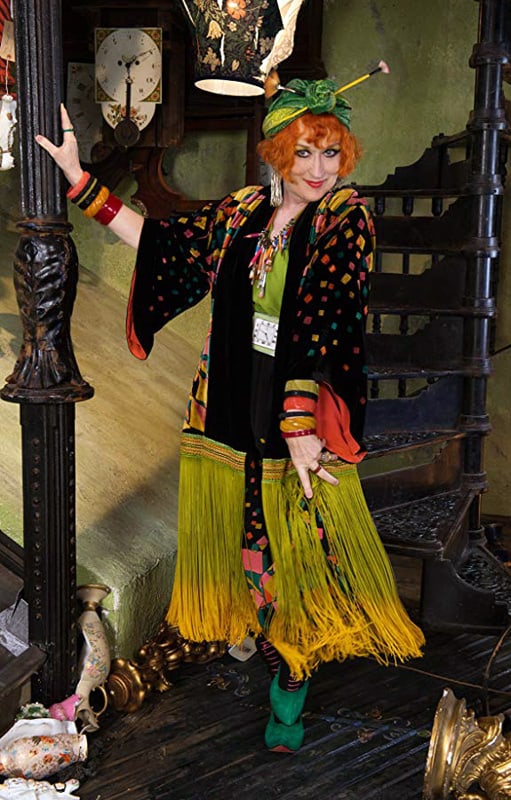 What do you think about Mary Poppins Returns?