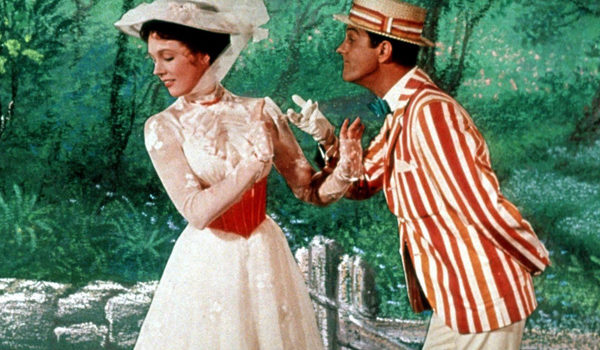 One of the earliest posts I wrote her was a breezy little Throwback Thursday on Mary Poppins (1964) on the occasion of the film’s 50th anniversary. The blog bit was never meant to be much, since the film isn’t terribly historical nor are the costumes that spectacular, it’s just a bit of Disney fluff and fun. And yet, it lives on in search, especially for people curious about Mary’s “jolly holiday” outfit, which is a fanciful riff on Edwardian whites. So why not take a closer look?

The film is supposed to be set in 1910, although the clothing often looks a bit old-fashioned for that date — more 1900 and sometimes even 1890s in the women’s styles. The choice of “1910” was specifically made to deviate from the 1930s setting of the original P.L. Travers books, upon which the Mary Poppins story is based, because Walt Disney didn’t have rights to the book’s illustrations. Even if they didn’t hit the mark, at least they weren’t infringing, so yay! Costume designer Tony Walton said of his work for Mary Poppins:

I love the turn-of-the-century look and had on many occasions worked on things by Shaw or Oscar Wilde. I wish I had been born into that period. I loved to design for it so that was a godsend to me. My most fortunate notion was giving Mary Poppins a secret life. I showed this by making her clothes gray or black or slate but showing she had a secret life by their linings, which were always flashes of crimson or some very bright color.

Btw, Walton was also Julie Andrews’ husband at the time, and the pair had just had a daughter before filming began. Connections are everything in Hollywood, but it also helps to have an excellent portfolio. Take a look at these drawings… 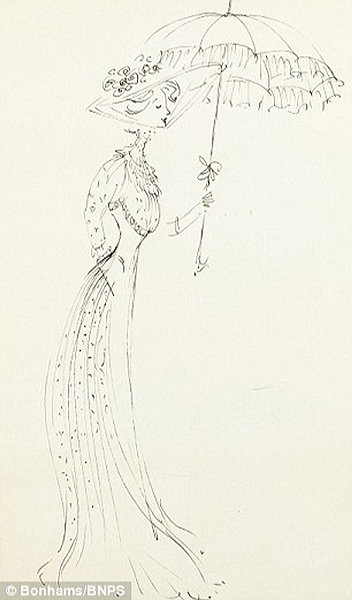 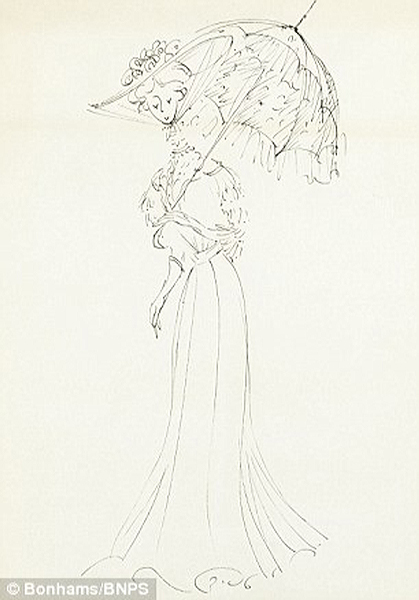 There’s a bit of a ‘Gibson Girl’ look to these initial sketches. 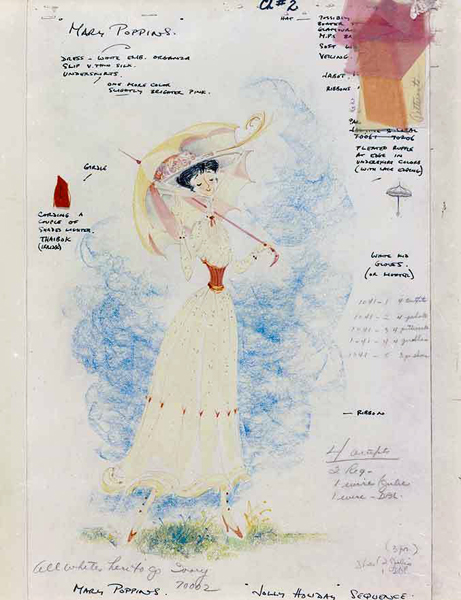 This detailed drawing includes fabric swatches, showing mix of red, orange, and yellow that would be used in Bert’s jacket, to coordinate. The same red is used on Mary’s corselet and the ribbons on her dress.

The resulting ‘Jolly Holiday’ outfit itself consists of a white lace dress, trimmed in red ribbons, worn with a red corselet or swiss waist (essentially a wide, corset-like belt), and accessorized with matching hat, gloves, and parasol. Her dress is ankle-length, revealing buttoned boots also accented with red. 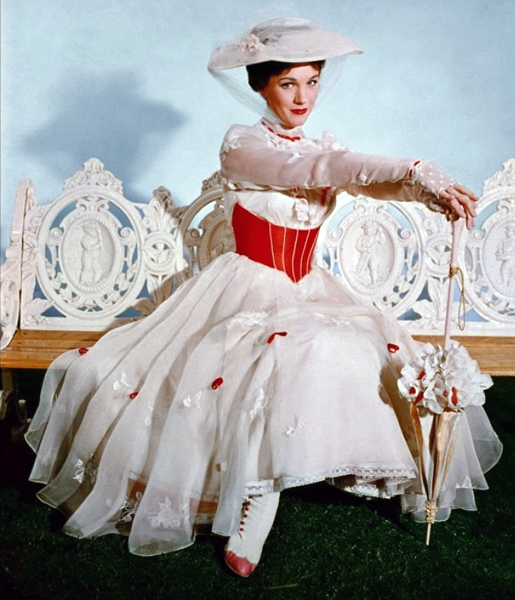 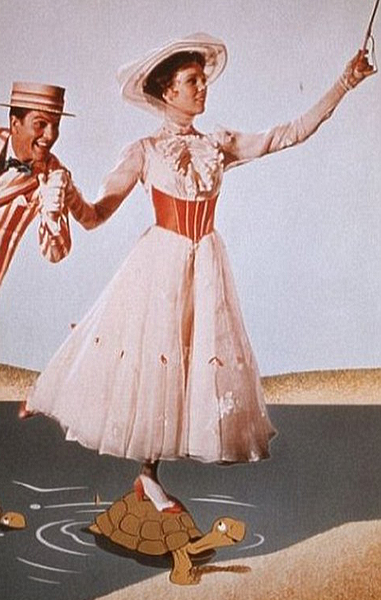 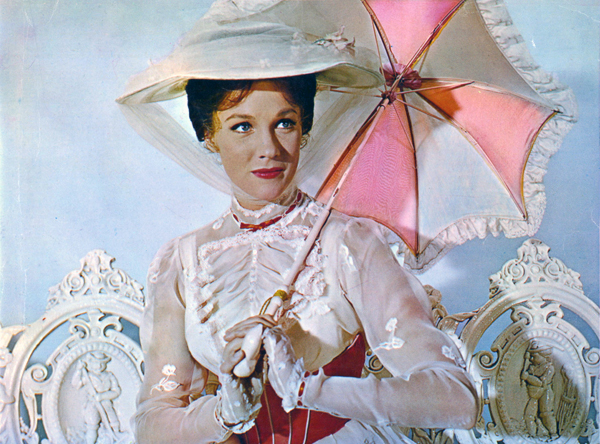 Many photos have been taken of the outfit on display. Everything white has faded to yellow over the 50+ years, the reds have faded to orange, and the pinks have faded to beige. The corselet / swiss waist has gone missing entirely, along with the white parrothead that topped the parasol. 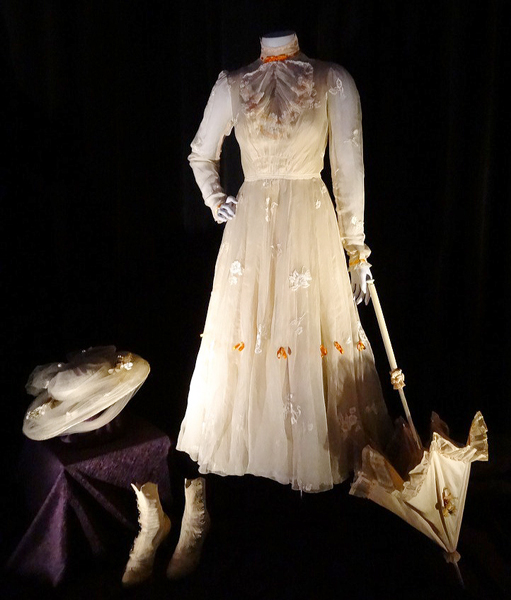 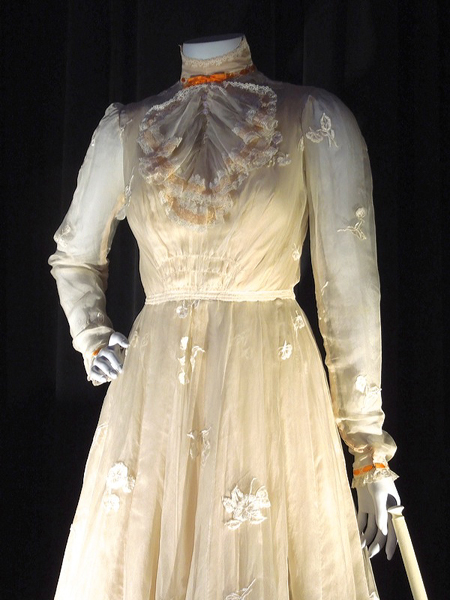 Closeup of the gown’s bodice. 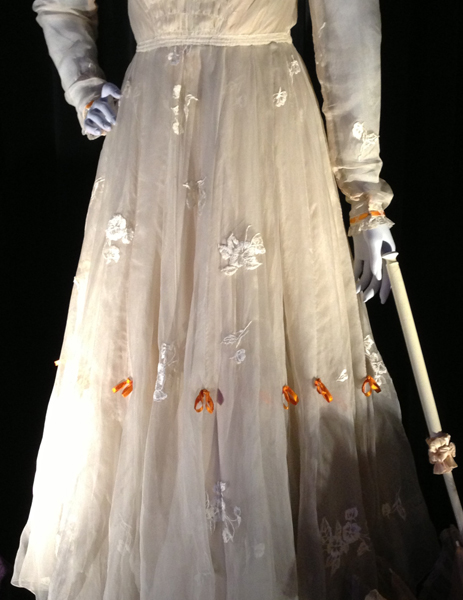 The ribbons on the skirt are now orange. 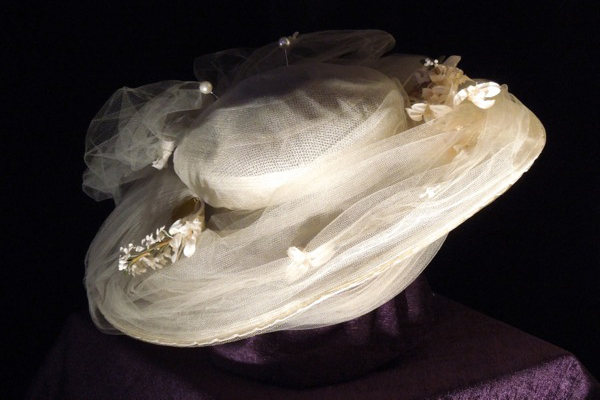 The hat might be missing some flowers, but all the veiling is intact, and you can see the wired construction. 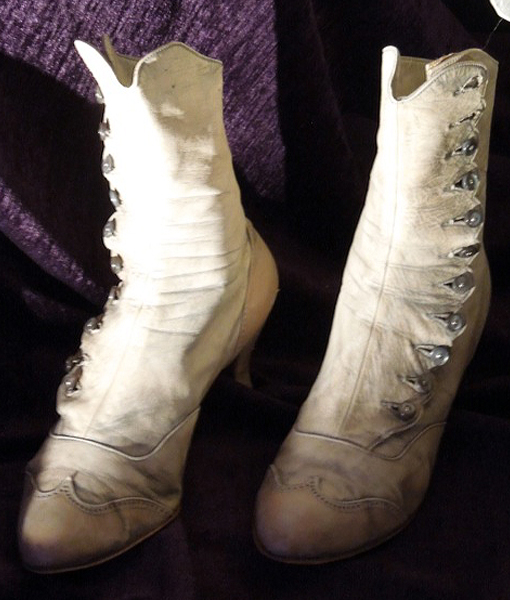 Even though the boots’ color accents are gone, you can see that they were proper buttoned boots. No zips or elastic! 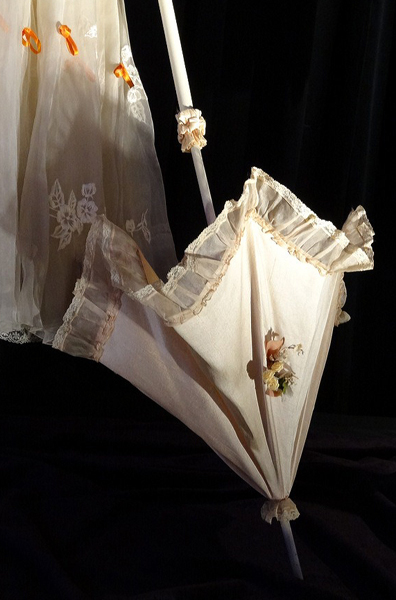 The parasol is faded but still has its trimmings.

Now, how historical is this outfit? It definitely draws on the popularity of Edwardian white dresses, which were worn in summer and hot weather by anyone who could afford it, from the middling classes to the upper crust. Edwardian whites were also popular in portraiture, and artists from Vincent Van Gogh to John Singer Sargent painted women in white afternoon gowns, especially strolling outdoors. Here are a few that evoke a similar feeling as that of Mary’s ‘Jolly Holiday’ outfit. 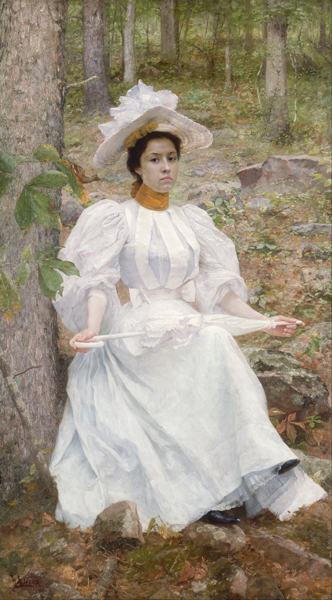 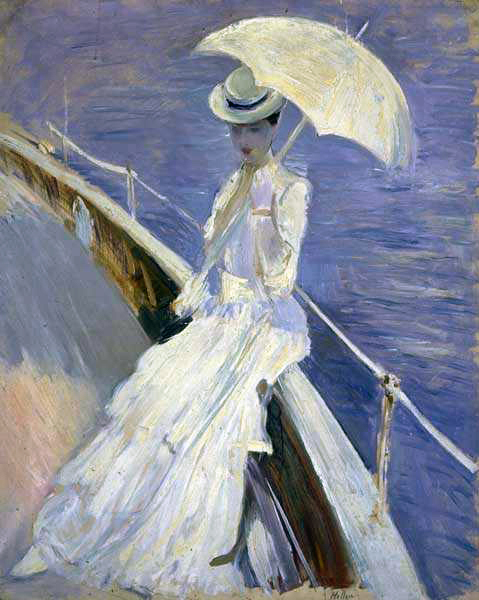 Young women in white by Paul Helleu, 1900. Even has a pointed belt, similar to Mary’s corselet. 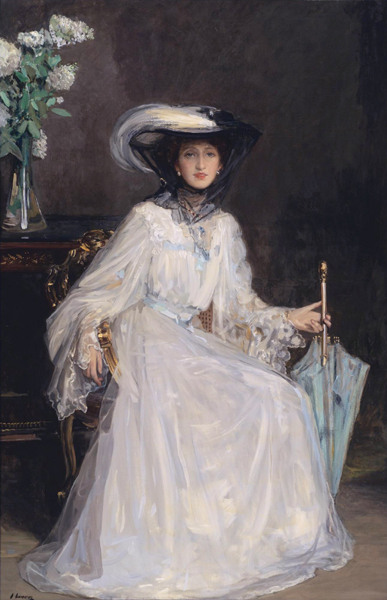 But what Mary’s outfit most resembles is this gown worn by Princess Mathilde of Bavaria, who died of tuberculosis in 1906. 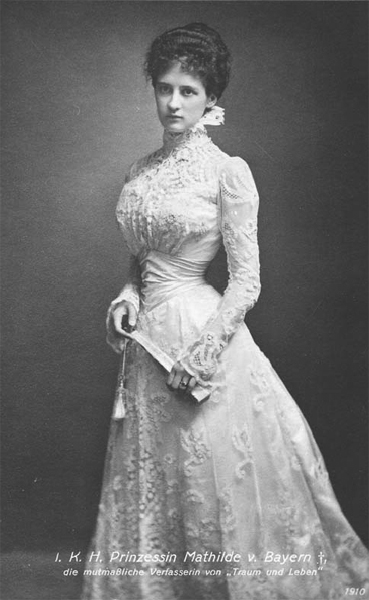 The bodice and sleeves are a striking inspiration for the Jolly Holiday gown, down to the pattern of lace (obviously simplified for the movie). The corselet is a pale color here, but again, the inspiration is clear. 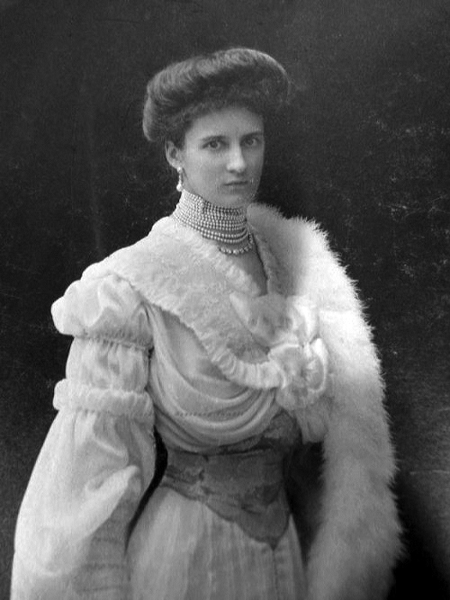 Princess Mathilde seemed to like these wide corselets / swiss waists, and she’s wearing a darker colored one in another photo, taken in 1905.

The historical inspirations are evident. Even the corselet / swiss waist being a dramatically different color, well, here’s an extant example. 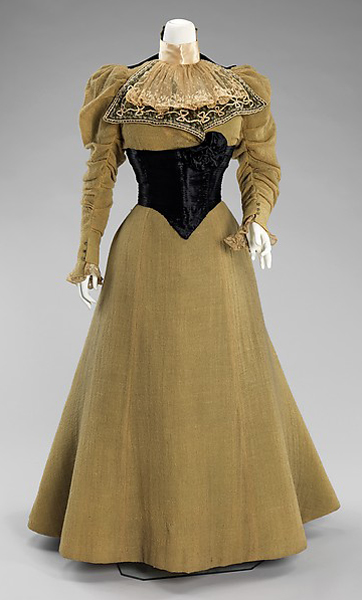 1896, wool gown with black satin waist, at the Metropolitan Museum of Art.

However, Walton reminds us that this scene is meant to be a fantasy, not strictly historical:

The design for Mary in the ‘Jolly Holiday’ sequence was my first attempt to come up with a deliciously ‘ice-creamy’ quality that would convey a feeling of the unexpectedly welcome treats being enjoyed by the children, and even Bert and Mary, during this holiday adventure she was creating for them all.”

This frothy outfit is a visual treat, with a pleasant nod to Edwardian fashion too. Do you agree?