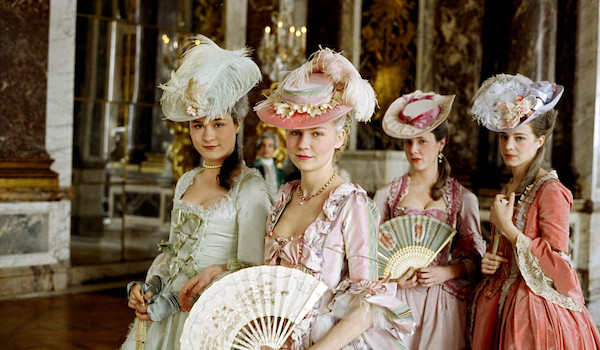 Wow wow wow. I haven’t seen a more perfect movie in YEARS. I really just had an emotional reaction to it — I’m pretty much in awe.

I’ve heard Coppola and Dunst speak of it as an “emotional portrait,” and I think that’s really apt and the movie really succeeds on this level. I’m sure it helps that I’ve read bios of MA and studied the history of 18th c. Europe, so I was able to fill in the blanks around the film. I’m not sure you’d need that background to appreciate the film, but I think it’s useful to really get why the French Revolution happened and why MA ended up as she did, as the film doesn’t go into this.

What I liked the most was the tone and emotional feel. On the one hand, it was a gorgeous, languid portrayal of MA’s life. I really got a feel for what it would have felt like to live in Versailles, and/or as an 18th century aristocrat. The sense of luxury, frivolity, and beauty filled every scene. At the same time, it really brought home what it might have felt like to live with such protocol (the lever [the public dressing], being watched as you ate, etc.). While I’m sure not every detail was perfect, and I’m sure there were elements omitted or changed, it really brought home the feeling of that world to me.

The focus of the movie on Versailles helped me to understand something I hadn’t really gotten before. Although MA was frivolous, she really did fulfill the role she was presented — she eventually made her marriage successful, she artfully negotiated Versailles (her world, as opposed to the larger world of France), and she became a queen. Unfortunately for her, she did so at a time that the larger world was changing, trends that had begun in the 1740s or 50s with the early elements of the Enlightenment; and she did so at a time when Louis XV and XVI were not being the best financial managers for France. I recently read a biography of Mme de Pompadour that talked about the tradition in France of reviling the King’s mistress, who was thought of as an evil influence, too decadent, etc. Louis XVI was the first king in forever to not have a mistress; as such, the public hatred and scapegoating that was usually placed on the royal mistress went to the Queen (who was usually a background figure in earlier reigns). Add all that with a bread famine, and you’ve got MA in the wrong place at the wrong time.

However, the film didn’t (to me — not sure how the average American would take it) present MA as “just a girl,” as many of us feared. I do think it showed her as being trained and conscious of her role in society and politics. Except for a few bits of dialogue around court ceremony (which were understandable given she came from a slightly less formal court), she wasn’t presented as chafing at her role. It did do a good job illustrating her changing termperment as she aged and had children and became interested in living a more “natural” (in the 18th c. Enlightenment idea of the term) life, but not as some “she’s just a girl like you or me!”

Of course, there were certain elements that weren’t 100% accurate — whether or not she was interested in politics, MA was much more aware of her political responsibility (esp. vis a vis her responsibilities towards Austria) than the film portrayed. And they didn’t age Dunst’s face to match MA’s aging (she really showed her stress in her looks; as soon as the revolution started, she apparently aged very quickly — lost a ton of weight, hair went white, etc.). And the film was consciously taking an artistic bent, obviously in terms of music but also costumes, dialogue etc. But personally, I’m okay with that. The reality is that there are very few filmmakers interested in faithfully recreating history. While some may wish for that, if it wasn’t the filmmaker’s goal, I think as an audience member we can chose to say “It’s not aiming to be accurate, I’m not interested” or let it go and evaluate it on its own terms. Which I did, and I LOVED LOVED LOVED it.

And the costumes. Oh, the costumes. You could have eaten them with a spoon! Again, certain elements were changed for artistic license (esp. the shoes), but they were all GORGEOUS. Except for Dunst’s marriage dress, which didn’t really grab me, and du Barry’s weird gowns, it was all ravishing. They really got the color palette right, with every gown looking like some kind of pastry. Beautiful, heavy silks; gorgeous hats; just all amazing. I loved the sacques, of course, and anglaises, but most especially: the blue anglaise with the zone bodice (the one we’ve seen 100 pics of online), the chemise gowns (gorgeously cut and not shlumpy at all!), the pale pale green redingote MA wears for all of 2 quick scenes (I think I may have to make this one — turned back collar, closed in front with like 3 sets of metal buttons on each side); and the very 1790s redingote (double breasted, big collar, big pointy-crowned hat) worn by Polignac as she is leaving Versailles.

I loved it so much, I could really go watch it again right now. Oh, and I wanted to recommend that you read Roger Ebert’s review — I’m pretty much right there with him on all of his points.