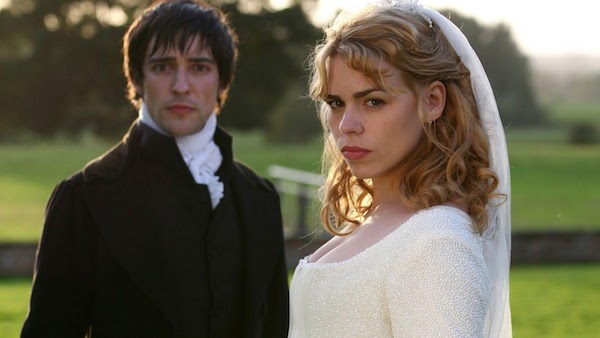 One of three ITV Jane Austen adaptations from 2007, this production attempts to be more modern and relevant (à la the Kiera Knightly Pride and Prejudice) — and, predictably, fails as a result. Billie Piper is a giggy, spunky Fanny very unlike the novel’s character (who, granted, is the hardest of the Austen heroines to get imho). The story is changed around a decent amount with some just plain weird choices (a picnic instead of a ball for Fanny’s birthday [why?], Fanny being left behind at Mansfield instead of sent home, etc.). The costuming is all over the place, with some semi-decent and even interesting gowns — but a lot of really bad ones. Mrs. Norris and Lady Bertram wear very 1780s-style gowns in the early “young Fanny” scenes, but look exactly same in the later “adult Fanny” era. Many of the women wear evening gowns during the day. Even dresses that I really liked (like Maria’s stripey wedding outfit) are offset by having modern fitting to them. Fanny wears a total mishmash, often in 1790s-esque gowns (cone shaped V front bodices with the short 1790s waistline) — I assume to show that she’s wearing old dresses, but wow – should Fanny have that much cleavage? And her hair – oh god, her hair. It wasn’t BAD per se as a film to watch, but it wasn’t good as an Austen adaptation and I have to say the 1999 feature film (which has a lot of problems!) is better.