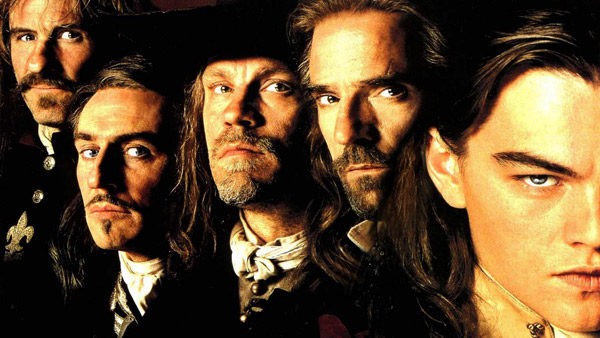 I am taking time away from my busy schedule of watching Aiden Turner’s entire filmography to discuss The Man In The Iron Mask (1998). It’s a serious hardship, I tell you, since I’m just past the first episode of the third season of Being Human, and, like, GUYS. HE IS LITERALLY THE HOTTEST THING EVER.

Anyway, since I apparently co-created this blog to talk about costume flicks and not just Aiden Turner’s supreme hotness, let’s get this over with. I think it’s safe to say that I like the dark, swarthy type (considering my previous obsessions with Adrien Brody and his towel and now the aforementioned Mr. Turner), so blond guys have never really done much for me. I guess that’s probably why I never understood the appeal of Leonardo DiCaprio.

Like many of us who spent the bulk of our teens in the 1990s, I remember the Leo Craze when it first started. Vividly. Mainly because I couldn’t figure out why on earth ANYONE thought Leonardo DiCaprio was attractive. Of all the young actors in Hollywood, why was everyone so fixated on him? At the time he was just an ok actor, sort of middling-to-fair (he’s definitely improved in the last 20 years, I will grant him that), but he was just so weird-looking, and not in an Adrien Brody or Owen Wilson kind of way. In fact, I always thought he looked sort of like an alien. 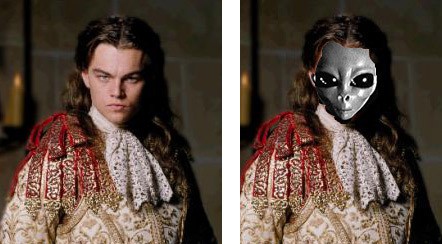 The Man in the Iron Mask was obviously one of those films that was attempting to capitalize on Leonardo DiCaprio’s late-1990s sex appeal. Based on a plot line in one of Alexandre Dumas’ D’artagnan Chronicles, the film develops on a 17th century conspiracy theory that the French King Louis XIV was actually the younger twin brother of the rightful heir to the throne, Philippe (no relation to Louis XIV’s actual younger brother, Philippe, who — not surprisingly — is not in this film), who was being kept in the Bastille and forced to wear an iron mask 24/7 to hide his true identity. It is up to the Four Musketeers to free this young man and help him reclaim the throne that is rightfully his. Leo stars as both Philippe and Louis XIV, and is painfully out-classed at every turn by an insanely talented ensemble cast made up of Jeremy Irons, John Malkovich, Gerard Depardieu, and Gabriel Byrne — which doesn’t really matter because all Leo really had to do was stand there with a pulse and send millions of teenage girls into fits of ecstasy and millions of dollars into United Artists’ coffers.

It also features a VERY underutilized Hugh Laurie as “King’s Advisor #1”, which is depressing. If there’s one thing that would improve any movie, it’s more Hugh Laurie. 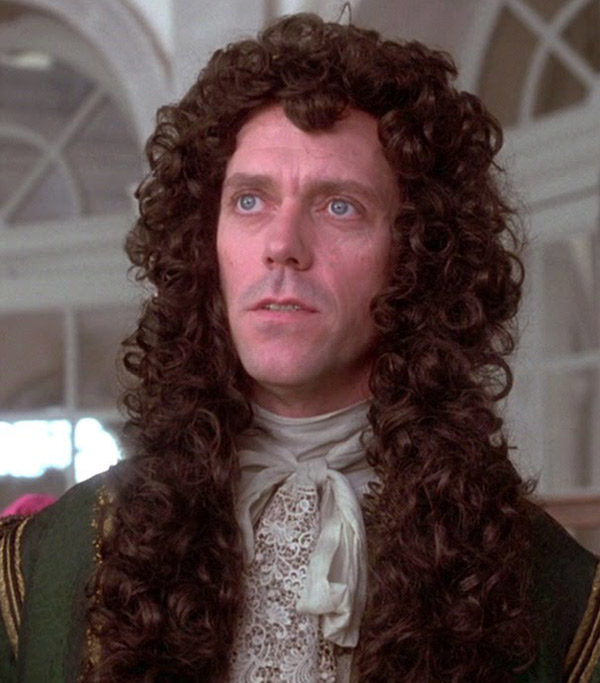 Wasted opportunity, if you ask me.

The hardest thing about the film is the fact that the casting is so uneven. On the one hand we have the Musketeers: D’Artagnan (Gabriel Byrne), Porthos (Gerard Depardieu), Aramis (Jeremy Irons), and Athos (John Malkovich). Four incredibly talented actors that pretty much defined the 1980s and 90s.

On the other hand, we have Leo as both King Louis and Phillipe (he’s better as Phillipe for some weird reason), French actress Judith Godrèche as the ingenue Christine, and Peter Sarsgaard as Roul, Porthos’ son. They all objectively are crap, though I’m willing to give Judith a pass because of the language factor and all. Then again, please feel free to tell me if I’m being too nice.

Anyway, thankfully this post isn’t about the acting, but the costuming. The best thing this film had going for it was that the costumes were by one of Frock Flicks’ personal favorites, James Acheson (Dangerous Liaisons). Since Acheson was in control of the costume design, the costuming is above average considering it was written and directed by Randall “Facts Get in the Way Of the Plot” Wallace of Braveheart infamy. It’s surprisingly rich with extras being as gorgeously attired as the principles.

That said, I had one major issue with the costuming for a certain character. Namely, Anne of Austria’s costume. I get that they’re trying to differentiate her from the rest of her son’s over-the-top court. She’s supposed to be old fashioned, austere, the last vestige of the old guard clinging to relevancy in Louis’ glittering court. The way Acheson attempts to do this is by putting her in an out of fashion gown. Problem is that it’s not just 20 years out of fashion, but more like 50 years out of fashion. It’s still a nicely done outfit … It’s just totally wrong for a former Queen of France to be wearing. 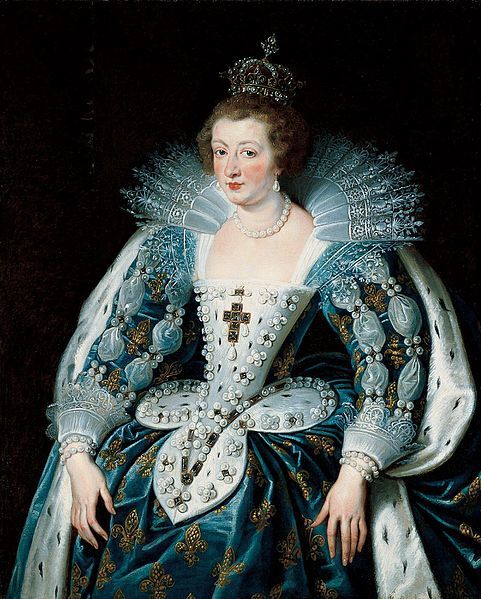 Actual Anne of Austria around the time of her marriage to Louis XIII — by Rubens, 1622-25, Norton Simon Museum 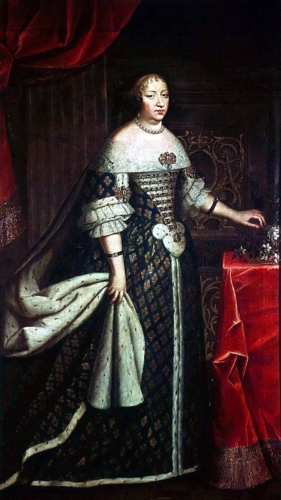 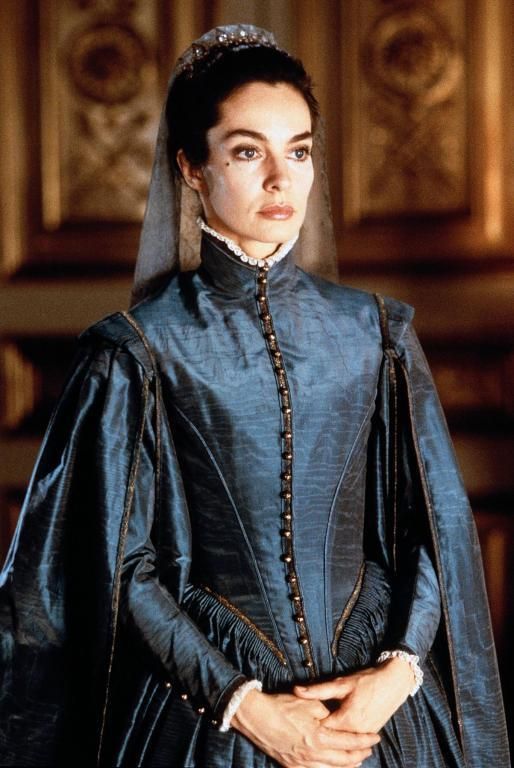 Movie Anne of Austria, wearing something her mother probably would have worn. Also, I was totally prepared to make some snarky comment about how the actress is probably five years older than Leo, but then I looked at imdb.com and turns out, Anne Parillaud is 14 years older than him. That said… Anne of Austria was 37 when she gave birth to Louis XIV. 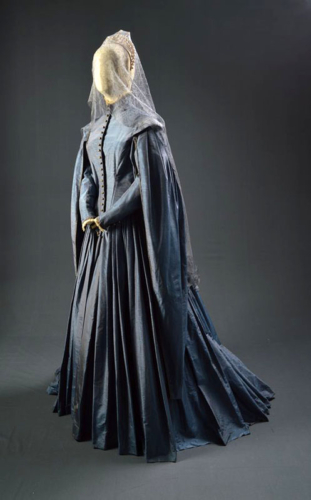 Still, it’s a really nice gown! It just is way more 1610s Spanish than anything remotely like what would have been worn between 1620-1660 in France when Anne was still heavily involved in her son’s reign. 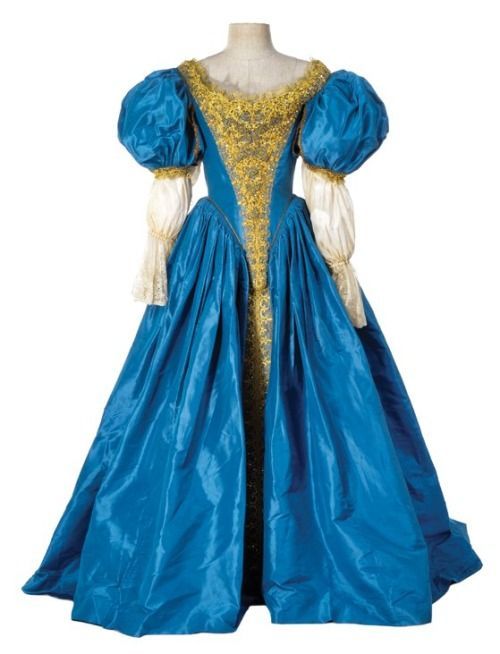 She does get a more contemporary styled gown for the 1660s, though. 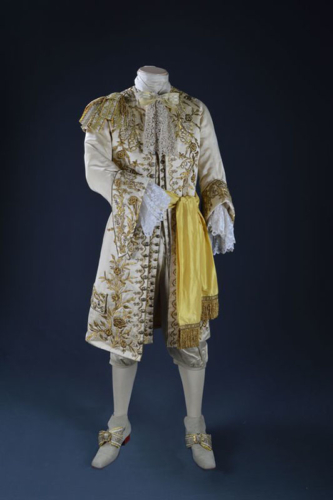 Louis’ gold embroidered coat. It’s kind of a stretch for 1662 to have a frock coat and breeches — men were still rather attached to their petticoat breeches that early in the 1660s. 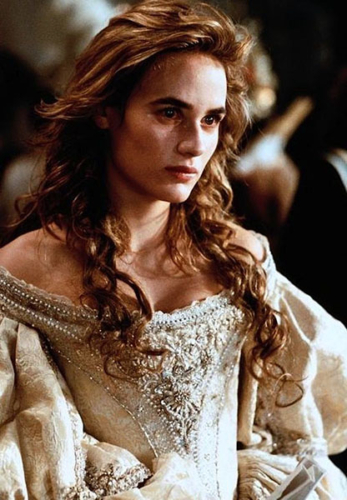 Christine. I guess she’s pretty in that kind of late-90s way. The beachy waves are not exactly selling it for me, but I really like her gown. 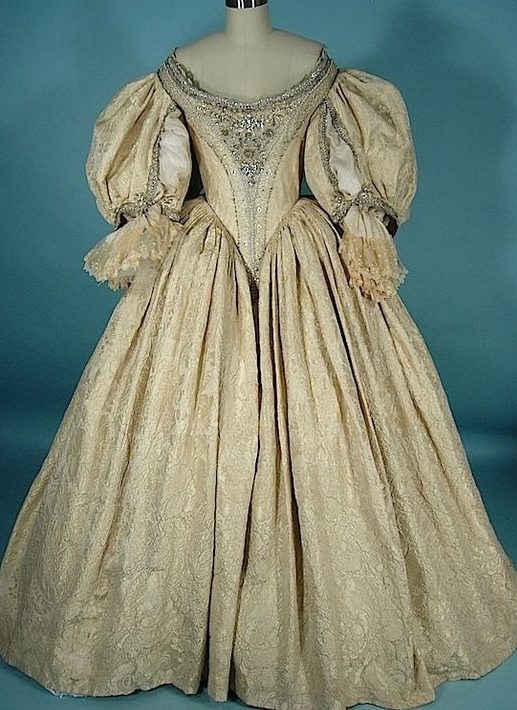 The dress is a total stunner in real life.Talk about the wedding gown of my dreams… 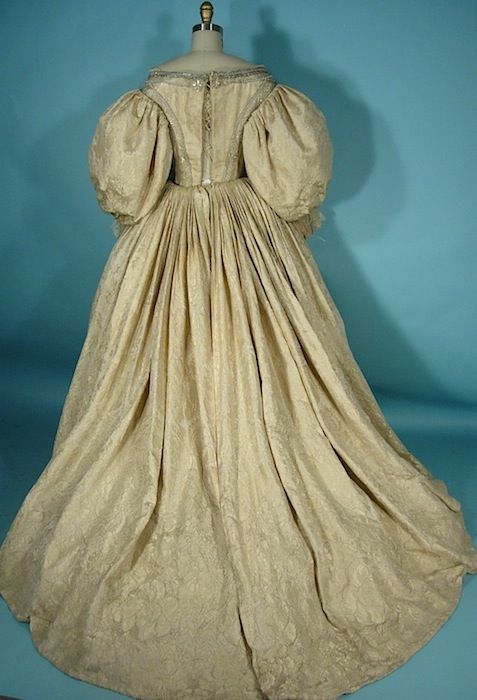 Loads of fabric in the skirt and that great sweeping train. 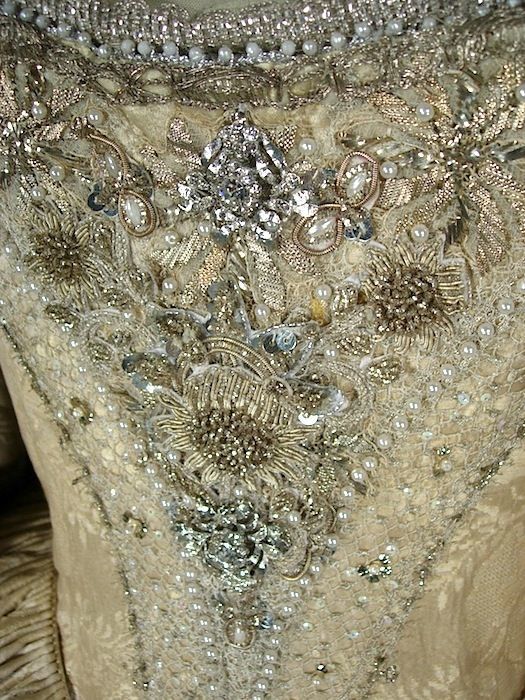 I love James Acheson for this reason alone. The densely layered embellishment on this gown is fantastic. Who cares if its all probably glued on plastic pearls and chopped up bits of sari embroidery? It looks AMAZING. 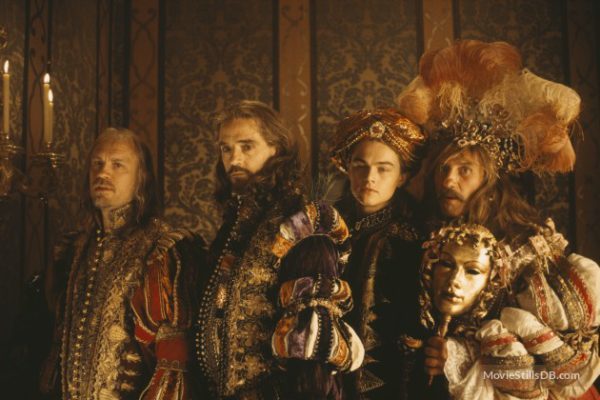 Masque costumes are always a favorite of mine. They’re a chance for the costume designer to really pull out all the stops and showcase their skills. 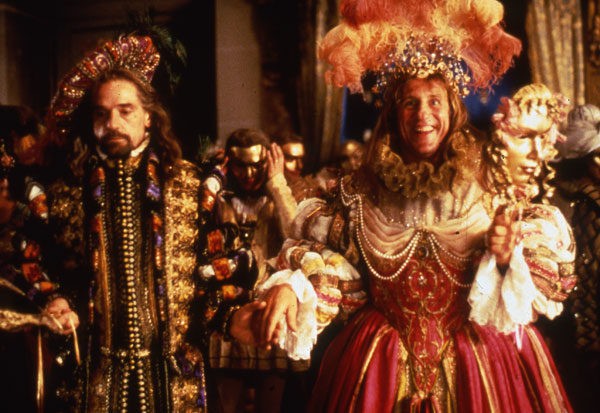 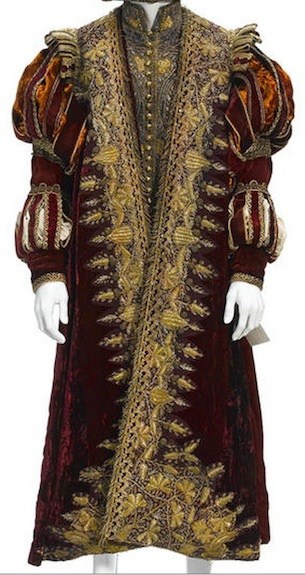 One of the masque costumes from the front…

And from the back. 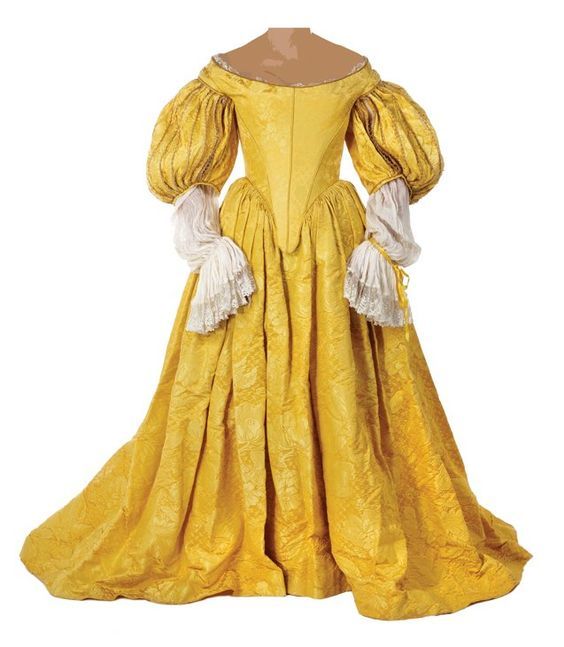 I am in love with Christine’s yellow damask gown. It’s exactly the shade of yellow I look fabulous in. 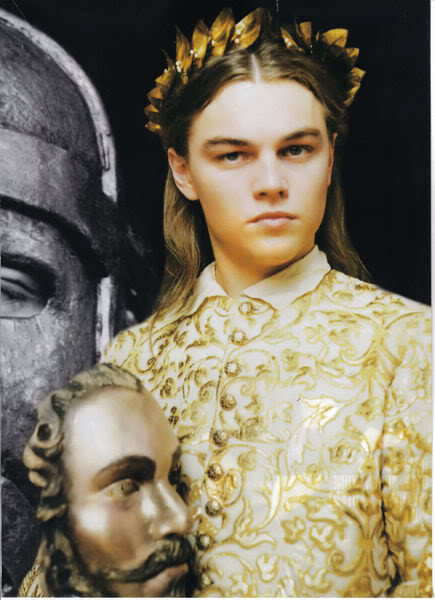 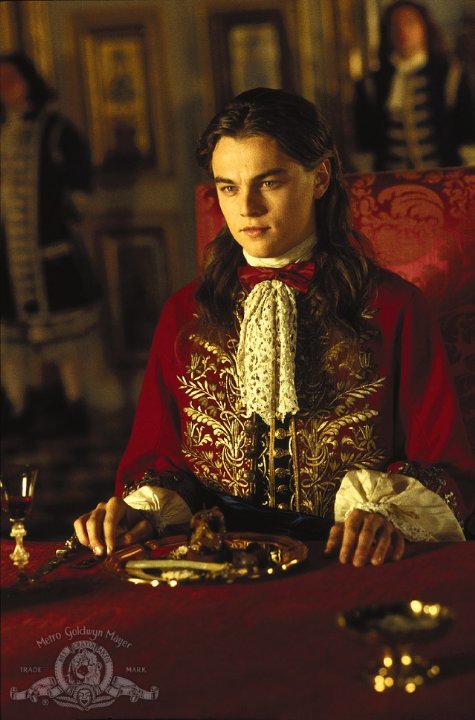 Better… At least he doesn’t look like a six-year old girl in this shot. 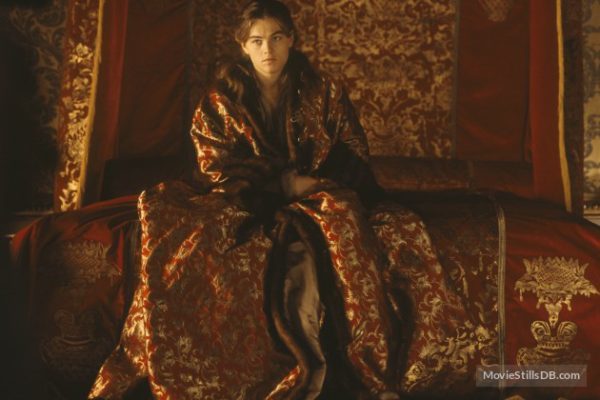 Ok, if you drape enough fabulous silk damask over him, I wouldn’t kick Leo out of bed. 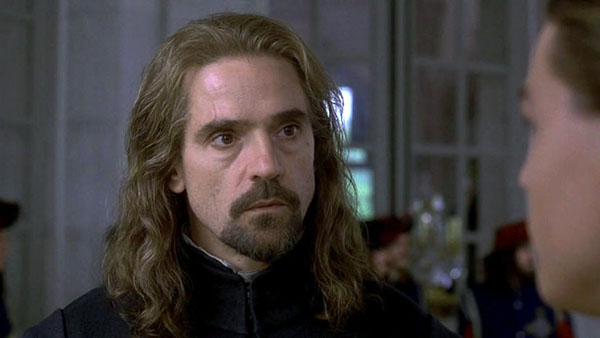 Jeremy Irons is pretty much the hottest thing in this movie. And all he does is wear a black cassock and look sexy. Works for me! 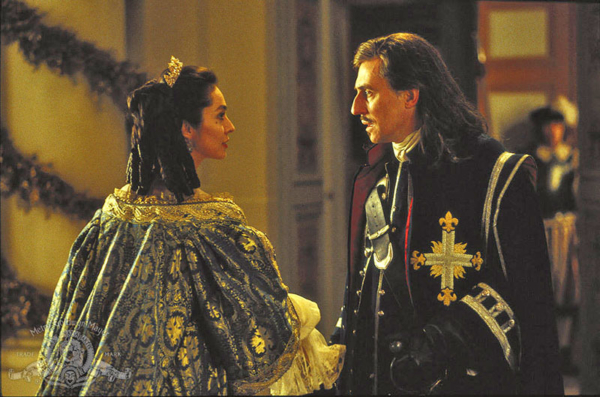 LOVE this dressing gown on Anne of Austria and would very likely kill to get my hands on some of that fabric. Also, I really liked that they went for densely embroidered Musketeer badges. The badges are most likely machine done, but they don’t look like they’ve been painted on with puff paint like the ones in the 1993 Three Musketeers. Clearly there was an actual budget and someone in control who knew what they were doing. 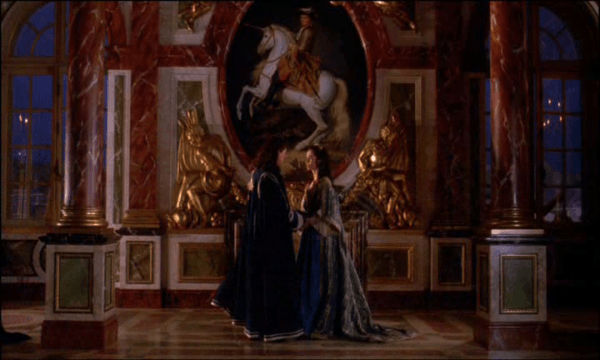 < art historian > I’m reasonably certain that that portrait was painted at least 50 years in the future from when this film was set. < /art historian >

What are your thoughts about The Man in the Iron Mask (1998)? Share them with us in the comments!