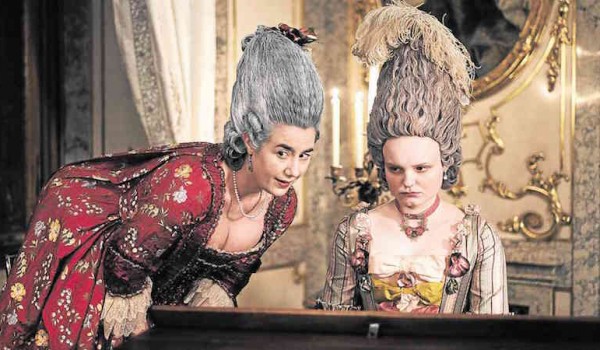 Mademoiselle Paradis is a 2018 German-language, 18th-century film about a real-life blind pianist — Maria Theresia von Paradis — who was briefly treated by doctor Franz Mesmer. His treatments, based on an invisible “energy” (his last name is the origin of the English word “mesmerize”), actually start to work, but then Paradis starts to lose her ability to play piano… 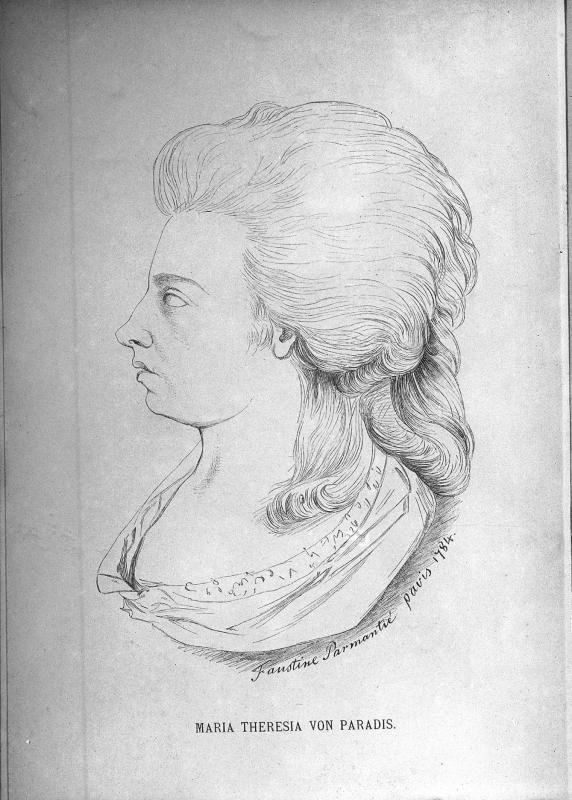 It’s an interesting film with some overall nice costumes, and it recently became available for streaming in the U.S. on Amazon. I definitely recommend it for an unusual storyline and the performance by lead actress Maria Dragus. 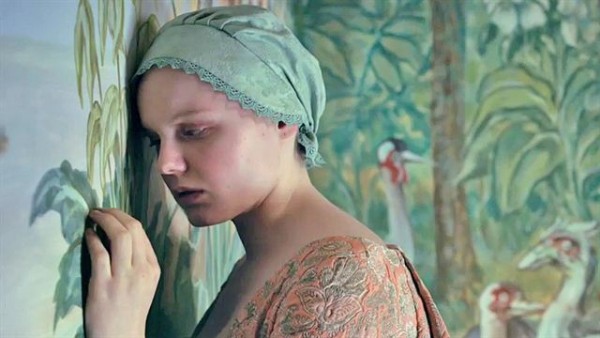 The costumes were designed by Veronika Albert, who has mostly done contemporary-set, German movies. This film takes place in 1776-77, and Albert does a good job with getting the era right. There’s a lot of robes à la française (sack-back gowns), a few gowns that are more anglaise in style, and she uses mostly appropriate fabrics with a few too many obviously machine-embroidered elements, but that seems par for the course these days. 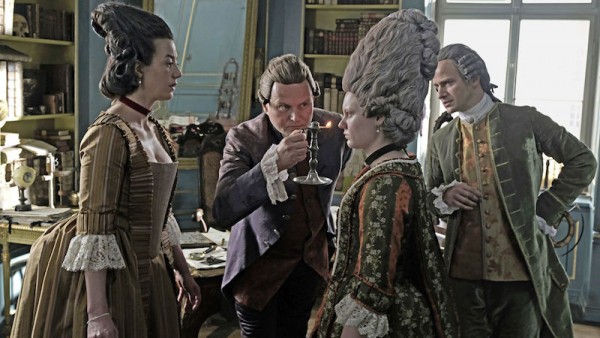 When she’s dressed by her mother, Paradis primarily wears heavy, clunky robes à la française, demonstrating how much she’s controlled by her well-meaning but bumbling parents. 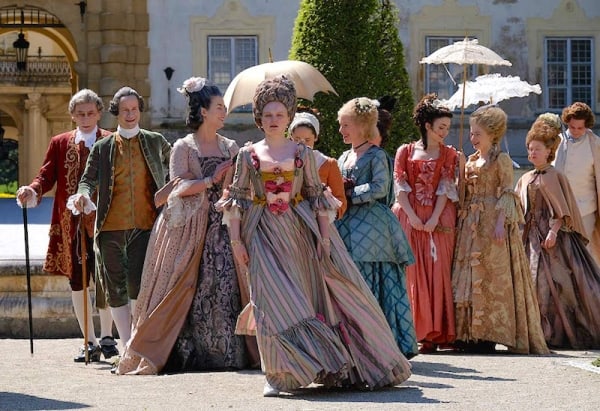 This stripey française with lots of stomacher bows is her main “fancy” dress. 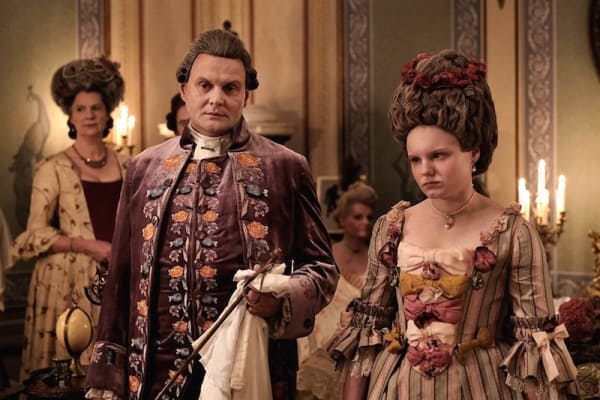 The trimming is a bit overwrought. 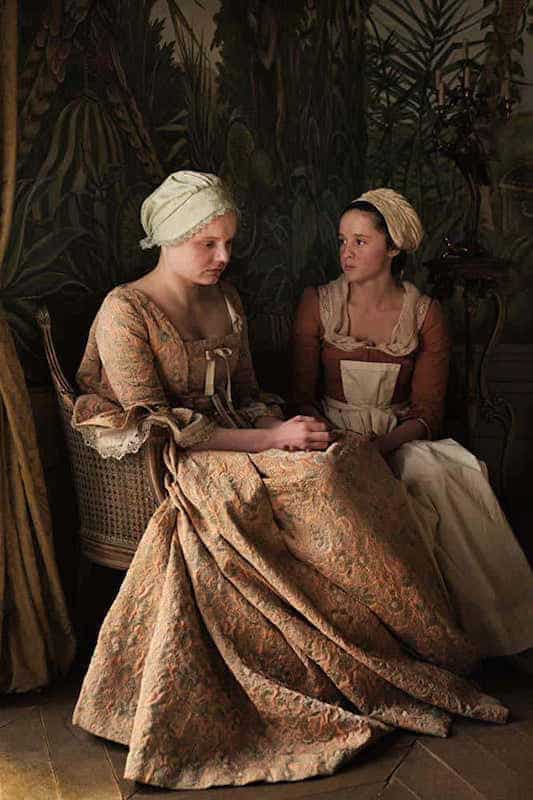 Mesmer encourages Paradis to dress simply while she’s staying with him. The servant outfit’s is very obviously influenced by Liotard’s The Chocolate Girl. 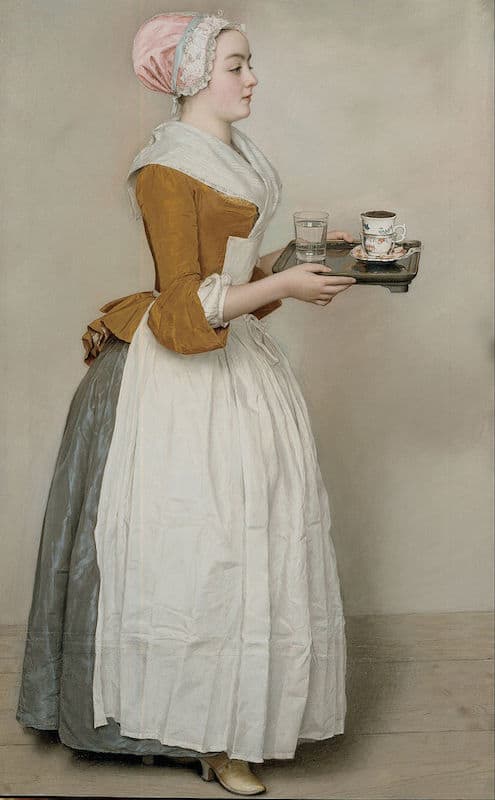 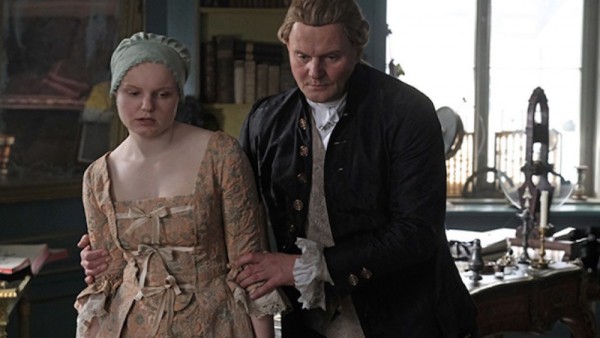 I like that she clearly isn’t wearing stays with this dress. 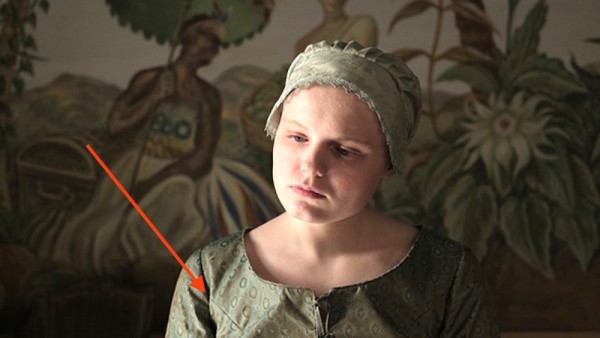 But I question the princess seam on this jacket (and the paisley-esque fabric). 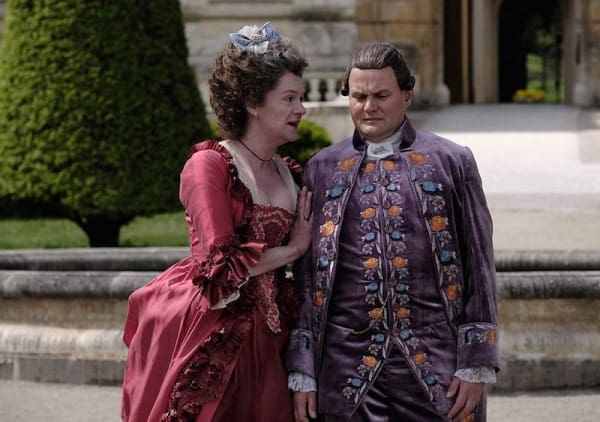 Mesmer and his wife. His outfit was REALLY bright on screen, and that embroidery is so obviously machine made — and I question those flowers, which look almost Hawaiian to me! 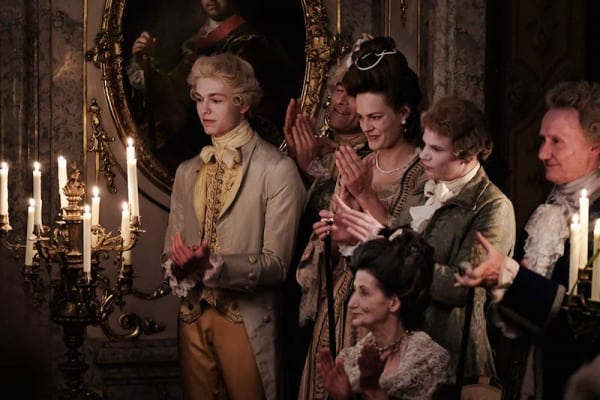 The rest of the cast looks mostly good. 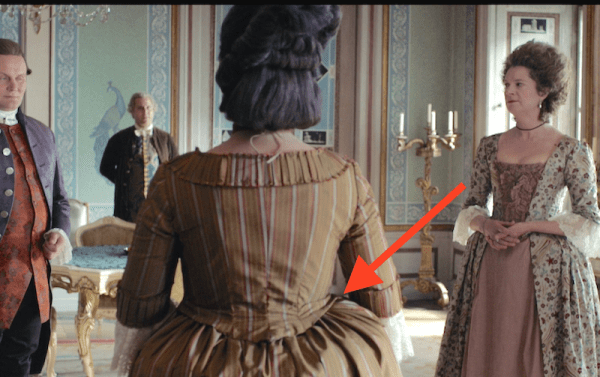 Although somebody winged the fit on the back of mom’s dress here. 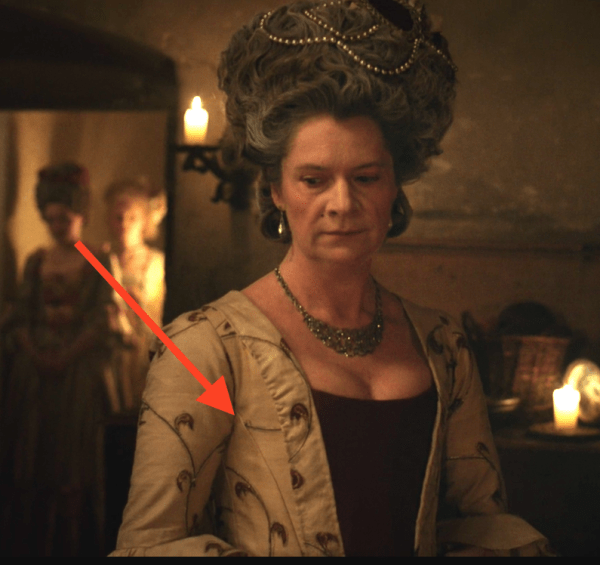 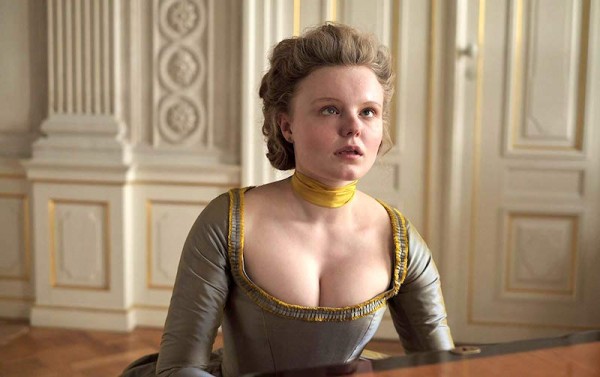 At the end of the film, the dress style changes to show the progression of time, which I liked. What I didn’t like was that this dress obviously has a back closure, although I laughed because they used hanging tales on that neck ribbon to hide whatever closure they had when they shot from the back! 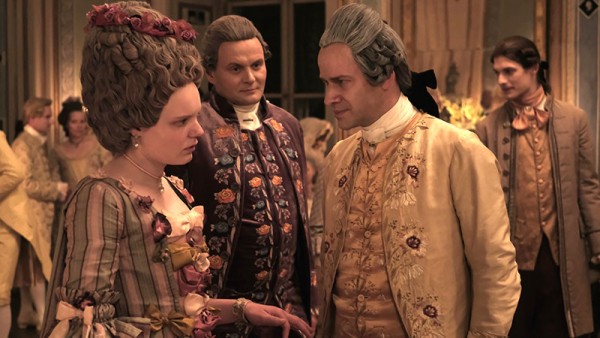 The hair was great. Paradis wears a clunky wig for public occasions, but again, the clunkiness works because 1) her mother is choosing things for her, and 2) she’s dressed up like a trick pony, and 3) her life is oppressive. Note dad’s wig on the right, though, with FABULOUS toupee (the rolled/high top). 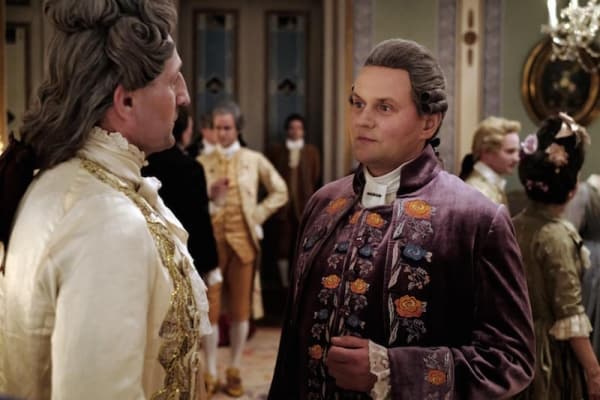 This guy on the left shows how nicely they did the back of the men’s wigs. SOMEONE UNDERSTANDS THE BASIC SHORT/LONG THING IN 18TH C. MEN’S WIGS. I FEEL SO UNDERSTOOD! 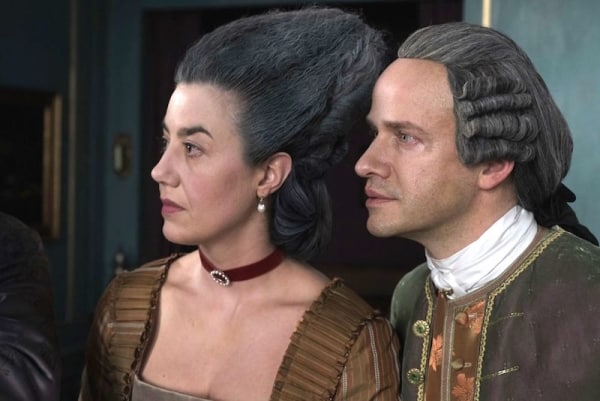 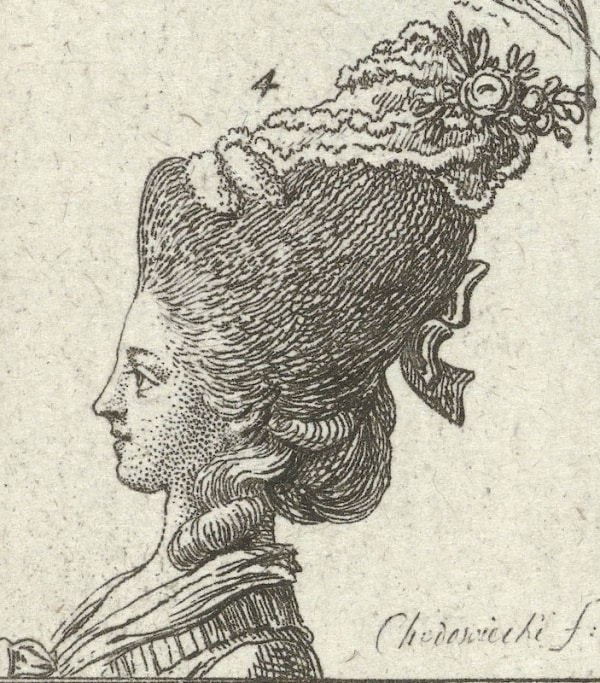 It totally reminded me of those really angled styles you see in the late 1770s, like this one: Lauenbergers Genealogischen Kalendar für 1780: Coëffures Berlinoises, Daniel Nikolaus Chodowiecki, 1779, Rijksmuseum 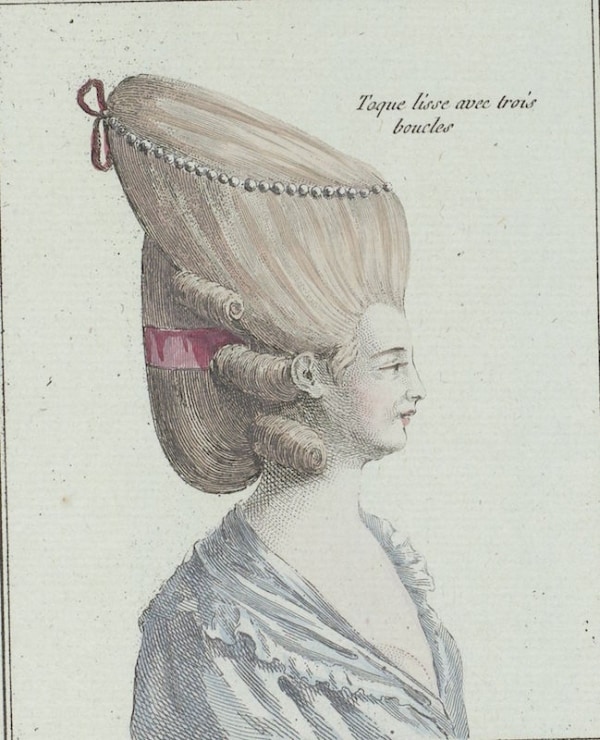 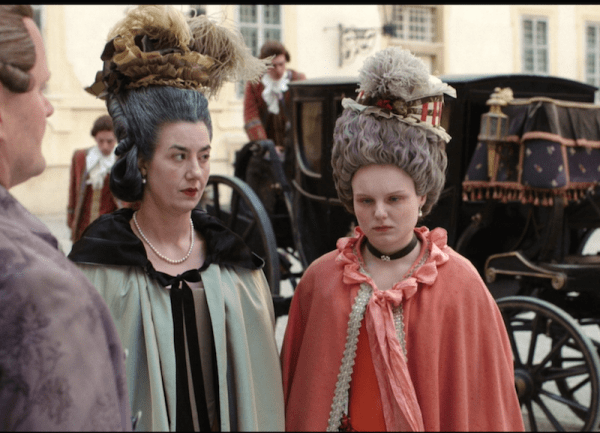 There wasn’t much in the way of hats except for these, which were so good I had to screencap. FLOOOOF!

Any thoughts on Mademoiselle Paradis?