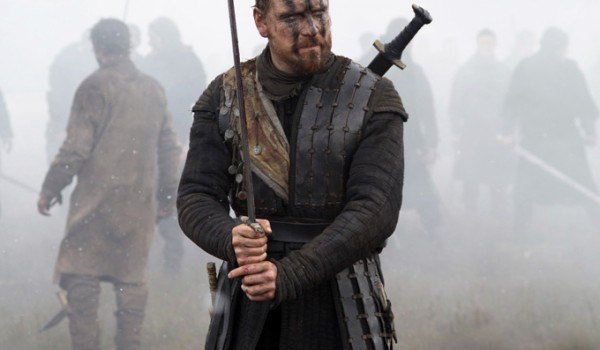 The Macbeth (2015) trailer dropped a few weeks ago, to little note among the historical costuming community. Which is a damn shame, since if you’re at all into early medieval costume, you have got to check out the costumes in this film. Costume design was by Jacqueline Durran, who has a pretty good accumulation of historical movies under her belt, including three recent Keira Knightley vehicles, Atonement (2007), Pride & Prejudice (2005), and Anna Karenina (2012). If you’re judging her work based on those three films, you’re probably skeptical about how Macbeth is going to end up looking (since two of the three aforementioned films got absolutely slaughtered by the costuming community when they were released). However, I’m on picking up what Durran is putting down as far as these stills from Macbeth are concerned.

What we know of clothing in early medieval Scotland isn’t much, but we can make assumptions about what their nobility wore based on the fact that this was a region that had extensive contact and close ties with the Norse. That Durran has chosen to season her costume designs with a definite Norse flavor makes me a little giddy.

Lady Macbeth is played by Marion Cotillard. One of the fiercest roles for women written by the Bard, I can’t comment on how well Cotillard is going to handle the role, but I can say that I really like what Durran is doing with her coronation gown. Here’s another pic of the gown, this time without the veil and short cape: That looks an awful lot like a hangerock, doesn’t it?

Something similar to this, by Linda. Via Hantverkat.

The strands of pearls appear to be held up by brooches, which definitely are evoking a “Viking dress” vibe for me. It’s combined in a really interesting way with a Byzantine flavor, too. Maybe it’s all the pearls… I don’t know what’s up with the blue eye shadow across her eyes and nose, though. I swear I’ve seen that coronet in the SCA…

Macbeth is played by Michael Fassbender, who is totally believable as the antihero Scottish king on account of being all huge and red headed. He’s shown in the trailer wearing what are presumably his coronation robes, which are definitely swinging away from the Norse influence and going for the Byzantine look. Simple white tunic, lavish silk cloak held at the shoulders by a pair of brooches and a chain. He’s got some kind of stole going on, too, which I’m not sure of as far as where Durran got the idea, but it looks pretty legit in combination with the rest of his outfit. The art historian in me is kind of twitching about the clearly high gothic tracery on the altar on in the background, but I’m not going to let it dampen my enthusiasm for the aesthetic here. Pay no attention to the high gothic tracery in the background… Once again, definitely going for a Rus/Norse look here with the clothing. Can I just say how ridiculously excited I am that there’s not a single kilt in sight? Finally, we get a movie set in medieval Scotland that understands that kilts are a fairly modern adaptation of a wool blanket.

The newest trailer just dropped last week, and it shows the witches:

Hard to see what they’re wearing, but my sense is they’re sticking with the Norse theme. Also, they’re dressed pretty normally, as far as we can tell from the clip. Well, “normally” as one would expect in Dark Ages Scotland, all things being relative.

Do you want to know more about Norse clothing? Check out these books:

Are you looking forward to Macbeth, opening in the US on December 4, 2015?