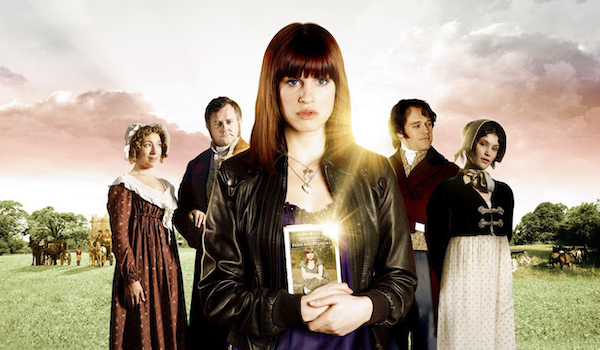 A recent ITV (UK) TV production, this tells the story of a modern day woman (Amanda Price), a huge fan of PandP, who switches places with Elizabeth Bennet at the beginning of the PandP story. The costuming is close to appalling, with everyone wearing what are very obviously cheap stock rentals, and Amanda decides to assert her independence by refusing to ever style her hair in a period style (which made me want to stick a fork in her head) and wearing modern makeup, both of which no one seems to particularly blink at (hello, she’d be a whore and/or insane in period terms!). The story, however, I quite enjoyed with one caveat. Basically, because Amanda is in the story instead of Elizabeth, things go screwy and she spends most of the plot trying to set things to right. It’s fun to see her effect on the storyline and they do a good job of letting us discover bits and pieces about the characters that mesh with the plot as Austen wrote it, but are not as portrayed in the novel. That being said, I have the same complaint as I do about the many Austen sequels, which is that they color my view of the story. It’s hard not to start to integrate these details into the story in your head. But if you don’t mind this issue, I think you’ll enjoy this. I will add, however, that the guy playing Mr. Darcy is, while not entirely miscast as he plays a jerk and a lover well, really not worthy of the part. Many of the other characters are, however, quite well cast — in particular, Hugh Bonneville and Alex Kingston give fabulous performances as Mr. and Mrs. Bennet.