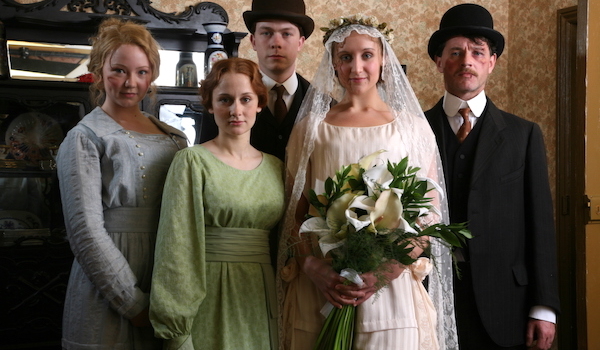 I was so charmed by this series that I can’t recommend it highly enough.  It’s the story of the working class Moss family – primarily three sisters in their late teens/early 20s – and their life in Liverpool in 1920-21. Iris, the eldest, is the surrogate mother of the family. May, the middle, works as a maid for a wealthy couple. Ruby, the youngest, becomes a corset saleswoman. Also involved are their fabulously cranky Dadda and brother Billy (suffering from PTSD following fighting in World War I). The story is one that stays very true to life and takes its time, and you’ll be surprised by the various plot twists and turns. The costumes are very well done, and capture perfectly the transition from teens fashions to the “modern” 1920s. While the Moss family is a bit behind in fashion as befits their class (the daughters wear what looks like very 1918-19 styles), various minor upper class characters wear more cutting edge styles. Some of the most fun comes from Ruby’s corset selling, as you’ll see lots of them plus much discussion of their relative merits and disadvantages.