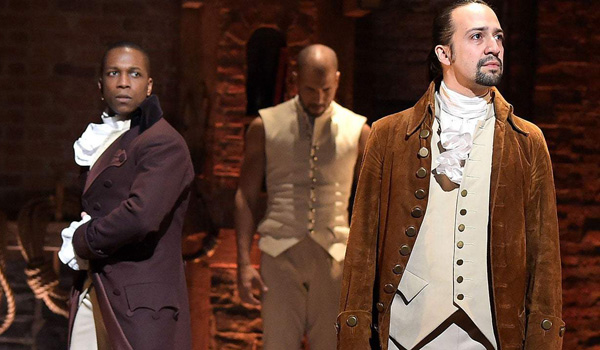 Who signed up for Disney+ this month just to watch Hamilton (2020), the filmed version of the 2016 Broadway play? How many times have you watched it already? Because I need to talk about it, so let’s do this!

Now, I wrote about the original Broadway show’s costumes, designed by Paul Tazewell, back when it swept the Tony Awards, including best costume. I’d only heard the soundtrack myself at that point, and it wasn’t until February 2019 that I saw a touring production of the show. But now, seeing the OG show and, even better, seeing it in my living room, with better angles than any theater seat I could ever afford, well, now I noticed so much more about the costumes!

First, while the Schuyler sisters always wear the same colors — Eliza in blue shades, Angelica in a pale orange-y tone, Peggy in yellow — they have more changes of dress than I’d thought. Some appear to be done with different bodices or over-dress type garments. Eliza starts with the iconic button-front bodice, angled in a very modern fashion, instead of the center-front buttons common in the 18th century. Then she has a rounded “zone” front bodice with a peplum that she wears in “Helpless” and “Satisfied.” This is followed by a maternity gown when she tells Hamilton she’s pregnant. 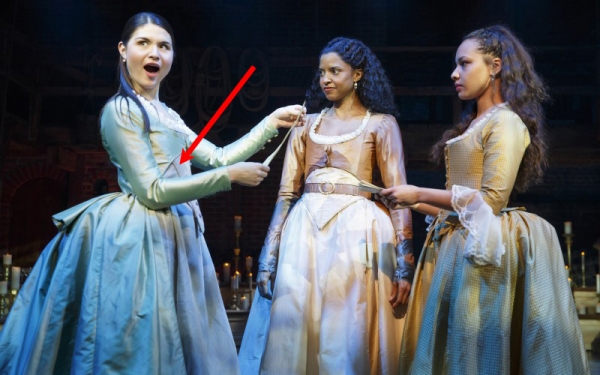 During “Helpless” you can see a little bit of the side buttons of Eliza’s first gown under the over-gown with the “zone” front. 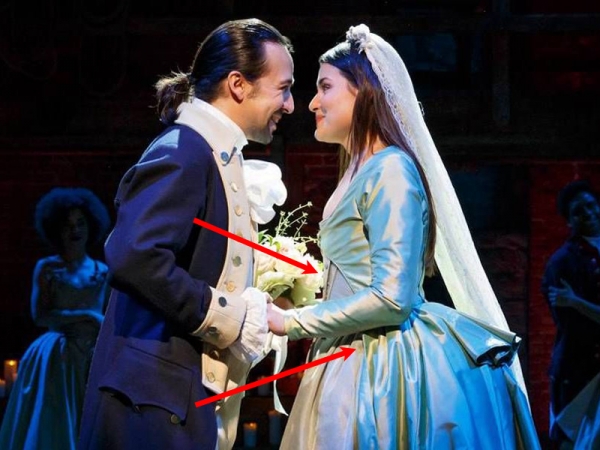 This over-gown situation is more clear in their wedding.

Angelica’s first gown in the “The Schuyler Sisters” number has a curiously sweetheart shaped front. Then she quickly changes to a rounded “zone” front bodice with center-front buttons at the start of “Right Hand Man” as George Washington is introduced. This one is more historically accurate than her first one. She has a jacket-type bodice when she marries and moves to England. 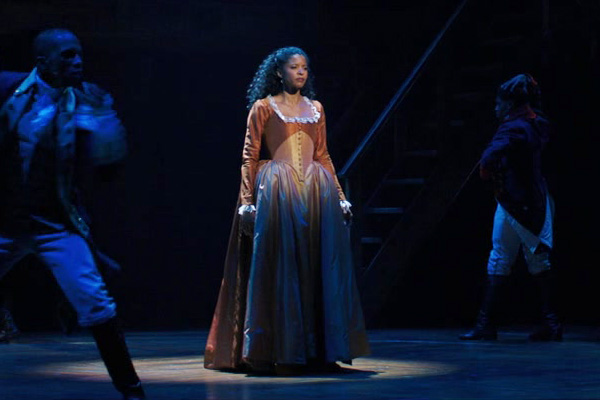 This has to be a different gown than her first one. 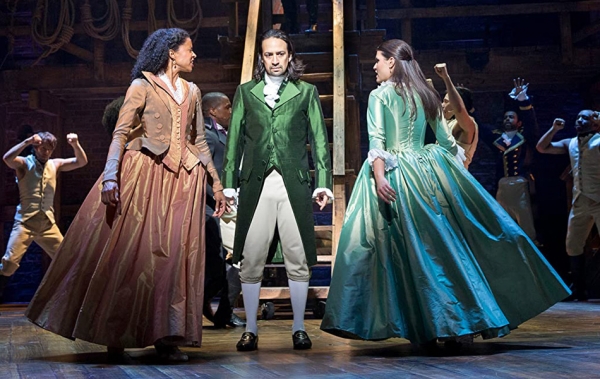 But this could be a jacket over another gown.

Even Peggy, the most minor of characters, gets a different bodice for “Helpless” and “Satisfied” than she wore in “The Schuyler Sisters.”

In Act 2, starting with “Schuyler Defeated,” the women’s clothes change up to show the passage of time. Eliza is shown wearing the slim silhouette of the 1800s in a pale blue and white gown. When her son is killed, she adds a black pelisse coat over this and wears that through “It’s Quiet Uptown.” When Angelica returns in Act 2, she’s also wearing an 1800s gown with a two-tone bodice that almost looks like she’s wearing a spencer jacket. Then she wears a black pelisse coat when she sings in “It’s Quiet Uptown.” 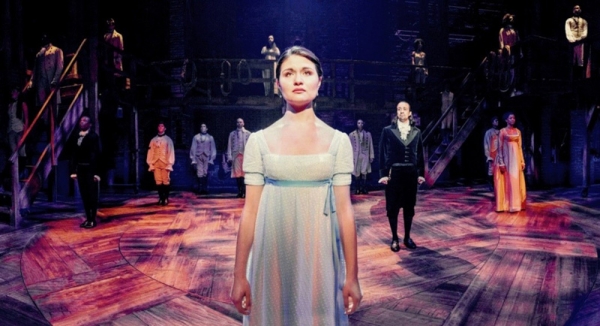 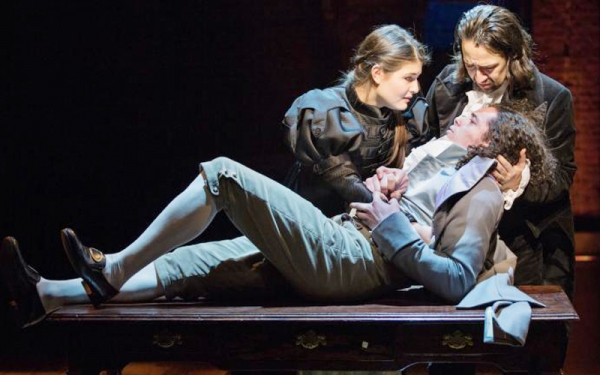 But gorgeous details on this pelisse coat that is barely seen on stage & even on TV, you can just catch glimpses of it!

The ensemble women’s costumes also change up. Four of them wear full skirts for scenes in Act 1, and in Act 2, they wear short 1800s-style spencer jackets or even pelisse coats over their corset-tights-boots outfits. 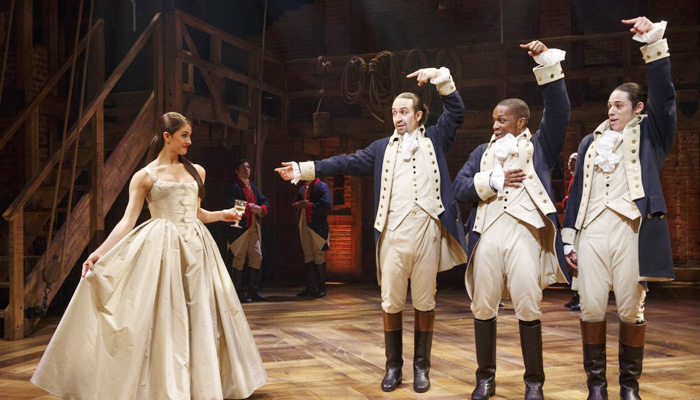 The men’s costumes go through just as many changes through the course of the nearly three hours. Notably, Aaron Burr is the only character who doesn’t have a pale parchment “ensemble” style outfit. Hamilton himself and all the major characters, male and female, start out in that pale outfit, except for Burr in the first song, “Alexander Hamilton.” This emphasizes Burr’s role as the narrator of the story. He’s the first one to speak, and he introduces most of the major action, talking directly to the audience. This is Hamilton’s life, but the truism of “who lives, who dies, who tells your story” is evident in the first scene and hinted at with this first costume. Burr lives, and he tells the story up until the very end. 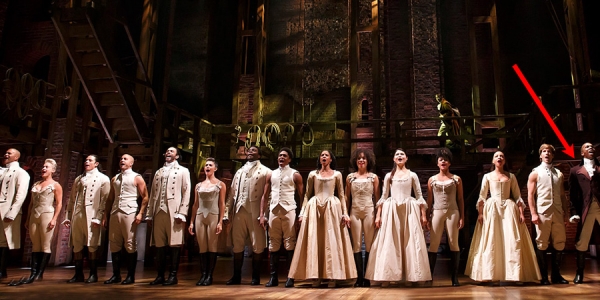 Burr is also the first male character to switch from a 1770s frock coat to an 1800s-ish high-waisted coat right after the war scenes in “Non-Stop.” James Madison is the next character shown in this coat when he’s introduced in Act 2, signifying the time change, and eventually Jefferson and Hamilton both wear the later-period coats.

And finally, some of my observations about the performance in this filmed Disney version. Jonathan Groff as King George really adds a maniacal touch that doesn’t come through in the soundtrack. He definitely plays up the “mad King George” idea (and more so than the touring production I saw). Yeah, he’s spitty, but it’s also his crazy eyes and body movements — it’s an overall characterization that really fills out this otherwise minor character. 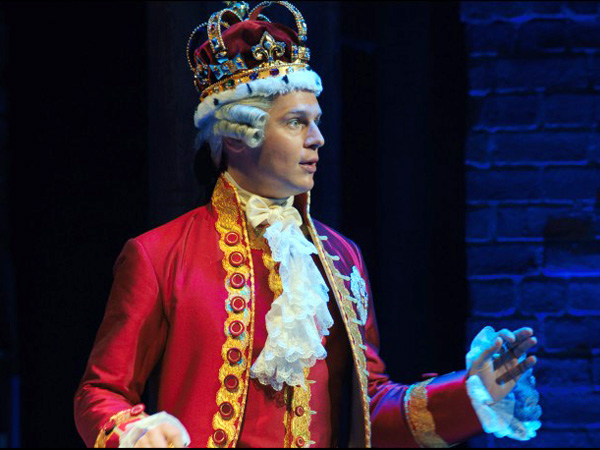 Christopher Jackson as George Washington brings a rich emotional quality to his stage performance. I cried when he sings “One Last Time,” which doesn’t get me on the soundtrack in the same way. (OK, I cry a lot during this show!)

I’m not the first to have noted how Lin Manuel Miranda doesn’t have the strongest voice in the whole cast. As the composer, he adeptly gives the heavy vocal lifting to other roles, especially Aaron Burr but also George Washington and Angelica Schuyler. Alexander Hamilton is not the role which tells the story and sings the big songs. This really is a great ensemble show, and there are songs for everyone to shine.

OK, that’s just some of my thoughts on the costumes and performances. There’s a million things I haven’t done, er, said, about this musical, but how about you?

What do you think of Hamilton on Disney+?