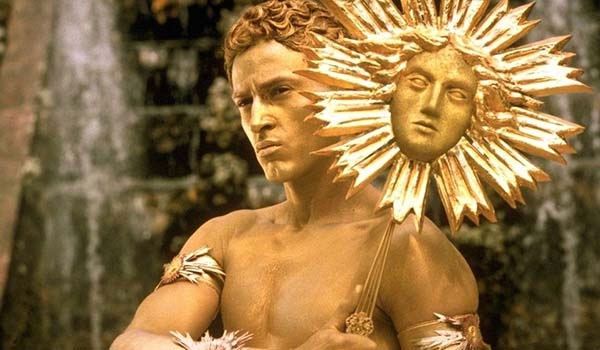 Le Roi Danse (2000) by Gérard Corbiau manages to do what Corbiau’s earlier film, Farinelli (1994), couldn’t: create a lavish historical spectacle without being cringingly cheesy at every turn. It’s really difficult to not compare the two films since the themes are virtually the same: Handsome Italian Musician goes to a foreign court and becomes a sensation, then falls from grace when the king grows bored with him. Epic tantrum ensues. HIM repudiates his oldest ally and friend. Some weak-sauce sex is thrown in for good measure. The end.

Unlike Farinelli, however, Le Roi Danse appears to have benefited from a larger budget and a better script. Also, no mullets.

The film centers on court composer and dance master, Jean-Baptiste Lully, who finds in the young Louis XIV inspiration for crafting the persona of the Sun King. It’s high drama, but it is gorgeous to watch — the emphasis on dance (particularly the mid-17th-century ballet that Louis excelled at) winds up creating a kind of choreography throughout the entire film, particularly in the movements of the two main characters, Lully and Louis. Boris Terral plays the darkly handsome Lully, and he’s far more capable in this role than Stefano Dionisi was as the very similar Farinelli. Benoît Magimel’s Louis was hands down the best thing about this film; he’s gorgeous, devastatingly elegant, and almost god-like, which is exactly what I’ve always imagined the real Louis would have been like. Consider him my new boyfriend. As far as the history goes, well … Let’s just file this one under “Plays Fast and Loose With History” and sit back and let the art wash over us.

The costumes were designed by Olivier Bériot, and while they are definitely theatrical, so’s the rest of the film. It’s eye-candy, not historical accuracy. The two main characters are devoted the most interesting costumes, and everyone else is, literally, set dressing. Lots of glittering synthetic fabrics and costume jewelry, which are admittedly pretty dazzling as the court forms the backdrop of most of the action. It makes for spectacular visuals, but it’s not going to top any lists of historically accurate costume movies.

So, let’s take a look at some of the costumes! 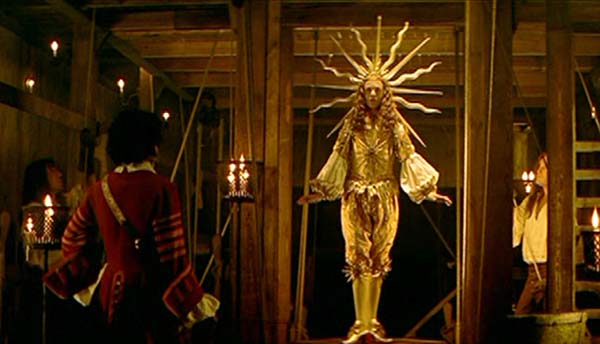 The young Sun King and worshiper. 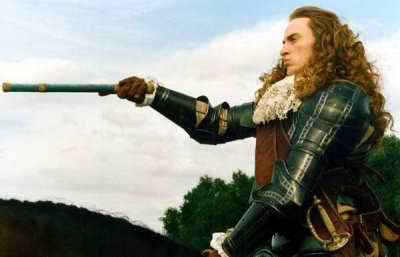 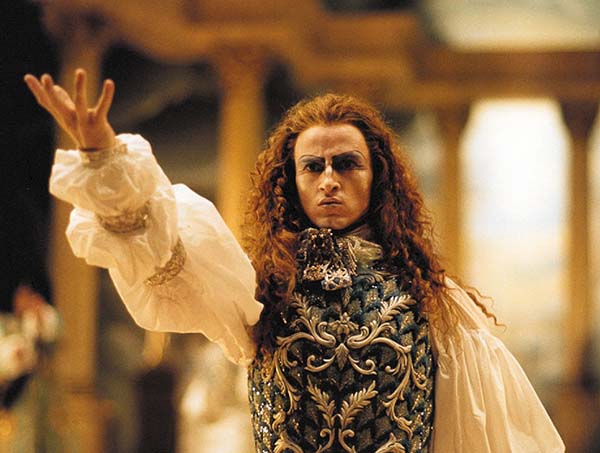 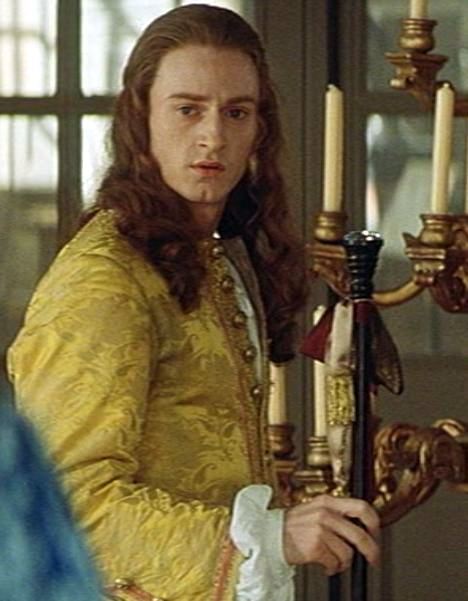 Louis dance practice costume is one of the better outfits in the film. Also, is it just me or is he a dead ringer for Lee Pace? 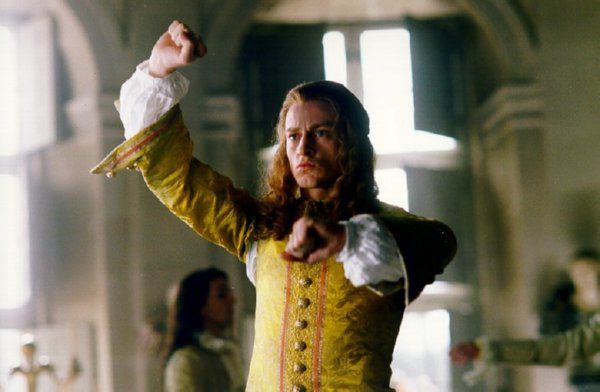 Note how the sleeves aren’t attached all the way around to give the full range of motion in the shoulders. 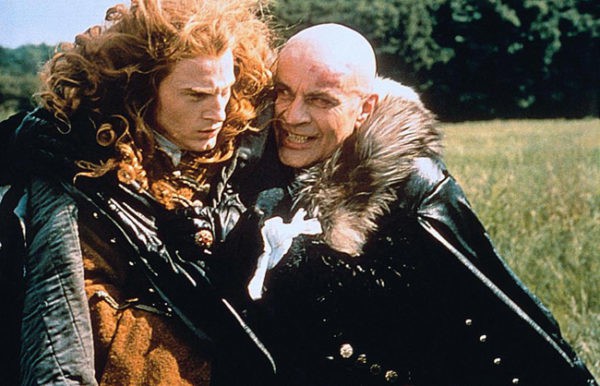 Pay no attention to the creepy bald guy. Just look at all that hair. Hnng. 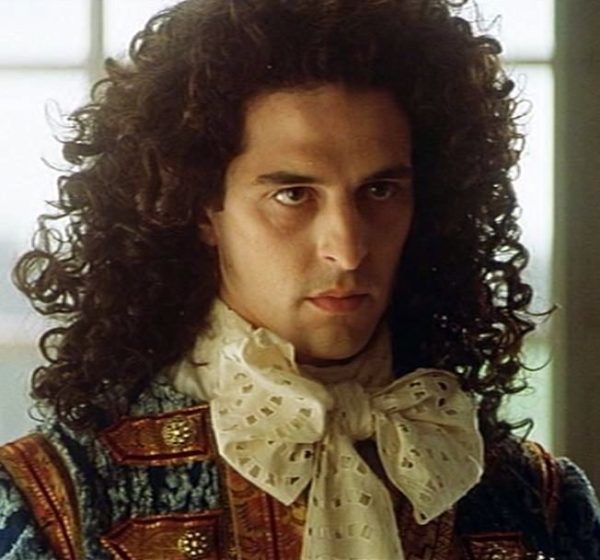 While I didn’t love the mass of unruly curls on Lully, at least it’s not a mullet. 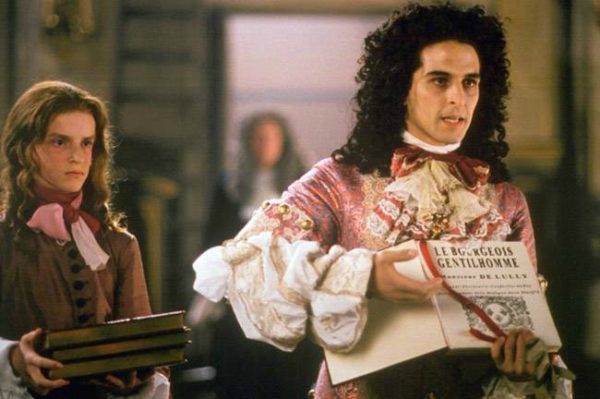 Because fuck you, Molière. 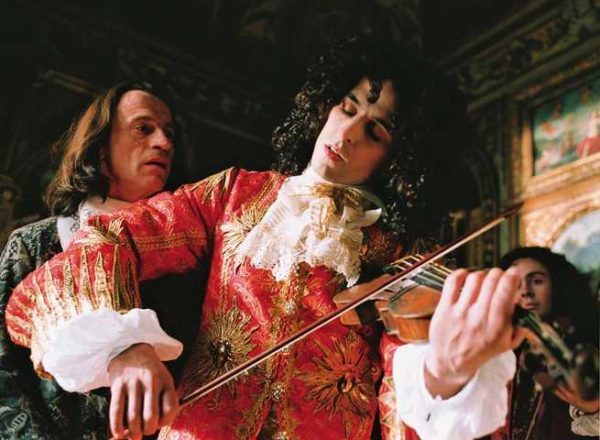 One of the more interesting suits Lully gets — Practically screams “Property of the Sun King.” 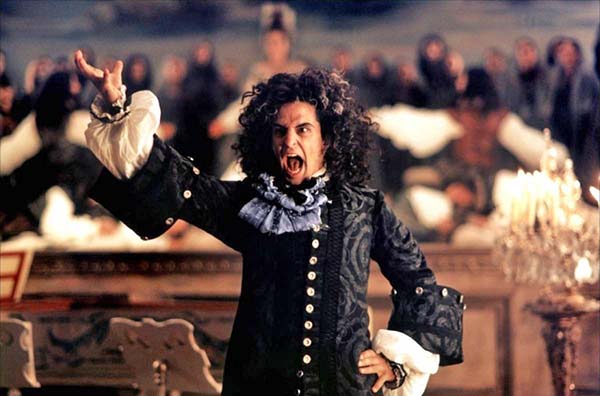 No, that upholstery material is not period. And are those … grommets … on his cuffs? 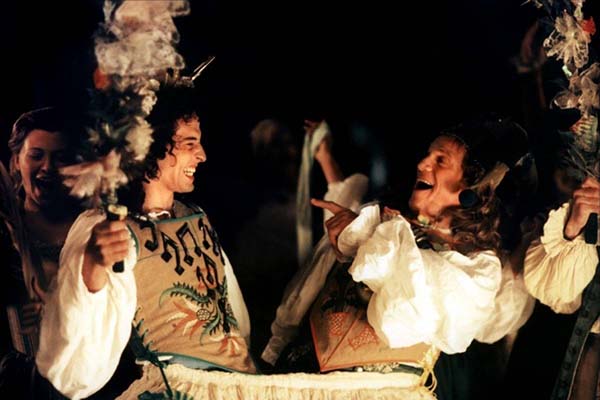 The theatrical costumes are probably the best thing about the costumes in the film overall. Here we have the marriage of Music (Lully) and Theater (Molière). 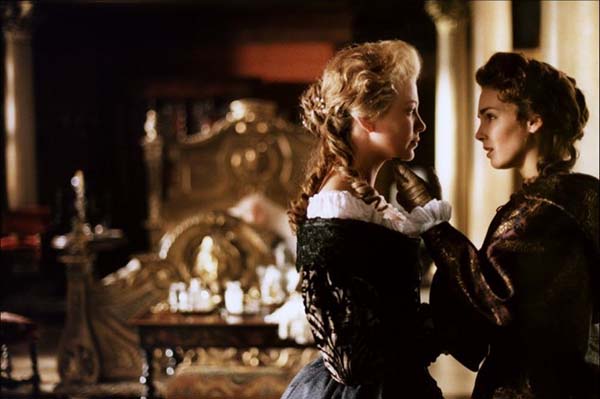 The film is largely gynophobic, so we don’t get a lot of women’s costumes to appreciate more than in passing. Here Lully’s wife shares a weirdly sensual moment with her niece, and Lully’s lover. 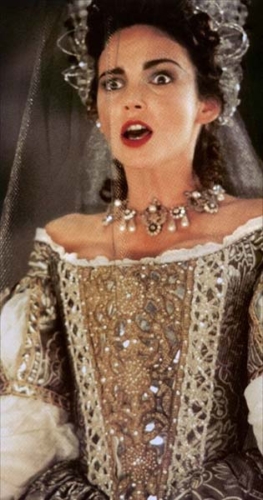 Hey, it’s shiny! Deal with it! 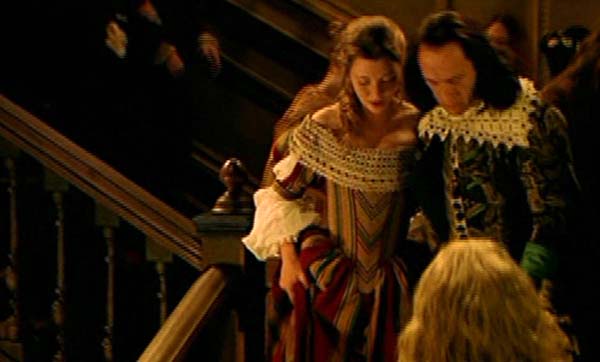 This dress is one of two that Lully’s wife gets during the entire film, spanning 20 years. 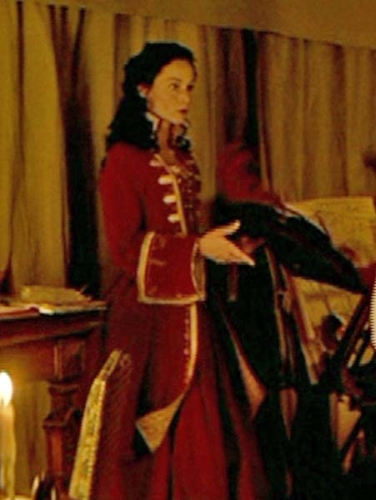 This could be an interesting outfit on one of Louis’ (unnamed) mistresses. We don’t get to find out because he literally rips it off before bench pressing her. Yes, you read that right. 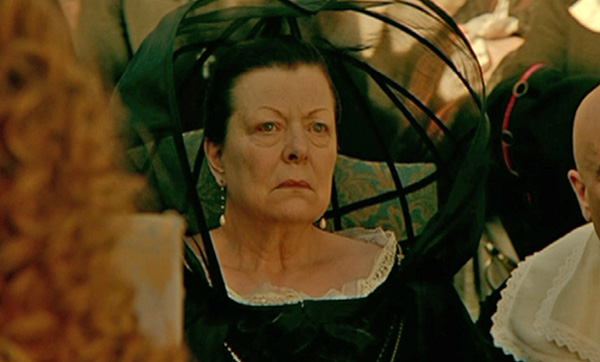 The Queen Mother is NOT amused. 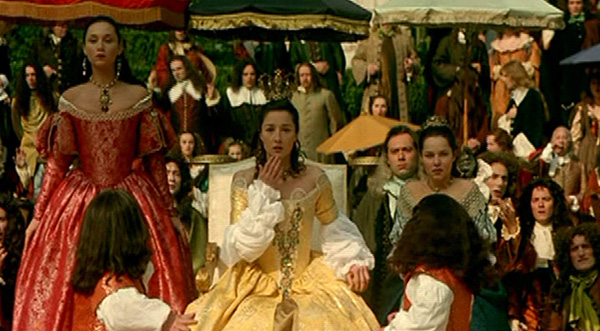 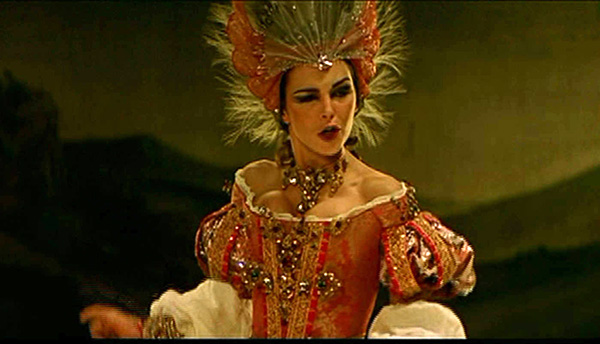 The final take? Watch it, enjoy the eye-candy, and just don’t think about it too hard. It’s better than Farinelli, if nothing else!