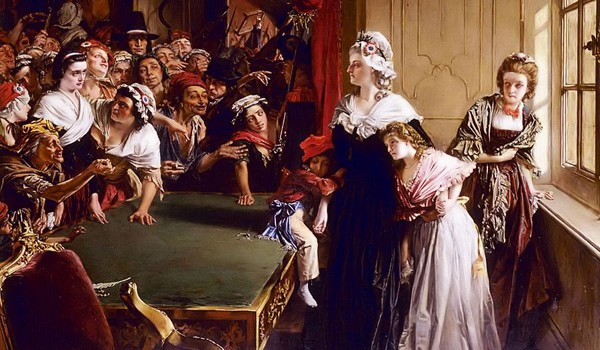 How about revisiting the French Revolution on screen this Bastille Day? We can recommend le bon, le mal, et le horrible in historical costume movies and TV on the topic. Pour yourself some champagne, and enjoy!

The French Revolution on Screen

The ultimate movie about this period in 18th-century history is the two-part La Révolution Française (1989). Detailed story, brilliant costumes, and quite a few big-name actors. You can watch the whole thing on YouTube.


Leading Up to the Revolution: Marie Antoinette Movies & TV!

She didn’t say “Let them eat cake,” but popular culture blames Marie Antoinette for the French Revolution anyway. So why not watch some different depictions of her on screen and judge for yourself? We have our ultimate guide to Queen Marie Antoinette on screen to peruse through, but we definitely recommend Sofia Coppola’s Marie Antoinette (2006) as the most evocative portrait. Check out our podcast resources after you’ve listened to our critique.

For a couple more view of Marie, in smaller but significant roles, check out The Affair of the Necklace (2001) and Jefferson in Paris (1995). Flashback to a black-and-white queen for Marie Antoinette (1938), or have a laugh with French and Saunders’ Let Them Eat Cake (1999). You can even watch them on YouTube.

And if you’re into that sort of thing, there’s all the dogs in Marie Antoinette too.

While you’re indulging in a Bastille Day film fest, keep in mind that movies and TV often screw up certain things about 18th-century costume. Watch for that back-lacing! And don’t believe the hype about crap at Versailles either.

And only if you’re bored out of your skull (or passed out from champagne!) will you want to bother with the movies Farewell, My Queen (2012) or Start the Revolution Without Me (1970). Just say farewell, and let them start without you.