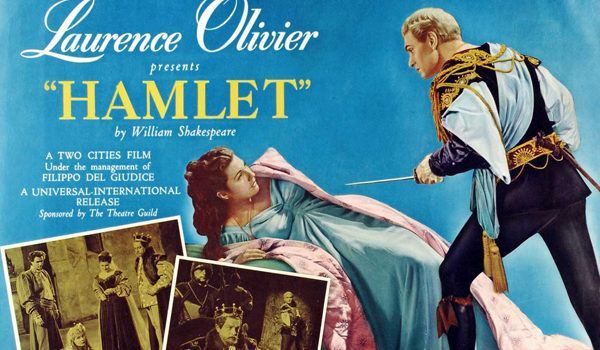 This is the biggie, the one that all the others are held up against. Laurence Olivier’s Hamlet (1948) is serious business for sure. But can we talk about it, just between you and me, for a moment? I mean, this movie is just so ARCH. It’s really kind of camp, if you give it a second look. I’m not trying to be a jerk here, because really, I’m the English Lit freak, I love super-serious films, I love ye olde fashioned Shakespeare, I love black-and-white flicks, the whole lot. But, dayum, Larry. I don’t know if your movie holds up, here in 2016. Son, stop staring into my cleavage, and just look up at my ’40s rolled hair, and hood/space-crown combo.

The settings are fabulous with big, medieval-ish castle-looking stuff going on, imposing archways and faux stone, grand staircases and the like. At first, the costumes seem to say this is set in the 16th century to go with the Bard’s language. But, whoa, that’s a very 1940s version of Tudor or Elizabethan or maybe late 15th century or whatever (Oscar-winning or not). And then there’s the hair. Hamlet and Ophelia are so very, very blond. It’s a good thing they don’t hook up in the end (spoilers!) because their kids would be practically albino pale. The hats (when they’re worn) are total fantasy mashups, kinda French hoods, kinda space alien crazy. No expense was spared to just add more crap all over the place, that’s the vibe I’m getting. The braids are because of Denmark, is that it? As Tim Gunn would say: Edit.

It’s not just the costumes, though. The performance gets pretty heavy as you go in. Very THE-A-TAH. The kind of thing that works great live, and was probably awesome circa 1948, but, whoa, it feels a bit thick today. You’re not my real dad. You’re the only one who really gets me, dead guy.

But I could be a jaded bitch. I do really love Kenneth Branagh‘s film version of Hamlet (1996), which has a less stagey vibe even though it’s nearly twice as long. What’s up with that? OK, let’s do this! Let’s talk about Laurence Olivier’s Hamlet!