In fall 2015, the BBC released a new version of Lady Chatterley’s Lover, the considered-obscene-at-the-time-of-publication (1928) story of an upper-class woman married to a disabled World War I veteran, who shags and falls in love with her gamekeeper. It stars Holliday Grainger (The Borgias) as Lady Connie Chatterley and Richard Madden (Game of Thrones) as Oliver Mellors. It’s only aired in the UK, but will no doubt come to American shores sometime in 2016.

This version pushes the action earlier to just post-WWI, and focuses much more on the class and gender role issues than the shagging. Now, I haven’t read the D.H. Lawrence book on which this is based (sorry!), and I’m sure if I had I’d have all sorts of opinions about the changes made to the story. Instead, all I can compare it to is my (admittedly vague) memories of the 1993 version starring Sean Bean, from which I mostly remember lots of shagging (I recommend it if you’re in the mood for some costume smut).

So, trying to take this production on its own terms … I generally liked it! Holliday Grainger is a talented actress, and I felt like I had a pretty good understanding of the emotions behind Connie and her husband (Sir Clifford). Gamekeeper Mellors’ motivation was a bit more opaque — he’s lower class, he’s in the war, he’s now a gamekeeper, the lady of the house wants a hug, suddenly they’re shagging in his hut. I don’t know!

The timeline was moved earlier than most adaptations go, in order to focus on the effects of World War I on Sir Clifford (and then the resulting effects on his wife Connie).

[Writer/director] Mercurio wanted to emphasise youth, as messed up by bombs and mines, rather than jaded adulthood. Accordingly, the later of two ball scenes was costumed and soundtracked for 1919, not the mid-1920s of the novel (Lady Chatterley’s Lover: Script consultant to BBC adaptation on arguing over sex scenes and dressing up in historic knickers).

I did feel like they went a bit heavy-handed on the gender-role-thing, particularly when Sir Clifford tells Lady Chatterley that he “ought to be a figure of potency” for her (ugh). Yes, that’s definitely what is going on in his world, but putting it that way just makes me want to retch quietly in the corner.

And finally, apparently there are two drafts of the novel’s ending, and this one goes VERY hopeful. Except, while I’m very much for egalitarianism, I can’t help thinking that Connie and Oliver are going to have a difficult life. For one thing, she’s going to expect a certain standard of living that he can’t provide based on his work experience as a miner, soldier, and gamekeeper. For another, I can’t imagine that either the upper OR lower classes will accept them together, so I doubt they’ll have many friends. Oh well, I guess that’s another novel?

The fact that this production came from the BBC is probably a factor as to why the costume designer went for realism. That, and the World War I tie-in — the 100th anniversary of World War I was a HUGE deal in the UK. Sadly most of the press around the film dealt with its smuttiness and accuracy (or lack thereof) to the novel, so I don’t have much information on what costume designer Sarah Arthur was going for. I can tell you that this appears to be her first period piece.

Overall, I’d say the themes here are “verisimilitude” and “winter” (of the spirit/soul?). Everyone looks very real — Connie’s daywear is frequently opulent, but it’s also very functional, and she’s often seen being active, either riding or walking in the woods. The one hitch is that I’d say her wardrobe is more 1914-15 than 1918-19, while her hair has touches of the 1920s. The “winter” theme is, I believe, a way of showing Connie’s emotions as her husband has withdrawn emotionally from her due to his war experiences and his disability. She does wear color — dark browns, rust, dull blues — but she’s always wearing a cold winter beige color (usually a blouse) as well. Frigid (no, not sexually!), anyone?

Let’s get the boys out of the way first:

“Do I smell of the earth and dead rabbits, lass?”

Post-War, he continues to be dapper, but is more 1) covered up (showing his emotional barriers?) and 2) earthy:

LOVELY colors! It’s the autumn of his emotional life, I guess?

We only get two scenes of Connie pre-War:

In a gorgeous beaded black dress, with touches of red, at the party at which she meets Sir Clifford.

And, at their wedding.

The wedding dress and accessories were GORGEOUS. According to the costume shop that restored it, “This was an original period wedding dress of the time, which had pretty much rotted away on the inside, so we basically took it all apart and very delicately and painstakingly slowly re-made it!” (Sara Fay Tailoring).

The lace! The beading! Then post-War — here’s where Connie’s wardrobe sticks to pre-War styles. I’m not saying they’re totally wrong, or that it doesn’t make sense that a well-to-do lady living in a rural area wouldn’t wear her clothes for more than a season or be slightly behind the times. It’s just that there isn’t much difference from her pre-War wardrobe, and they don’t quite catch any of the almost-1920s trends of 1918-19.

Compare some images of 1914 fashions: 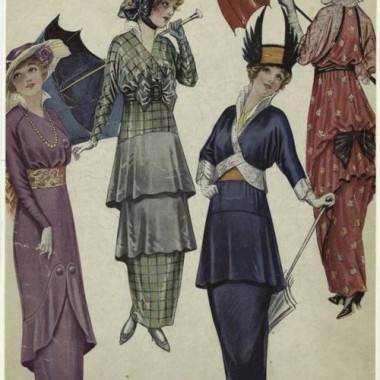 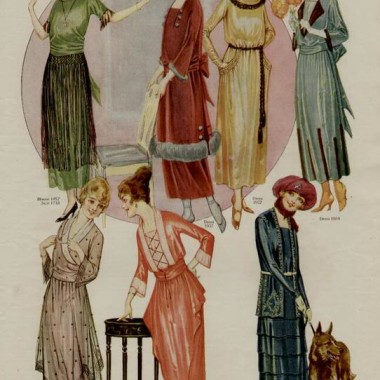 Now let’s look at Connie’s wardrobe, and see what the hell I’m talking about!

Connie’s sober suit is worn when her husband returns from the war, and for other with-husband activities. I think it’s a bit armor-like.

Her riding habit is in blue flecked wool with split skirt and PANTS (SO fab), and again with a beige-y white blouse: Black trim, buttons on the pants.

She wears this nightgown and bed jacket while she’s still trying to make a go of things with Clifford:

Lovely, lacey, and delicate, and I liked the high waistline.

She first speaks to Mellors in a similar outfit to the first suit, although with a shawl, giving her a softer look:

This is what she’s wearing underneath:

Lace blouse with a high neckline.

Then when she and Mellors really start to connect, she adds to her dull, dark blue and beige with some floral/greenery appliques — she’s starting to bud?

I THINK this is applique, not embroidery.

Love how it crosses over her shoulder to the back. Note the high slit for walking.

And under everything, winter-y, pale, beige-y/white blouses with lots of gorgeous details:

This is what’s under her riding habit.

As Connie and Mellors’s relationship deepens (ahem), she starts introducing brown into her wardrobe while with her husband:

But wears this all beige-y white number with Mellors — here it reads to me less as emotionally frigid as early spring, beginning to thaw:

This dress seems to be her “trying to be emotionally sophisticated about having an affair” outfit:

It’s more like evening wear, but maybe that’s part of the “trying to be sophisticated” thing?

Then there’s what I take to be her most emotional outfit, a rust ensemble with a beautiful, multi-color lace applique:

SO much that’s interesting in this outfit! First, notice the asymmetrical ribbon applique — obviously. But also, notice how the underskirt and cuff fabric has a windowpane print on it.

Then under that window pane layer, there’s a lighter, shot silk underskirt.

And when she runs in it, it becomes clear that that shot silk underskirt is only a drape in front and doesn’t extend to the back.

And then there’s her running-off-with-Mellors look:

Mostly it’s a big fur coat, but the warm brown ties in with Mellors’s clothes and keeps with my “warm emotionally” idea.

Now, compare all those images to the fashion plates above, and you can wonder with me where are the lower, looser waistlines; fuller skirts; and higher hemlines of 1919!

In addition to her meeting-Sir-Clifford pre-War dress, there are two evening scenes. In the first, Connie is in the midst of her “I can hang! I’m sophisticated!” stage of thinking she can remain married to Sir Clifford and shag Mellors.

Velvet with rhinestones, and relatively covered up.

Notice how the beading goes onto the back.

Then there’s the “it’s all crashing down around me” evening dress:

Connie is much more exposed in this sleeveless lace and beaded number. I wish I could see more! I love the geometrical look to the beaded portion.

Now let’s talk a bit about hair and accessories. I LOVED how they added many different small touches that added a lot of realism to Connie’s wardrobe.

Constantly lovely jewelry, including this gold bar pin below her throat.

And I loved the decorative gold hairpin keeping her at-the-ear curl in place. Note the light hand with makeup!

GORGEOUS bandeau. I wonder if it’s metal or fabric?

I like how just one portion of this pearl choker is twisted.

This is Connie’s sister, pre-War. I love the black feather spray in her hair.

There are a LOT of great hat trimmings:

Lots of amazing velvet and silk flowers and feather sprays.

Hair-wise, I thought they did a GREAT job with Connie’s updos. They were appropriate to the period, they were pretty, and she ALWAYS wore her hair up whenever there was company. What confused me, however, was that sometime in 1918-19, they cut her hair into a long bob. They still styled it up for anything other than Connie-on-her-own time, but this seemed AWFULLY fashion-forward for an aristocratic woman whose husband seems pretty conservative, and who hasn’t bothered to update her wardrobe in the past few years.

…except occasionally during alone time. But. SO fashion-forward. Also, she looks 1950s here with her perfect curls and that hat.

I LOVED this frizzy party style.

A great example of a late teens/early 1920s hairstyle that you don’t see reproduced very often. It’s not a happy movie, nor is it terribly steamy. But it is melancholy, well-acted, and the costumes — while not cutting-edge fashionable — are beautifully designed and made. Keep an eye out — we’ll update you Americans as to when this will air over on our side of the pond!