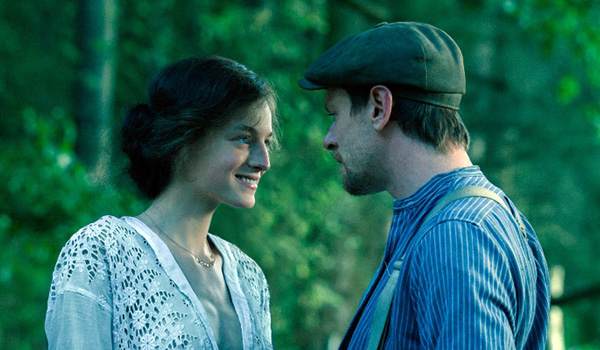 Netflix has a new version of a classic frock flick novel out, and they didn’t fuck it up quite as much this year’s Persuasion. The 2022 edition of Lady Chatterley’s Lover actually uses some of D. H. Lawrence’s prose and doesn’t overly modernize the whole thing. Oh there’s some modern fashions that are slipped in, and I’ll get to that. But the whole package isn’t as criminally “updated” as it could have been, and I’m thankful for that small mercy.

Now, I did read the book, and being the literary nerd here, I pulled out my copy that’s till highlighted and dog-eared from college (guessing I wrote a paper on it then). So that’s where I confirmed the language was mostly correct, such as some of the letters that serve as voiceover in the movie. But there are a few changes both to fit the novel into a two-hour movie and, I suppose, to make the story simpler.

Constance Reid (Emma Corrin) marries Sir Clifford Chatterley (Matthew Duckett) towards the end of World War I. He’s on leave from the front and returns after their wedding night, but he comes home injured and paralyzed from the waist down. Six months after the end of the war, Constance and Clifford move to his family’s country home, Wragby Hall, as his father has died and Clifford has inherited the house and title. Thus the majority of the story takes place in 1919 — which isn’t much different from the book, where they’re married in 1917, he’s injured and spends two years in the hospital, and they move into Wragby Hall in 1920.

The bigger changes, IMO, are to some of the characters. Clifford becomes more of a cartoon villain, and Oliver Mellors (Jack O’Connell), the gamekeeper Constance has an affair with, is even more of a vague cipher than in the book. Both men are sharp extremes that she ping-pongs between — arrogant, crippled, upper-class jerk or strong, silent, sexy lower-class mystery man. Not that Constance herself is drawn with particular subtlety either. She wanders into her marriage without much thought and then wanders out of it and into Mellors’ arms with the same casual carelessness. While there is some of the interior dialog via letter-reading in this production, a lot of the character motivations of the novel are lost here other than “Connie wants to get laid.” Also, Mrs. Bolton (Joely Richardson) is rather rewritten, which surprised me.

So how about the costumes? Well, they aren’t as beautiful or historically accurate as the BBC’s 2015 production, which Kendra raved about. The designer is Emma Fryer, who designed the first season of The Great. She’s done a lot of press for Lady Chatterley and the big takeaway is that she wanted to modernize the clothing — insert gagging sounds here. She told Women’s Wear Daily:

“I thought if Connie were here in 2022, what would she look like? What would be in her wardrobe? Where would she go shopping?”

“There are three evening events at the country estate [in the film], and what’s interesting is that Connie’s almost the only female at all of them. So she really had to stand away and look elegant and chic and beautifully glamorous. We’re seeing her less covered and a little vulnerable but also looking amazing.” 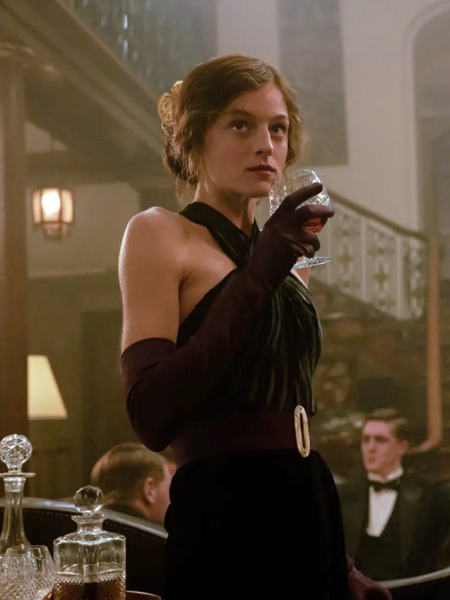 IDK, it just looks modern or, maybe if I squint, 1930s. Photo by Parisa Taghizadeh/Netflix.

There are at least a couple period costumes rented from the usual costume houses. One recycled costume is this embroidered green gown Connie wears towards the end of the movie. In Vogue, Fryer said:

“When we went to Venice, we just completely changed the color palettes for Emma’s character. “Up until that point we see Lady Chatterley in a lot of greens, which I think just came out of the greens of the countryside. I just wanted her to pop a bit when we went to Venice.” 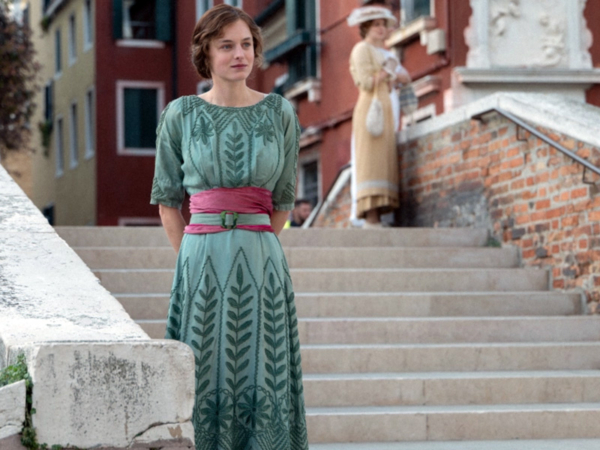 Even watching the trailer, I was thinking I’d seen this red dress before but it’s not the same as the one in Tolkien (2019), nor was it in the remake of Howards End (2017). Nice though, and one of the few times she wears a hat (I think she has three hats in total). 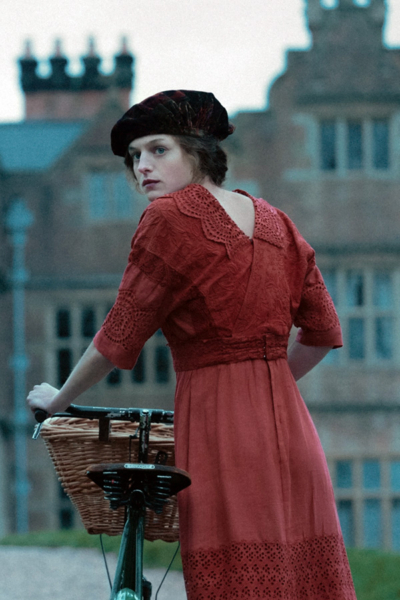 There’s a lot of blouse-and-skirt stuff that is conceptually fine, even if the execution leaves something to be desired from a historical standpoint. 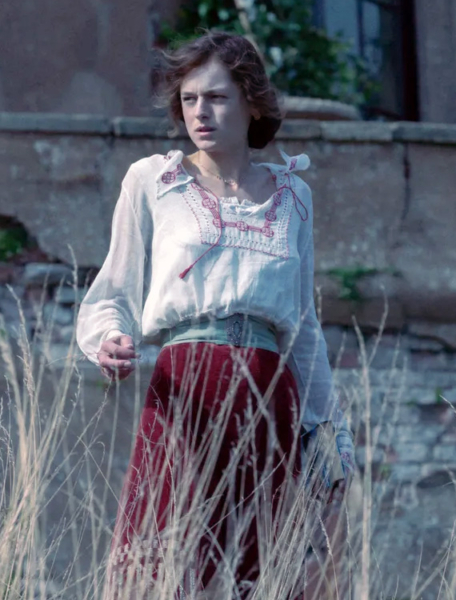 In Vogue, Fryer says her inspiration here was fully modern:

“The skirt against the backdrop of the house is just a great color. That blouse you could wear today with a pair of jeans, and it would just look great. I always had in my head, when it came to Connie, the sense of someone at Glastonbury Festival. I don’t know if you’ve ever seen that image of Kate Moss at Glastonbury Festival, in almost like Wellington boots. You’re mixing the right things and wrong things — but you still look great.” 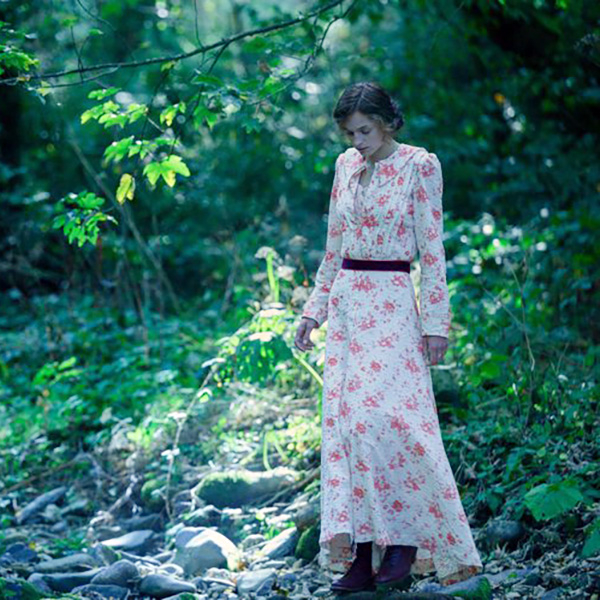 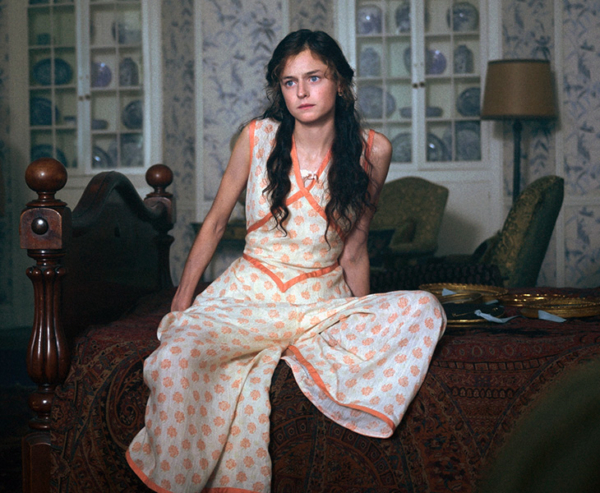 No idea. Don’t ask me. The first one is almost bearable, but I think the jumpsuit thing is hideous as modern fashion, much the less as something pretending to be late 1910s fashion.

Of course, since this is a flick about sex, Connie gets her kit off, with an obligatory turn from “heavyweight” fabrics to “floaty, sheer fabrics” according to the costume designer. Whatever. There are plenty of explicit sex scenes so you don’t have to look at ugly clothes like that, but you are subjected to frightfully bony bodies, which are also apparently fashionable.

I can’t say I really enjoyed this movie — it was a quickie version of the novel, focusing a lot on the sex, not much on the characters, and the costumes were either boring or ugly. But I managed to watch the whole thing, and I didn’t hate it, which is something of a step up. I might have to rewatch the 1993 miniseries with Sean Bean and Joely Richardson (I see what they did there), which I remember being both sexy and more interesting in terms of characters and costumes.

Will you bother with this Lady Chatterley’s Lover?