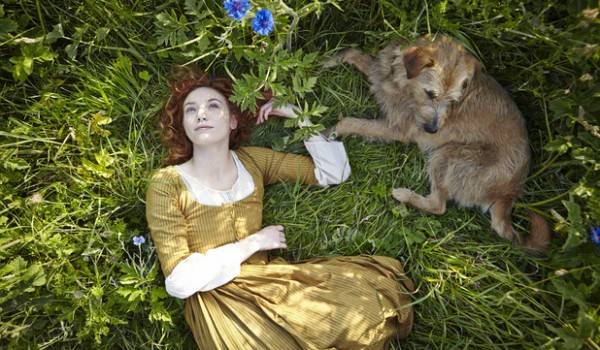 It’s time for our last installment of our detailed analysis of Poldark 2015’s costumes! Previously we discussed the upper-class ladies, then the older generation. Today, we’re going to focus on the middling sorts — Demelza, Keren, and Margaret. What are they wearing? Does it work cinematically? How historically accurate are they?

Now, before you go getting stressed out, YES I know that Demelza ends up light years above Keren and Margaret in terms of class. She’s just barely downhill from Elizabeth, in fact. However, I wanted to leave her til last so as to avoid any spoilers in terms of her story, and given that she’s not quite as upper-class as Elizabeth, it made sense to include her here. Also, as you’ll see below, she tends to straddle the line, costume-wise, between the gentry and the working-class women.

If you’re interested in hairstyles, don’t forget to check out the two posts I’ve done on those!

All three of today’s ladies start off somewhere on the lower end of the class spectrum, and two out of three climb up nearly as high as the upper-class ladies. We looked in-depth at upper-class fashion previously, but let’s now add to that with some analysis of the middle classes. Below is a compilation of images showing lower-middle to middle-class ladies. It’s not comprehensive, but it at least gives us a reference point for what a real woman would have worn in the 1780s. 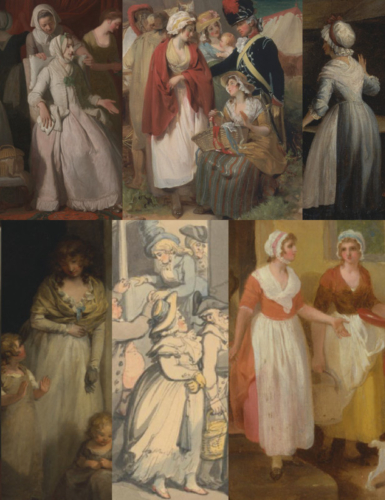 Demelza starts off as a ragamuffin, then becomes Ross’s servant, and then Ross’s wife. It takes her some time to be comfortable with just being clean, and even after she’s lady of Nampara, she still prefers to keep it simple in plain dresses and jackets in earth tones.

Keren, on the other hand, starts off as an actress, then marries a copper miner. She’s very much on the low end of respectable.

However, note how alike the two women dress — both in simple jackets much of the time. In fact, Keren is the fancier of the two, with her cotton-print skirt! Indian prints like these were very fashionable, and such a fabric could have been imported from India or made in Europe.

I particularly like Demelza’s green jacket, as it seems to presage the styles coming in the 1790s — although I’ve never seen anything like that across-the-back lacing.

Demelza also has a range of what appear to be round gowns (the simpler of the dress options in the 1780s). She has at least two each in mustard and dark mauve. I could only find a back shot of one of these, and it shows the center-back-without-waist-seam style, a slightly more traditional/less cutting-edge style. She almost always is wearing long-sleeved shifts (aka chemises), which extend past her dress sleeves, and her shift neckline pulled up past her dress neckline. Both make her look very practical. 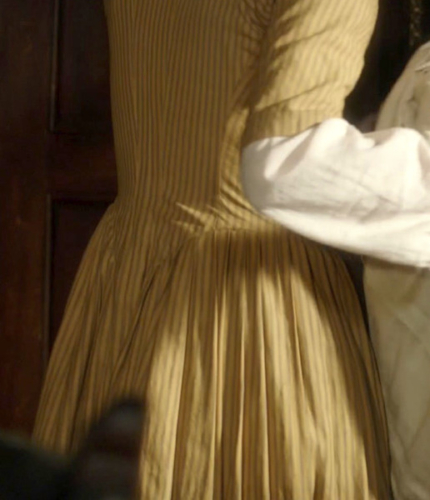 On the tarty side of things, here’s what Keren looks like when we first meet her. I would say that this is a theater costume, except it’s not what she’s wearing when she’s actually on stage. I like that you can tell that it’s an OLD dress, and the silk is starting to split and tear. 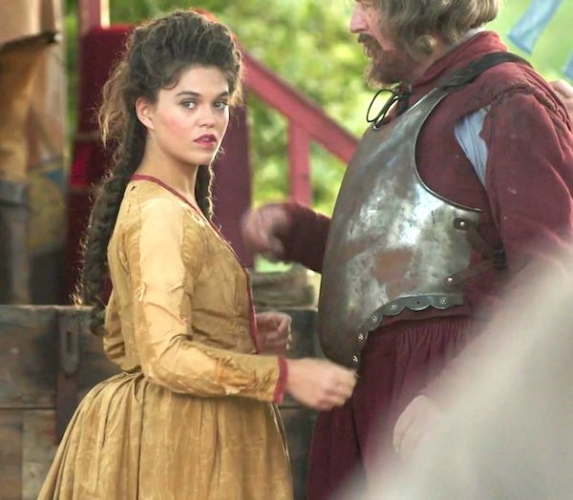 Getting even tartier, here’s Margaret in the first few episodes. Dark, wine red seems to be her color. She’s got a very faded cotton-print dress with a bit of dark red trim along the center front and neckline (and matching petticoat), with a teeny frill at the elbow. Then later, she’s shown in an untrimmed, dark red, silk taffeta gown.

It’s interesting that, minus Demelza’s green, all three ladies seem to be in coordinating colors — mustard yellow and various shades of dark red.

Thankfully for the snooze-factor, both Demelza and Margaret climb UP UP UP the social ladder. That being said…

Demelza literally starts off so raggy that we think she’s a boy. As her station improves she’s dressed serviceably in the plain gowns and jackets seen above. Then, finally, it’s Christmas, and she’s off to visit the fancy branch of the Poldark family. She’s nervous. There’s build up. Then the big reveal… 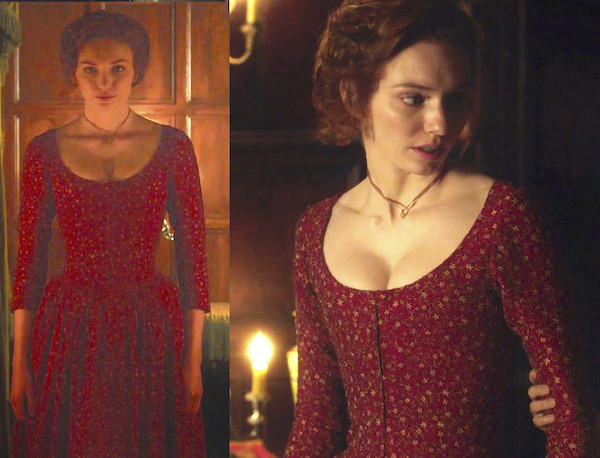 But luckily, there’s a BALL to dress up for, right? True to form, Demelza sticks with the mustard yellow (a color she looks great in, by the way), classing it up in silk satin. Silk satin is a very tricky fabric to fit well, and unfortunately the fit on the bodice isn’t quite up to snuff. On the other hand, it’s a pretty dress, and it’s probably Demelza’s nicest fabric! Let us note, however, that she’s in a very historically-inaccurate back-lacing dress. 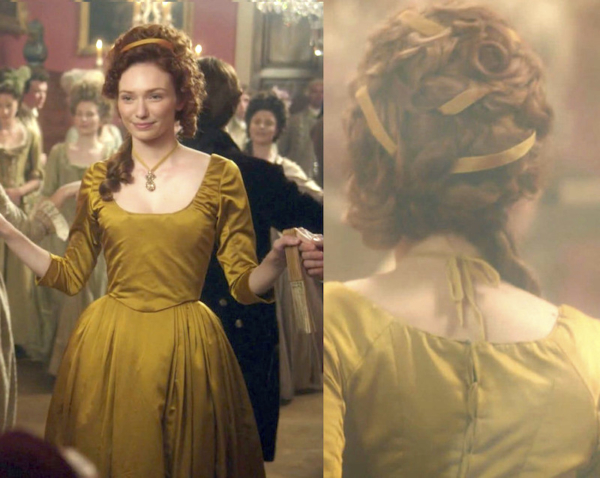 I feel a little bit bad, because apparently the costume maker for these dresses sweated over the small stuff, like hand-bound eyelets:

The designer was very adamant that all the finishings and edging, eyelets for things that were laced up and piped bits around the necklines, anything you might see on close-ups, was done by hand. That meant an awful lot of hand-stitching, which was very time consuming, but the attention to detail and authenticity was quite paramount. I made beautiful Poldark dresses in my Wirral spare room

THANKFULLY, we’ve got Margaret sweet-talking and shagging her way up the social spectrum. I’m telling you, EIGHT episodes (hey, I just realized that the US version only has 7! Clearly there has been editing going on, and the Americans are getting ripped off!). Anyway, SEVEN episodes and there wasn’t ONE outfit that got me excited until the Festivus Miracle that was Margaret’s silver outfit in episode 7.

PEOPLE, I ACTUALLY HIT PAUSE AND REWIND AND THEN SLO-MO’ED IT SO I COULD SEE THIS. IT’S SHINY. IT’S STRIPEY. IT’S GOT MULTIPLE COLLARS. THE POWDERED HAIR. THAT HAT.

(Oh, and earlier Margaret wore another dark red dress, this one with lots of trim, showing her ascent up the class ladder. Whatever. LOOK AT THE SILVER OUTFIT). 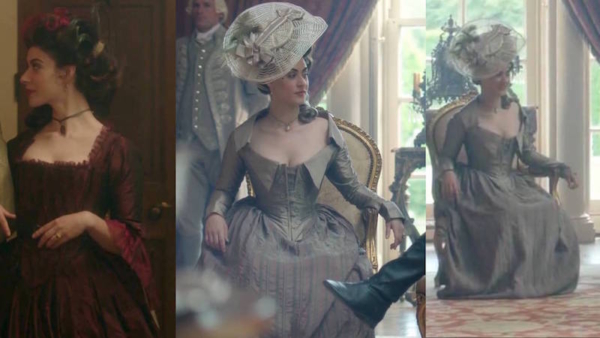 Okay, focus, Kendra. Sorry. That red dress is notable for all of its trim on the stomacher, PLUS the ruffled organza around the neckline PLUS elbow ruffles. The collars on that silver dress make it a redingote, which doesn’t just have to be the practical versions we’ve seen on Elizabeth — they may have started as a menswear-inspired style, but they definitely got shiny and impractical really quickly.

There’s only one time in this entire series when we see any woman in her stays (aka corset) — that’s Demelza, when she’s dressing for Christmas. She seems to be wearing the classic cone-shape stays appropriate to the 18th century, although it seems kind of cheesy that they went for the stereotypical “Scarlett O’Hara having her corset over-tightened while hanging on to the bed post” thing. For one, 18th-century stays were much more about giving you the right shape, not about trying to suck you in 10″. For another, Demelza really doesn’t have much padding — you’re not going to be ABLE to make her much smaller. 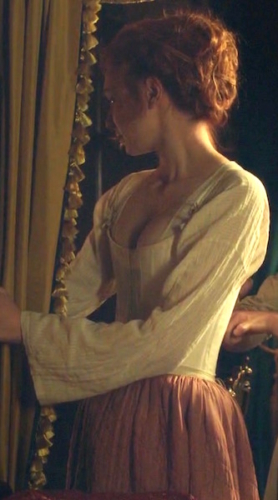 One of Demelza’s first big purchases (well, Ross buys it for her), and first garment to really make her even slightly respectable, is her cloak. Ross trots her off to town and buys her this printed cotton cloak with a hood and wide ruched trim: 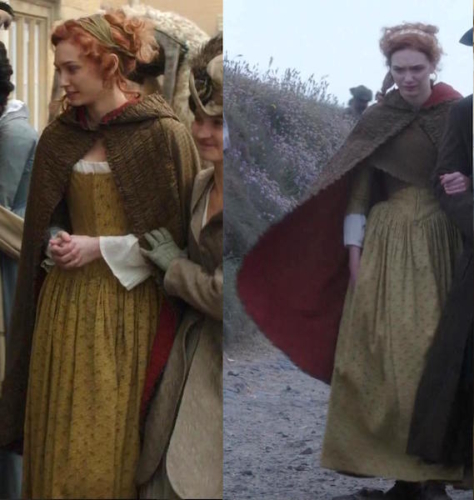 What’s great is that this cloak is a dead ringer for surviving 18th-century cloaks worn in Provence: 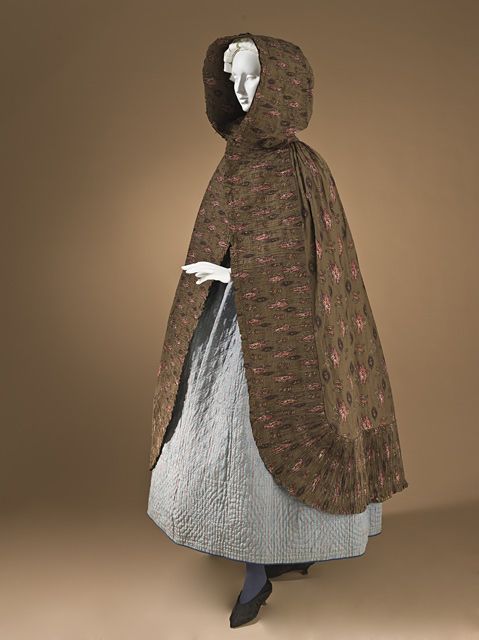 The problem? IT’S MADE OF COTTON. Yeah. Ever been to Provence? It doesn’t get that cold there. Cornwall is known for being a warmer area of England, but it’s not the south of France. What would have been a better choice? Oh I don’t know, maybe something in WOOL? 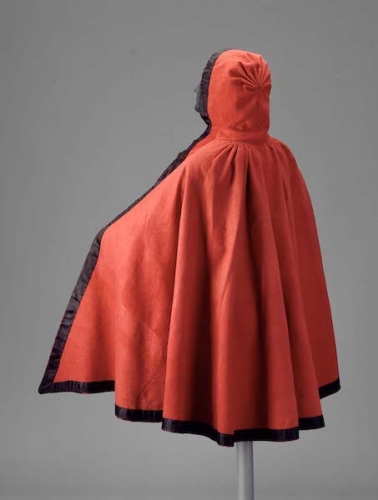 As the story progresses, Demelza upgrades to some slightly more practical outerwear-type jackets. At first, I thought these were the same garment, as they’re all in the same neutral color. But then I realized one had a hood, and the other looks like it’s from a quilted fabric. Both call to mind the polonaise/Brunswick jacket that Verity wears.

Poldark‘s Headwear for the Middling Class

Demelza REALLY doesn’t get much in the way of headwear, being the lead and all. There’s only ONE time she wears a hat, while at the traveling theater performance. It’s a flat, bergere (shepherdess) style that was popular in the middle of the century. She plops it right on top of her head, in a very country-bumpkin way.

Thankfully, we can look again at Margaret’s one and only hat, which she wears with the silver redingote discussed above. It’s GORGEOUS. It’s clearly made of sheer fabric on a wire frame, which was very popular in the 1780s.

Margaret’s hat reminds me a lot of this portrait from 1785: 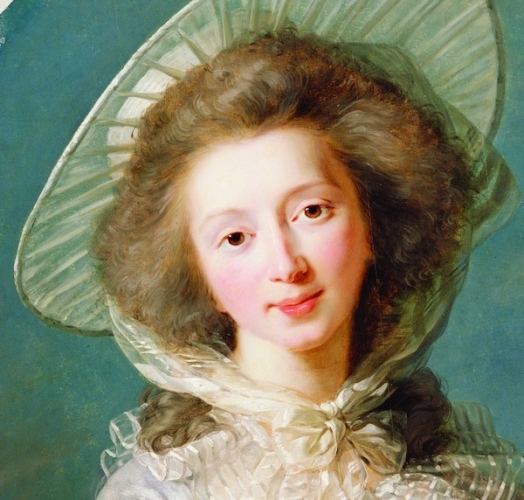 Let’s enjoy it one last time, shall we? Apparently there’s an heiress coming in season 2, and I just pray that she gets a wardrobe along these lines. Because otherwise I’m going to be watching with half-open eyes. 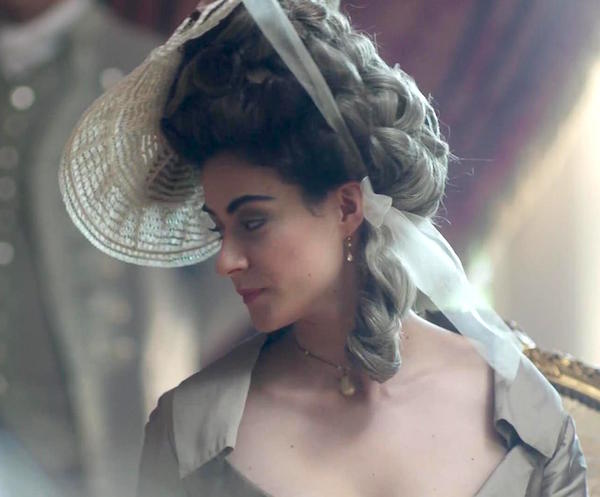 What did you think of Demelza, Keren, and Margaret’s costumes? What are you hoping for in season 2 of Poldark?