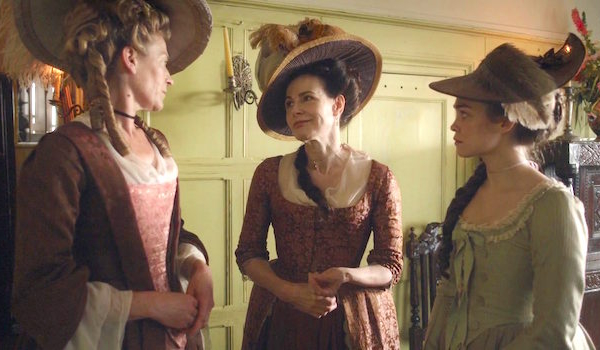 Let’s get back to our in-depth analysis of Poldark 2015’s costumes, shall we? I’ve previously blogged about the upper-class ladies (Elizabeth, Verity, and Ruth), as well as the hairstyles in general. Make sure you’ve read that post about the upper-class ladies before you read this one, as I’m going to refer to the information posted there a bit! Now, I’d like to briefly look at the older generation — Ross Poldark’s Aunt Agatha, Elizabeth’s mother Mrs. Chynoweth, and Ruth’s mother Mrs. Teague. Oh, and I’m also going to talk about that dress that was owned by Ross’s mother…

Spoiler warning: I’m NOT going to give away any plot points, but I WILL be showing outfits from episodes that might not have aired yet in America. So, if you prefer to be surprised by new outfits, then I’d suggest waiting to read this post until after the series finishes.

Did Older Ladies Dress Differently in the 18th Century?

The short answer: They certainly could! Some ladies clearly preferred to wear dress, hair, and/or accessory styles that were 10 to 20 years out of date. Others dressed more fashionably (although we should note that if you’re having your portrait painted, you’re probably more likely to dress fashionably than everyday).

In the upper-class ladies post, I went over the basics (and many of the variations) of fashionable attire in the 1780s. The fitted “nightgown” was the most au-courant style. Let’s look at some English paintings of the 1780s featuring older ladies to see if we can identify any differences.

Here are a few individual portraits of older ladies. Offhand, I’d say that Mrs. Peter de Lancey (center image) looks about 10 years out of date for her portrait, but the other two look relatively au-courant:

What is even more helpful is to look at family portraits, because then you can compare the ladies of different ages/generations. First, we have the Foudrinier Family, c. 1786. The red arrow points to the lady that I think is the mother, given the fact that she’s in the center of the picture next to a man of the same age (the only other possibility is the lady on the far right, but she’s not paired with any man and is more likely a daughter). Comparing the probably Mrs. Foudrinier with her daughter (far right, in brown), the two are dressed very similarly. Both are wearing closed-front, fitted-bodice gowns with lots of ruffly, gauzy accessories. Both of them have hair that is a similar shape, powdered, and with a similarly ruffled cap on top. Verdict: Older lady looks very current. I’m going to try to be more succinct from here on out: in the Spreull Family (c. 1793), grandmother wears elbow-length sleeves that are definitely out of fashion, plus the double cap (white and black) tied under the chin (over small hair) fashionable in the 1750s to mid-1760s. Meanwhile, the mother (pink dress) is wearing fashionable long sleeves, plus interestingly cropped-on-top, long-in-back hair that’s very 1790s (look how much it resembles that worn by the eldest daughter, in the blue sash). Verdict: Older lady looks dated. Two older ladies (red arrows) in the Sharp family (1779-81) look very similar to the other ladies in the painting (the only outlier is the very youngest girl, in white and pink on the left). Verdict: Older ladies look current. The eldest lady (red arrow) has sleeves that are the same length as the other ladies, but with slightly dated elbow ruffles instead of gathered cuffs (see the center lady in blue). Her hair and cap are fashionable of the 1750s to early 1760s and very different from those worn by the other ladies. She’s quite possibly wearing a sack gown instead of a closed-front, fitted nightgown, but its hard to tell. Verdict: Older lady looks dated. So now let’s get back to Poldark, shall we, and compare the older generation ladies with the younger ones seen in part 1 of this series to see if we spot any differences.

Mrs. Chynoweth (with the dark hair in the images below) is Elizabeth’s mother. She’s clearly well-off and from an established family. Mrs. Teague (with the lighter hair) is Ruth’s mother; she seems to have money but not be quite of the same echelon as Mrs. Chynoweth.

Looking at the dresses worn by both middle-aged ladies, they both wear the closed-front, fitted-bodice nightgowns worn by their daughters. Mrs. Chynoweth has one nightgown in a patterned silk that’s very similar (in terms of pattern) to Elizabeth’s. Her other gown has a lot of ruched trim on the bodice (more so than most of the other gowns worn in the series — a nod to her more established status?). What’s interesting to me is that both Mrs. Chynoweth and Mrs. Teague also wear stomacher gowns (probably the slightly-earlier stomacher nightgowns of the 1740s to ’70s discussed here; none of their dresses seem to have the back fullness that would indicate a sack gown). So they’re not massively out of date, just wearing the 18th-century equivalent of mom jeans. Also note all three dresses are in patterned silks.

Finally, Mrs. Teague wears a redingote with an au-courant cutaway () front opening and matching waistcoat. This is as à la mode as anything the younger ladies are wearing. And now, let’s sidestep into talking about That Dress. The one that made you groan when you watched the Ross-and-Demelza-hookup episode. Why? Well, supposedly the dress belonged to Ross’s mother. I say “supposedly” because I think they got this from Colonial Williamsburg circa 1932. Okay, so the dress has a (inaccurately sewn-in) stomacher front…

It’s like someone wanted to make a sack gown (aka robe à la française), but didn’t have enough fabric, but they made the dress anyway, but then an intern popped by and said “Remember the dress has to lace in back so that Ross is forced to cop a feel!” and the costumer said “what the WHAT?” and looked at the clock and they only had 15 minutes so they grabbed some prefab eyelet tape they had set aside for grandma’s curtains and hot-glued it in there. Phew. Here’s what this style SHOULD look like in back: What I would really like to know is: If Demelza needed Ross to unlace her to get out of the dress, HOW THE HELL DID SHE GET INTO IT ALL ON HER OWN???

Aunt Agatha is of course about 20 years older than Mrs. Chynoweth and Mrs. Teague. She is very committed to her black wardrobe. Sadly, the clearest image I have of any of her dresses is the still below, which tells us that she is wearing a stomacher-fronted (somewhat- to slightly dated) style gown, but you never really see the back. (I got lots of screencaps of her, some of which you’ll see below, but she’s always just a mass of black). My gut feeling is that she’s wearing a sack gown just based on the slightly loose fit, but either way, she found her look about 20 to 30 years ago. and she’s sticking with it. So, in terms of dress, we’ve got Mrs. Chynoweth and Mrs. Teague in slightly dated fashions, and Aunt Agatha much more firmly 10 to 20 years out of date. This rings very true compared to the original 18th-century paintings examined above!

Both Mrs. Chynoweth and Mrs. Teague get some decent hats. My theory is that this has less to do with their age, and more to do with their status as secondary characters. There are a good number of hats in the series, they’re just hardly ever worn by the principal characters! Aunt Agatha also gets some headwear, but her’s definitely mark her as out-of-date. She’s always in black caps with white lace, which as we mentioned in our podcast, were a style of headwear that was very fashionable up through the 1750s. So, she’s found her look and is sticking with it.

She also wears a “calash,” which you see below on the right. This was a style of hat that basically looks like a covered wagon for your head — it stands up high around the face because it has rows of cane (or some other structure) in it. It’s meant to protect the wearer from the elements but not muss the hair (genius, really, even if it looks crazy as all hell). Aunt Agatha is the only one ever shown in this (really weird to modern eyes) style, which again marks her as old and out-of-date. And just plain kooky!

One slight difference from the younger ladies is that our middle-aged ladies (Mrs. Chynoweth and Mrs. Teague) wear elbow ruffles, a viable style but not quite cutting-edge. It’s a look that’s more usually worn with the (still worn, but only for really formal occasions) sack gown.

Aunt Agatha continues her black-on-black look with the addition of mitts (long fingerless gloves), as well as black neckerchiefs. This helps to make her look different from all the other characters, and furthers her look of “elderly lady wearing 20 shawls” (without the literal 20 shawls). What did you think of Poldark‘s older generation? Stay tuned for part 3, in which we look at the middling status ladies (Demelza, Margaret, and Keren).