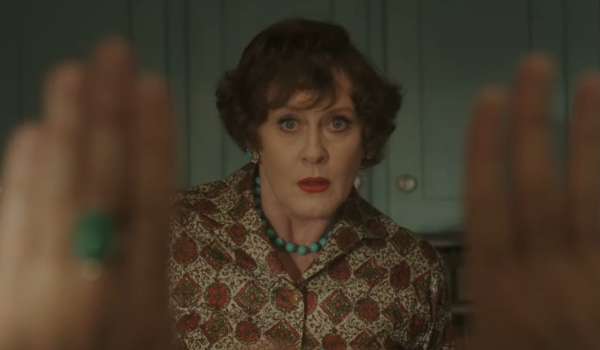 Now that I’ve finished season one of Julia (2022-) I’m ready to talk about it! Who else has binged the series and not felt an overwhelming need to make coq au vin? Who else suddenly got obsessed with perfecting the perfect French omelette? Sweetbreads, anyone? SOMEONE PAINT MY BODY IN BUTTER.

Honestly, what I want to talk about isn’t really the costumes (though they are very good), or the food (omg the food), but something that comes up occasionally on this blog, and something we ourselves have wildly differing and often capriciously fluctuating opinions on: What duty does a showrunner or filmmaker have to the actual history versus the “story” that is created decades or centuries after the fact and is consumed for entertainment purposes?

(Note: Since this post contains A LOT of spoilers, I very kindly put it behind a cut for those of you who want to be spared until you’ve watched the series.) 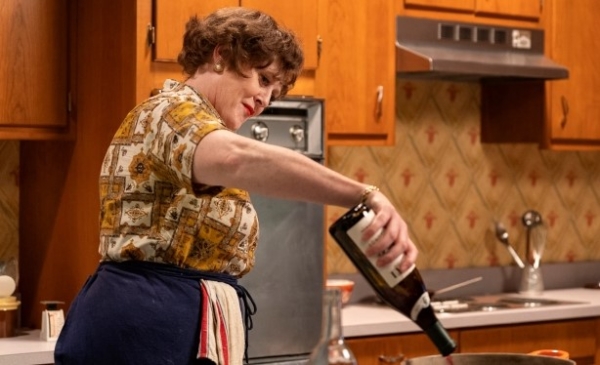 And just in case the cut doesn’t work, here’s a photo of Sarah Lancashire as Julia Child, warning you not to scroll past this point if you don’t want spoilers!

As I watched Julia, I found myself looking up various things in the show, either plot points that stuck out in weird ways or characters that came across more as caricatures than believable people. Did editor Judith Jones really march into Blanche Knopf’s office and demand that her incredibly influential boss effectively allow her to throw her career away to edit a cookbook? (Answer: Most certainly not.) Was producer Alice Naman based on a real person? (Answer: Sort of. Alice is based on several different influential female producers in public television, both Black and white, but French Chef producer Ruth Lockwood is most often mentioned as the main inspiration for the character, though she was white). Did Julia Child have a same-sex experimental phase at her all-girls’ college with a woman named Iris? (Answer: Unlikely.) Did Betty Friedan really deflate Julia’s sails so badly that it took Fred Rogers to console her before she could rally herself to continue the show and save the careers of dozens of people? (Answer: Doubtful — though she did go on to appear on Mister Rogers’ Neighborhood.) 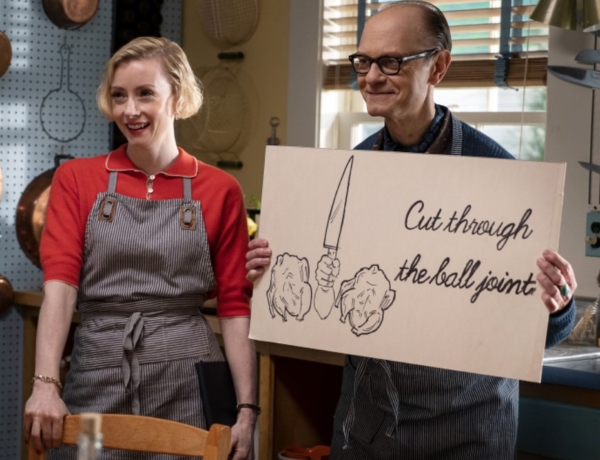 Most of these things did not stick out so egregiously as to distract from the story that Daniel Goldfarb crafted for HBO Max, so they were easy to set aside in the pile of “things to look up on Wikipedia later” and just let myself be swept up into the delightful little world of sunny kitchens and quirky television chefs. In fact, some of the historical inaccuracies actually made for more interesting storytelling in a broader sense.

For instance, while Ruth Lockwood may not have been Black, Alice Naman is based on Black women who did exist in public television at that time and whose stories may never get to be told except to be glimpsed through her. Giving Lockwood’s role to a Black character takes nothing away, but instead gives a broader view of the culture The French Chef was birthed into and helped shape. It was a groundbreaking show — Julia never lets us forget that fact — and it was groundbreaking for its gender and racial inclusivity during a time when there was very little of either, just as much as it was influential for the way it revolutionized public television content and cooking shows all together. In this sense, the “inaccuracy” serves a larger purpose in underscoring just how much of Julia Child’s world was brought to life by women and people of color, all working behind the scenes to ensure her success. 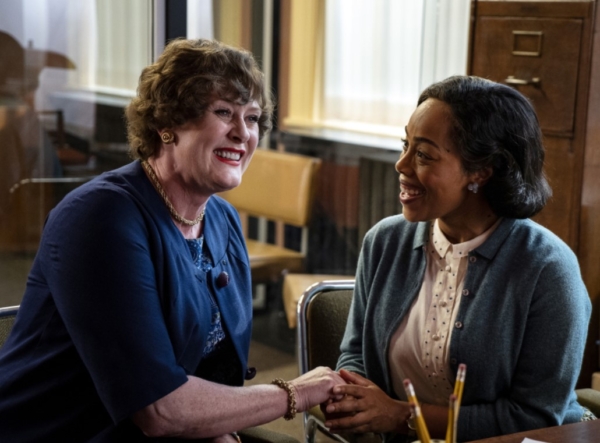 The Betty Friedan and Iris plot points, however, stuck out as slightly out of sync with the otherwise acceptable level of believable inaccuracies in the show, and I’m still not sure how I feel about them. As far as the Iris storyline goes, well, it really doesn’t go anywhere. It’s awkwardly presented (no doubt because such conversations are bound to always be awkward) and then dropped completely almost as soon as it’s raised.

I struggle with wondering if my discomfort with it is because Julia is obviously discomfited by Iris’s plaintive retelling of a night of drunken skinny dipping … and maybe more … or is it because it just seems so out of the blue to throw in a detail like that about a public figure’s whose entire life is pretty well documented without any real basis in fact? Or was it a hamfisted way of trying to acknowledge that, in real life, Julia Child was often described as “mannish”? If so, it strikes me as a weird way of introducing the character’s nontraditional feminine attributes when the show actually does a bang-up job presenting Julia as almost excessively traditionally feminine and certainly extremely heterosexual (as if there was any doubt with all the humping that she and Paul get up to every episode).

Especially when, in the very next episode, Julia is whisked away to a drag nightclub in San Francisco by James Beard and meets a young queen, the delightfully named Coco Van, who uses Julia as her inspiration in her drag show. I was dreading the awkward moment where Julia is confused for a drag queen herself, but the show steers clear of that low-hanging faux pas, and instead Julia has a magical night finding acceptance and friendship in unlikely places. 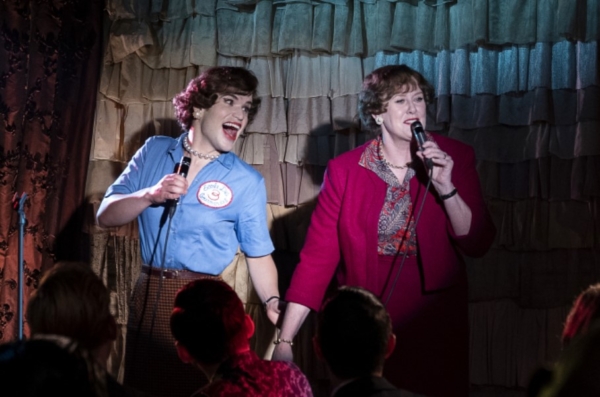 Similarly, the Betty Friedan episode still has me hung up on what I’m supposed to take away from it. In Episode 6, Julia is asked to be the guest of honor at a public broadcasting gala in New York City, and it’s there, in the afterglow of her moment of triumph, she quite literally bumps into Betty Friedan, feminist author of The Feminine Mystique. The conversation starts amicably enough, though Friedan suddenly changes the tone and launches into a vicious attack on The French Chef, and Julia’s role in setting the women’s movement back decades by “shackling” women to the kitchen, trying to master complicated recipes and unrealistic standards to please their husbands, when they should be out marching in the streets for equality. It’s an attack that comes out of nowhere and leaves Julia shaken to the core.

She leaves the gala in a daze with her trusty sidekick Avis De Voto and devoted husband Paul, but at the last minute asks to have a moment alone, sitting on a settee in the grand foyer of hotel while she tries to collect herself. Up walks a young Presbyterian minister who sees she’s upset, and she impulsively asks him to sit with her a moment. He tells her that he likes her just the way she is, and somehow everything is better. The episode as a whole is so neatly packed with heavy-hitting emotional blows to Julia’s apparently very fragile ego, that it almost renders itself a spoof on Julia Child’s real life run-ins with the women’s movement. Throwing Mr. Rogers in at the end was the bow on top of the emotional gut-punch package. 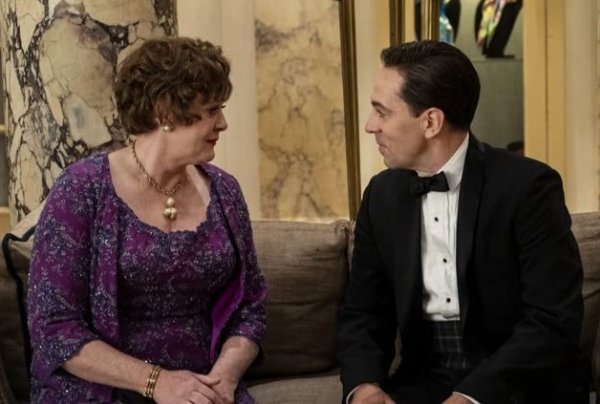 Without delving too deeply into the extensive cultural history of The French Chef, it is no question that feminists like Friedan viewed Julia Child’s work as regressive and antithetical to the advancement of women as equals to men. There’s a particularly virulent undercurrent in second-wave feminism that all but alleges that Child was a traitor to her sex by rigidly adhering to traditional ideals about a woman’s place in society, and Child herself tended to downplay any suggestion in her lifetime that she should be viewed as a feminist trailblazer (though, as this Jezebel article, written after the release of Julie & Julia in 2009, points out, Child “made good food democratic” and helped people all along the gender spectrum to embrace the joys of cooking).

The early 1960s was before the time when feminism could allow itself to embrace domesticity and view it as an act of agency, however, and the run in with Betty Friedan meant to synopsize the intricacies of the cultural tug of war happening in the women’s movement. Episode 6 does poke at this overtly historical fact, but again, it really doesn’t take it anywhere. The episode ends with Paul, himself struggling with effectively reversing roles with his wife and becoming the stay-at-home partner instead of the working partner, sort of acknowledging that different people have different truths about their version world, which Julia finds as unsatisfying to hear as I do. 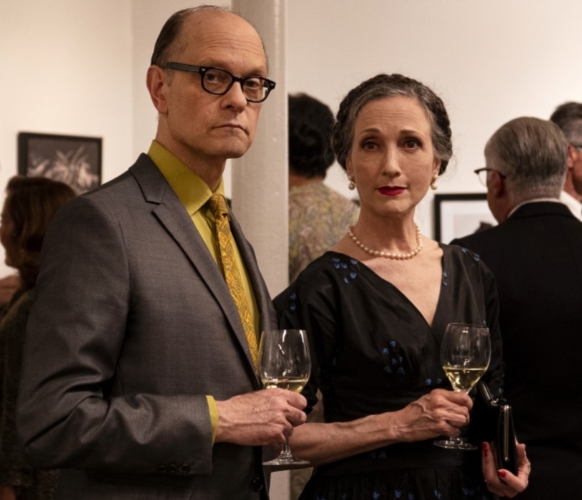 Is personal truth more correct than factual truth? Is historical accuracy really more accurate than fiction? Do the things I’ve outlined above, and that others have raised elsewhere on the internet in discussion about this show, serve to provide contextual cues about Julia Child’s world and her place in it? But does that really make it “true”? We already know we are living in a post-truth world, which leaves this very much an open-ended question that likely will have no satisfying answers.

I’m not sure I know the answer to that question. Do you?