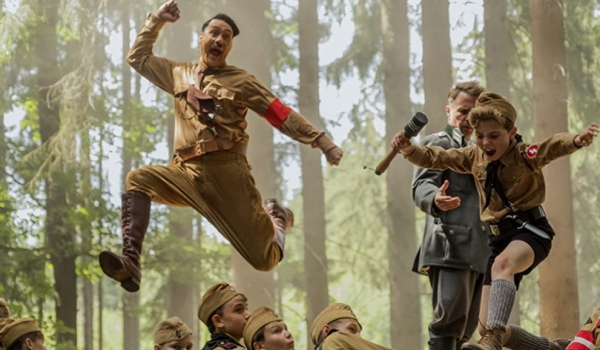 I have been meaning to get around to reviewing Jojo Rabbit (2019) for a while now, aside from a brief overview of some the film costumes from our 2019 FIDM exhibit coverage. It’s one of those films that takes a very serious topic (World War II) and injects just enough surreal humor to make the otherwise deeply depressing subject matter enjoyable.

Directed by Taika Waititi, and costumed by Mayes C. Rubio (who is currently wrapping up the last bit of WandaVision), the film is set in Germany during the waning months of World War II. The action is told through the point of view of Johannes “Jojo” Betzler, a 10-year-old member of the Hitler Youth, whose imaginary friend is Adolph Hitler (played by Waititi). Jojo’s beloved mother is Rosie (Scarlett Johansson), who he has a close bond with after the death of his father. Jojo believes Rosie is as devoted to the Third Reich as he is, but in reality, she is secretly working in the Resistance and hiding a young Jewish girl, Elsa, in their attic. Jojo is horrified when he learns that his mother has betrayed the Führer and is forced to grapple with the reality of who his parents really were after tragedy strikes. As he begins to get to know Elsa better, realizing she isn’t some lizard person who lays eggs and shoots fireballs from her eyes (yes, really), his imaginary pal Hitler starts to morph from silly and funny into something monstrous. 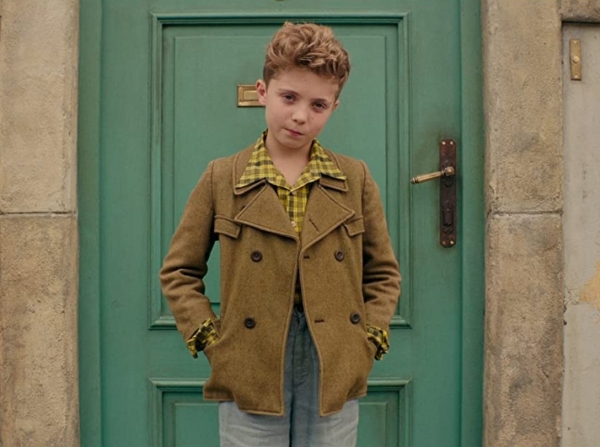 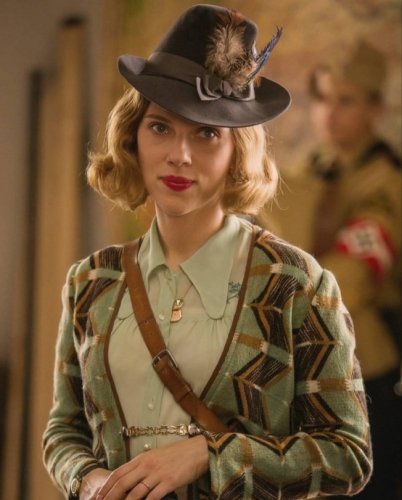 ScarJo gets some fabulous sweaters in this film. Her costumes are stylish but practical. 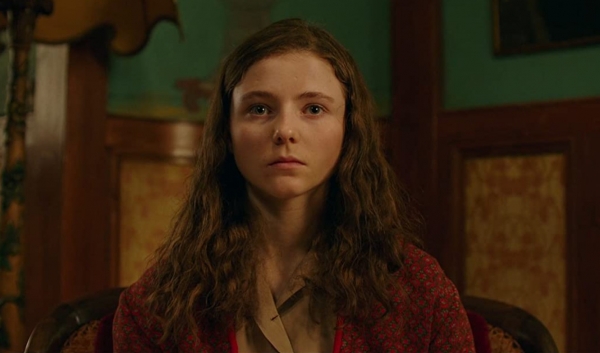 Elsa, played by Thomasin McKenzie, is a few years older than Jojo and she’s seen a lot of shit. She gradually begins to replace Hitler as the voice of reason in Jojo’s life. 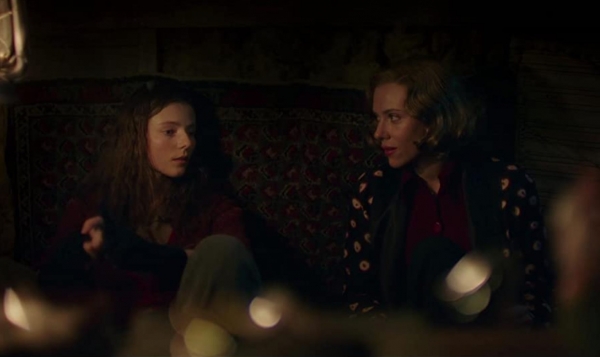 Rosie visits Elsa in the attic every night after Jojo goes to bed, to feed her and talk with her. 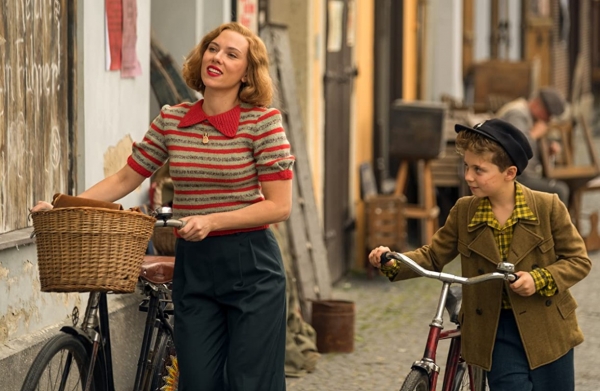 When Jojo isn’t at the Jungvolk training camp, he and his mother enjoy biking around their village. Rosie is always upbeat and trying to keep a positive outlook for her son while the world is going to literal shit around them. 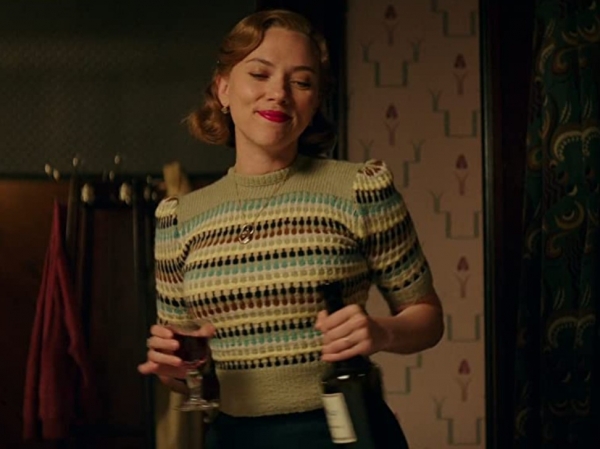 The cardigan and sweaters in this film are on point. 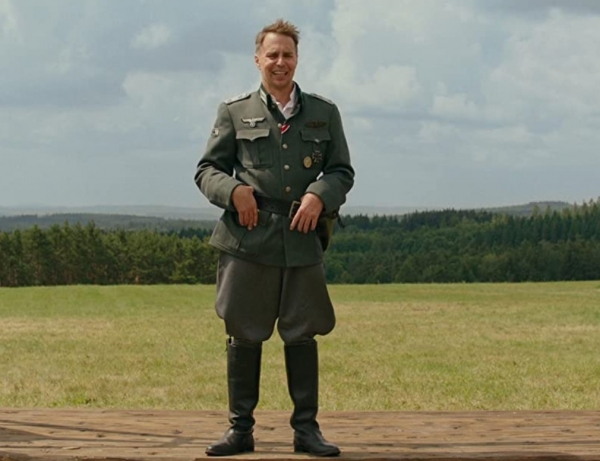 Sam Rockwell plays Captain Klenzendorf, the Nazi officer who runs the Jungvolk camp and who unexpectedly plays a significant role in resetting the trajectory of Jojo’s life as the Allies advance on their village. 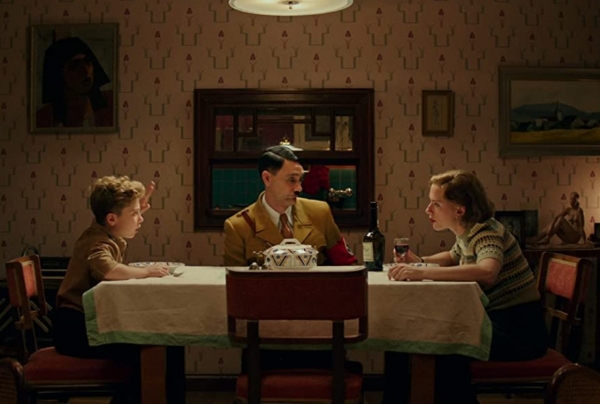 Three’s a crowd when your imaginary pal Hitler is always lurking around, getting in the way. 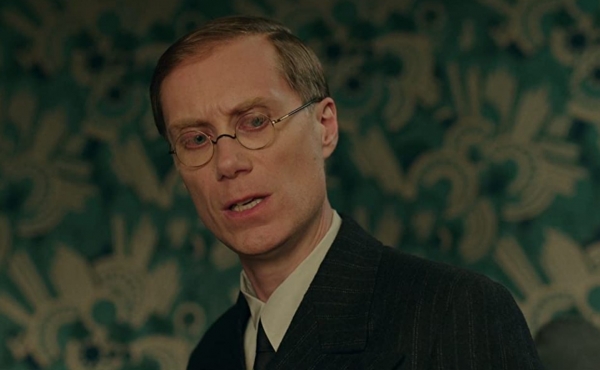 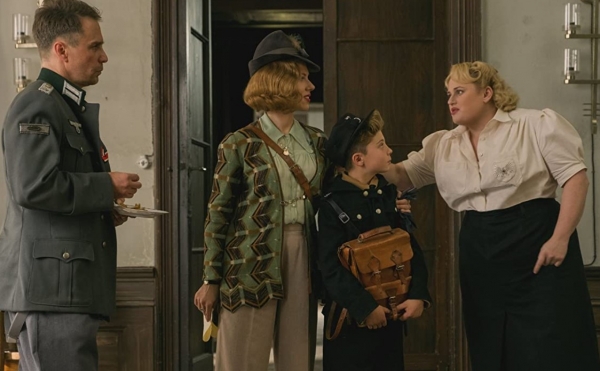 Rebel Wilson has a small part as Fräulein Rahm, an instructor for the girl’s section of the Jungvolk camp, and some sort of assistant in Captain Klenzendorf’s office. 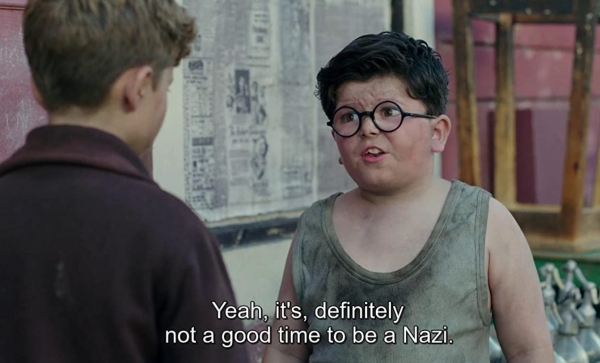 Yorki (played by Archie Yates) is the closest thing Jojo has to an age-appropriate playmate. He gets conscripted into the German army at the age of 10, quickly rising through the ranks as the Allies lay waste to the village. Of note is the paper uniform Yorki wears towards the end of the film (which I couldn’t find a good image of), which wouldn’t surprise me if it was a historically accurate recreation. 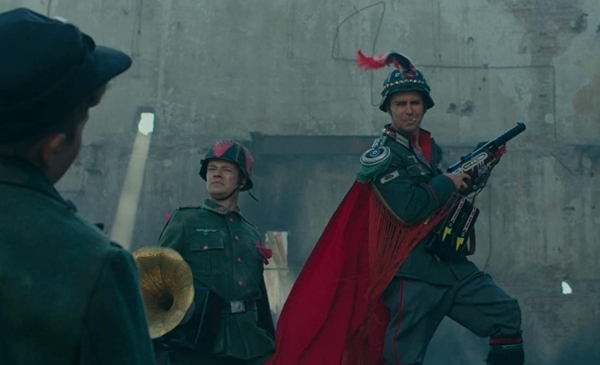 Klenzendorf strides into battle in a uniform of his own design, with his assistant blasting an inspiring soundtrack on the portable photograph behind him. If you’re going to go down, might as well go down fighting and wearing a fringed cape.

The film overall is beautiful and tragic and uplifting and hysterically funny and deadly serious all wrapped up into a thoroughly enjoyable 1 hour and 48 minutes. I am not a huge fan of WWII films, but I’ve watched this one several times since it first came out, and it easily is one of my favorite recent historical flicks of the last couple of years.

Did you watch Jojo Rabbit? Tell us about it in the comments!