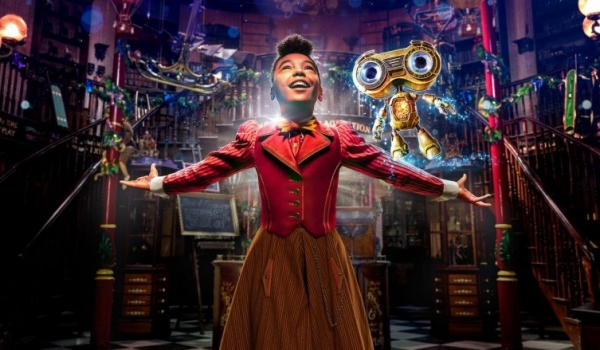 I’m going to start off by saying that I generally do not like musicals, steampunk, and frantic dance choreography, so Jingle Jangle: A Christmas Journey (2020) was not high up there on my list of things I was going to watch this holiday season. That was until I started seeing promo images of the actors in their costumes that my attention was sparked and I realized that I needed to suffer through the Christmassy jazz hands to find out more about the amazing designs done for this show.

While I do classify the film overall as steampunk and not historical, the story and setting (like steampunk in general) draws from historical themes and silhouettes. There’s also a definite reference point in the costume designs by Michael Wilkinson that draws directly from the work of British-Nigerian artist Yinka Shonibare. It’s this visual wink and a nod to Shonibare which is what initially caught my eye. As a student of historical costume and art history, Shonibare is a contemporary artist who is hard to miss. His works align Western historical fashion history with anonymized African bodies and explores the complexities of searching for an elusive “true African culture.” I’d bet money that many of you reading this have at least seen How to Blow Up Two Heads At Once (Ladies), whether or not you knew the artist by name. 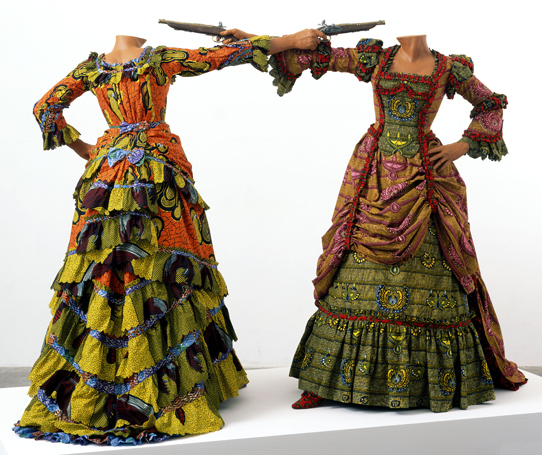 Once you see Shonibare’s work, you can’t unsee it in the costume designs Wilkinson did for Jingle Jangle: A Christmas Journey: 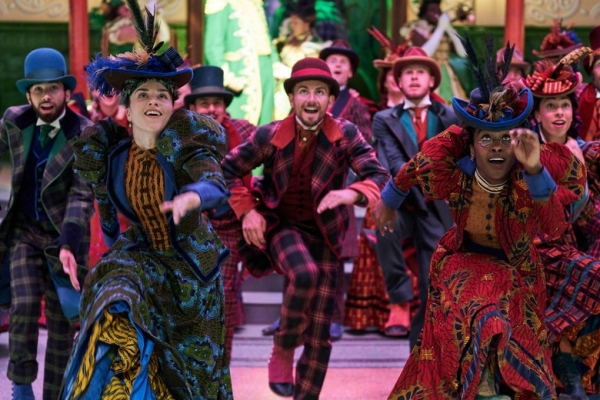 I love the way the African-inspired fabric pulls together with the more traditional Victorian plaids to create a riot of color and visual vibration. I, for one, welcome all the costumes and cosplays inspired by this film that will almost certainly be showing up at The Great Dickens Christmas Fair in the coming years.

This makes a certain amount of sense, considering Wilkinson admits that he was drawing from West African textile traditions with their bright motifs and attention-grabbing color combinations. He doesn’t outright name Shonibare as an influence, but I think it’s pretty clear there is that exact intersection between African identity and culture and European fashion history in Shonibare’s work that Wilkinson pays homage to in his designs for Jingle Jangle:

“When deciding on the fabrics used, [Wilkinson] was particularly drawn to the textiles of West Africa for their bold colors and patterns. And for research, he explored paintings, historical documents, prints and photographs from the period. Working with Talbert, he wanted to bring the 19th century to life.” Costume Designer Michael Wilkinson Shares ‘Afro-Victorian’ Vision of ‘Jingle Jangle: A Christmas Journey’, WWD.

The movie starts off with a mid-19th-century silhouette, circa the 1860s, but the setting (a magical toy shop) and the costumes (in bright colors and bold motifs that reject any hint of stuffy Victoriana), quickly makes it evident that this is not your great-great grandmother’s Victorian utopia. This is something else entirely. 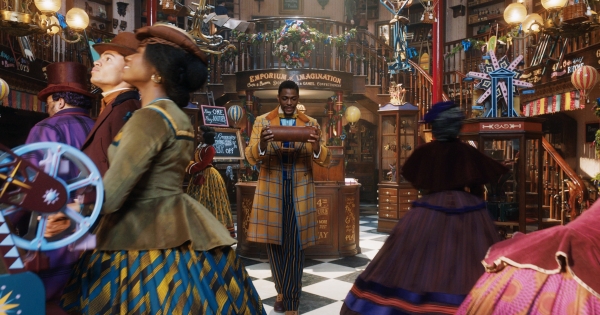 Justin Cornwell plays the young and successful version of the film’s protagonist. He’s an incredibly successful toymaker who specializes in wondrous mechanicals. 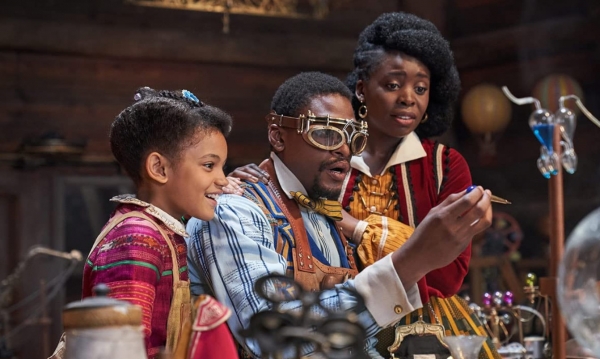 After the first song-and-dance routine and some brief establishing narration explaining that Jeronicus Jangle’s toy empire crumbled to dust after his assistant stole the notebook that stored all the magical equations for his toys, the film fast forwards about 30 years. Jeronicus’ daughter Jessica is now grown up with a daughter of her own, Journey, who is a precocious child genius with an aptitude for the kind of magical equations that her grandfather used to create his toys. Newcomer Madalen Mills plays Journey with all the confidence of a seasoned Broadway star, and she is tasked with carrying a lot of the burden of the laborious plot as it is periodically interrupted by musical numbers and frenetic dancing, a feat which most 10-year-olds probably couldn’t pull off as effortlessly as she seems to, so props to her. 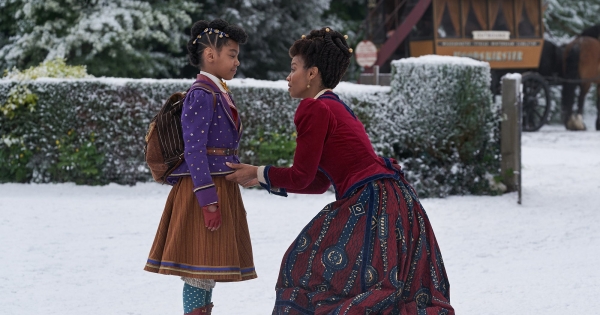 Jessica sends her daughter off to meet her grandfather for the first time. 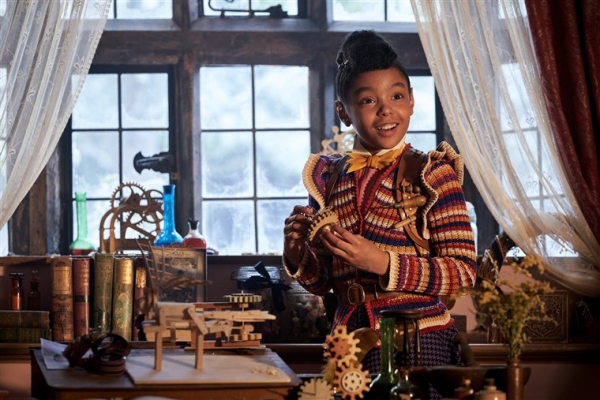 Her little tool holster kills me. Also, I am 99% certain I had a similar jumper knitted by my grandmother when I was her age. 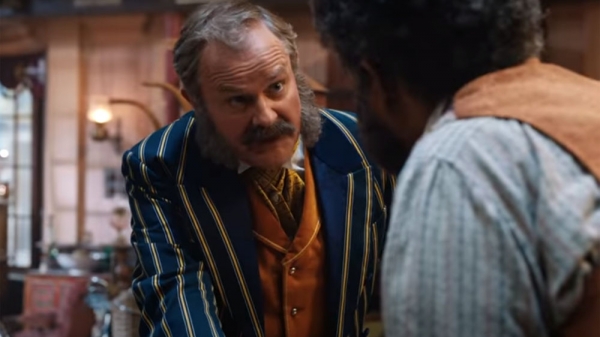 Hugh Bonneville plays a banker who has the unenviable position of informing Jeronicus that his shop will be closed forever if he cannot create a toy that will sell by Christmas. I really loved the rich deep blue and gold striped jacket he wears in his first scene. 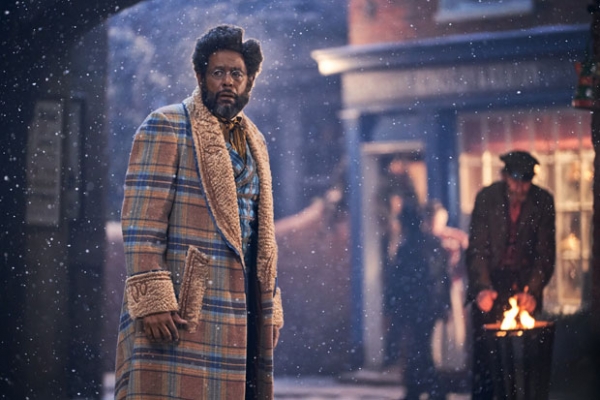 Old Jeronicus, played by Forest Whitaker, in his signature plaid shearling-lined housecoat. The designs in the film make great use of stripes and plaids in gorgeous silk and wool fabrics. I tip my hat to the costume department’s drapers and patterners who were able to match pretty much every stripe and plaid thrown at them. 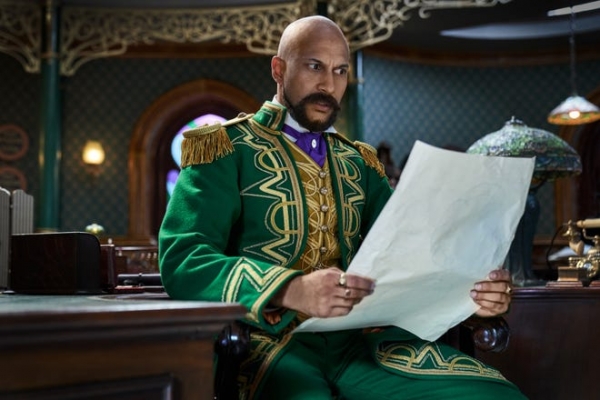 I am a big fan of Keegan-Michael Key so his role as the movie’s bad guy Gustafson was certainly a draw. The downside is that his character isn’t even on the scene until halfway through the film except for the first 5 minutes of establishing his relationship to the Jangles. 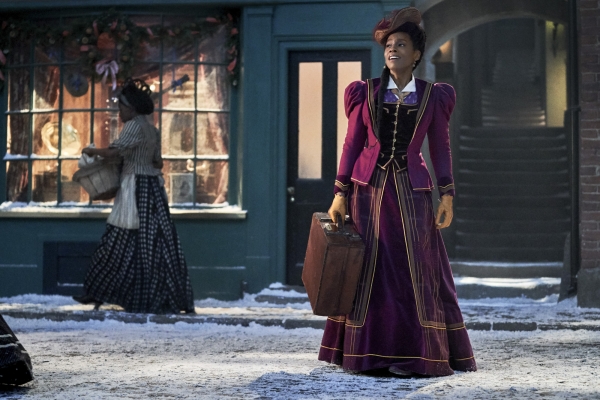 Anika Noni Rose plays Jessica, the estranged daughter of toy inventor Jeronicus Jangle. She sends her daughter, Journey, to stay with Jeronicus until Christmas before she arrives to reunite with her father.

I would have to say that at the end of the day, while this film was completely not my usual sort of jam, I could absolutely see myself tuning in again simply to enjoy the visuals.

Have you watched Jingle Jangle: A Christmas Story? Tell us what you thought of it in the comments!