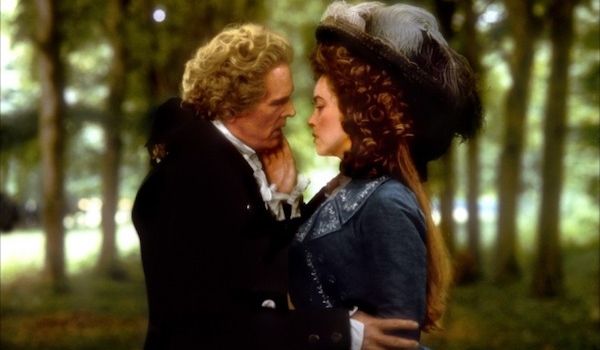 Another mixed bag — it’s a Merchant/Ivory production, which in itself should be enough recommendation.  The plot centers on Thomas Jefferson’s (Nick Nolte) time in Paris, where he becomes entangled with a married woman (Greta Scacchi as Maria Cosway) and then one of his slaves (Thandie Newton as Sally Hemmings, who Jefferson would go on to have many children with), while juggling his relationship with his daughter (Gwyneth Paltrow).  I rather enjoy the first half, which focuses on the Jefferson/Cosway/Patsy Jefferson triangle, but when the film tries to address the Jefferson/Hemmings relationship and the complicated issues surrounding slavery, it just doesn’t do it justice — this relationship probably needs to be the focus of its own film (or many films!) to really fully explore it.  Nonetheless, Nolte is not as painful as you’d think as Jefferson, Scaachi and Newton are (as always) mesmerizing, and Gwyneth Paltrow gives one of my favorite of her performances.  AND THE COSTUMES ARE FABULOUS, FABULOUS, FABULOUS.