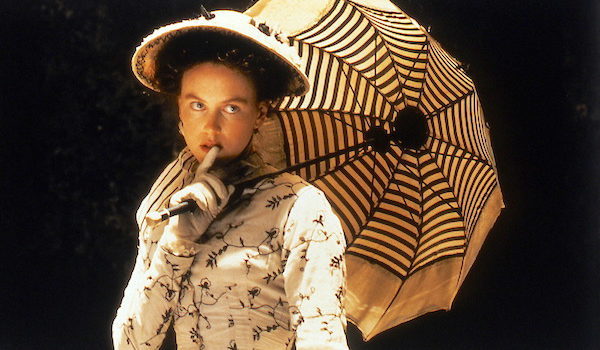 Hat tip to reader Sarah B., who alerted us to the passing of amazingly talented costume designer Janet Patterson. An Australian who was known for her collaborations with strong female directors Jane Campion and Gillian Armstrong, Patterson didn’t do a ton of films, but the ones she did are totally memorable:

Janet Patterson’s first period work (after Australian TV miniseries Palace of Dreams) is a pivotal one for historical costume on film. The story of a mute woman who goes to New Zealand as a mail-order bride and finds herself is an intense one, but it’s only augmented through Patterson’s genius costume designs. Who can forget Ada turning her crinoline into a tent for her daughter when they’re left on the beach? Ada’s somber black wardrobe is beautifully made and shows the contrast between the world she’s left behind, and the prison in which she’s bound herself. Such a memorable costume moment!

This is one of the best depictions of natural form (very late 1870s, when women stopped wearing the bustle but still wore all the back draperies) that I’ve seen on film. Patterson shows Isabel’s transition from spunky, independent American to emotionally abused and repressed wife through costume, and the repeated shots of Isabel’s long, intricate trains dragging as she walks beautifully demonstrates all that tries to hold her back. Nicole Kidman as Isabel Archer, longing to break out… Isabel bound by a misguided marriage. Step-daughter Pansy, who lives her life under her father’s thumb.

Two misfits (Cate Blanchett and Ralph Fiennes) meet in 1880s Australia and find common ground and a connection. Janet Patterson incorporated elements of reform dress, including pantaloons, into Blanchett’s wardrobe in order to demonstrate her iconoclasm. Lucinda, a rich heiress with a gambling problem… Most of this film is set in the fantasy world of Neverland, but Patterson’s designs for turn-of-the-century London (at the beginning and end of the film) are just gorgeous, especially on Olivia Williams as Mrs. Darling: A beautiful take on a turn-of-the-century evening gown.

The 1820s story of Fanny Brawne, fiancée of poet John Keats, is only improved by the fact that Brawne made her own, artistic and fashion-forward, clothing. Sewing places a key role in the movie, and Fanny’s creations are beautifully contrasted with the very normie clothes worn by the other characters. Such a gorgeous shot. The typical female of the film… Maybe not our favorite, given how the timeframe was moved up and main character Bathsheba is given an awfully tomboy-ish wardrobe (including leather pants!), but Janet Patterson acquit herself well in this Thomas Hardy adaptation. As the wealthiest woman in the area, she has the best gown at this party, but it’s not too showy for the countryside.