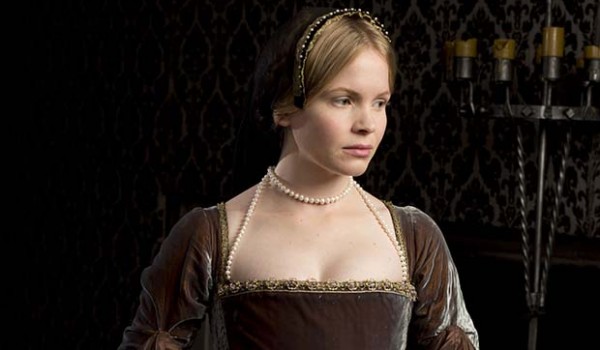 The 2015 TV adaptation of Hilary Mantel’s novel Wolf Hall — produced by the BBC and airing on PBS in the US — is, in many ways, a history nerd’s wet dream. It focuses on the political machinations of Thomas Cromwell as he begins working for Henry VIII and goes through the rise and fall of Anne Boleyn. The small, but lethal, character of Jane Seymour is critical to the story, and in this post, we’re going to analyze her character and her wardrobe.

Important note: I will try not to give away too many spoilers, but to effectively talk about Jane Seymour, I’ll need to talk about some things that happen in the last (sixth) episode. So you may prefer not to read this until after you’ve watched the entire series.

Of course, this isn’t the first time Jane Seymour has appeared on screen. If you’re interested in previous depictions, check out my previous post about Jane Seymour in movies and TV. I think, as modern people, we see Jane as supremely unattractive, but I believe that’s mostly her receding chin (any sign of a double chin = fat these days, and fat = horrible / awful / disgusting / etc. Isn’t our modern culture SO SUPERIOR?). Sorry, minor political rant. The real Jane Seymour, painted by the Cast Shadow Workshop, 1536.

According to imperial ambassador Eustace Chapuys, who was pro-Jane given that she was old-school in her religion (and anyone would have been better than Anne Boleyn), described her as “‘of middle stature and no great beauty, so fair that one would call her rather pale than otherwise’ and added that she was inclined to be proud and haughty” (quoted in the Oxford Dictionary of National Biography, “Jane [née Jane Seymour] (1508/9–1537), queen of England, third consort of Henry VIII”).

In general, I like the casting. Played by Kate Phillips, I’d disagree with those who say that she’s too pretty for Jane. Philips is attractive, but not a supermodel, and she has the requisite blonde hair and pale complexion (don’t get me started on all the “blondes” with dark brown eyebrows these days).

Jane Seymour begins as “the lady who cries a lot,” but it’s clear from the beginning that she’s going to be important. She’s clearly struggling with life and being at court and would be a wallflower if not for the crying. Although she doesn’t DO much else, it’s clear that she’s important in some way, because Cromwell clearly notices her AND asks about her, repeatedly. Cromwell and she have a brief conversation, in which he kindly jokes about her spying (presumably on Anne Boleyn). She says that she’s not very good at it as she doesn’t speak French. Later, we see extra-evil Jane Rochford teasing Seymour, with Seymour not really defending herself.

It was hard for me to judge exactly what Cromwell’s interest was in Jane. He specifically asks her brother, Edward, if there are marriage plans for Jane. He even sends her a gift of sewing patterns. Jane is the only background character that Cromwell goes out of his way to cultivate, at least in terms of what the TV series shows us, so clearly this is Important. Cromwell’s attention to Jane doesn’t go unnoticed; Anne Boleyn asks him, “Why don’t you ask for her?” Cromwell responds, “You mistake my interest.” Was Cromwell really thinking of her for himself? And then was cut off when the King noticed her? Or was he thinking of her for Henry all along?

Either way, she’s very much on Cromwell’s mind, so much so that he changes the royal progress to include her family’s home (the overly-mentioned “Wolf Hall”) — so that he can see her? So that Henry will see her? I was unclear. At one point Cromwell is shown watching Henry and Jane together through a window. Was Cromwell disappointed that Henry had grabbed his girl? Or was he simply observing the chess pieces that he was putting into alignment?

Over time, Jane Seymour progresses from crying wallflower and observed object to player. There are two key scenes: In one, she receives a purse of money from the king, which others later (admiringly) tell us she kissed and sent back. Did she do this from scruples or for calculation? I don’t know.

Later, when Henry is visiting her family’s home, he falls asleep at the lunch table. No one wants to be the one to wake him up, and they go back and forth with “YOU do it.” Jane suddenly gets up, marches quietly up to Henry, and puts her hand on his arm, waking him. She’s suddenly decisive, daring, and yet subtle.

Notice the fact that the outer gown is pinned to the kirtle (undergown).

Kate Philips was in her final year of drama school when she auditioned for Wolf Hall. This was her first professional gig, which is clearly a major coup. She says,

“Of course it was terrifying stepping onto the set of Wolf Hall and there were moments when I thought, ‘I’m so bad, I’m sure they must regret casting me’, but you have to snap out of it. It’s a job and you are there to work and deliver the very best performance you can.” — Yorkshire Post, How I Stepped Out Next to Damian Lewis

The source novel gives a bit more information about Jane, but not much.

In Bring Up the Bodies, she has become “a plain young woman with a silvery pallor, a habit of silence, and a trick of looking at men as if they represent an unpleasant surprise.” Henry claims that “she has no guile in her,” yet there are hints of her ambition and coming prominence, for example when Anne Boleyn finds a drawing of a headless queen in her bed, which had been made that night by Jane. — The Telegraph, Who Was Jane Seymour?

Apparently the third book in Hilary Mantel’s series will focus much more on Jane Seymour, so we’ll get to see all of these subtle clues come to fruition.

Jane Seymour’s wardrobe can be summarize as: Comparatively subtle with a hint of changeability.

If you compare Jane with the other female characters, like Anne Boleyn, Mary Boleyn, and Jane Rochford, you’ll see that Jane Seymour is always wearing relatively somber colors. However, there are a few hints that she may have surprises lurking in her sleeves or under her hood!

Jane’s first ensemble is a very dark burgundy velvet gown, with burgundy taffeta sleeve turnbacks. Note how the crimson red undersleeves peek out of this somber ensemble, giving a flash of color that ties in with the sleeve turnbacks.

Also of note is the fact that Jane’s hoods are NEVER terribly ornate. They are always tight to the head, with a simple white frill around the face and a small row of bilaments (the jewels around the face). Also, contrary to some of the other characters, the hood itself is always black, never white. Jane is modest, quiet, and retiring.

Next she wears a drab, blue/brown velvet gown with royal blue undersleeves:

So much that’s good here — the bust silhouette is fabulous. That line of the pearls stretching to the outside of the bust is right out of portraits. And look at the pins holding the sleeve turnbacks in place!

What is interesting is how this dress changes color subtly in the light, emphasizing the brown. Perhaps Jane has hidden depths that can only be seen if you look very carefully? The only color pop here are the bright blue sleeves; even the sleeve turnbacks are a subtle tobacco brown. It’s also a little bit friskier — she’s got gold lace along the edge of her French hood, and some gold and pearl trim along the bodice.

Then she’s back in that first outfit — the red velvet:

When the court comes to Wolf Hall, Jane is looking VERY middle-class hausfrau.

A drab olive green dress, opening up down the center front of the bodice, showing a matte salmon pink kirtle. Jane also almost always wears black velvet partlets (the shoulder/neck fill-in); here you can clearly see where it is pinned on (so historically accurate! so good!). Even her jewelry is simple — a narrow strand of small pearls. Is that flash of pink kirtle again a hint of Jane’s hidden depths? This is the outfit she wears when she wakes the king, showing that small flash of fire. It’s interesting that her family hasn’t covered her in silks and jewels, but presents her as the drab little sparrow. Perhaps they haven’t yet realized what they have in Jane?

This is the outfit Jane wears when she receives the king’s gift, but sends it back. It’s the changeable gown worn above. This time she’s wearing a sheer white partlet, but she’s definitely covered nonetheless.

Compare her still-simple hood with the slightly bigger one on the lady on the right.

The king has noticed her, so perhaps that’s why she’s wearing the red patterned undersleeves and petticoat?

Beautiful blackwork on the cuffs!

What did you think of Jane Seymour as a character and Kate Philips’ performance? Did Jane’s costumes suit her character?