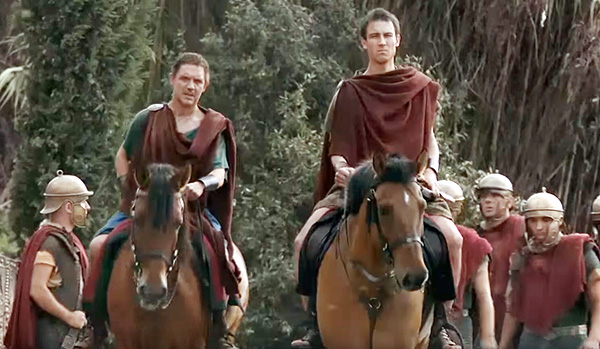 Frock Flicks note: This is a guest post by Mary Pagones, the author of the popular LGBT+ equestrian fiction series Fortune’s Fool, and also writes m/m fiction as Quinn Wilde. You can find her on Twitter at @marypagones and Instagram at @pagones721.

There was a recent, much-shared article in the Smithsonian Magazine about a recent archeological dig that revealed that medieval war horses were, well, a lot smaller than Hollywood or BBC prestige period television might lead us to believe:

“In the largest-ever study of horse bones to date, research by five English universities study examined the bones of nearly 2,000 horses. The specimens, which date from the 4th to 17th centuries, were recovered from 171 unique archaeological sites including castles and medieval horse cemeteries … Their work revealed that the majority of medieval horses, including those used in war, were less than 14.2 hands (4 feet 10 inches) tall from the ground to their shoulder blades — the maximum height of a pony today.”

So, I fully expect, now that this nugget of information has been revealed, to see fewer majestic medieval mounts like the one Tom Hiddleston is riding in The Hollow Crown (2012): 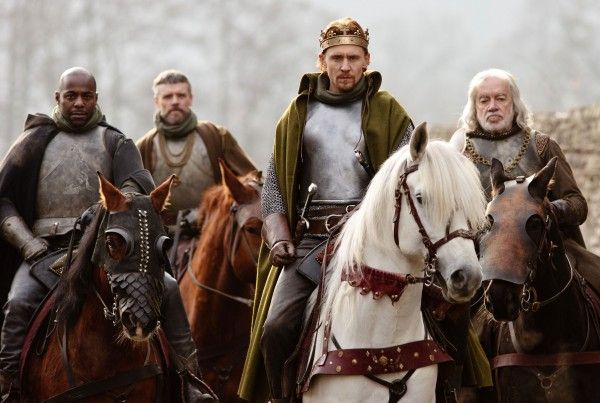 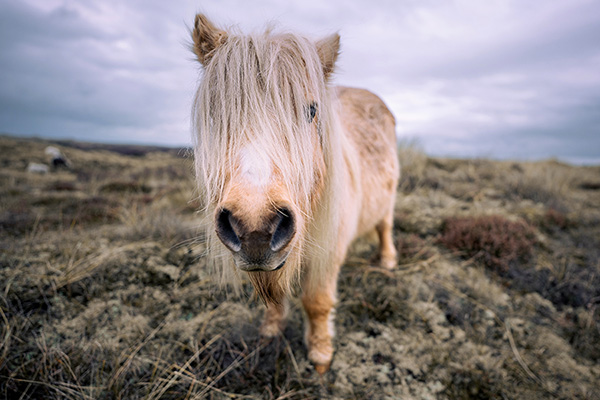 Just cancel every single production-in-waiting about the Middle Ages and big, beefy dudes on Friesian horses. Not historically accurate.

Of course, I’m joking. I fully expect a Friesian-o-rama the next time I venture onto my favorite streaming services and watch a medieval film. Just as with costuming, when casting horses, telling a visually interesting story that is understandable to a modern audience is always the biggest priority for filmmakers.

Historical accuracy is limited by the horses that are available and trained to work on film sets, as well as the limits of the actors as riders. Yes, an actor might be able to fake being a king through sheer charisma and panache, but you can’t fake out a horse. Hence, the need for stunt doubles for serious riding scenes and also horses that are fairly tolerant of rider mistakes for close-ups.

Even if actors already know how to ride, or have tried to learn to ride for a part, films must use horses that are safe and available for a busy movie or television set, which might not be the most historically accurate breed horses. If there are medieval-style (cough, non-Friesians) available, horse selection is also often more based upon the likely prejudices of the typical, non-horsey viewer, versus historical accuracy.

A majestic, strapping beast with a full mane and tail screams king, lord, or badass knight versus the actual type of horse an actual knight may have ridden.

In case you’re wondering about the riding ability of actors commissioned to play professional riders, take a gander at this shot of Ben Whishaw from A Very English Scandal (2018). 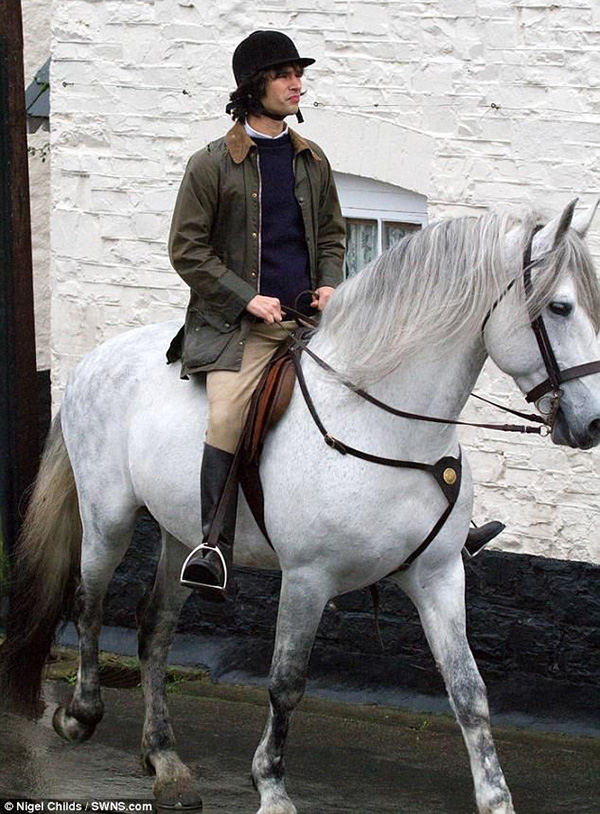 Now, Norman Scott, the historical personage Whishaw was portraying in the TV series, was an aspiring (and by all accounts, a very good) dressage rider. Thank God the filmmakers showed Whishaw mainly cleaning stables and having sex with Hugh Grant, rather than doing actual riding in the production. I am really not sure what’s going on with his pinky fingers there.

Note: I did not expect Whishaw transform into Carl Hester within a few weeks of taking riding lessons. 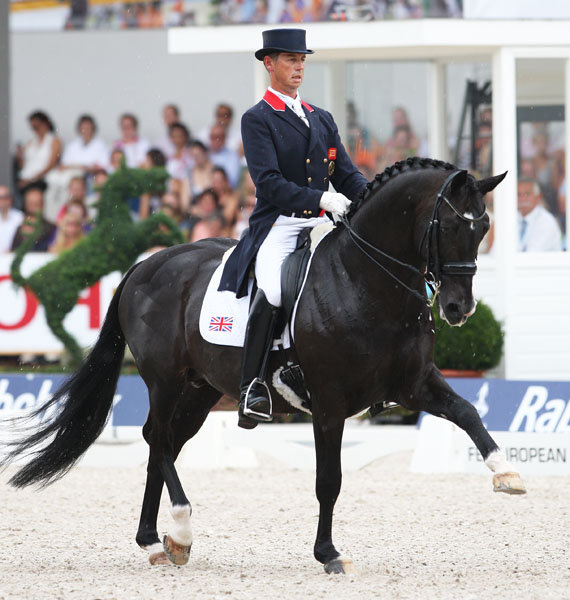 But gazing at photo of Whishaw as Scott, I admit to getting physically twitchy at the desire to ask him to shorten his reins, KEEP HIS THUMBS UP, and to relax his leg.

Costumers did Whishaw no favors by not getting him an actual dressage saddle to ride in and not bothering to find him properly fitted helmet. Whishaw was great in the rest of the production, which you should totally go see if you haven’t already.

Perhaps I should give him some slack about the reins, no pun intended, because it’s likely that a horse on a set that can be ridden by a non-rider is taught to be ridden with zero contact (completely the opposite of how a dressage horse is trained). I’m willing to bet Whishaw was told simply to not touch the horse’s mouth at all, and just let the horse do his thing.

For more examples of actors who probably don’t know how to ride with insanely floppy reins, take a gander at this clip from HBO’s Rome (2005-07):

Rome is a good example of how strategic cutting and touches of realism (such as saddles without stirrups) can create the impression of period accuracy, even if there are the inevitable constraints of finding horses trained for film sets that can tolerate the stresses of the environment and the riding ability of the actors.

Truthfully, I wouldn’t want a purely historically accurate approach to filming horses. A historically accurate pony that is too tiny for a taller actor won’t make me enjoy a film more. As viewers, we must tolerate the (often more compassionate) modern bits horses can be ridden in safely, by non-riding actors. Excessive, ridiculous dubbed-in whinnying, now that I’m less a fan of.

Although, Pursuit of Love (2021), it would have been nice to have cut off the Velcro fasteners on those saddle pads for a movie set during the 1930s. 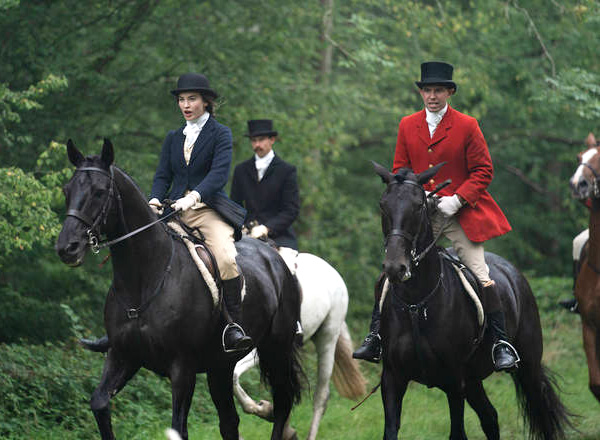 Do you notice how actors ride horses in frock flicks? How do you feel about it?