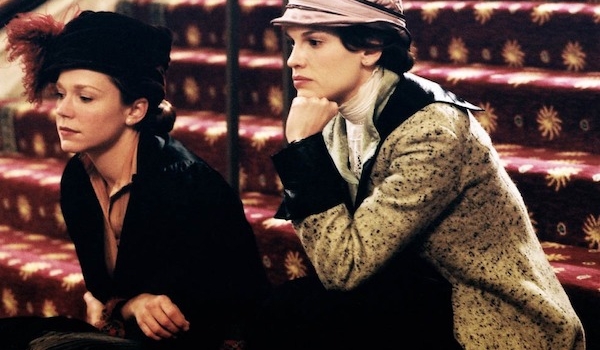 This HBO mini-series recounts the 1910s suffrage campaign led by the National Woman’s Party. Hilary Swank plays Alice Paul with Frances O’Connor as Lucy Burns. The filmmakers were DEFINITELY going for the young market with this, as the editing and soundtrack are very MTV (modern pop songs, for example — the final climactic scene of a movie about women’s rights is overplayed with a song that keeps repeating “You are beautiful” — umm….). They also really girl-ify Paul and Burns and the other suffragists, giving Paul a love interest and adding a whole lot more lipstick etc. than was probably involved. Nonetheless, I found it an entertaining (if shlocky) watch, and I’d definitely say it’s worth a rental. But if you’re really interested in the history of the suffrage movement, please find a more reputable source! Some cute clothes showing the real changes going on in this decade, as costume became more recognizably modern.