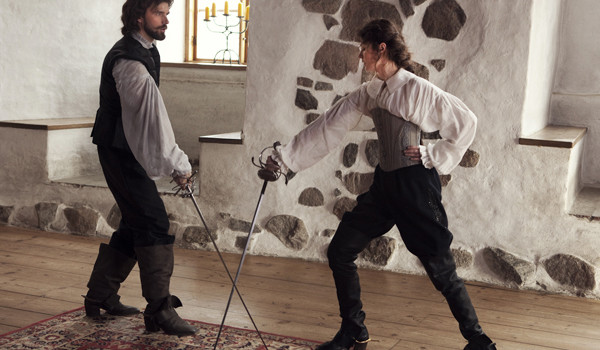 Finnish-Swedish production The Girl King (2015) has finally opened in the U.S., and I’m pleased to have had the chance to interview the costume designer of this movie, Marjatta Nissinen. When I reviewed the film at the Mill Valley Film Festival showing, I was impressed by both the story and the historical costumes. It’s clearly a movie on a smaller budget, but I could tell that someone was making smart choices influenced by careful historical research. Having talked to Nissinen now, I’m even more impressed. This movie is something of a labor of love for the mostly Finnish crew, whose own country’s history is entwined in Queen Kristina’s biography as much as Sweden’s.

While director Mika Kaurismäki describes Kristina as “a revolutionary free thinker, a connoisseur of art and science, a precursor of the feminist movement, and a strong and visionary politician, a new European,” this film isn’t a modern revisionist tale. It’s an emotionally told story about “a confused, restless, eccentric, and isolated young woman,” as the director calls her, and this is also a good old-fashioned period biopic that makes history entertaining and beautiful to watch.

An award-winning designer, Nissinen has worked on more than 40 feature films and TV series (mostly in Europe) and almost as many opera and theater productions. She was born in Kuopio, Finland, and graduated with a Master of Arts from the University of Art and Design in Helsinki.  In 2014, Nissinen received the Life Time Work Award for Finnish Film Costume Design. For this movie, she and her team outfitted over 1,300 extras and created over 200 costumes for principle actors.

Make sure to read the movie review, and then enjoy these behind-the-scenes insights from Marjatta Nissinen, costume designer of The Girl King, now playing theaters in the U.S. 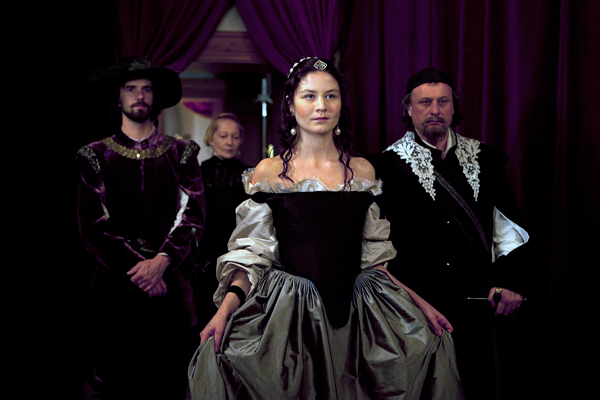 Frock Flicks: What vision for the costumes did the director have?

Marjatta Nissinen: Mika said he wanted the costumes to have clean and pure lines. It was like the castle setting, which was very elegant with white stones lit beautifully for the film. Also, this was his first period film as director and producer, and he didn’t realize how expensive a period film could be, so we didn’t get a big budget, maybe $130,000. [IMDB estimates the film’s total budget was around $7 million, so the costumes would be 1.8% of the film’s budget.]

Frock Flicks: How did you prepare for designing the costumes? What research did you do?

Marjatta Nissinen: I hadn’t been doing this part of the 1600s before, but I’d done periods earlier and later. The beginning of the 1600s is so special because it’s not medieval or renaissance anymore, yet it’s not like later in the 18th century, it’s unique. We always have to start with a solid base of research to make the designs work, that’s what I think of for every piece I do.

For The Girl King, I visited both the Finnish and Swedish archives. Finland was part of Sweden for 500 years, until 1809, so we had rich archives to draw on. Now, in Sweden, the army museum had lots of materials on Kristina’s father and on Karl Gustav, who came after her, but only one portrait of Kristina herself. We had, in the Finnish war museum, a lot of materials about Kristina because we have great respect for her since she ended the Thirty Years War, which was very hard on Finland. We also read many books on costumes of the 1600s and about the life at that time, of course, just a narrow picture, the royalty and people around Kristina, not so much about the everyday people in the country. 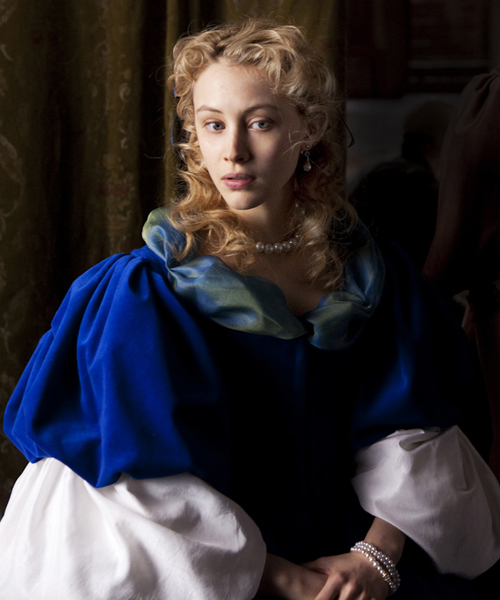 Frock Flicks: What challenges did you face in making the costumes?

Marjatta Nissinen: The great challenge was to pick up my life as a designer and work on-site in Turku [the filming location]! But Turku had a good textile industry and excellent schools there, so we could find people who knew how to work with textiles. There were people who had worked in local opera and theater who knew period clothing that I hired to be in charge of wardrobe, as well as seamstress who had been sewing in factories for 40 years. We needed people who could sew very well for eight hours every day! And then we had young people from the schools — we had about 14 students building props.

Of course, we had to rent some costumes for the crowds, from CosProp and Angels in London, and we rented shoes from Italy. We had to rent things from all over because this period is so unusual.

Frock Flicks: Kristina’s mother Maria Eleonora, wears some of the most elaborate costumes in the film. What went into creating those outfits?

Maria Eleonora was a very important person to Kristina, and that was why we made the clothes so strong. She had so little screen time, so we had to make it super clear what we wanted to say. We found a painting of Maria Eleonora and her retainers dressed all in red, so that was a fantastic inspiration that we had in mind. We were so happy to do these clothes! They were very beautiful, but we were making them at the end — we didn’t have as much money left so we had to use imagination. 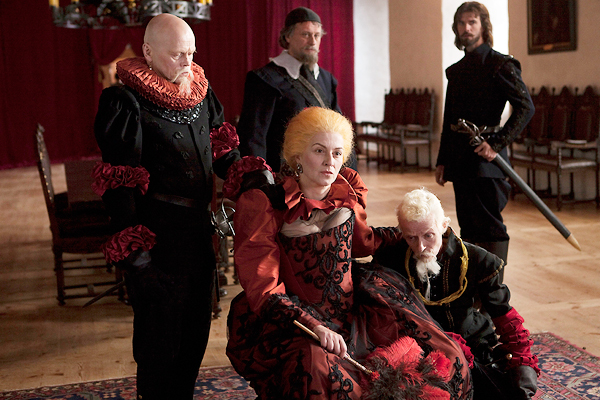 Thank you to Marjatta for her time and to Matt Johnstone Publicity and Wolfe Video for making this interview happen! The Girl King is in American theaters now and available on streaming services soon.