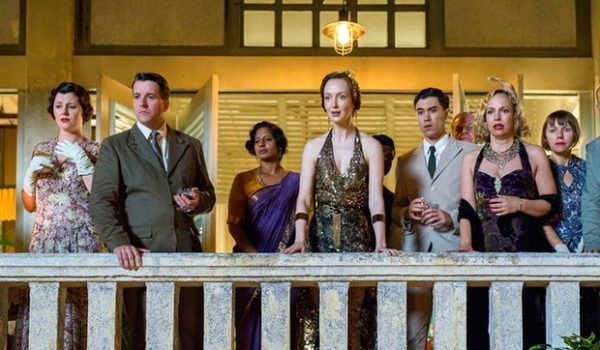 Indian Summers season 2 has come and gone, and all we have to show for it are some tidily and somewhat improbably sewn-up plot points and lovely 1930s costumes! Sadly the series has been cancelled, which means no season 3, and I’m sure that’s why the difficult-to-resolve plots (especially Aafrin and Alice) were wrapped up the way they were. (I mean, I’m glad they didn’t leave us hanging!)

We covered a lot of season 2 in our preview post, including the fact that there was a new costume designer, Wendy Cork. Unfortunately, I still can’t find any press with her, so I’m unsure whether she was just trying to stick with the original designer’s plans or do something different. I can tell you she was nominated for an Australian Production Design Guild award, which makes sense given that the series was filmed in Malaysia.

In terms of plot, I still very much enjoyed season 2, even though I didn’t do weekly recaps like I did for season 1. Watching Cynthia and Ralph machinate for the viceroy position was fascinating, even though you knew he couldn’t possibly get it, because fictional character. And to keep all people of color out of her club! While Ralph isn’t sure if he wants to be viceroy or “go native.”

I’m not totally clear about why Cynthia bought Ralph’s house at the end, but whatever!

The addition of Alice’s husband Charlie wasn’t fun, but it made for a tense plot point. He was such an emotional abuser, and it certainly made you feel for Alice and celebrate her eventual freedom… …even if I’m unsure how society will really accept her and Aafrin’s relationship. I mean, I’m Team Alice/Aafrin, I’m just not sure anyone else is!

I liked watching Aafrin get more political and take some real stands, although I felt like the whole Naresh situation wasn’t developed enough. He uses his position near Ralph for the greater good.

Although I thought Sooni and her newspaperman fiance were sweet, I was sad to not see Ian happy — team Ian FTW! The maharajah and Sirene — what complicated, frustrating characters! I did enjoy Cynthia snarking the hell out of Sirene… “Hello! Please to be kissing my ass!” Sirene’s sari ensemble was so pretty!

Madeleine’s trajectory was interesting — watching her work behind the scenes to support Ralph, and then the eventual deal with the maharajah (shudder)! Madeleine does what she has to do.

And finally, it was fun to see Leena get all spiffed up — on the other hand, while it was certainly understandable that once she took the fall for Adam she was gone, it was weird to have such an important character just disappear mid-season! Leena takes one for the team.

As I mentioned in my preview, the fashion show was definitely the highlight from a costume angle: Alice giving a big “fuck you” to her husband.

What did you think of Indian Summers season 2? Are you sad there won’t be more?