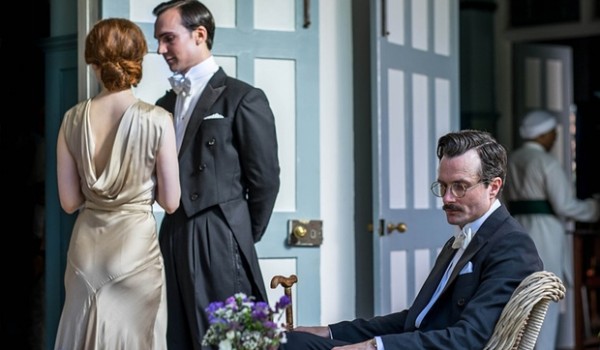 I’m excited enough about Indian Summers (now airing in the US on PBS) that I’ve decided to write a costume recap for each episode, so we can dish about what we liked and didn’t like. Keep your eyes peeled each Friday for a new post, and check out our recap of episodes one and two!

Indian Summers episode 3 just didn’t seem to have enough interesting costumes to make it worthy of its own post, so I decided to combine 3 and 4. Let’s do this!

Aafrin and Ralph in suits. Note how Ralph’s shirt collar points are longer, and his fabric is finer.

Later, we see Aafrin without his coat. I just loved his high 1930s pants waistline!

There are so many beautiful saris in this show! Here’s Sooni, about to get into some political trouble, in pink:

An Indian nationalist gives a stirring speech, leading to Sooni’s arrest. Her white and gold sari is worn over a long-sleeved choli top:

Ian meets up with Ramu Sood, who’s just trying to get Ian’s uncle to pay his debts. I have decided that Ramu looks like George Clooney, and I am IN LOVE:

SAY HELLO TO MY NEW BOYFRIEND!

Cynthia is all about knowing everything about everyone and exerting her subtle influence. She tries to put the heavy on Alice while wearing a dark blue blouse and print skirt. Meanwhile, Alice is in a sleeveless white blouse and lighter blue skirt (while baby is in the lightest blue of all — questionable, innocent, innocenter?):

Notice that random-extra-in-pink’s dress buttons up the back. Back closure on dresses was very common in the 19th century and continued to hang around through the 1960s.

Love the contrast patterned fabric used for the neckline/sleeve binding and the center buttons.

Alice sticks with the same outfit when she goes to volunteer at Dougie and Leena’s school. Leena too is wearing blue — initially distrustful of Alice, she softens to her. Does the color match indicate they’re going to become friends?

Dougie tries to confess his Leena situation to Sarah, who’s hearing none of it. She’s in the same print dress she wore to tea at Alice’s house. Starting with this scene, Sarah seems to re-wear her wardrobe more often than other English characters — clearly she doesn’t have the same amount of money.

Hey Sarah, at least he put a jacket on for ya!

Aafrin gets ready for tea at Alice and Ralph’s. This may be the first time we’ve seen his youngest sister, Shamshad, in Indian clothing (she’s usually in her English-style school uniform):

At tea, Alice is re-wearing her white/grey/yellow blouse, Aafrin is in full suit and tie, while Ralph is relaxing sans jacket:

Ralph asks Aafrin to draw Madeleine, who is firmly committed to her silvery gold color palette — but look, TROUSERS!

All of the characters come together for a fair at the Royal Simla Club. Cynthia looks fabulous-as-all-get-out in a print and solid outfit in strong reds:

Aafrin is in his same old suit, while Alice is in a printed dress that buttons up the back:

While Ralph and Madeleine bring the glamour (okay, Madeline is re-wearing her dress and earrings from the polo match, but she’s added a fabulous wide-brimmed hat):

Lots of great saris on extras — the print on this one is amaze-balls:

Dougie, Leena, and Adam try to be a family unit:

Dougie is clearly on strike against the tie.

But Sarah (re-wearing her polo match dress) is having none of it:

Ramu is there, looking dapper as hell, especially compared to sloppy Armitage:

And later, when Alice and Aafrin (separately) have to testify about the shooting, she wears a very formal, very snooze-y suit — but with her hair down again. The hell?

Maybe the gloves make it hard to use hairpins?

“Poor” Ralphie just wants to have his shag and get to work in his lovely suit, but Eugene has suddenly decided to draw the line on the whole shag-my-sister thing.

Sticking with the bow tie. What do you expect from someone named Eugene?

“I’m sorry, I was too busy being post-coital, did someone mention my name?”

Because guess who’s coming to dinner? That’s right, your old pal the viceroy!

Mr. Viceroy and Ralph are on the same wavelength, sartorially, even if the Viceroy is going old-school with the cravat:

Both in navy blue suits, both in burgundy neckwear.

Meanwhile back at the Dalal’s house, I am struck by how much Sooni and mom dress alike. It’s interesting, given how different they are politically. This time, they’re both in cholis (I assume?) that would totally work as 1930s dresses: Cynthia and Ian show up to wave Armitage good-bye as he hopes to return to Scotland in order to recover from his heart attack. Cynthia is in a gorgeous dark red:

Although that is not a great silhouette on anyone.

Meanwhile, it’s time for the boys to get their golf on, complete with plus-fours and fabulous socks!

RALPH’S SOCKS. Poor Aafrin has to wear his one good suit.

Even the Viceroy gets in on the plus-four action, although he is clearly less into Fun Socks.

Ralph convinces Madeleine to stay in India, at least for now. She’s re-wearing her polka-dot outfit from episode 2.

I’m getting ready for some variation on Madeline’s hairstyle…

Nice to see how the blouse buttons up the back.

Aafrin is pumped because he’s getting a new suit made!

Giving us a chance to check out his guns. Thank you!

Post-golfing, Ralph and the Viceroy are two peas in a pod:

Meanwhile Sarah invites Alice over for tea and a little blackmail. Notice how much their dresses align. An interesting contrast to Alice and Leena’s walk of perhaps-friendship in episode 3:

“So what would you say if I told you that I’m an insecure mega-bitch?” A better shot of the dress that Alice is wearing.

Cynthia is having NONE of Ramu Sood being a decent, hard-working guy. That’s one racist chin:

Post-blackmail, post-Leena confession, Sarah puts on her come-hither nightgown and gives Dougie her best serial killer, “you will shag me” stare of DOOM:

“It puts the lotion on its skin.”

This is the face of a man who is about to do something he REALLY doesn’t want to do.

But who cares, it’s Party Like You’re the Viceroy time! All the gents are in white tie:

Madeleine rocks it in a pale gold, slinky number, with a great drape in back (see the image at the top of this post) — and does The Best Curtsey in the Whole World:

“Why yes, I WOULD make a damn fine duchess.”

Alice is wearing a long, floral party dress with sheer godets in the skirt: Side note: check out that stripey dress on the extra on the left. I can’t find a screenshot of it, but it was NICE.

Aafrin shows up in his brand new suit, and just as I was thinking, “Damn, he looks SWANK” — all the guests see him arrive and LAUGH AT HIM because they are assholes (and, ostensibly, because Aafrin is not in white tie. Assholes).

Dinner ensues, during which I can’t stop checking out Madeleine’s breasts: Madeleine helps out by lounging on the piano. As one does.

All sorts of complex shenanigans ensue, then after dinner, Ralph and Aafrin have a heart to heart — Ralph in opened tie and collar, Aafrin still buttoned up. It’s clear what the power dynamic is in this relationship:

And finally, in the early hours of dawn, Ralph takes Madeleine for a horse ride that looks straight out of Avatar, so that he can ask her An Important Question:

“Do you think this shirt makes me look fat?”