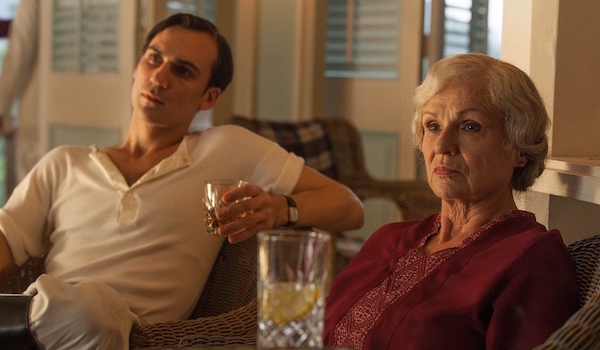 I’m excited enough about Indian Summers (now airing in the US on PBS) that I’ve decided to write a costume recap for each episode, so we can dish about what we liked and didn’t like. Keep your eyes peeled each Friday for a new post, and check out our recap of episode one!

In this, the second episode, we’re given a lot more clues to the many secrets lurking in 1930s Simla, India. And more clothes!

We start off with Madeleine in a beautiful silvery silk robe. This color seems to be Her Thing, and she sticks with throughout the episode. It’s a very “modern” (in the deco sense), urban color palette to me, and very different from all the other female characters. 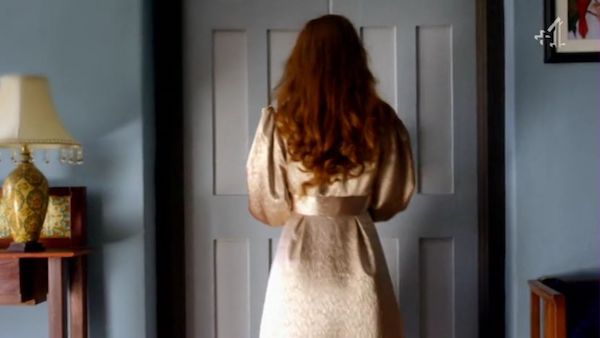 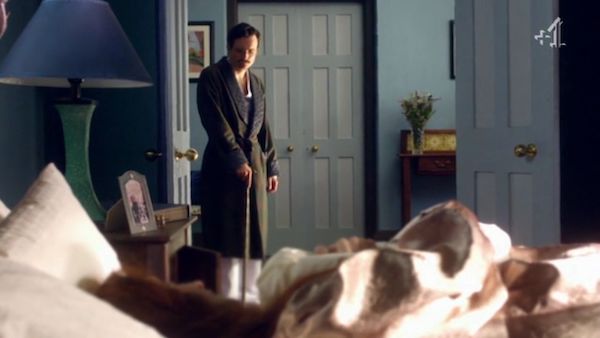 Alice spends most of the episode in this ensemble: pale white/grey/yellow print blouse, and cream linen skirt. Compared to Madeleine, she’s very naturalistic. I love the godet insets on her skirt. My one annoyance was that she wore her hair down for most of the day, even when going out. Clearly she’s supposed to look more informal, but I question the appropriateness of the hair. 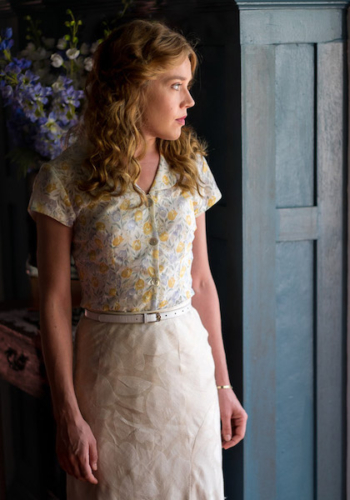 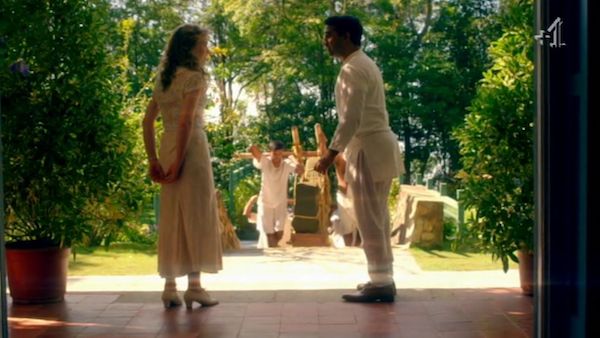 Cynthia is so obviously keeping an eye on everyone that she literally is watching them with binoculars, while wearing a fabulous embroidered red kimono-style robe: 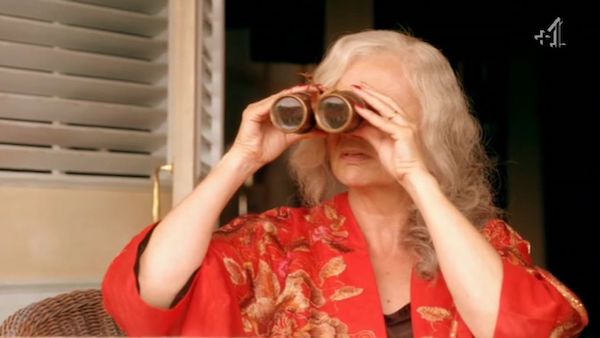 And Afrin’s family embodies clothing code-switching, with youngest sister Shamshad in a British-style school uniform, while mother Roshana and older sister Sooni are in saris: 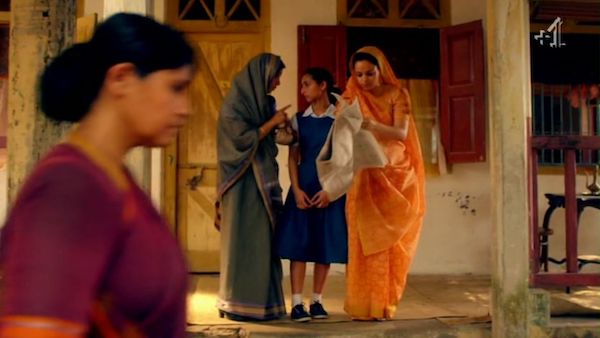 I’m very much not an expert in Indian clothing history, but I thought it was interesting that both Sooni and Roshana have choli tops with puffed sleeves. I’m used to seeing modern-day cholis with fitted sleeves, but the puff is an interesting nod towards 1930s Western fashion styles. 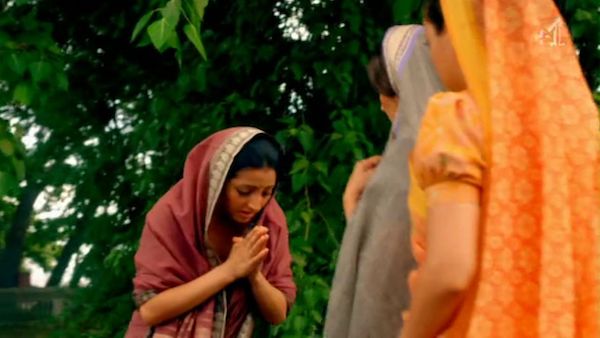 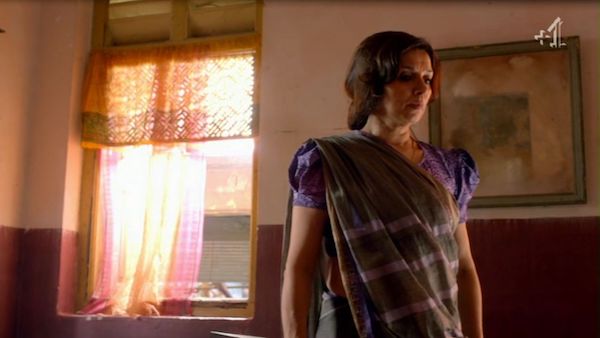 Roshana’s sleeves also have that puff.

Ralph spends a lot of this episode stressed, trying to handle an exploding situation. He does it in a beautiful cream three-piece suit. I love the long collar points, and the wide lapels on the suit jacket — both are 1930s to a T: 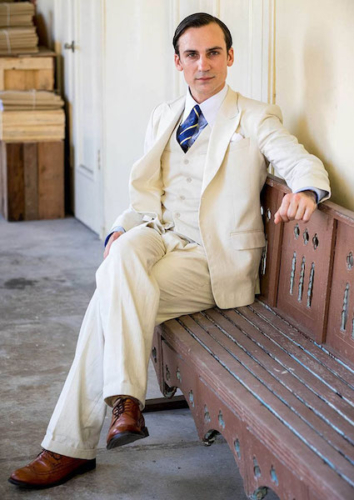 Compare Ralph’s super-sharp look with Eugene, whose bow-tied ensemble just reads Col. Sanders to me. I’m still unclear on his character, but my visual read is that he’s not the least bit suave, despite being rich: 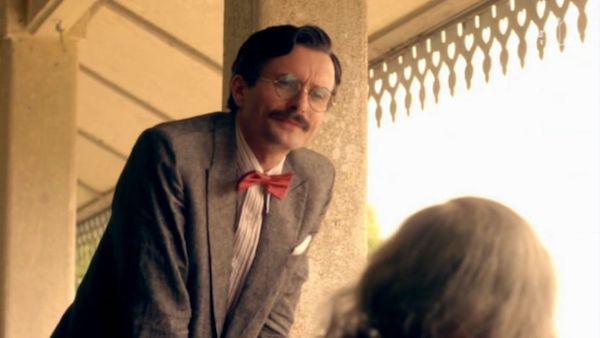 I didn’t mention tea baron Stafford Armitage or his nephew, Ian, in my last recap, mostly because they weren’t wearing anything really remarkable. This time, Armitage (a serious alcoholic) continues his country bumpkin look: 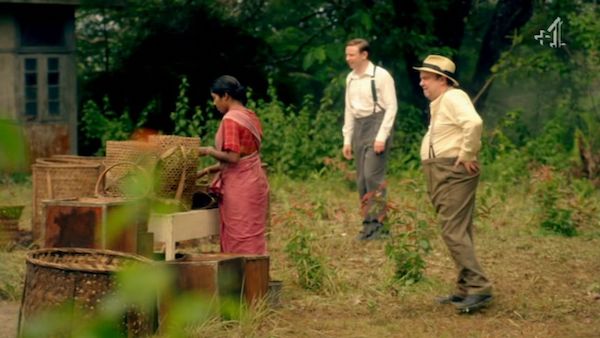 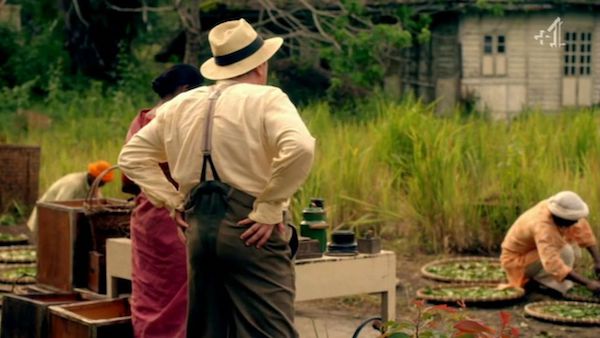 I particularly liked the detail on Armitage’s pants. Notice how they’ve been let out at the center back, by adding a panel of different colored material. Clearly not a guy who spends much on clothes!

Armitage is contrasted with clearly well-off, and very English assimilated, neighbor Ramu Sood. Armitage clearly thinks he’s high above Sood just by virtue of being English, despite owing him money and Sood being dapper as all get-out. 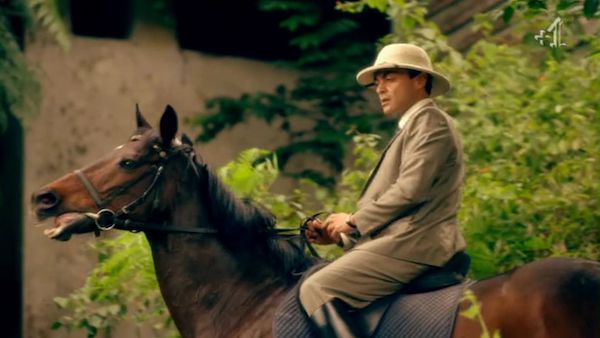 Meanwhile, back at Ralph and Alice’s palatial home, Alice and Madeleine get a visit from Sarah and Dougie. Here’s Madeleine in another example of her pewter look: 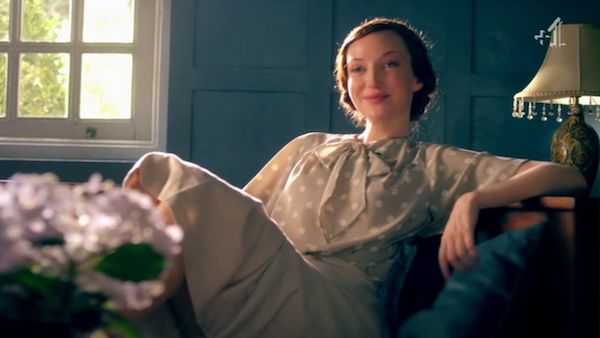 While Sarah and Alice are in delicate floral prints on white backgrounds: 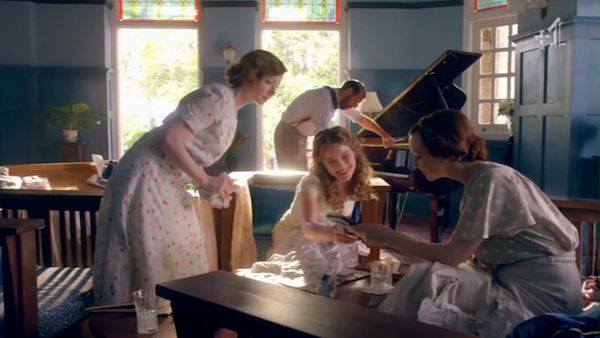 Alice decides to check in on Aafrin, and throws a camel-colored shawl over her hair: 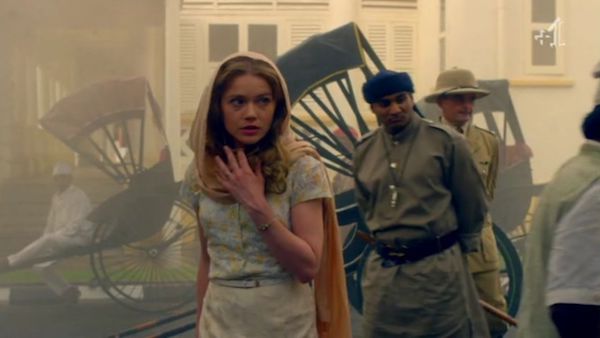 She visits Aafrin’s family, spilling the beans to father Darius that Aafrin has been shot. So far, Darius has been wearing traditional Indian clothing: 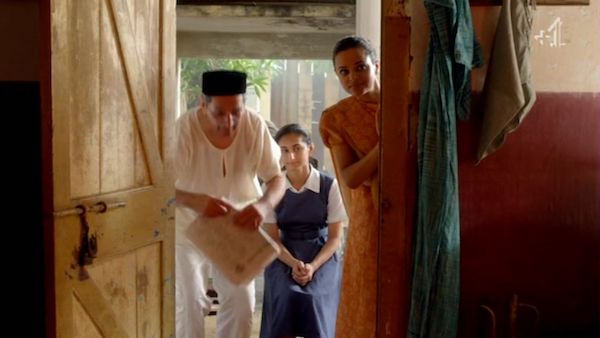 But now that’s off to the English hospital to visit his son, there’s a scene of him dressing in Western-style clothes, including a shirt and tie: 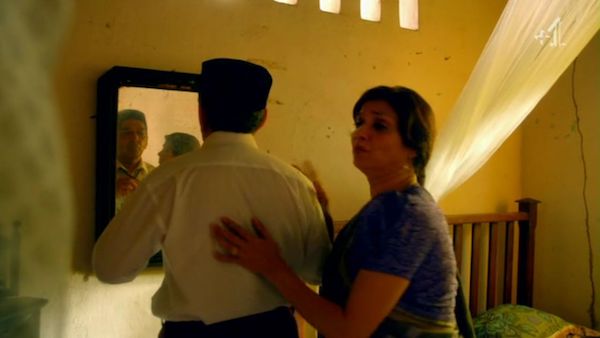 During all of this, we find out that Leena works at a missionary school along with Dougie. Adam, the rescued boy, has run away. Leena spends most of the episode searching for him while wearing the same sari as in episode one. I couldn’t get a screenshot of it, but when she finally finds Adam and hugs him, you can see a split in the shoulder seam of her choli top. Clearly, Leena does not have money for clothes! 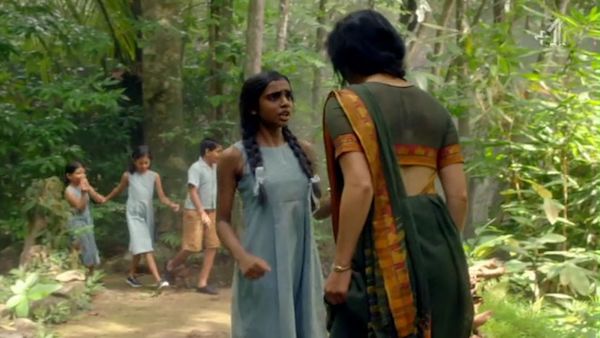 Sarah tries to get closer to Dougie, who deflects her with a trip to the polo grounds at the Royal Simla Club. Sarah wears a blue plaid windowpane-print dress, with pleated edging and lace inset: 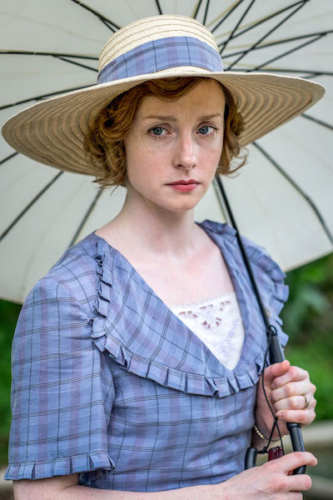 And Dougie is clearly trying to placate his wife by dressing up for the occasion. This is the first time we’ve seen him in a jacket: 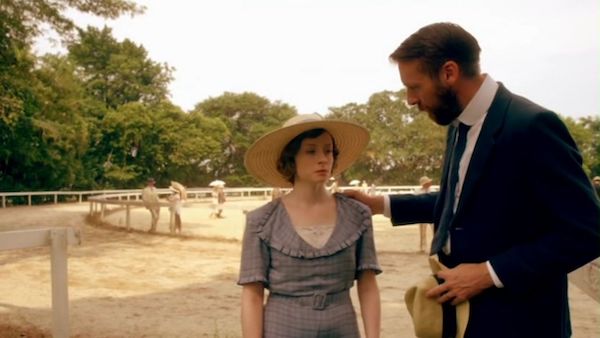 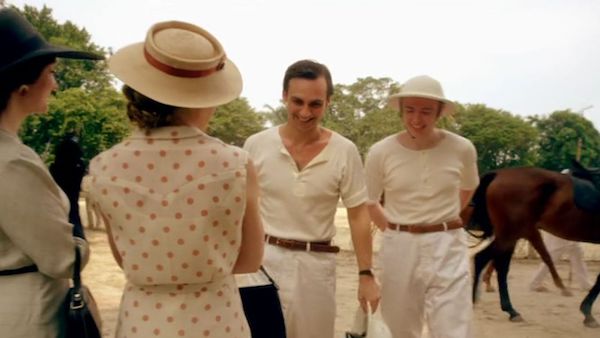 After the game, there’s dancing at the club. Madeleine sticks with her pewter palette, this time in what on close inspection turns out to be a black and white windowpane-patterned dress with great shoulder button details: 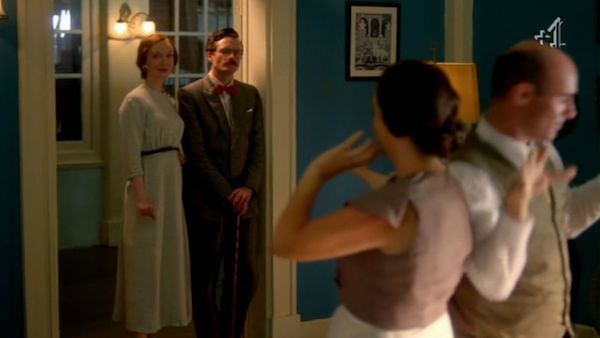 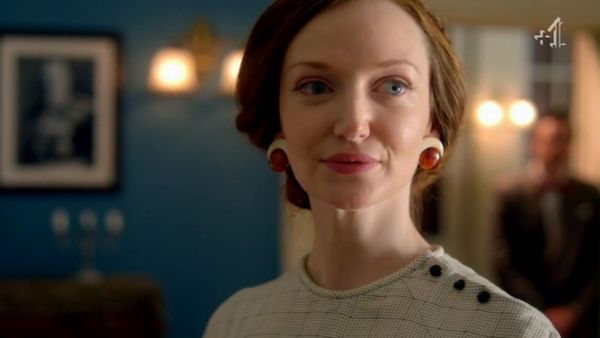 Later, she seduces Ralph in a slinky, bias-cut, silk charmeuse nightgown that is all 1930s glamour. The color is slightly more towards cream, but it’s still in her pewter palette: 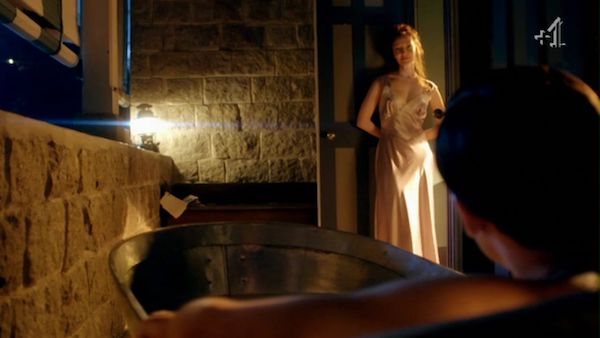 Finally, Aafrin sees Alice in some kind of dream sequence, where she’s wearing the same linen skirt as above, but this time with a solid white blouse: 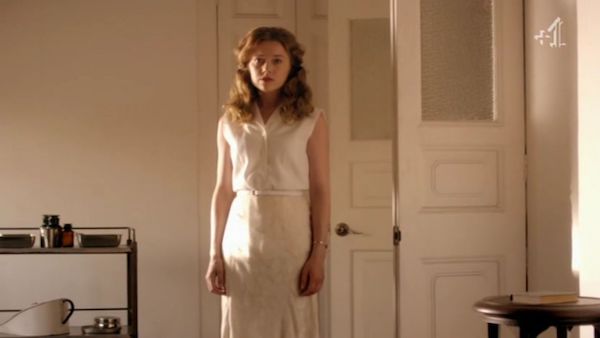 And Dougie is off to his school in yet another jacket, while Sarah gets left at home in the pink dress she wore in episode one: 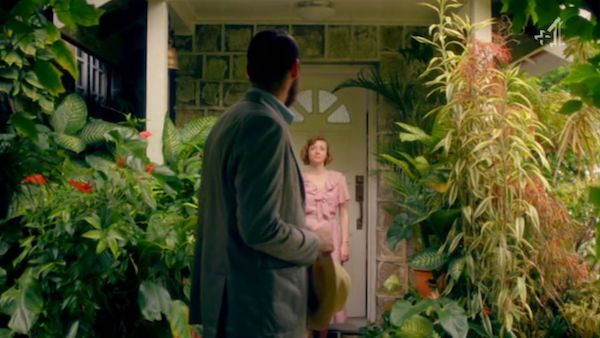 What did you think of episode two’s costumes?