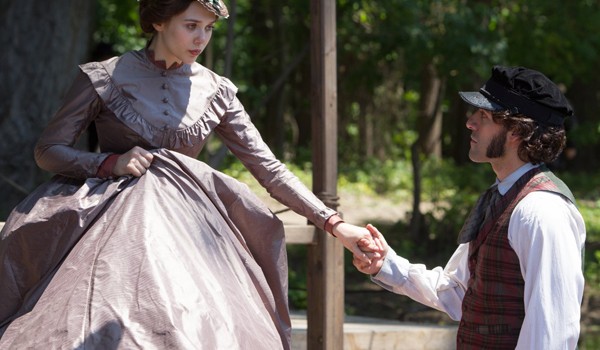 Sometimes you see a historical costume movie on Netflix that you’ve never heard of before. And soon after starting to watch, you realize why you didn’t hear about this one — it sucks. It’s slow, meandering, dark, and depressing. I’m a goth, I can enjoy dark movies, but In Secret (2013) isn’t just dark, it’s dull from the very start.

The premise is of an orphaned girl, Thérèse Raquin (played by Elizabeth Olsen), who’s taken in by distant relatives, a stern mother (played by Jessica Lange) and her sickly son Camille (played by Tom Felton, aka Draco Malfoy, who I fear is getting typecast as baddies; see also his role in Belle, 2013). The mess is set in the 1860s France, first the countryside and then Paris, and is based on a novel by Émile Zola. I struggled through the whole damn thing, and all I found redeeming was about 30 minutes in the middle where Thérèse strikes up a hot, hot, hot affair with an artist, Laurent (Oscar Isaac). Starting at 25 minutes in and lasting until the 55 minute mark, they engage in a series of both steamy and realistic historical-costume sex scenes. What makes this especially good for me is how the two are getting it on IN and AROUND their period clothing. Camille’s mother embroiders this early in the film. Hint?

Too often, historical costume movies have quick-strip scenes or otherwise cut to nudity and avoid the obvious issue of how people actually did the deed when they were wearing at least three to five layers of restrictive clothing on a regular basis. As a historical reenactor who has worn skin-out period clothing for the 16th through 19th centuries, I know you don’t just drop drawers in a split second. But I also find it super-sexy to get around those layers creatively. And this movie does that! The shagging starts 25 minutes into the flick.

So, while I can’t recommend this movie for much, I can say fast-forward to these scenes between Thérèse and Laurent…

1. Steaming Up the Window Sex

For their first encounter, Thérèse and Laurent do it in her mother-in-law’s shop, in front of street window, after closing time. This one’s just a tasty preview to get things started.

2. Under the Crinoline Sex

This is the real deal. Laurent gets hands-on underneath Thérèse’s crinoline. You know that split-crotch drawers are standard-issue for the 19th century, right? The looks on their faces…

So often in historical costume movies and TV shows, women will rip off their corsets for sex (or men will rip them off the women). Which a) takes longer than you think, b) when done hastily, can damage a corset, c) isn’t necessary for straight-up shagging. Thus, Thérèse and Laurent go at it without bothering to remove her corset. Heck, she leaves on her petticoat too. So much more convenient when you’re cheating on your husband, in your marital bed, upstairs from your mother-in-law’s shop, while said MIL is downstairs.

4. Up Against the Wall Sex

A classic, but here shown with Thérèse almost completely dressed (only her gown’s bodice was removed) and Laurent’s shirt and waistcoat on. I think his trousers are around his ankles too.

5. Sex on the Floor With the Cat Watching

Because why kick the kitty out of the room? Not like Puss is gonna rat Thérèse out to hubby and the mother-in-law.

6. Sex Under the Crinoline With Her MIL Giving Her a Neck Massage

Thérèse and Laurent are canoodling upstairs where she’s been pretending to have a headache. Her mother-in-law comes up the stairs offering tea and sympathy. What do the lovers do? Hide Laurent underneath Thérèse’s crinoline, of course. Yes, that makes perfect sense — if this was a Three’s Company episode, LOL! And the scene gets more hilarious when the MIL won’t leave and offers to massage Thérèse’s neck and sing her a song. So what does Laurent do to pass the time while he’s down there? Something very distracting. He certainly gets a reaction out of Thérèse.

7. Outdoor Sex With Her Husband Asleep in Her Lap

Because Laurent can’t help but cop a feel, even though Thérèse’s pasty little hubby has fallen asleep in her lap after walking around the park for 10 minutes. The lovers are only interrupted from going farther because the family’s friends stumble upon them.

Thérèse and Laurent only get one more hot sex scene after they kill Camille (spoiler alert! but so what?), however them getting married entirely kills their passion. The rest of the movie is bickering and boozing, and finally, everyone dies. The end. Did Émile Zola think marriage was the end of sex? Or is it just this movie?