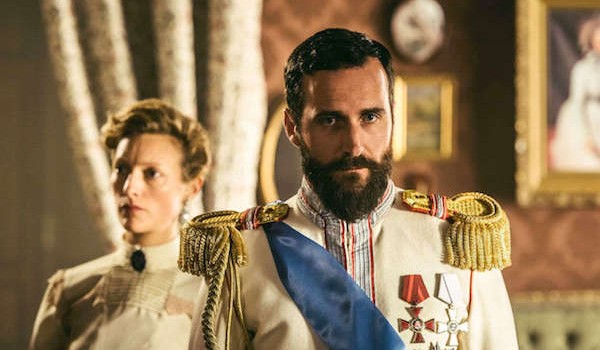 I knew I was going to need to watch Netflix’s docu-drama, The Last Czars (2019), about Russian Tsar Nicholas II, Tsarina Alexandra, and their five children/the end of the Romanov dynasty, when I read Jezebel’s review, titled, “The Last Czars: What If You Crossed the History Channel with Cinemax?” This sucker starts off with the funeral of Tsar Alexander III, rotting in his coffin, in 1894, and takes off running through the Russian Revolution in 1917. Of course, I had a lot of questions while I was watching, as I am wont to do, so I thought maybe you could help me?

Note: spoilers galore! (Of course, there are no spoilers in history…)

Why is The Last Czars framed around Anastasia, when we know she died with her family? 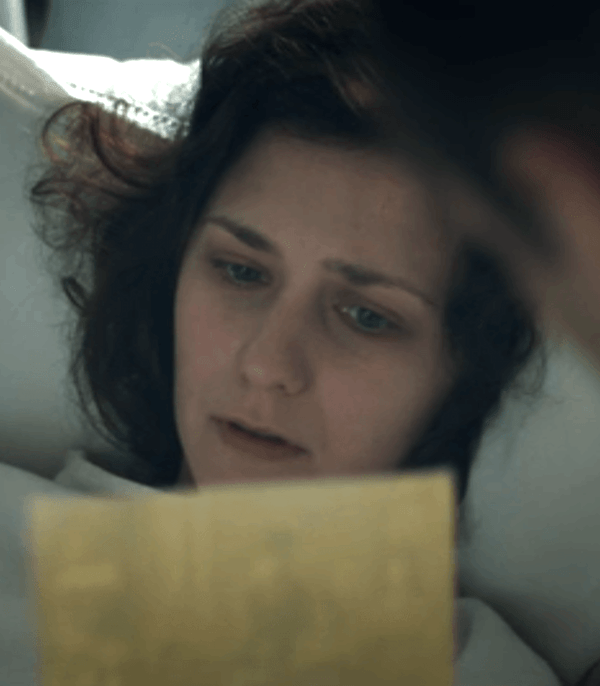 Okay, okay, so it’s one of those legendary mysteries that can still hook audiences (see: the animated movie, and the Broadway musical that’s just getting under way based on it). And sure, I was pretty obsessed with this same mystery when I was a kid! But people, THEY’VE DONE DNA TESTING. ON ALL THE BODIES. ALL OF WHICH HAVE BEEN FOUND. So don’t leave us with the French tutor telling us via cheesy voiceover narration that he’s decided she’s not the real Anastasia. How about, I don’t know, ONE OF YOUR TALKING-HEAD HISTORIANS ACTUALLY POP IN AND REMIND US ABOUT THE DNA?? (See my review of Anastasia: The Mystery of Anna for more).

Why is Rasputin relatively clean?

First, let’s all listen to Sarah’s favorite, “Rasputin” by Boney M, so you can join me in the ear worm:

I know Rasputin is that conundrum of a guy who’s completely repulsive until you meet him and are drawn in personally, but I wasn’t buying this guy. Jezebel calls him a low-rent Gerard Butler, and I feel like that does low-rent a disservice. 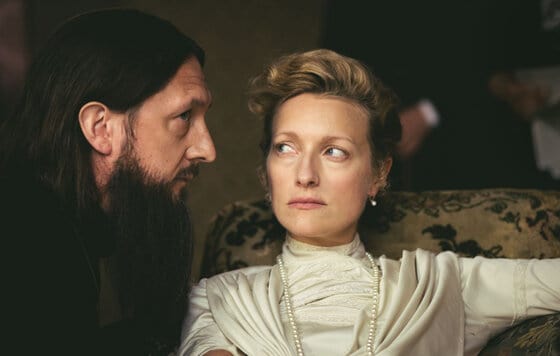 Side-eye him, Alexandra. I sure am.

Wouldn’t Peasant Dad notice if you were shagging his daughter in the same room?

So Rasputin shows up at some rando peasant house and asks to stay the night, making eyes at Peasant Daughter. Cut to night, she’s sleeping on the floor of what looks like the main room, and so is Rasputin, a couple feet away. A few more hot glances and she’s in bed with Raspy while he fingers her. There’s no way the two of them would be left to sleep in the same room, opposite sides of the room or not. Where’s Peasant Dad with an axe when you need him?

Why don’t the adult actors age? 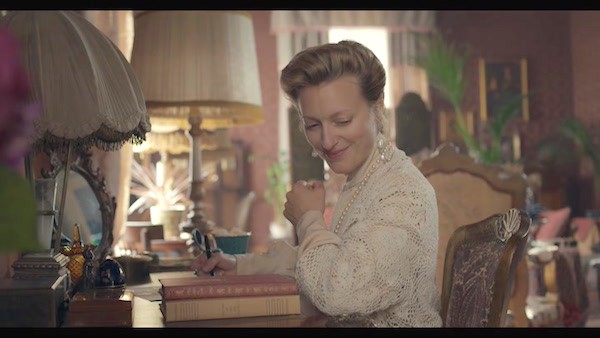 She bathes in the blood of virgins?

Here’s Nicholas and Alexandra getting engaged in 1894: 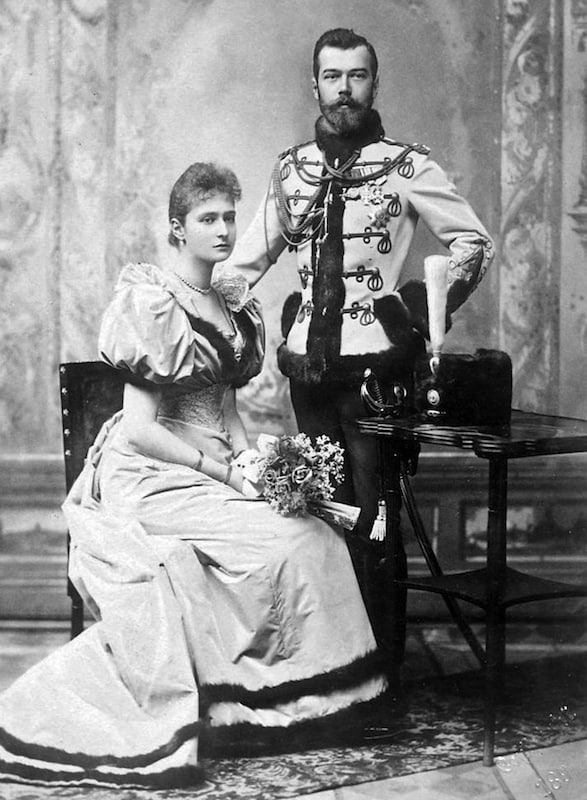 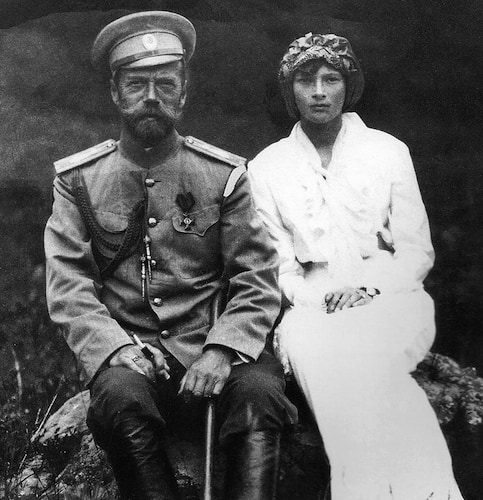 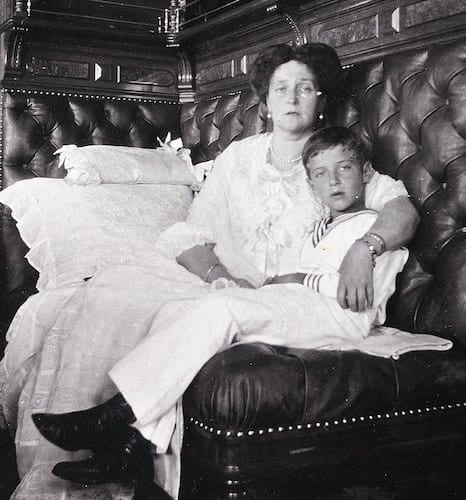 Tsarina Alexandra and Tsarevich Alexei in a stateroom aboard the Imperial Yacht Standart, c. 1911, Beinecke Library

It makes it REALLY HARD to believe your lead couple is incapable of having more children when they look as fresh-faced as they did on their wedding day. Ya can’t throw a little frost at the temples?? 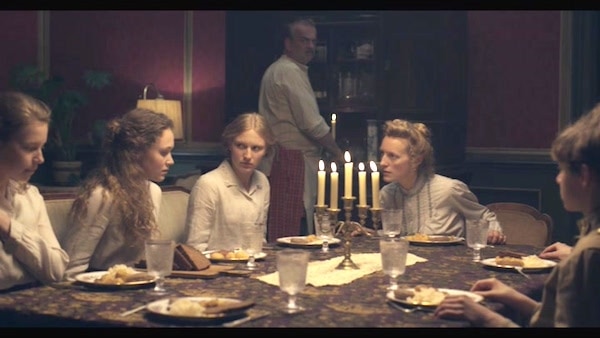 Why is that one historian so excited? 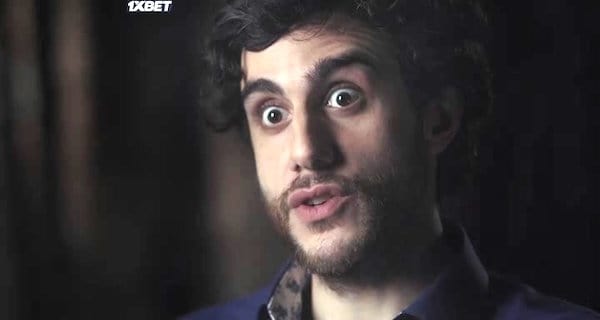 Okay, so I’d be stoked too if I was asked to talk about a nerdy historical subject in a documentary. But I still enjoyed watching his eyebrows dance!

Why isn’t this just straight drama instead of a docu-drama?

Probably this show’s biggest flaw is that it’s not sure if what it wants to be. In some ways, I enjoyed adding the documentary aspect to the drama — productions like this always have a “show, don’t tell” problem, so instead of having your scriptwriters try to find an awkward way to convey the way things were received, having an expert TELL me was refreshing! However, they don’t introduce the historians until way too late — I thought maybe I had misread and it was indeed straight drama until 15-20 minutes in. And then they don’t contextualize certain things, especially the vintage film footage — I really wanted to know if I was seeing footage of the real event or just something that looked like it. And, of course, it’s really weird to go from a serious discussion of Russian politics to Rasputin getting a blow job.

Why is Empress Alexandra wearing an 1870s bustle gown to her coronation party in 1896? 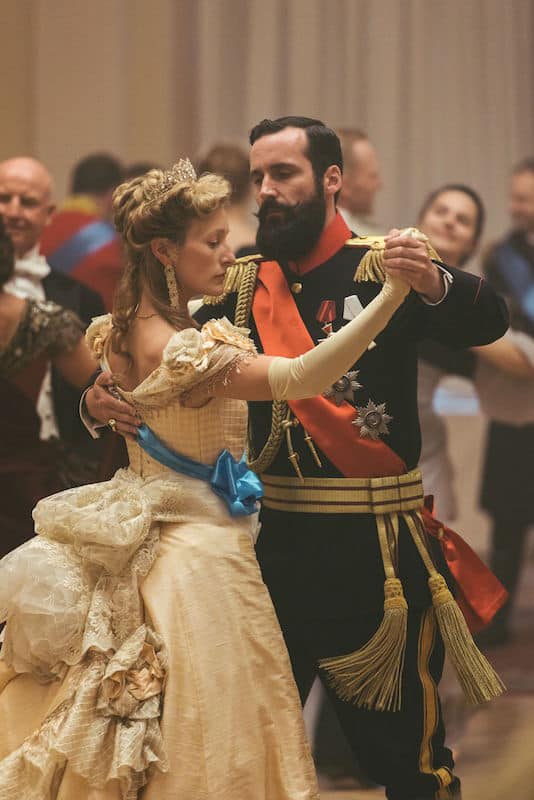 Nicholas and Alexandra — married and crowned: 1894. If I were being generous, I’d say that’s a late 1880s bustle gown, but it’s really 1870s given the soft floofy back (1880s bustles were super angular). 1890s was all about big puffy sleeves and full, A-line skirts. Not bustles. 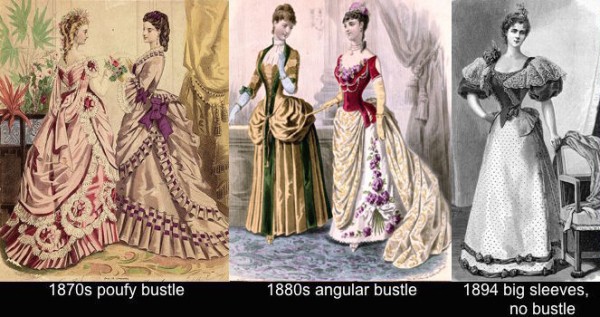 The costumes for this sucker were designed by Barbara Elum-Baldres, who has designed various productions I’ve never heard of and worked as costume assistant on Alice Through the Looking Glass. She told Broadcastnow.co.uk,

As costume designer, the most important technical challenge was to be loyal to the story of the last Romanovs and bring the fantasy and romanticism that surrounded this family to life, as authentically as possible.

I was inspired by Russian folklore and the European fashion of the time. I managed to get a great deal with one of the best costume houses in Madrid, which let me alter dresses that had previously been used in drama set in the same period.

This allowed me to recreate the Russian court dresses, which are really specific – in particular, Alexandra Romanov’s wedding dress.

I took a copy of a 17th-century dress, altered the corset, added an extra skirt and created new sleeves. 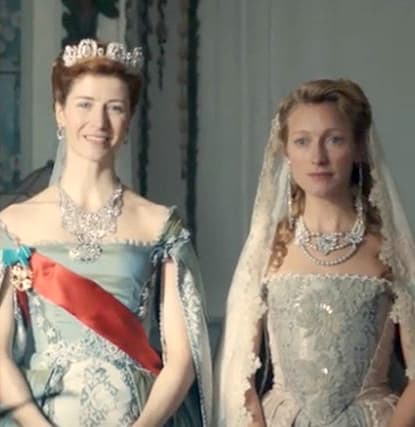 The biggest challenge was finding fabric from the period. One day, one of my assistants showed me a picture of her living room in Vilnius. Her curtains were exactly the right fabric and colour for the task. I convinced her to sell them to me and we were able to complete Alexandra’s dress.

After that, I realised buying bed linen and curtains from Vilnius and Madrid was a great way to get more metres for my budget and I was able to recreate a lot of dresses that way.

We also altered clothes from flea markets, which worked perfectly for Russian peasant skirts and heavy knit pieces for the town revolutionaries.

One of my favourite dresses was for Alexandra: a cream and green early Edwardian dress that we created using a 1970s dressing gown found in a car boot sale.

I really want to figure out which dress was originally 1970s! Because I saw some suspiciously polyester-y dresses on Alexandra… 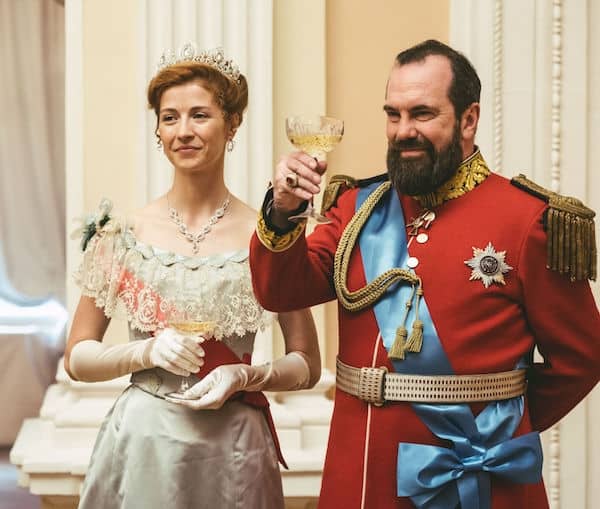 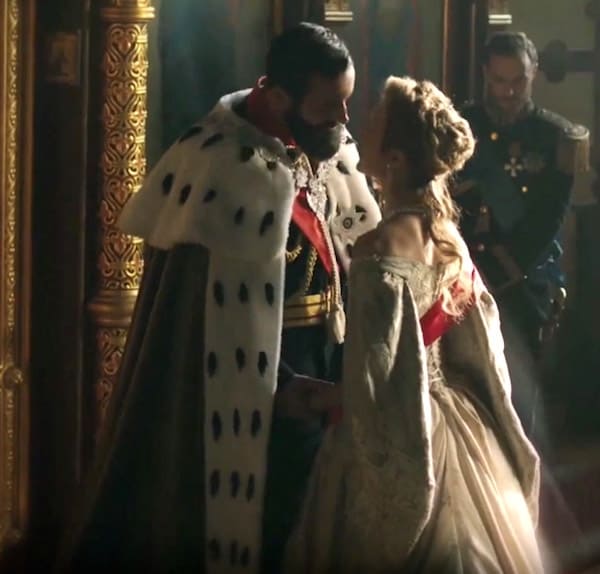 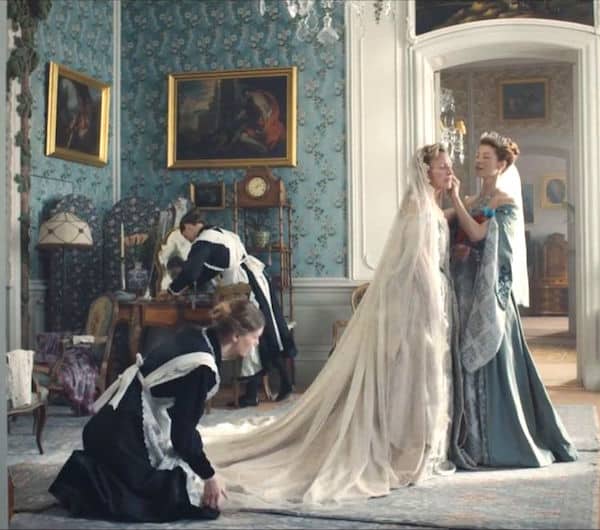 Where do I know the Empress Maria Feodorvna from? 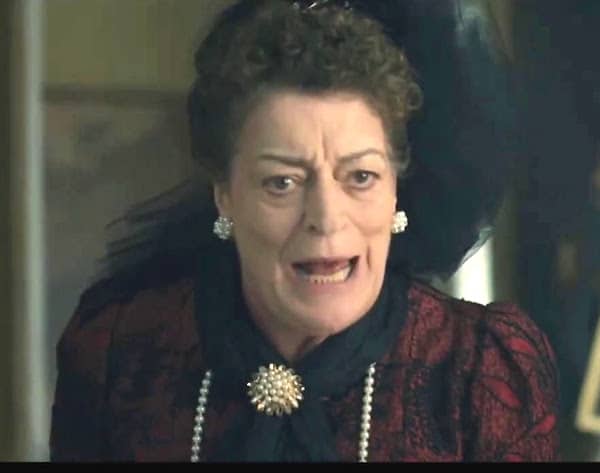 Or “Minnie,” as the show calls her.

Am I the only one who spends most movies/TV shows asking myself “WHERE DO I KNOW HIM/HER FROM??!!” That’s Bernice Stegers, who has been in many many productions including The Guernsey Literary and Potato Peel Pie Society, Suite Française, Great Expectations, Tipping the Velvet, and Quartet.

If you’re going to do the full horror of the assassination, why not do it as it actually happened? 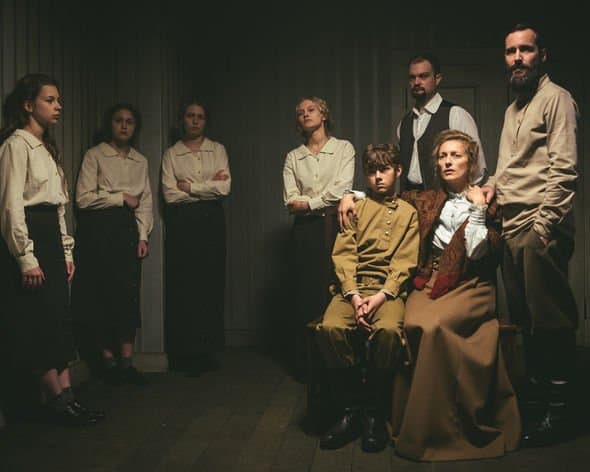 I’ll give them this, this show did one of the better portrayals of the actual assassination in that they tried to show the real horror. But they bungled the specifics. All the guards shot at Nicholas instead of anyone else, wanting the honor of having killed the tsar, which meant the rest of his family DID watch him die (but not quite as shown on screen here). Then, the guards shot at everyone, and the room filled up with debris and smoke. Once THAT cleared, they found the daughters were totally uninjured, screaming and crouching against the wall. They shot them repeatedly, then had to bludgeon them to death because of the jewels sewn into the clothes. Nicholas II was 1000% an inept ruler, but he wasn’t evil, so I’m glad they at least attempted to show how horrific this assassination was. But why not do it right, if you’re gonna do it?

Did I need to see Empress Alexandra’s nipple in close-up? 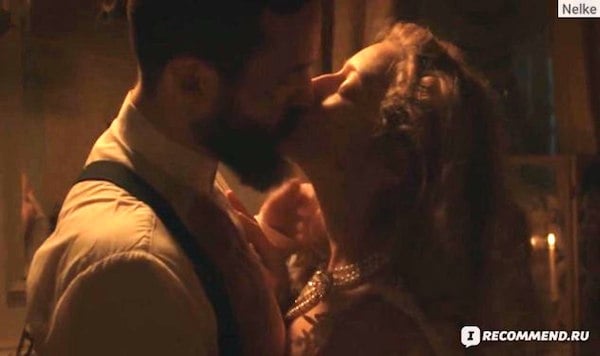 I am sparing you said close up. You’re welcome.

This is probably the central question that will have me forever awake at night, eyes wide open in terror. We here at Frock Flicks are down with the sexytimes. But, let’s keep those sexytimes to people who you can relatively picture as sexual beings. Yes, Nicholas and Alexandra were a love match. And I can even handle them shagging (although not, dear god, butt naked on the dining room floor; although, nice ass Nicki!). BUT I DO NOT NEED TO SEE (the actress playing, but still) EMPRESS ALEXANDRA’S NIPPLE IN CLOSE UP. 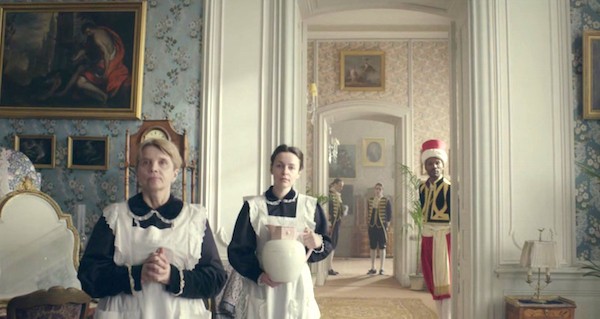 We’re all waiting for the dining room shagging to end, trust me.

Have you watched the crazy that is The Last Czars yet?