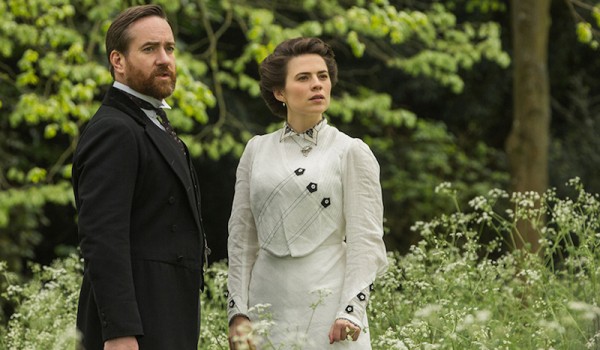 Yeah, I went ahead and did it, I watched the 2018 remake of Howards End. I didn’t totally hate it, but still I’m not totally onboard for needing this version either. If, like me, you believe the 1992 Merchant-Ivory film was amazing and life-changing, you don’t need to bother with this four-hour TV miniseries. But then, you probably don’t run a blog about historical costume in movies and TV, do you? 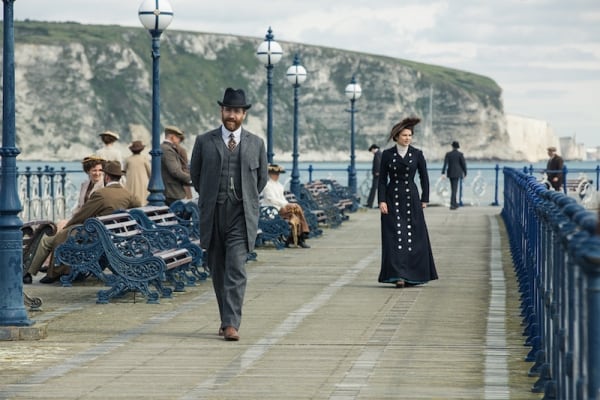 Yes, that coat on Hayley Atwell is recycled from Far From the Madding Crowd (2015).

I will say that the longer format of this adaption means it covers every last thing in the book that was condensed and compressed in the theatrical movie. It’s a very literal adaption in that respect, and if you’ve never seen the Merchant-Ivory film, yet have read E.M. Forster’s novel, you may appreciate this. But it will also depend on how you interpret and understand the meaning of the novel. I’ll also point out that being so precisely literal doesn’t mean this version necessarily reflects the warmth and fluidity of Forster’s words. There’s something cold and dreary in the cinematography and staging, and the pacing overall is slow and plodding instead of languid. And then there’s the acting which is … unsubtle, to be charitable. 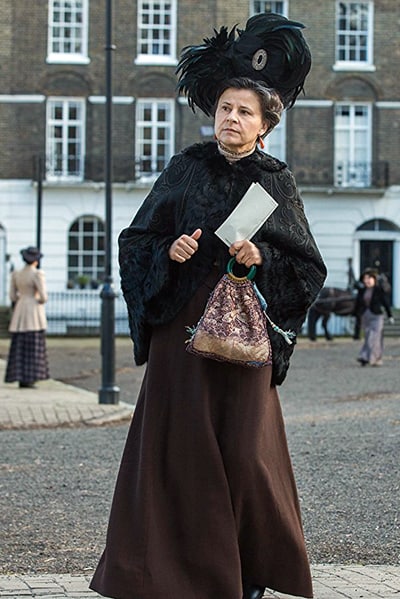 Tracey Ullman plays the Schlegels’ Aunt Juley, who is kind of a busybody, and wears the only interesting hats in the whole show.

See, E.M. Forster was a Victorian writing in the 20th century, edging into modernity with poetry, not force. His greatest works tackled topics such as class, sex, and race not with sweeping pronouncements on how Things Should Be but with nuanced reflections on how societal change might affect interpersonal interactions for good and ill.

At the heart of this lack of subtlety is the character of Margaret Schlegel, as written by Kenneth Lonergan and portrayed by Hayley Atwell. Yes, Forster’s words are there, but rearranged to shortchange the character, IMO. She becomes harshly pragmatic, caught between her shallow talk of social justice and her cravings for life’s comforts. Margaret pushes herself into friendship with Mrs. Wilcox and then is acquiescent to Henry Wilcox, as if her supposed free-thinking ways are just a pose that she’s happy to cast off when the right man comes along. Stripped of Emma Thompson’s sophisticated performance and Ruth Prawer Jhabvala’s elegant script, Margaret is merely a “hard” contrast to her “soft-hearted” sister Helen. 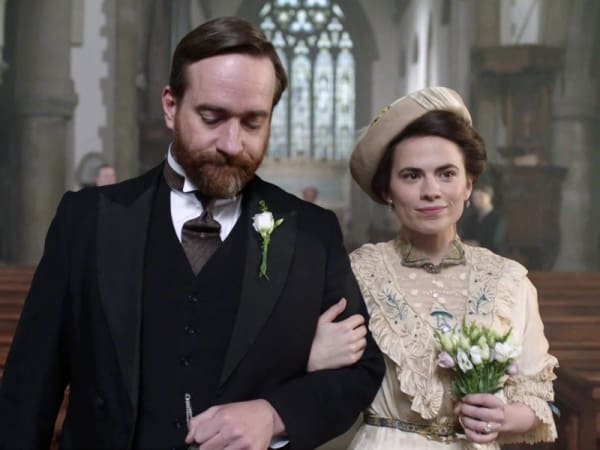 Another frustrating thing about this adaptation was what I can only guess is an attempt at color-blind casting. Jacky Bast (played by Rosalind Eleazar, who also plays Violet in Harlots) — lower-class Leonard Bast’s wife — is black, as is Annie, one of the maids at the Schlegels’ home, and at Margaret’s luncheon, she has two black female friends (unnamed, but one takes part in the lively conversation). Never is the fact that these women are black and living in a predominately white, mostly upper-class London society alluded to, which, in the early 1900s, would have been noticeable. For a novel that is VERY concerned with class and gender issues, to add but not discuss the intersection of race is odd. 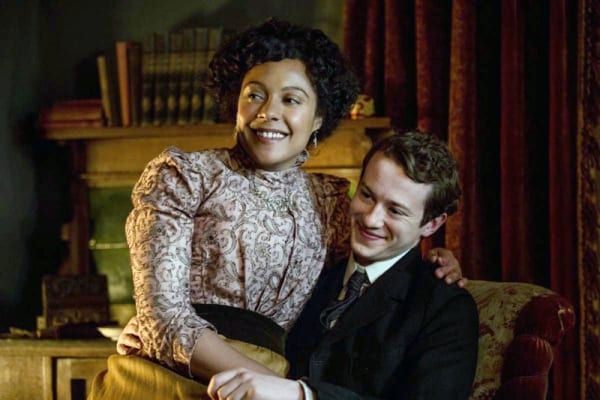 Jacky and Leonard Bast. Perhaps in the conversation about Leonard’s people disapproving of Jacky because she’s a ‘fallen woman,’ a nod to their interracial pairing being unusual (or not! or something!) could have been added. 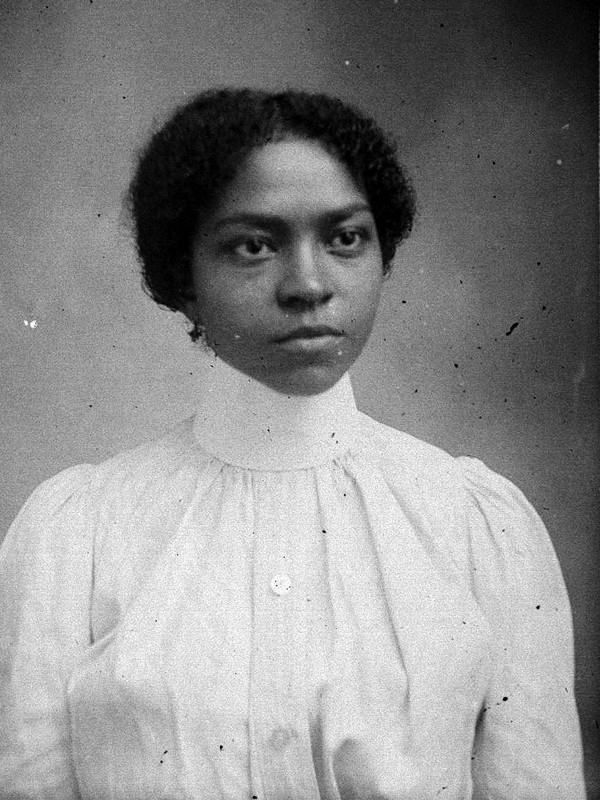 At least Jacky looked historically accurate, as this 1900s photo of an unnamed African-American woman shows (from the Duke University collection).

While the Schlegels are progressive types and could be expected to have a wide circle of friends, wouldn’t the upper-crust Wilcoxes be somewhat racist in the way of the times? For example, Charles Wilcox says, “Why be so polite to servants? They don’t understand it,” and that family doesn’t care much for the poor and the likes of Leonard Bast, so I rather expect they’d feel the same way about people of different races. But none of this is acknowledged in the 2018 Howards End, despite the casting.

While I was not impressed with the story of this new Howards End, I did find the costumes well-done and, in particular, I appreciated how costume designer Sheena Napier used the costumes to reflect the characters’ attitudes and emotional progression.

This is most obvious with Margaret Schlegel — where Hayley Atwell’s performance may be lacking, her wardrobe tries very hard! In episodes one, two, and three, before she marries Henry, she is mostly dressed in fitted blouses with a tie at the neck and long walking skirts. This is the uniform of the ‘New Woman’ of the 1890s-1910s, when a simple shirtwaist was often paired with a ‘tailor-made’ suit jacket (although no suits in this production).

The New Woman was something of an literary construct and a feminist ideal that started in 1890s writing such as that by Thomas Hardy, Sarah Grand, and Henry James. E.M. Forster was influenced by late Victorian socialist and feminist writers, so dressing Margaret in that style of an autonomous, foward-thinking ‘New Woman’ makes sense. However, as the middle episodes proceed, I felt that her severe blouse and tie were merely a costume to make it appear she’s more independent than she really is. 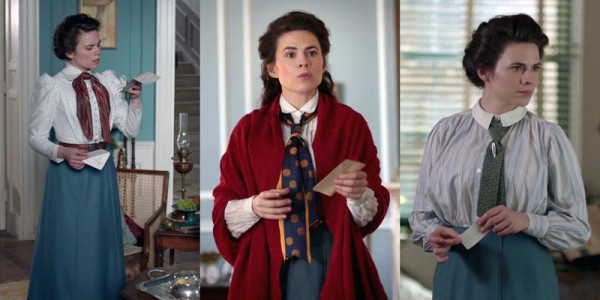 Margaret in the first two episodes, all shirts and ties (and often the same skirt).

The BBC production notes say Napier and the rest of the creative team were inspired by Edwardian-era street photographer Edward Linley Sambourne. His pictures of everyday women walking down the streets of London definitely relate to the costumes and look of the production. 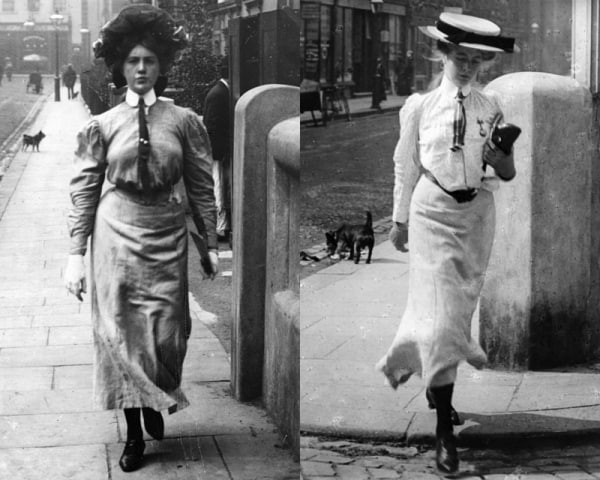 Helen Schlegel (played by Philippa Coulthard) is less severely dressed, being the more “bohemian” and impulsive sister. She wears blouses and walking skirts, but they are softer with more prints and ruffles and without ties until the confrontational scene at Evie Wilcox’s wedding. 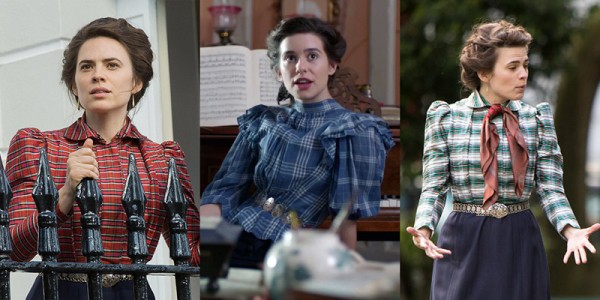 Both sisters wear plaid blouses, but Helen’s, center, is ruffled and loosely belted, while Margaret’s are more fitted. 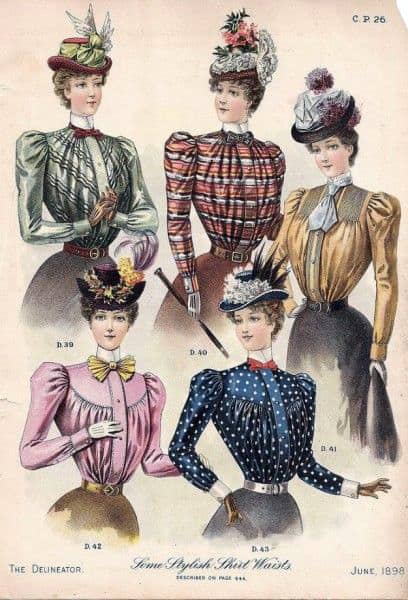 Fashion plate from The Delineator June 1898. Both plaids and dots show up in Howards End (2018) on Helen, while Margaret is all about the neckties. 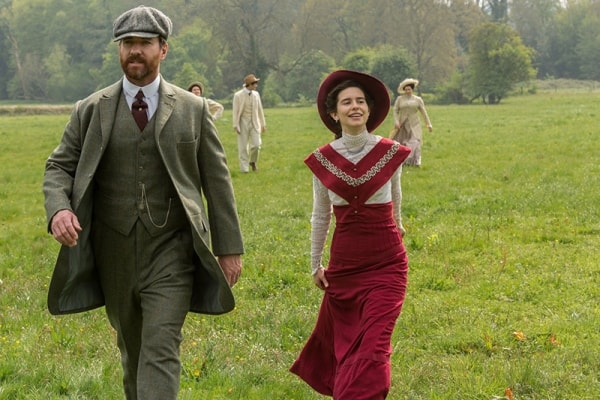 Reddish colors on Helen seem to indicate she’s taking a risk and thus setting a plot point in motion. Here, she’s visiting Howards End at the very start of episode one. 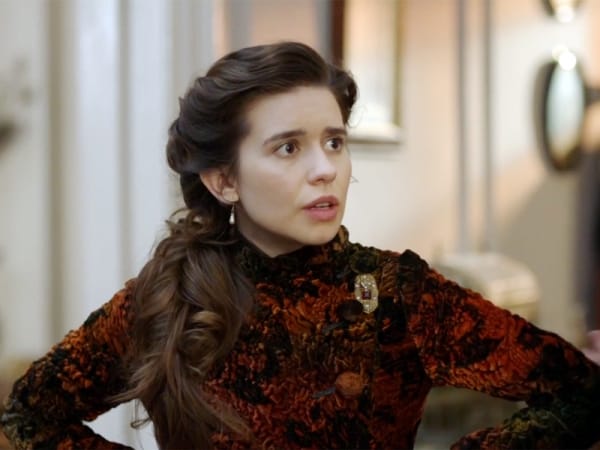 When Helen accidentally takes Leonard Bast’s umbrella and creates their fateful connection, she wears this reddish velvet blouse with a red walking skirt. 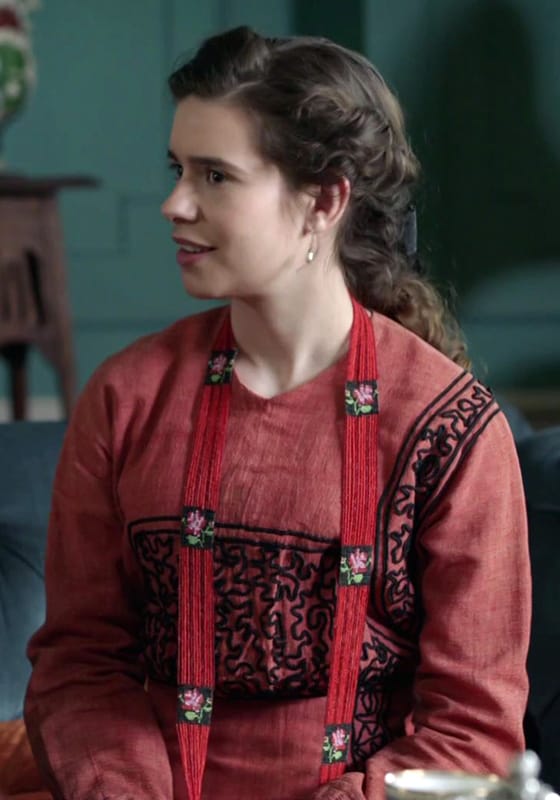 For tea with Leonard at the Schlegel house, Helen wears a fashion-forward (for this show) gown in red with embroidery. 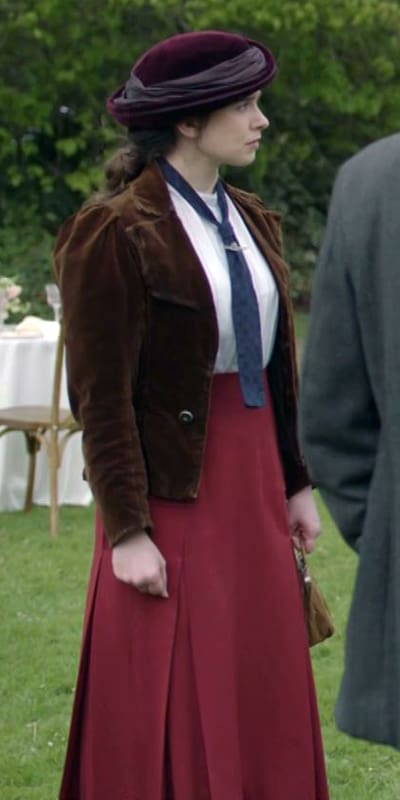 At Evie’s wedding, Helen wears only a little red in her skirt and burgundy velvet hat, but she also takes on her sister’s tie — now Helen is the free-thinking, independent one.

Starting slowly with Margaret’s engagement but especially with the scene where she accepts Henry’s apology and agrees, again, to marry him, Margaret leaves behind her New Woman uniform. Late in episode three and in all of episode four, she wears her version of the first Mrs. Wilcox’s wardrobe — aka, she becomes a typical Edwardian matron, conservative, elegant, non-threatening. Also, a bit higher class. 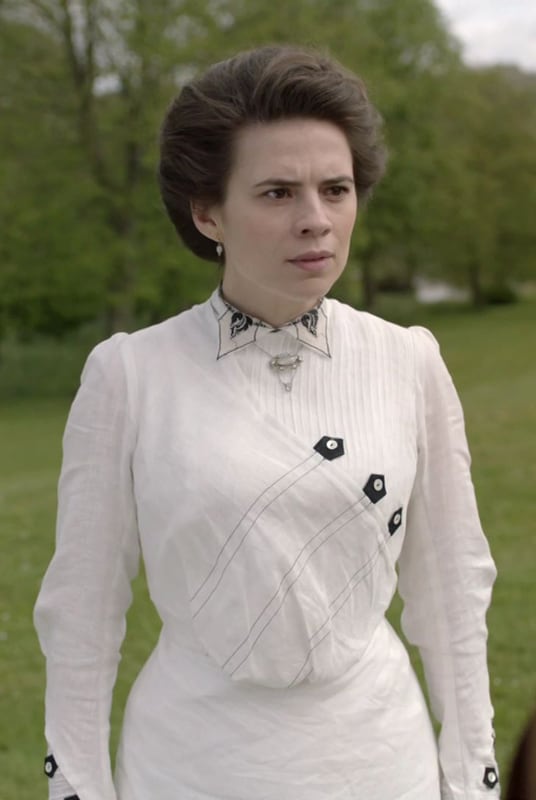 Margaret wears this to Evie’s wedding — it’s feels like a riff on the black and white gown in the 1992 film designed by the team of Jenny Beavan and John Bright.

In episode four, she armors up in this buttoned gown to deal with Henry’s infidelity. 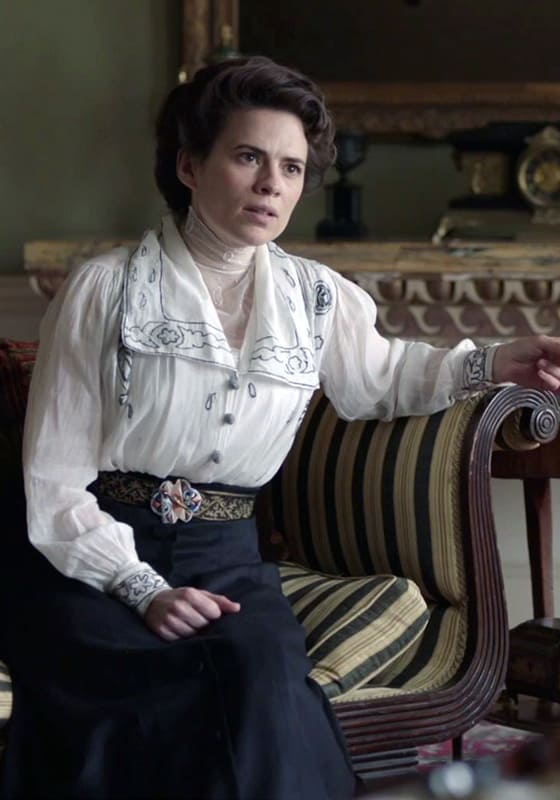 When she does go back to a blouse-and-skirt, the blouses are softer and fussier, and the details are more feminine. Gone are the ‘take me seriously’ stiff fabrics and ties. 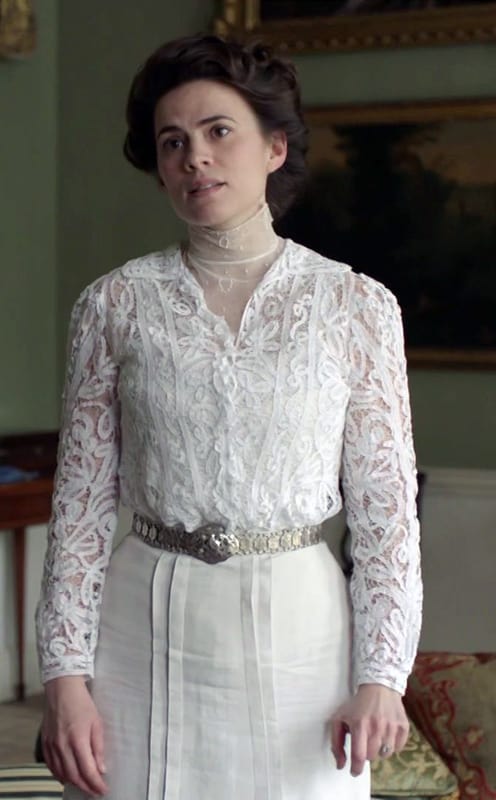 White lace blouse and white linen skirt — pretty much opposite from her look in episodes one and two.

Compare to Mrs. Wilcox (played by Julia Ormond) who is the very model of an Edwardian wife, so graceful and refined, wearing lace and a softer silhouette. 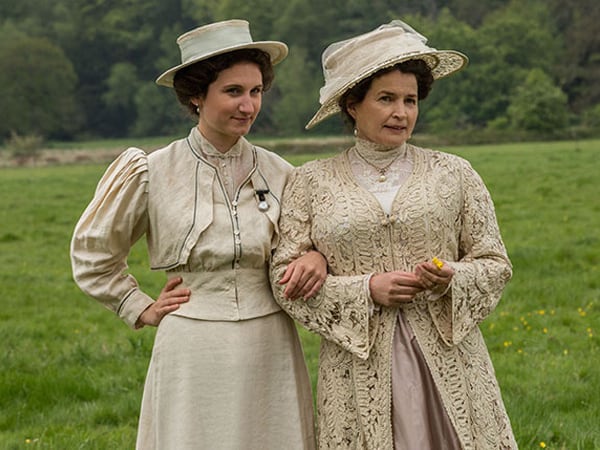 Mrs. Wilcox (right) with her daughter, Evie, wears a long lace duster, white blouse, and white skirt. Yes, it’s the country and all the women wear light colors, but scroll back up to Helen’s first red and white outfit. She’s not afraid to stand out. 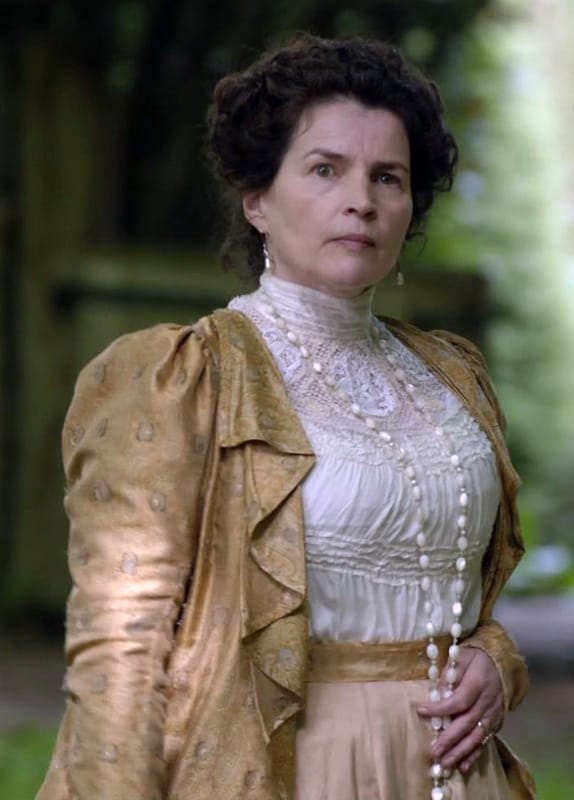 Still at Howards End but ever so elegant. 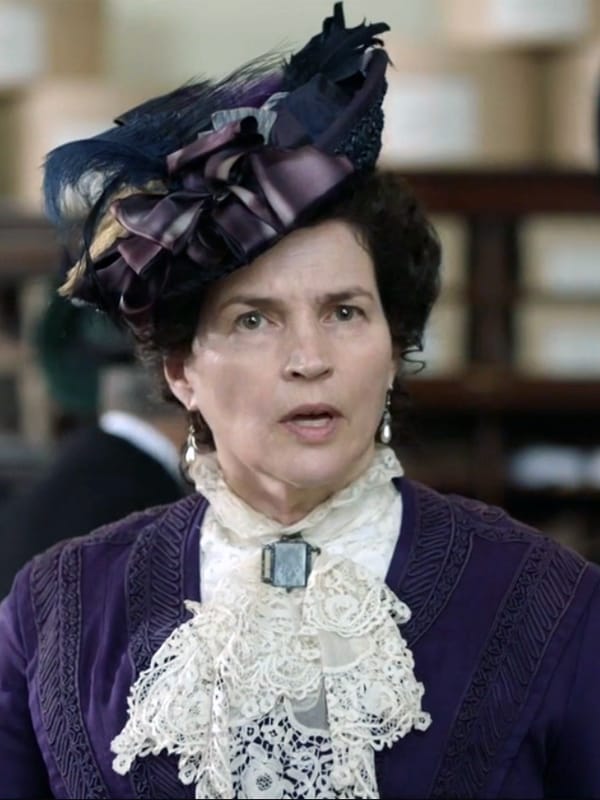 Mrs. Wilcox in a purple suit for her final scene, out Christmas shopping with Margaret. 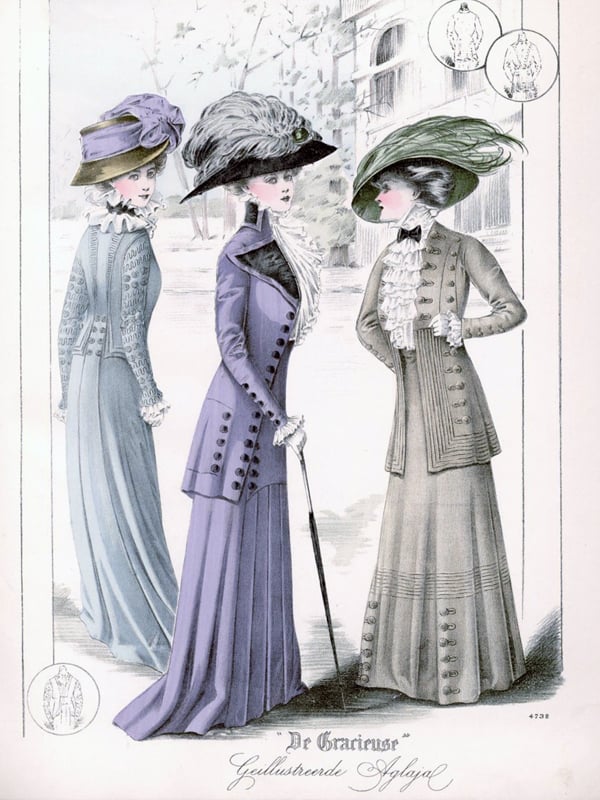 That final suit of Mrs. Wilcox’s (and the burgundy suit she wears at the luncheon) is similar to this 1900s fashion plate, except the hat is smaller. This miniseries has oddly small hats, btw.

Have you seen the Howards End remake? What’s your opinion?