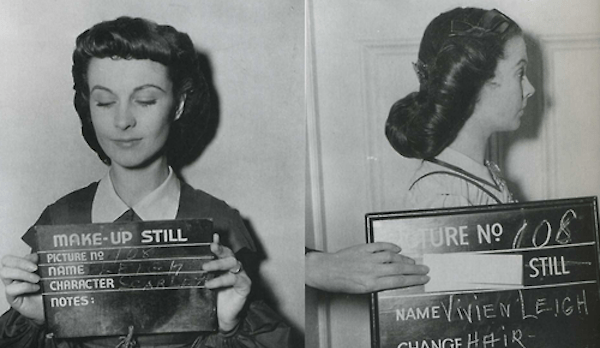 I was literally writing part 1 of this post — about how 1930s hairstyles affected historical styles seen on screen — on the day I was prepping for the Fêtes Galantes, a faaaabulous over-the-top costume event at Versailles. And I was on the world’s crappiest wifi! So I had to give up after covering films from the ancient period through the 18th century. Take a look at that first post for a bit about the trends seen in contemporary 1930s hairstyles, then join me as we look at hairstyles supposedly set in the 19th century:

The House of Rothschild (1934) is set in the early 19th century. It isn’t half bad — the braid around the head, the short, curly fringe — but those perfect sausage curls are totally 1930s and something we’re going to see again and again. 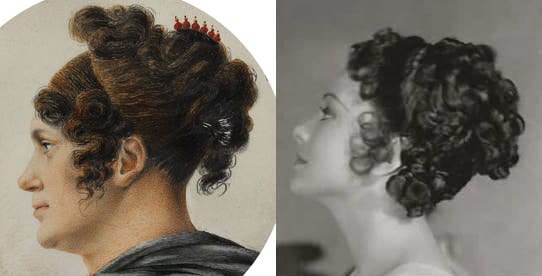 Anthony Adverse (1936) is another to do quite well at the overall silhouette of Regency hair. Other styles from the film aren’t quite so well done. 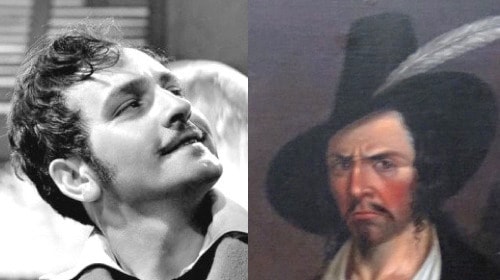 The Buccaneer (1938) is about Jean Lafitte, the early 19th century Louisiana pirate. It’s pretty hard to see what’s going on in the portrait of Lafitte (right), so I guess I won’t get too stressed about this brushed-forward ‘do?

Camille (1936) is a great example of the trend of reversing mid-19th century hairstyles, which were generally up in back and down (and curled) in front.

The Girl of the Golden West (1938) also reverses things, and the shoulder length hair is totally modern.

Smilin’ Through (1932) does it too. Okay, so the mid-Victorians loved them some ringlets, it’s true! 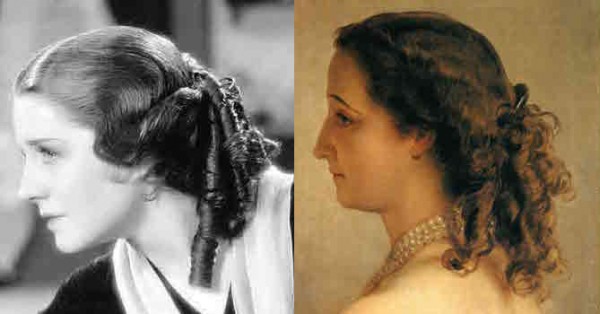 Ok, so Empress Eugenie of France (right) shows that these films, like The Barretts of Wimpole Street (1934), aren’t totally crazy. But up in front, ringlet-y in back is far too ubiquitous in 1930s films. 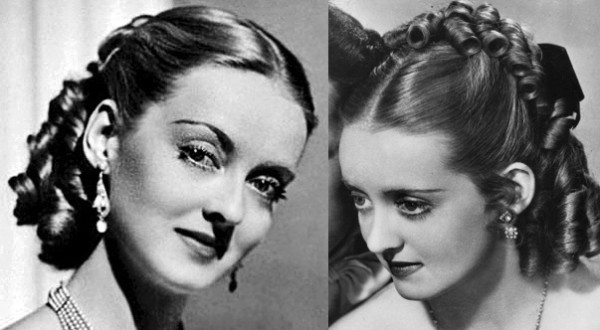 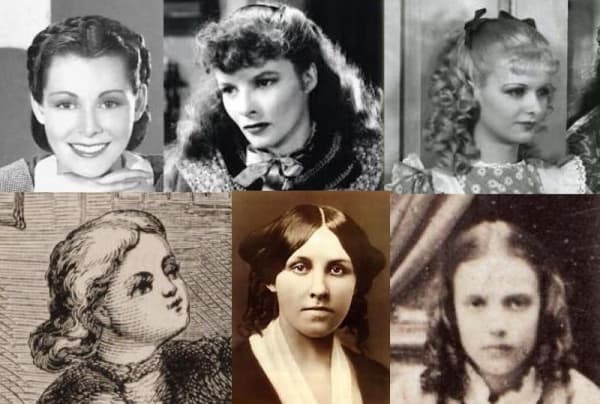 Oh, Little Women (1933). Beth (top left) isn’t actually half bad — compare her to this mid-19th century illustration of the very same character (below). But Jo’s short, curly bangs just did not exist in the 19th century, which was all about loooong hair (see the real Louisa May Alcott, center bottom). Of course, things aren’t helped by the fact that real-life actress Katharine Hepburn is and looks way too old to wear her hair down. As does the actress playing Amy — yes, young girls did go for hanging ringlets in the period. But that forehead fringe is totally modern.

Somebody over at Juarez (1938) did their homework! Compare Bette Davis to the real Empress Carlotta of Mexico… 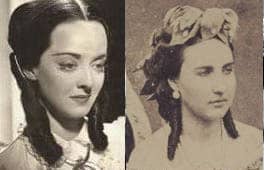 Gone with the Wind (1939) could really use its own post, but let’s start with Scarlett’s “I’m unmarried, so I wear my hair down” barbecue dress hair. Yes, very young girls wore their hair “down” in the Victorian era. But compare way-too-old-to-pull-this-off Vivien Leigh to Queen Victoria’s daughters in 1862 on the right, with only very-youngest Beatrice wearing this style. Neither Helena or Beatrice were married yet, but both wear their hair up.

Gone with the Wind (1939) again. Yes, nets (aka snoods) were popular in the era, and India Wilkes’s center part and fullness on the sides of the face works quite well!

I do like Scarlett’s married hairstyles, which have that low fullness and center part you see in the mid- to late-1860s.

Men’s hairstyles in the mid-19th century tended to be brushed forward with long sideburns, so I’m giving Leslie Howard in Smilin’ Through (1932) a pass.

And you see a range of hairstyles on men, and definitely the use of styling products. 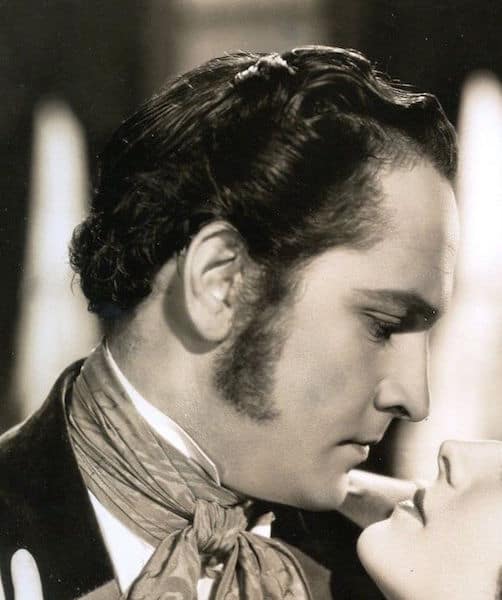 The Barretts of Wimpole Street (1934) went for it with the sideburns! 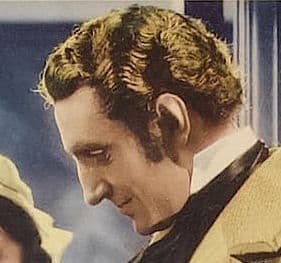 But the wave in David Copperfield (1935) seems somewhat modern to me. 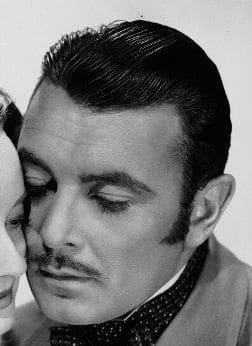 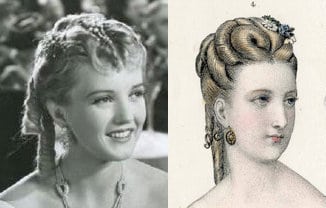 In Old Chicago (1937) is set during the Chicago Fire of 1871. And, points are definitely due for the center part, up in front, long ringlets in back look! 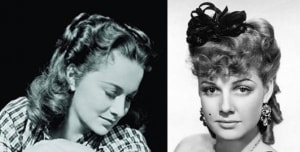 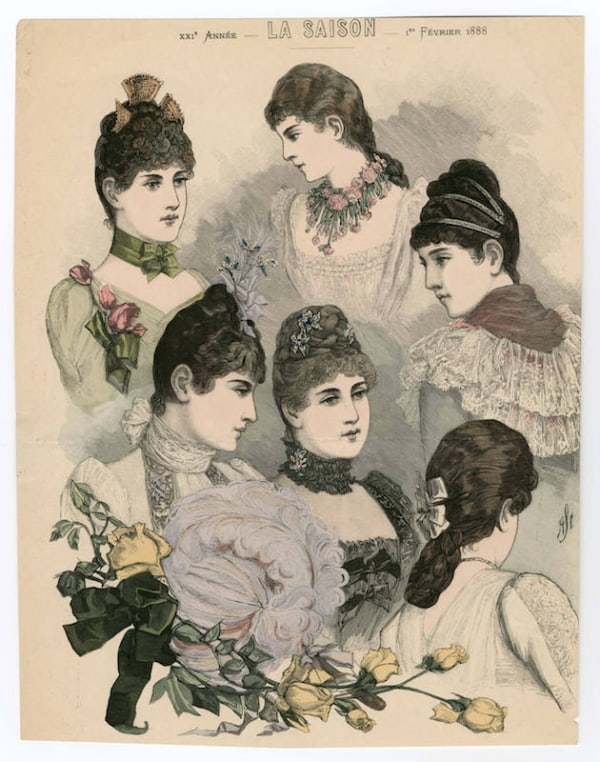 1880s-90s styles tended to be up high on top of the head, with very short bangs/fringe. 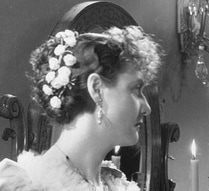 Anna Karenina (1935) got things right on this supporting character. 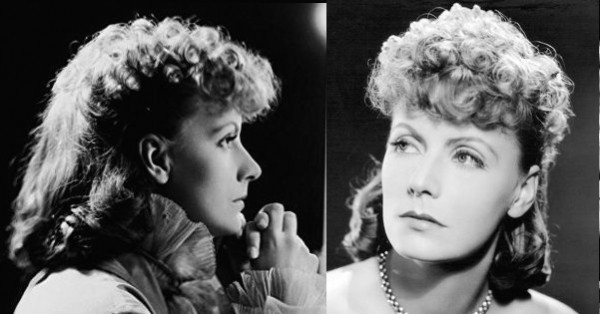 But if someone could PLEASE explain Greta Garbo‘s Anna Karenina (1935) hair, I’d be much obliged. So the short curls on the forehead work. But WTF with the shoulder-length, end-curled back?? 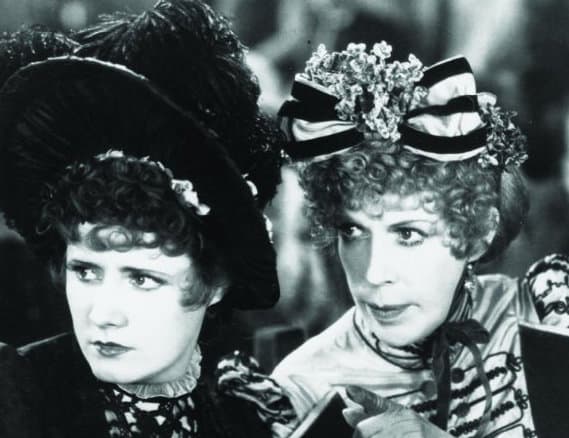 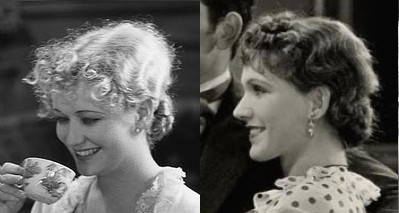 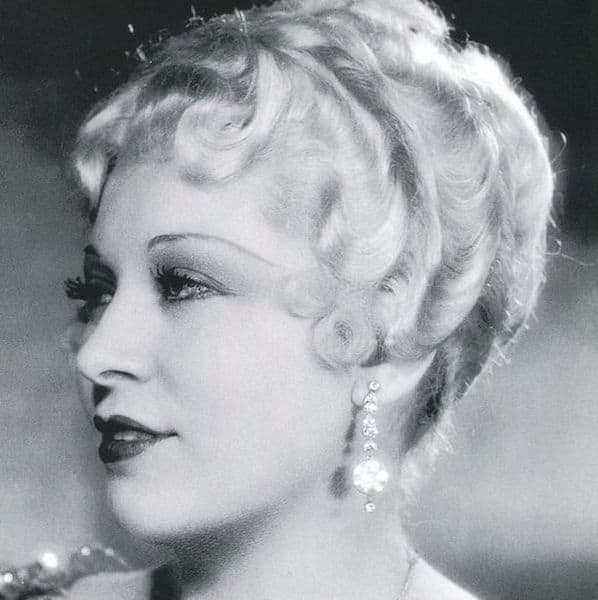 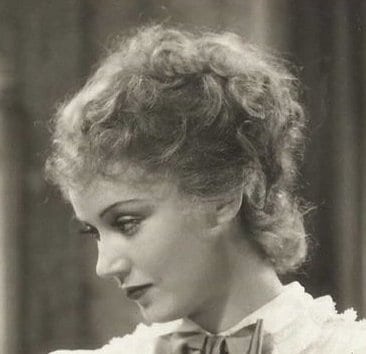 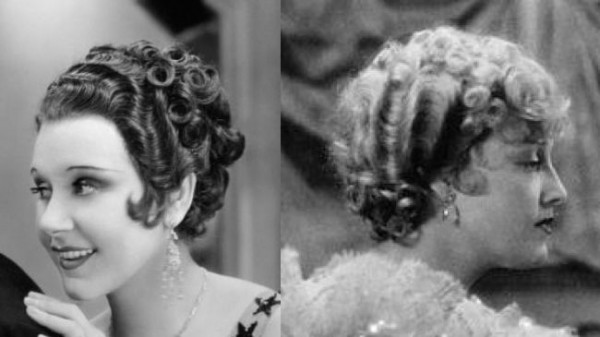 The Merry Widow (1934) is basically modern, finger-waved and pincurled ‘dos. 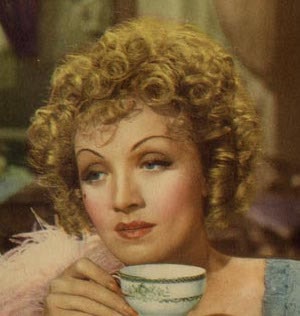 Destry Rides Again (1939): I have NO idea. It’s Marlene Dietrich, I’m sure there were clauses in her contract.

San Francisco (1936) is totally confused about 1906 hairstyles, which should be full around the face or on the forehead in the “pompadour” style.

A Woman Rebels (1936) — the hair on older-Katharine-Hepburn (far right) works?

Late 19th c. gents again show a range of hairstyles, but they tend to be shorter than those seen mid-century. 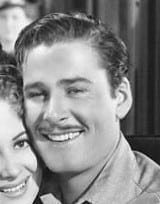 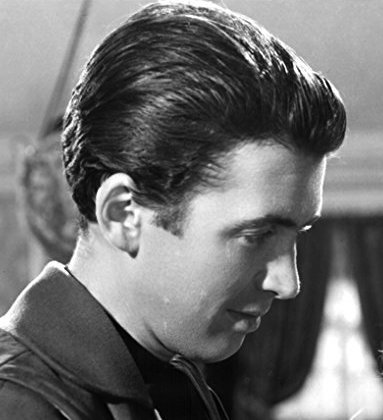 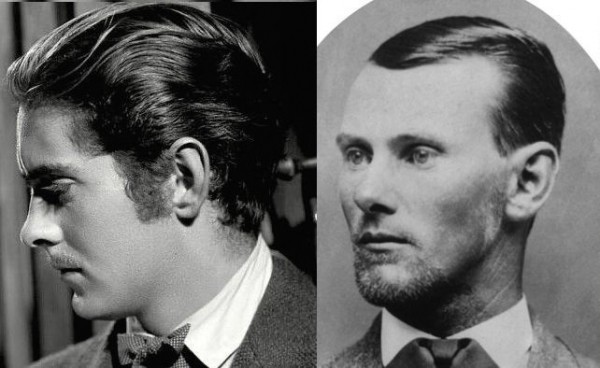 The real Jesse James went for slicked back/side and lots of product, so I’m okay with the style worn in Jesse James (1939)! 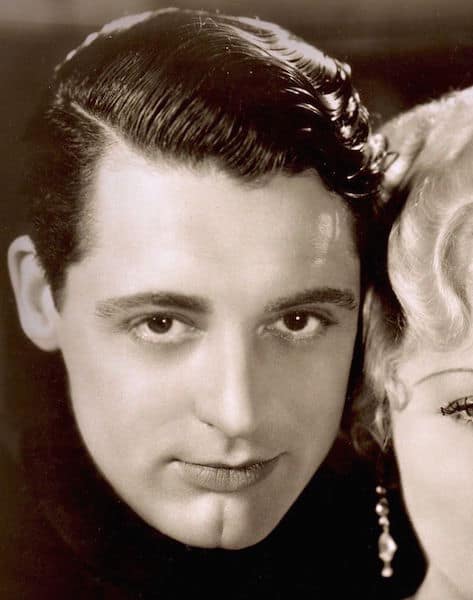 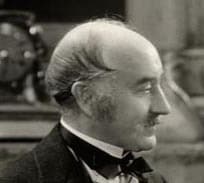 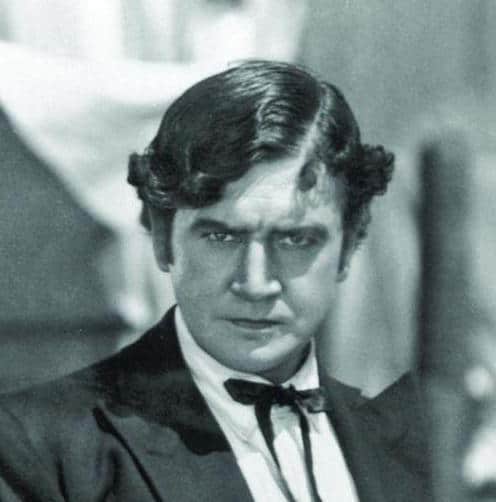 Cimarron (1931) – I’m actually kind of impressed they went for the slightly-long wonky look! 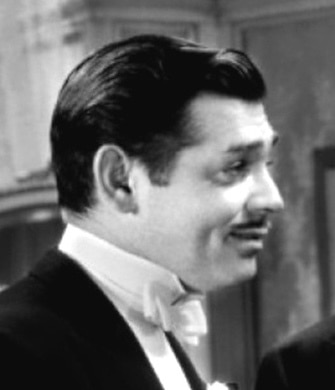 San Francisco (1936) is just Clark Gable being Clark Gable. Sure, I guess?

Which other 1930s films have hairstyles that need discussing?