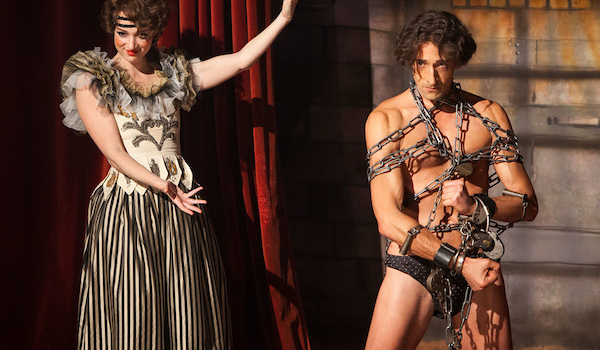 You know, one of the things I hate about watching historical movies, especially biopics, is I know that the subject is going to die in the end. And then I get all sad and cry because I am a giant softy beneath this cold, hardened exterior. I really strongly dislike having my emotions toyed with! So, a large part of the reason I dragged my feet for so long before watching Houdini (2014) was because I knew the series would end with him dying, and I knew that Adrien Brody, being such a fantastic actor, would make me cry, and then I’d feel like crap until I remembered that, dude, you knew he was going to die going into this.

So, I’ve been crying for a few minutes, because I just watched the second part (see part 1 here) of The History Channel’s Houdini and blah blah blah, Sarah really needs therapy. In a vain attempt to distract myself from feeling crappy, I’m going to try to refocus on what I came here to do in the first place: Review the costumes. 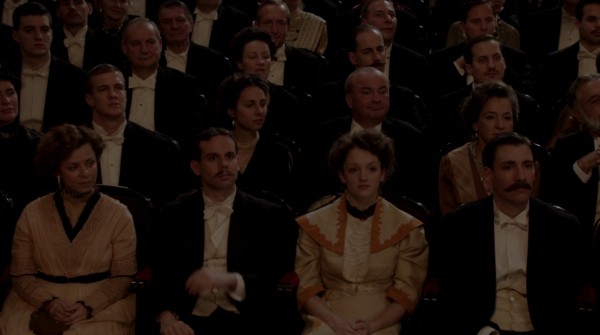 This image pretty much captures my feelings about the women’s costumes in the series. 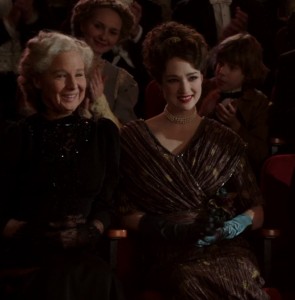 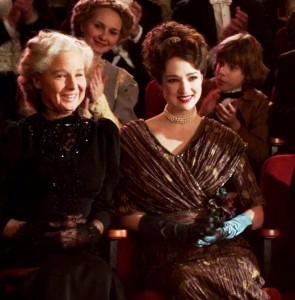 I really love this one, but once again, Bess is shown seated and in the shadows. It reminds me of a period gown, but I can’t put my finger on which one. 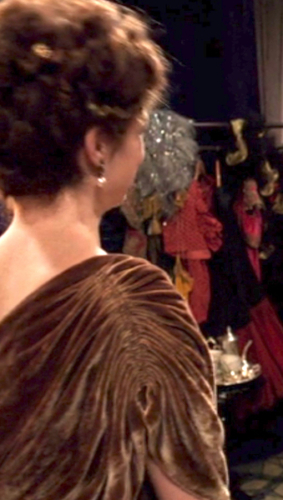 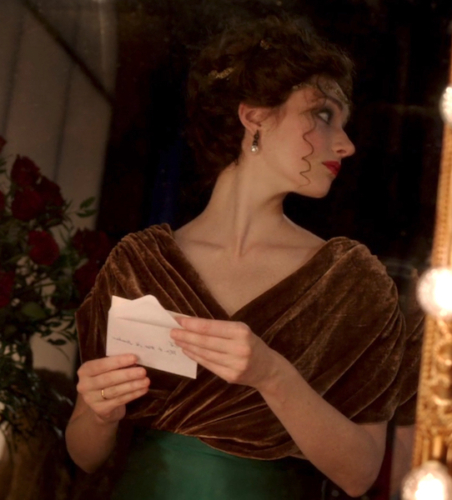 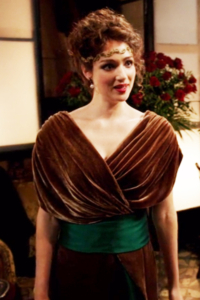 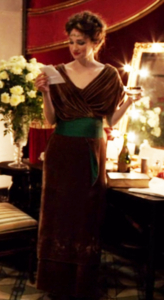 Another nice, simple dress that is probably a whole lot more fabulous in real life. Looks like silk velvet, sort of a Fortuny-inspired design. In the last image, I boosted the brightness way up and you can see it has a tiered skirt. I’d personally wear the shit out of something like this. 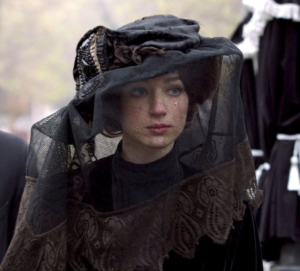 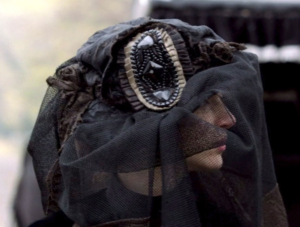 You can’t see a damn thing of her dress, but really, who cares? This hat is FABULOUS. 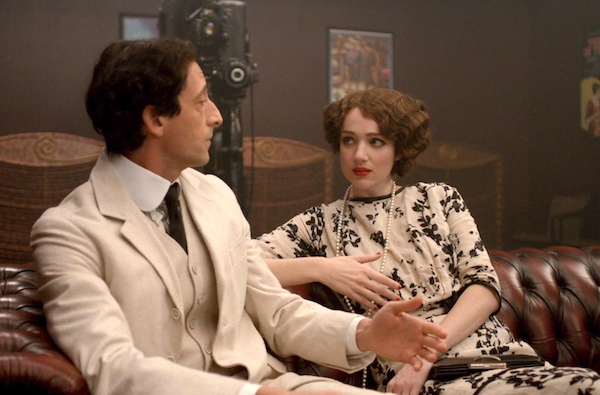 ARRRRGH! ULI EDEL, WHY DO YOU INSIST ON FILMING EVERY AWESOME DRESS BESS WEARS WITH HER SITTING DOWN??? 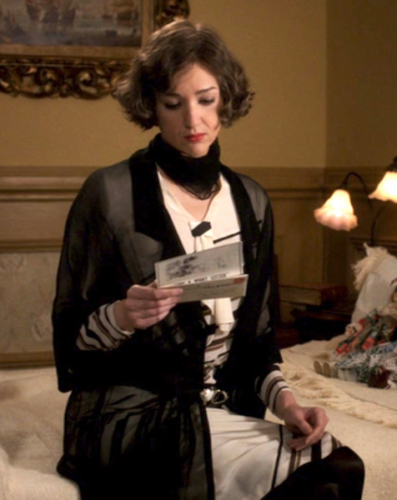 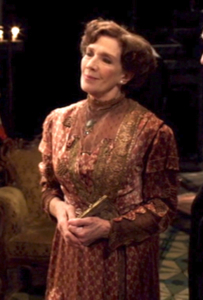 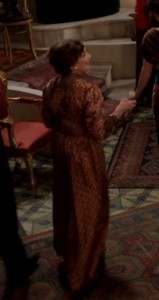 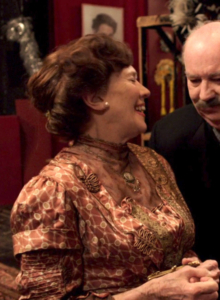 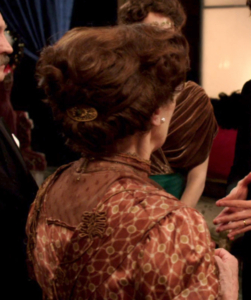 I get the feeling that this dress could actually be from the late-teens. Either that, or it’s one really well done repro. Loads of little detail, from the smocking on the undersleeves, to the piping leaf appliqués on the bodice, to the high-necked dotted net insert. 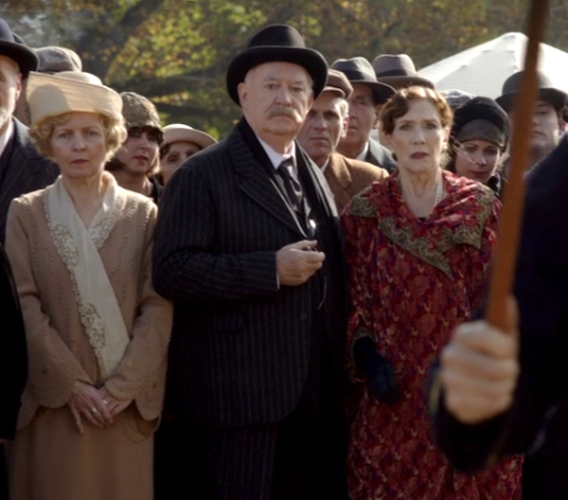 I really love the cocoon coat. Also, that woman to the left has a nice outfit. I’ve noticed a reoccurring thing with the female extras’ costumes — They’re almost always in light colors. They stand out in the crowd, while the principle female characters are almost always dressed in dark clothing. It’s a choice I find interesting… 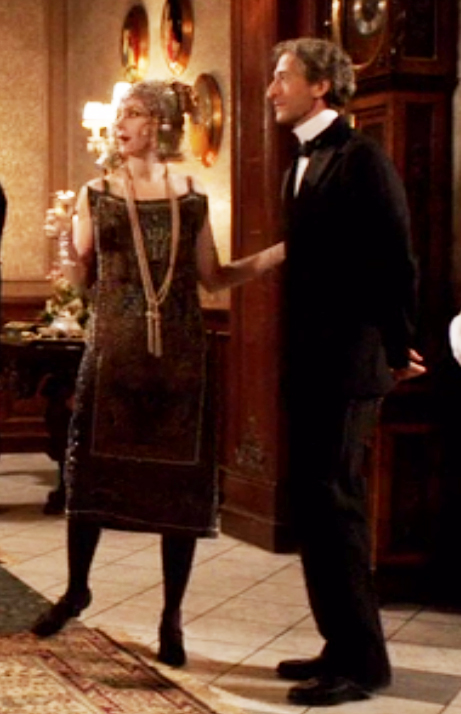 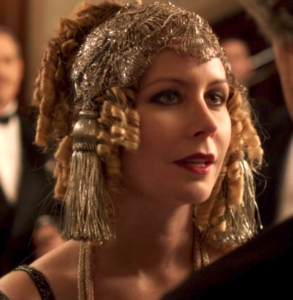 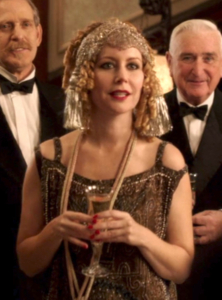 My bet is that this is a vintage piece. It looks too real for the usual type of 1920s dresses that show up in modern films these days (usually they’re variations on these). Also, I love the headgear.

So there you have it. Houdini is a mixed bag of emotions for me. On the one hand, Adrien Brody. On the other, there are like four female characters who get any meaningful screen time, and they’re always shot in the shadows in dark clothes.

Also, can I just have a slightly tangential rant for a moment? Earlier in Part 1, we see Bess attempt to get Houdini’s dander up by apparently smooching a British officer at Lady Butler’s reception in London (shown from Harry’s POV, across a crowded room, so there’s plausible deniability on Bess’ part when she insists later that she didn’t kiss him). Of course Houdini gets all pissed off and accuses her of being a horrible faithless woman and then launches into a nearly consummated affair with Lady Butler, who he decides at the last second to ditch.

In the second part, Houdini and Bess have a fight over his death-defying acts, because Bess is getting really tired of constantly living in a state of anxiety over whether or not her husband will kill himself every other Tuesday and twice on Fridays. She hurls an insult at him, and he storms off and lands straight between the legs of a groupie for some ego stroking. It is the most prolonged sex scene in the film, which really wasn’t that long at all, but compared to the scenes of Bess and Harry getting busy that fade to black within a couple of seconds after the first kiss, it really stands out. Anyway, Harry arrives back at their hotel room before Bess, and he has a moment where he appears to fear the worst, that Bess has left him. Bess, however, comes in the door a few moments later, having apparently gone out as well, and for a brief moment we are all left to wonder with Harry, if she, too, ran off and slept with someone. He asks her where she was with tears in his eyes and she says, “I was at church.” They embrace and … fade to black.

So here we have a married couple, and when the wife insults the husband either verbally or by flirting with another man, the husband storms off and sleeps with another woman. Like, what the fuck? How on earth does that make sense? I mean, the real Houdini actually had several affairs over the course of his marriage to Bess, and the whole scene with the British officer is based on an incident that may, or may not, have happened (sources vary) in which Bess decides to provoke Harry by kissing a British colonel which sends him into a spiral of depression so bad that he literally takes to his bed for several days and can’t bear to have the title “colonel” mentioned in front of him henceforth.

And yet … AND YET … he goes off and bangs whoever the hell he feels like. Because, patriarchy. And as if that weren’t bad enough, instead of showing healthy, normal, respectful sex between husband and wife in the show, the longest sex scene the audience gets treated to is Houdini humping a groupie. 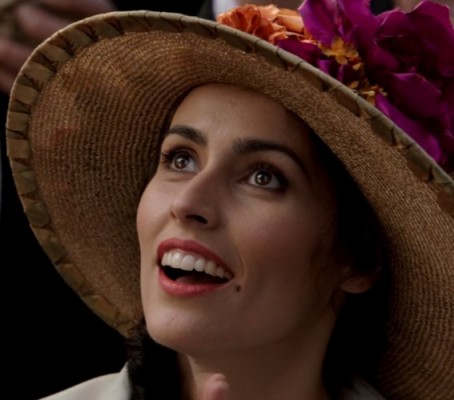 This groupie. There’s no accounting for taste.

Goddamn double standards piss me off.

Did you have mixed feelings about Houdini? Share them in the comments!